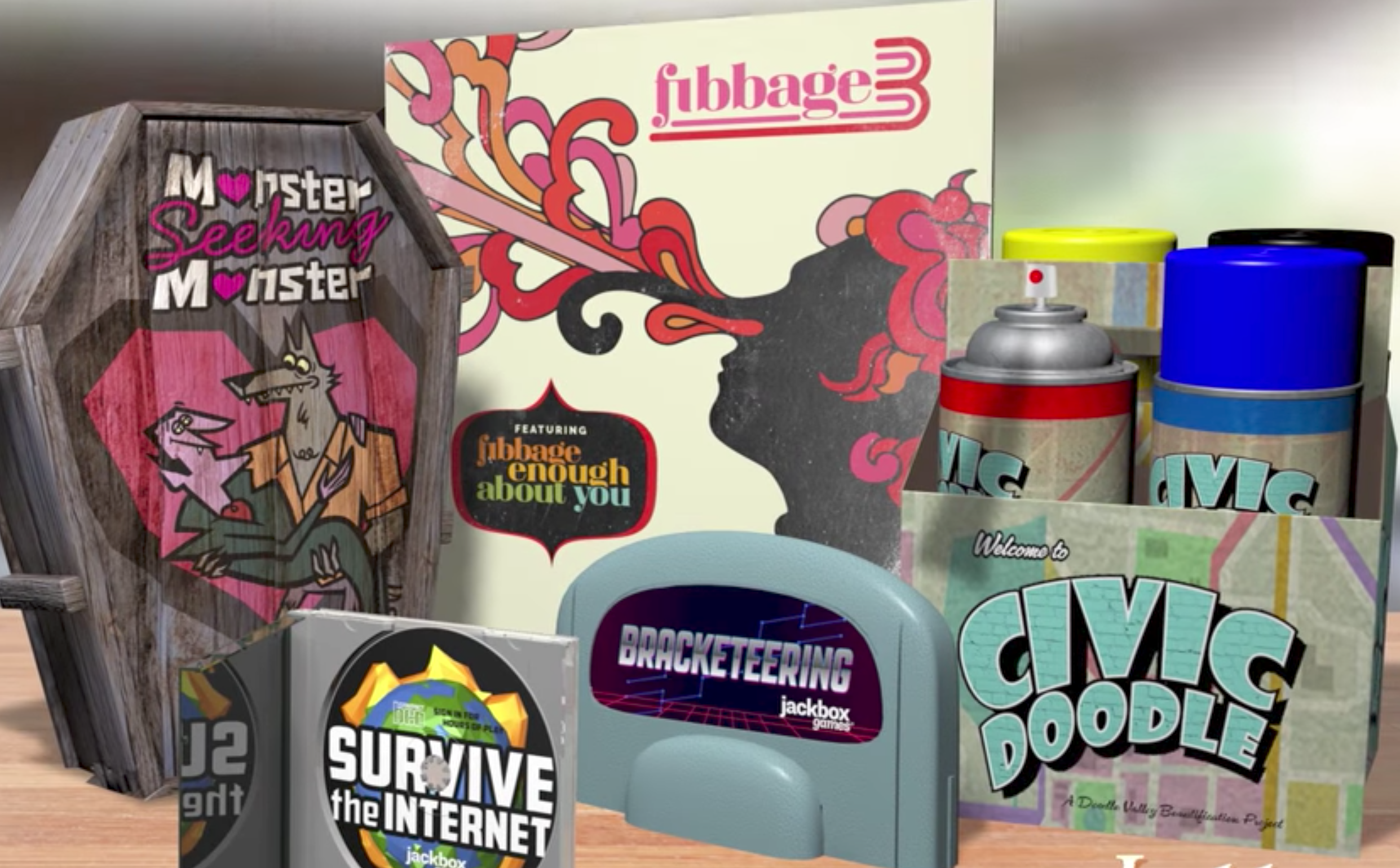 Friday party games have become a team-bonding tradition in my office. At the end of the week, we gather to test our wits, teamwork, and/or reflexes with all kinds of games, ranging from Cards Against Humanity to Snipperclips. Jackbox has become a fan favorite, and so we were elated when, this Friday, we settled in with sodas, snacks and four games from the Jackbox Party Pack 4 on the Nintendo Switch.

Like all Jackbox games, the gaming console acts as a hub, while players interact with their smartphone, tablet, or computer by going to jackbox.tv and entering the room code. This interface is simple and familiar, though we did experience a few glitches, from graphics routinely failing to load, to a device being kicked off the network without warning, simple things that will hopefully be patched up before launch. Jackbox 4 comes prepared not only with new games, but with the ability for an even bigger group to play, one title allowing up to 16 people to play at the same time.

Monster Seeking Monster
We started off the party with Monster Seeking Monster, a surprisingly complex pseudo-dating game with a monstrous twist for three to seven players. You enter a pseudonym, pick a portrait, and are told what kind of monster you are. There’s quite a bit of variety, from puppets to zombies to body swappers, each with their own, unique power and goal. Each round, you can send in-app text messages to other players, trying to convince them to go on a date with you. You’re only able to send four texts, though, and the time for romance is short. In all honesty, this part of the game was confusing, highly restricted, and more than once resulted in frustrated players shouting across the room, “KAY, JUST DATE MEEEEEE!!!”

Texts sent, you then pressed a button to say who you’d like to date, and if that same person decided to date you, success, you make suggestive faces and your portraits are ushered off the screen together for a night of… these were my co-workers, I’d honestly rather not think about that. Successful hookups also had their text conversations shared with the entire audience, something which resulted in a few awkward moments, and required schemers to use a bit of tact when making their arrangements. Everyone who hooked up got a heart, and the player with the most hearts at the end wins.

Even all of that is a bit complex for a party game, but Monster Seeking Monster had more in store. Monster powers can impact hearts and alter scores. After the second round, the monster identity of each player began to be revealed one by one, which changed the dynamic of the dating scene further. The zombie turned everyone he hooked up with into a zombie, who in turn would turn everyone they hooked up with into a zombie, granting the original zombie extra hearts for each zombie hookup. I was the mother of monsters, and gained a heart every time I prevented my child, our intern in the case of this game, from getting laid, so I spent the entire game trying to not only get some, but to keep someone else from getting some.

It’s a fun game, but it’s a lot, more than most of our rowdy Friday crowd wanted to deal with. This game is interesting, and once you’ve played a time or two and have figured out the peculiarities of the game and learned all the monster classes and powers, it becomes a fun tactical social game. That said, it feels a little out of place and too complex when compared to the other Jackbox games.

Survive the Internet
Given that I work at an Internet company, Survive the Internet was the most anticipated of the new titles. Three to eight players are sent different prompts, ranging from “How would you describe Porky Pig?” to “How would you describe your hair dresser?” Those descriptions are then sent to another player, who is prompted to take those words out of context and turn it into something horrible. Sometimes you’ll be prompted to create a headline for an article, sometimes you’ll add a hashtag to twist the meaning.

Because these quotes are sent without the context of the original prompt, replies can seem incredibly horrible very quickly. The phrase “kids should be shot” is a lot more horrifying without knowing the original prompt of “What do you think of people who don’t vaccinate their kids?” Person A may describe firefighters as “Focus, agility, proficient at pole sliding,” but when sent that description, Person B decided those qualities made a great LinkedIn bio for Anchovie the Stripper. It’s an incredibly fun game, though some parts of the game are more entertaining than others. In one prompt, you’re given a photo and told to write a caption as if you were another player. Some make for a great setup, while some of the photos, like a spider weaving a web, are a little more challenging.

Civic Doodle
Drawing games are a favorite in the office, so we were eager to check out Civic Doodle, a drawing game which challenges three to eight players to collaborate and create murals around the city. This was surprisingly complex and challenging, and the first round was all but catastrophic, as we didn’t realize we needed to plan ahead for a much longer game. Two players are presented with a canvas already marred by a few lines, and are given an incredibly short time window to add to the mural. As they draw, other players can spam emoticons, showing their approval or disdain of the works in progress. Once time is up, everyone gets to vote on which of the two images they like more. The winner gets points, then the mayor, an unseen NPC in the game, will break the tie, if necessary, and pick a random emoticon, awarding that drawing extra points.

The next two players are then presented the winning drawing and are once again prompted to add to it. This image is passed back and forth a few more times, so if any one person adds too much, the image quickly becomes a tangled jumble of lines and colors. The final product is then superimposed onto a photo of a real location, (e.g. our drawing of a sword and a hairy butt ended up on the wall of an elementary school) and everyone submits a title, the most popular one earning extra points. Given how quickly the drawings became an unmanageable mess, a bug which kept loading screens up for nearly half of the allotted drawing time, the fact that half-finished versions, not the final product, of pictures often appeared at the start of a new round, the random nature of the Mayor’s choices, and just how long rounds dragged on, this quickly became the least popular title of the group, and the only game we actually shut off before completing.

Bracketeering
While most Jackbox games cap out at eight players, newcomer Bracketeering can host up to sixteen players at one time, and whizzes through rounds in lighting fast, entertaining two-on-two showdowns, creating a surprisingly big but fast game. Players are prompted to enter a name, word or phrase based off of a prompt, the fewer players, the more each player will be prompted to enter. The game automatically fills in the gaps caused by odd numbers of players or someone failing to answer, then pits answers against each other in one vs one battles, moving through brackets until one answer is judged the winner.

Set atop retro 80’s sci-fi style graphics, players are presented with one matchup before the round begins, and are able to pick a favorite, earning bonus points if their pick wins the match. Players within the appropriate bracket are able to vote for their favorite answer, and ties are settled as players “mash their phones like idiots,” as the game itself describes it. Players receive points each time one of their answers win.

Things get really interesting in the second and third rounds of the game, when ‘blind brackets’ come into play. During these rounds, players will be given a prompt, like “name a celebrity,” and will receive the topic, such as “Best voice to always hear in your head as your inner thoughts” after the fact. In the third round, the prompt changes after each bracket has been decided. While your answer may have been perfect to win “A quote sure to make you lose a political debate,” it may not be the best reply to “A great yelp review.” It’s fun, it’s fast, and it caused people to shout, rallying support for their favorite answer more than once.

Fibbage 3
The classic Jackbox game, Fibbage has received a facelift, some gorgeous surreal graphics, and taken on a whole new life in Fibbage 3. This Players are prompted to pick topics, and everyone is given a fact, with a key word or two blanked out. Each player enters an answer, the more believable sounding the better, then the true answer, alongside all the lies, are placed on screen. Everyone picks the answer they think is true, and are given the option to give a like to any answers they find especially funny, then the picks and the truth are revealed. Players are awarded points for everyone who mistakes their lie for the truth, and bonus points for picking the correct answer. It’s fun, it’s fast, and it results in no small bit of gloating, both for fooling others and for knowing the right answer to a trivia question.

Monster Seeking Monster isn't the same pace as most of the other party games, it's a great source of fun for those who enjoy games featuring strategy and social manipulation. Survive the Internet reveals just how terrible your friends are, Bracketeering provides fast paced fun for a whopping sixteen people, and Fibbage 3 allows you to show off both your trivia knowledge and your ability to fool your friends. All in all, the Jackbox Party Pack 4 is a great party game bundle with far more hits than misses.