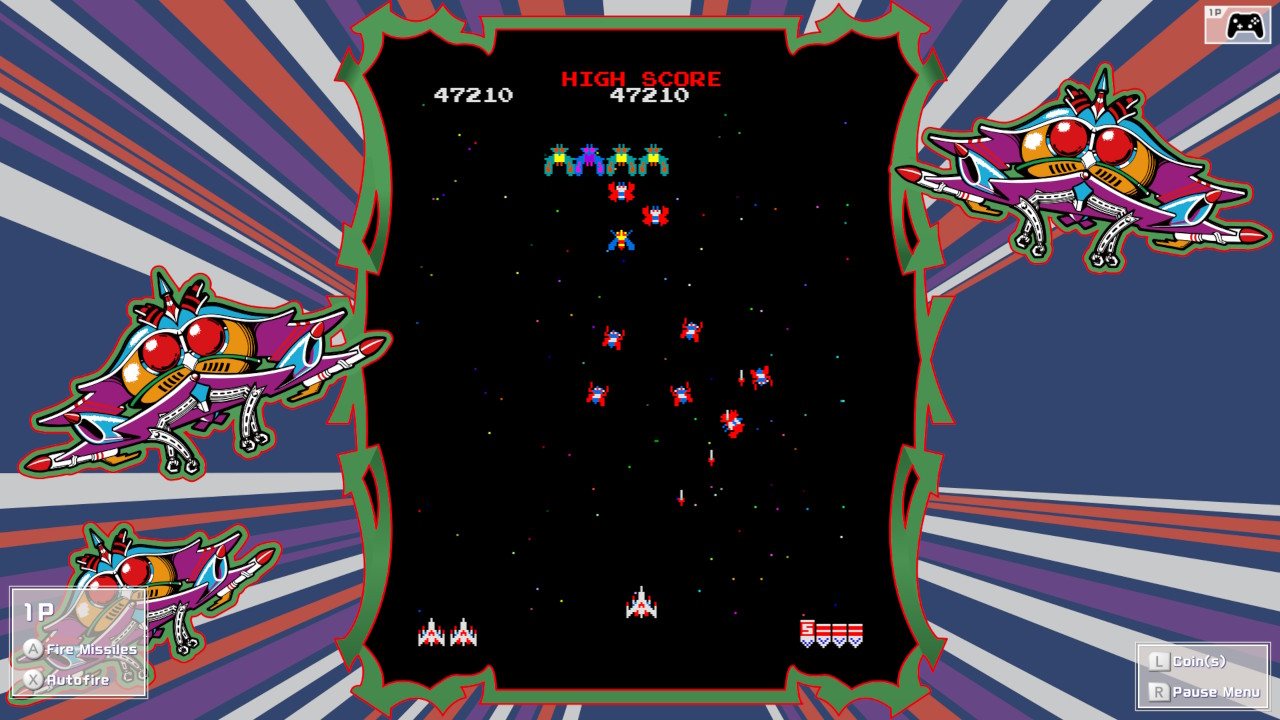 Namco Museum seems like one of those games that was on every console. There are 5 entries on the original Playstation, as well as compilations on the Nintendo 64, Gamecube, Playstation 2, Xbox and more. Each release brought a new mix of games along with the familiar trinity of favorites, Pac-Man, Galaga, and Dig Dug. After a 7 year hiatus, Namco Museum lands on consoles again with an 11-game compilation for Nintendo Switch.

As is expected with a Namco compilation, Pac-Man, Galaga, and Dig-Dug are all available, but there are a few unexpected additions that have never been seen in Namco Museum before now: Rolling Thunder 2, Tank Force, and Splatterhouse.

Unlike previous releases, there are only two variants of Pac-Man this time, Pac-Man and the incredibly different, but incredibly interesting Pac-Man Vs. Pac-Man Vs., developed by Nintendo, was originally packed in with the Player’s Choice version of Pac-Man World 2 for the GameCube. In Pac-Man Vs, you and up to three other friends take turns either playing as Pac-Man, or as a ghost trying to take him down.

This is done using two Switches via a free app available on the eShop. One player downloads the multiplayer app while the other player plays from the full Namco Museum game. The goal of the game is for your Pac-Man to reach a certain amount of points. It is ideal for one of the Switches to be on the TV, since all three ghosts will be sharing a screen. The dual-screen method is done to prevent the ghosts from seeing where Pac-Man is hiding. Once he is caught, Pac-Man is handed off to another player at random. Think of this as a Pac-Man version of Nintendo Land’s Mario Chase. Honestly, this game would have been more appropriate for a WiiU, but you can still play it with just three ghosts on a single system if you don’t have any other Switches lying around.

Galaga doesn’t come alone this time either. An updated version of the game called Galaga ‘88 is also included. It plays extremely similar to its counterpart, but you can have up to three ships combined at once (instead of Galaga’s normal two) when they are captured. The visuals are also impressive for it being a 1988 videogame.

For the first time in Namco Museum, 1990’s Rolling Thunder 2 is available. This game plays similarly to its predecessor, but with a new character, better visuals and more impressive backgrounds. You play as either Leila or Albatross in a run and gun action style, armed only with a single pistol. You must shoot enemies before they shoot you, causing you to go further back in the stage, or end the game if you run out of lives. Going into doors will earn you new weapons, making it easier to blast your way through its 8 levels.

Also new to Namco Museum is Tank Force, a two player tank game where you and a friend defend your base from an onslaught of opponent tanks. You can shoot the terrain to make paths towards the enemy or take the long way around. The game seems to be heavily focused on being “co-operative competitive” because of the screens showing who was the most successful. Because of this, the game isn’t as thrilling alone.

Finally, we have Splatterhouse, a gruesome game that took me completely by surprise and is the sole reason for the game’s T rating. In Splatterhouse, you play as Rick, who has been trapped in a scary mansion and awoken in its basement with the “Terror Mask” on his face. Splatterhouse is a classic beat ‘em up where you fight monsters as you go through the rooms of the house, using your fists or any weapons you find on the ground. Using weapons, these enemies die in incredibly violent ways such as decapitation or being splattered against the wall. In a way, I’m surprised this didn’t bump the game up to an “M” rating. But the game is definitely fun and challenging.

As fun as the other games were, I couldn’t bring myself to enjoy Sky Kid as much as I wanted to. Sky Kid is a game where you play as The Red Baron and Blue Max, pilots fighting through enemies to complete their mission: bomb the crap out of their target. First, you have to take off into the air, then you have to fight through waves of enemies, next you pick up the bomb, and finally you drop it on your target before landing safely. If you’re hit by anything, you can hold up and mash your fire button to regain control of your plane. It’s difficult not to get hit, however, as you can only shoot in front of you unless you do a loop. This causes a lot of awkward instances of enemies being behind you, putting you in a hopeless position more than would be necessary.

Tower of Druaga is also available in this collection, but as far as I can tell, the two additional towers found in Namco Museum Vol. 3 did not make their way in. Fortunately, Tower of Druaga isn’t as cryptic with its treasures this time as the in-game manual can be accessed at the push of a button and tell you how to get each item and what they do. How the heck was I supposed to figure out that running into a wall and then going back the way I came would unlock the chest on my own?

While 11 games isn’t a lot for the value, each game (besides Pac-Man Vs.) does come with a single challenge and leaderboard. Unfortunately, the challenges are shallow at best. For example, the Pac-Man challenge has you eating as many ghosts as you can in 3 minutes, while the Galaga one has you see how many times you can have your ship captured then rescued. It would be better if there were more challenges per game, similar to NES Remix’s challenges.

The intention is to play these games on a more natural screen, but it’s difficult to play with the screen rotated. The Switch has a nice kickstand, but this kickstand is only for playing if the screen is facing the “correct” way. If you try to flip it on its side, the Switch falls over, which is of course not Bandai Namco’s fault.

For the first time in 7 years, Namco Museum is back on home consoles, but it could have had a better return, especially for its price. $30 only gets you 11 games, most of which have been ported so many times that we’re almost getting tired of playing them. If there were more games in the collection, this could be an amazing collection. But, for what we have, they’ve definitely tried to make the presentation worthwhile with 10 of the games having their own leaderboards and each game having a very detailed manual.

Namco Museum for the Switch is a great attempt at a collection of classic arcade games. Fighting to become the top score on the leaderboard is fun, even if the other challenges often come off as shallow. With the detailed manuals and the great display options, adding a few more games, or even more challenges could have made this the definitive Namco Museum.

Sean Anthony likes to combine two of his passions: gaming and writing. Gaming has been a huge part of his life ever since he played his first game as a child, Kirby's Adventure. He aspires to have his name attached to an article that makes the whole world go, "Huh, that's neat, I guess."
Related Articles: Namco Museum
Share
Tweet
Share
Submit