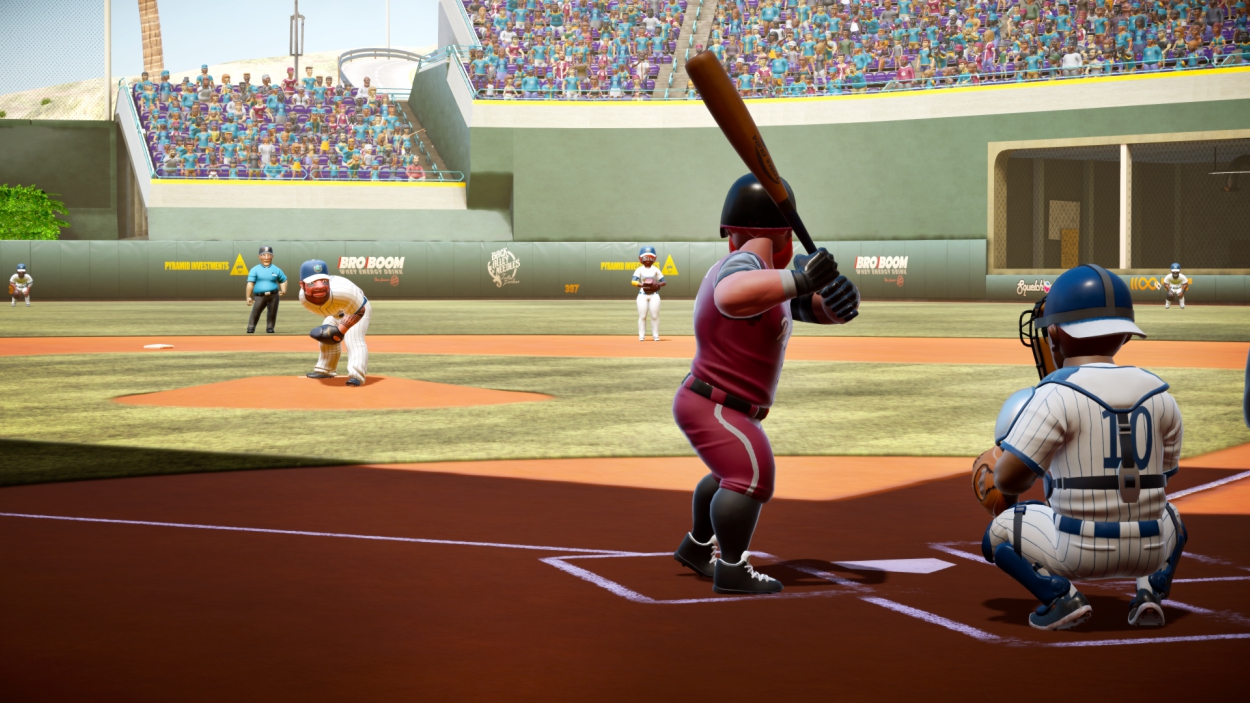 It has been quite some time since I’ve played a baseball video game. Since Playstation has MLB the Show as an exclusive, I haven’t really looked to play anything else, until I started to play Super Mega Baseball 2. This arcade style baseball game brings all the mechanics of a great baseball game and throws it into a fun and easy to learn experience.

To put it simply, Super Mega Baseball 2 is great fun! The smooth pitching and batting controls make the game feel just as precise as an MLB title game. Whether you are pitching or batting, you have the option to make a simple throw/hit, or you can use a power throw/hit to add a little more oomph to your action. The power throws/hits require your timing to be more precise, as you have to follow your players wind up or step in to get the most power possible. It was really nice to see the attention to detail the game brings with each characters movements. Many of the characters have varied pitching and batting styles similar to real life players.

The gameplay is very well paced, and allows you to taylor the game towards your own skill level. The skill settings go by a number scale called your “Ego.” Your ego lets you change the games difficulty while in the main menu or even mid game. Like any game, as you get better the easier a game gets; this feature is great to provide more of a challenge if you are beating the computer by 20 in the 3rd inning. In the same sense, if the game is way to hard you can bump your ego down a bit to make the game feel a little more even sided. Your ego doesn’t just play towards the games difficulty, but it also determines the amount of star points you can earn in a game. Star points are a cool feature that really ties in the arcade feel to SMB2. With every hit, strike, catch, or stolen base, you are awarded points that go towards your game score. I found myself trying to beat my high score in each game I played, earning more points for my actions, especially whenever I would make the game’s difficulty harder.

The difficulty isn’t the only thing that can change the outcome of a game; while playing you may notice above your characters heads they might have the word “Mojo” in red or green appear after getting a strike out or making an error. It’s pretty self explanatory, but green mojo is better than red mojo. The more green or positive mojo your player has, the better they will play. I saw this when my pitcher was still throwing consistent pitches, throwing a no hitter going into the 9th. The red or negative mojo can cause your players to make more mistakes on the field, walk batters, or lob a pitch down the middle letting up an easy home run. This feature made the game feel more like an MLB game giving each character their own personality depending on how they were playing.

The downside to this game is that you can’t play as any major league teams, which is a shame because I would have loved to see some of my favorite players in this cartoon art style. The team names, player names, and logos are silly but fun. SMB2 felt and looked to me like a Backyard Baseball title 20 years later. Every team has both men and women on it with ridiculous names. I played as the team “The Blowfish,” where I had a character named Keg. It brought me great joy to look through the team rosters just to see the names of the players. This subtle comedic vibe gave the game a more welcoming tone, and reminded you that this game was meant to be fun.

Aside from the playing the computer through a quick play, tournament, or season; you can take on friends through an exhibition or online play, and. I want to point out that the online play has cross-platform capabilities. This was really nice to see, allowing me to open up my world of opponents to every platform not just Xbox. I did notice that I had a hard time finding online matches;. I would constantly get connection issues or just be unable to find a match. Normally I would blame it on my internet, but I wasn’t having issues with any other game. This wasn’t too much of a problem though, because the core game is so much fun. It is always nice to play a game offline from time to time, bringing you back to the days when there wasn’t much in terms of online play.

Super Mega Baseball 2 brings a great amount of arcade fun to this historical sport. With great mechanics and pick up and play gameplay, the game keeps you entertained and engaged. Since there it is not an MLB game you can’t use real players or teams, but that doesn't stop the game from holding up as a respectable title.

From Southern New Jersey, Shaun has always been a huge fan of video games as well as nerd, geek, and pop culture. No matter the topic of conversation, Shaun can always find a way to slip in a movie or TV quote to get a laugh. When he is not playing games or watching shows, Shaun works as a substitute teacher during the day and as a bartender at a local brewery on nights and weekends.
Related Articles: Super Mega Baseball 2
Share
Tweet
Share
Submit