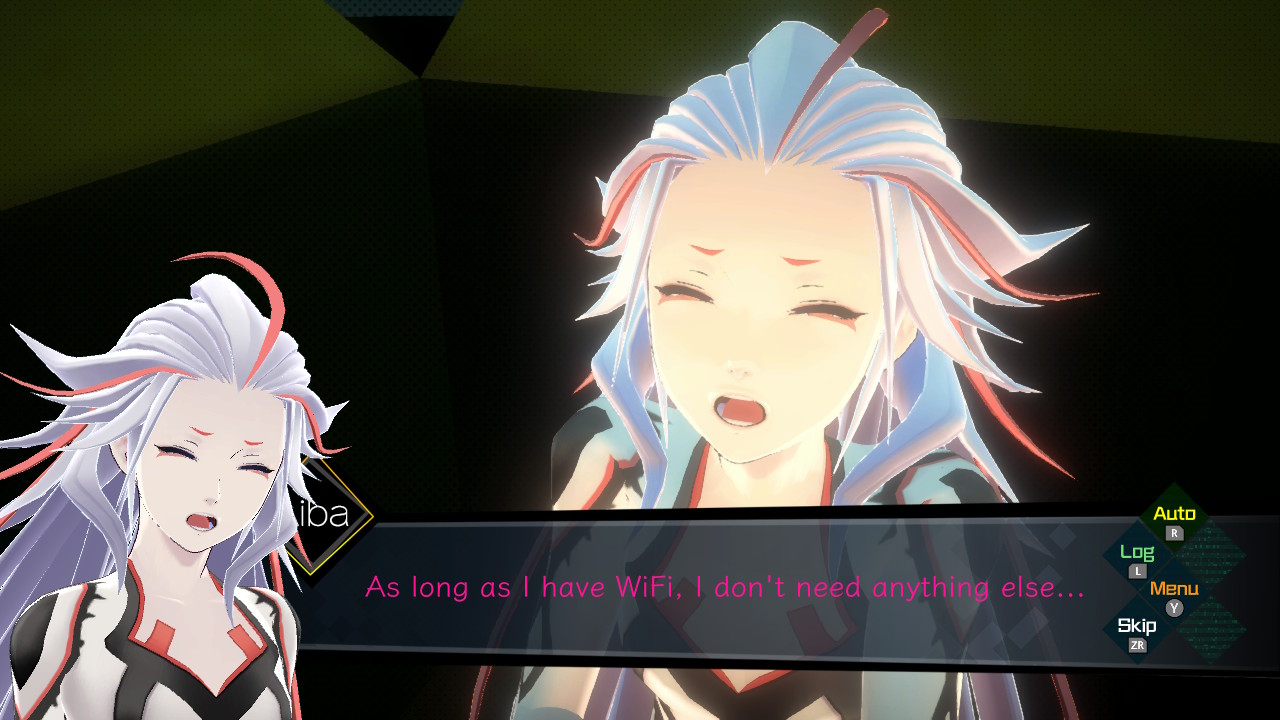 I’m impressed with how far visual novels have developed in the past few years. With delightful overhauls like Steins;Gate Elite to new traditional fare like Raging Loop, visual novels have slowly but surely made their mark on the niche gaming market. For those that wanted something to fill the void that the Zero Escape series left when it ended, Spike Chunsoft released AI: The Somnium Files, a delightful visual novel with adventure and puzzle elements along with a memorable cast, gritty and giddy story, and fun riddles to solve. 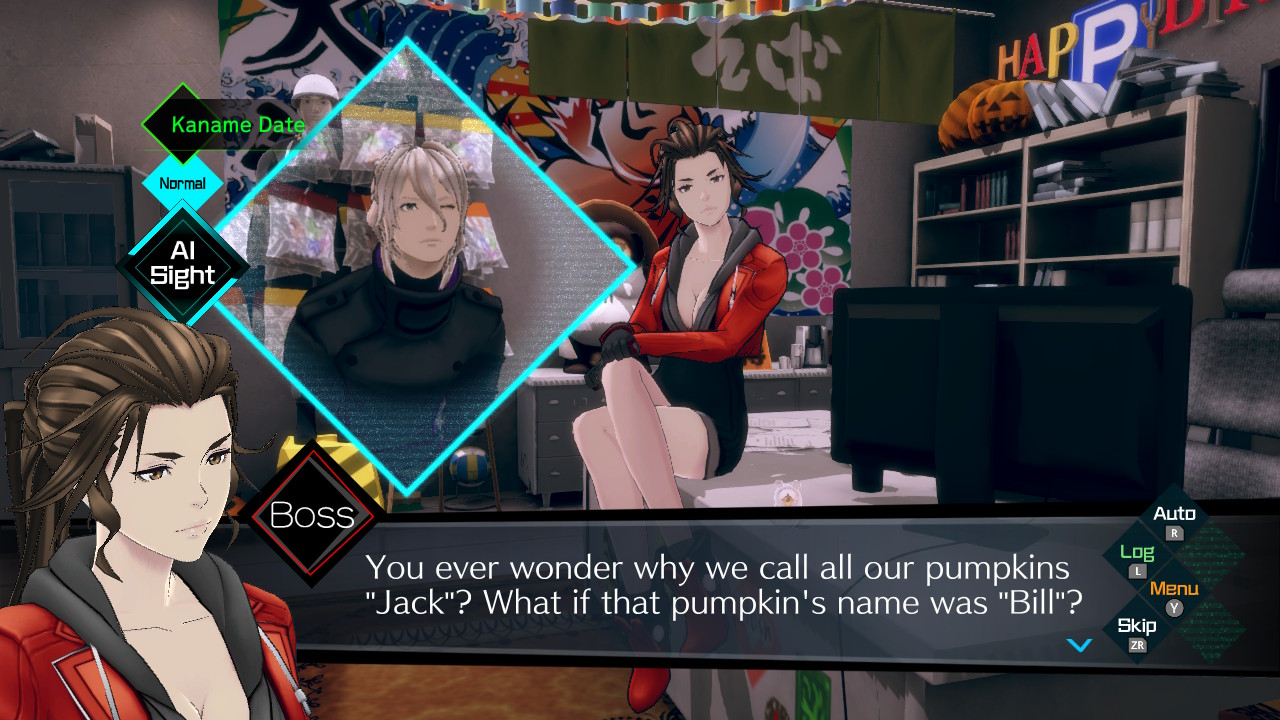 AI: The Somnium Files has you control Kaname Date, an agent for a secret department of the police known as the Advanced Brain Investigation Squad (ABIS). Armed with his partner and literal left eye Aiba, he solves cases by examining a person’s mind through a process known as psyncing. While he only has six minutes to investigate the case, he can essentially hijack a person’s dreams and thoughts ala Inception in order to find out what’s truly going on in someone’s head.

One day, a woman named Shoko Nadami is murdered, with her left eye socket scooped out; Date and Aiba head to the scene and find out Shoko’s daughter Mizuki is hiding near the scene of the crime. Preparing for the worst, Date needs to find out what’s happening with a new string of serial killings on the rise, all while not remembering anything prior to six years ago. What follows is a tale of misery and woe, but also of hope and hilarity.

Something that I quite enjoyed about 9 Hours, 9 Persons, 9 Doors (the first title in the aforementioned Zero Escape series), is how it effortlessly could squeeze in a little joke or cultural reference in between philosophical conversations or run-ins with death. Without spoiling the plot, AI: The Somnium Files does that pretty well, with the humor and horror being about even. You’re dealing with brutally mangled corpses and even child endangerment, but it’s all handled rather tastefully, though it does deserve the M rating thanks to some very gory sequences. 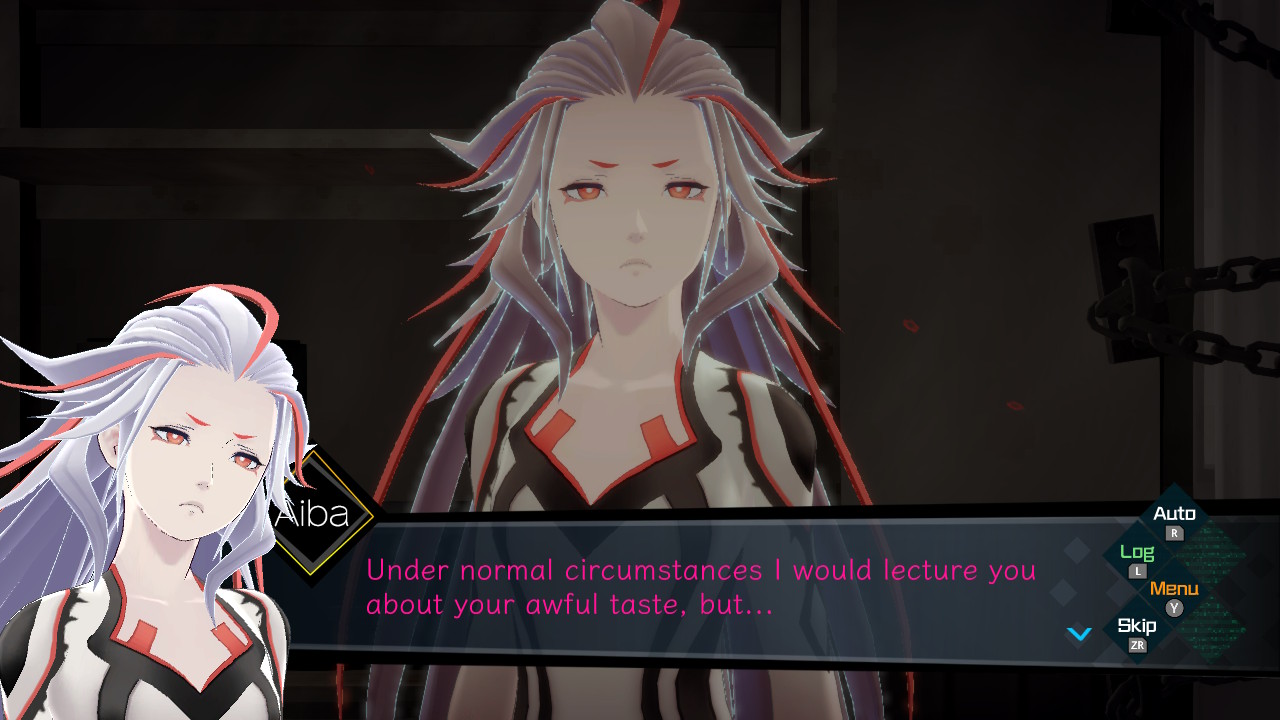 I was surprised at how engrossed I was advancing in the narrative, which is split into investigation and Somnium phases. The former acts are like something out of an Ace Attorney game, as you interview witnesses and observe objects as well as piece together clues when holding subjects within interrogation. All of this moves in a linear fashion, as the game will tell you when to travel somewhere else. However, there’s so much detail in the flavor text and support conversations that I felt like I wanted to explore every nook and cranny (much like an Ace Attorney game) just to see the banter between Date and whoever assists him at the time. There are also callbacks and brick jokes that come in during quiet times, and it’s these small little details that really flesh out the title and set it apart.

The main character Date is unlike most protagonists in related visual novels; namely, he’s not a prude shy boy that blushes when a sensual remark pops up. Rather, he’s a slightly perverted individual that will take a cheap shot at a juvenile joke whenever possible, with Aiba and most people around him poking fun at his expense. It’s an oddly hilarious dynamic that works, and while it can be a little too much sometimes, I admit I laughed out loud at many moments. The cast as a whole is endearing and memorable as well; I would consider Aiba, Mizuki, and internet idol Iris (aka A-set) to be the main supporting characters of the cast, and each of them have their own fleshed out character development that is heartwarming and heart-wrenching whenever the game wants it to be. The minor characters, like flamboyant and doting informant Mama and reforming gangster Moma are a delight, and even a throwaway inspector named Kagami gets his fair share of banter with Date. The whole cast is amazingly entertaining, and each voice actor gives it their all with every role. Everything is fully voice acted too, which makes the visual novel aspect of the game blend into the adventure game part well. 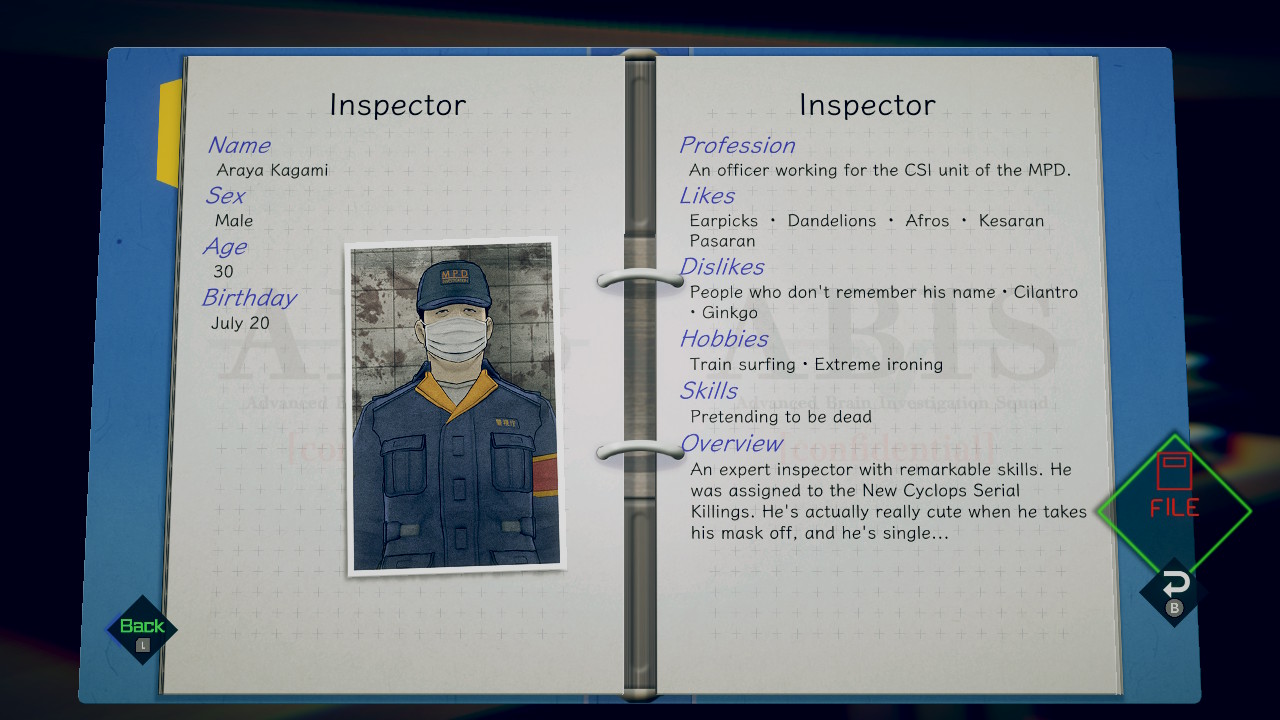 This guy shows up a ton of times, it’s hilarious.

While great characters do make for an intriguing visual novel, it’s the main puzzle mechanic that steals the show. As Date investigates the case, he will go into a person’s Somnium, which is a dream world that runs on the dreamer’s logic. Aiba transforms into a human form here as the player will control her in a free-roaming stage. She can interact with different objects within the world in order to break mental locks, which are mental manifestations of things that the dreamer wants to hide. These crazy places also have a strict six-minute time limit, with every action and movement causing the timer to decrease. There are story reasons as to why this happens, but in the interest of remaining spoiler-free, I’ll just say this does make for a great time management scenario. 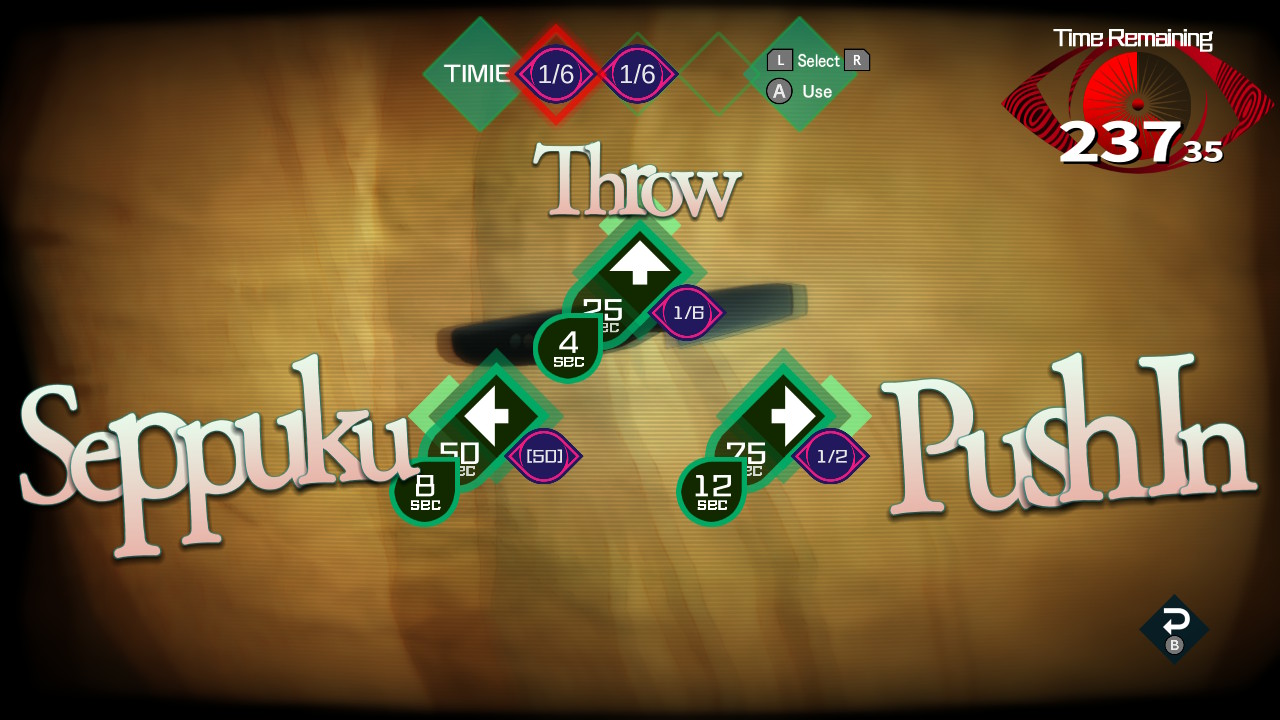 You have limited actions with this time restriction, though there are items called TIMIEs that will allow you to lessen the time taken from an action. However, some actions will also carry negative TIMIEs, which will increase the time taken for an action. Unfortunately, later Somnium will require you to bite the bullet and take a negative TIMIE to advance the plot, so you do need to plan in advance. However, restarting is easy; you can either retry from a limited checkpoint system or restart the Somnium entirely, skipping any read text in the process.

While it does seem like there’s no rhyme or reason as to what actions will advance the sequence, it’s rather brilliant because each scenario is catered towards the personality of the dreamer.  In a Somnium for a character who adores Iris, for instance, you’ll have to allow his dream form to defeat the obstacles in your way rather than doing it yourself, which means you need to anticipate what he would want you to do in this scenario. I enjoyed this narrative integration with the gameplay, and aside from one or two very tricky puzzles, I didn’t need any hints or guidance. It’s a system that encourages logical deduction in an otherwise illogical world.

In addition, certain Somnium have multiple outcomes which will decide the direction of the story, with the first branching path causing some distinct differences with how you interact with the rest of the cast. In fact, a couple of routes will be locked unless you experience most of what the game has to offer, so the inclusion of a Zero Escape-like flowchart where you can hop in and out in any part of the story you’ve experienced is very helpful.

The only real issue I have with AI: The Somnium Files is how the TIMIE distribution is somewhat random, which may make for some areas boiling down to trial-and-error. While you generally get positive or negative TIMIEs in the same areas, the values themselves change when restarting or generating a different order. Sometimes I would get a ½ TIMIE when I was expecting a ¼ one, which makes all the difference when I’m on the last mental lock of a Somnium. This randomness does break immersion somewhat, as I wish that these TIMIEs would be fixed values. 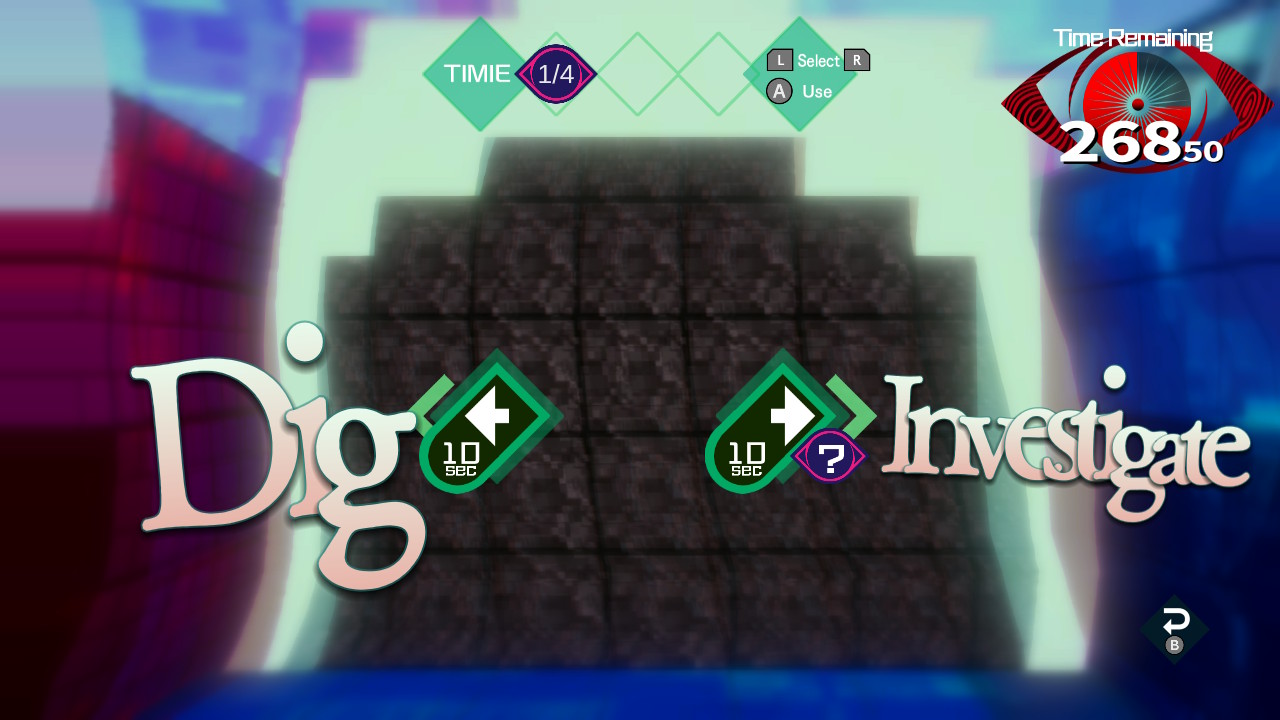 Additionally, the Switch version of the game is technically inferior to the beefier PS4 and PC iterations, as there are a few additional load times and some framerate drops when there’s a lot of stuff going on during novel segments. Luckily, this isn’t a problem in QTE sections, but the technical problems are noticeable for the Switch version. That said, it’s rather impressive that a game which renders its cutscenes in real-time and utilizes a lot of simultaneous in-game flashbacks can work decently well in portable mode, and a recently released patch mitigates the load times somewhat. However, if you want to play this game on the go (and for visual novels, handhelds are the best option), I would wholeheartedly recommend the Switch version. 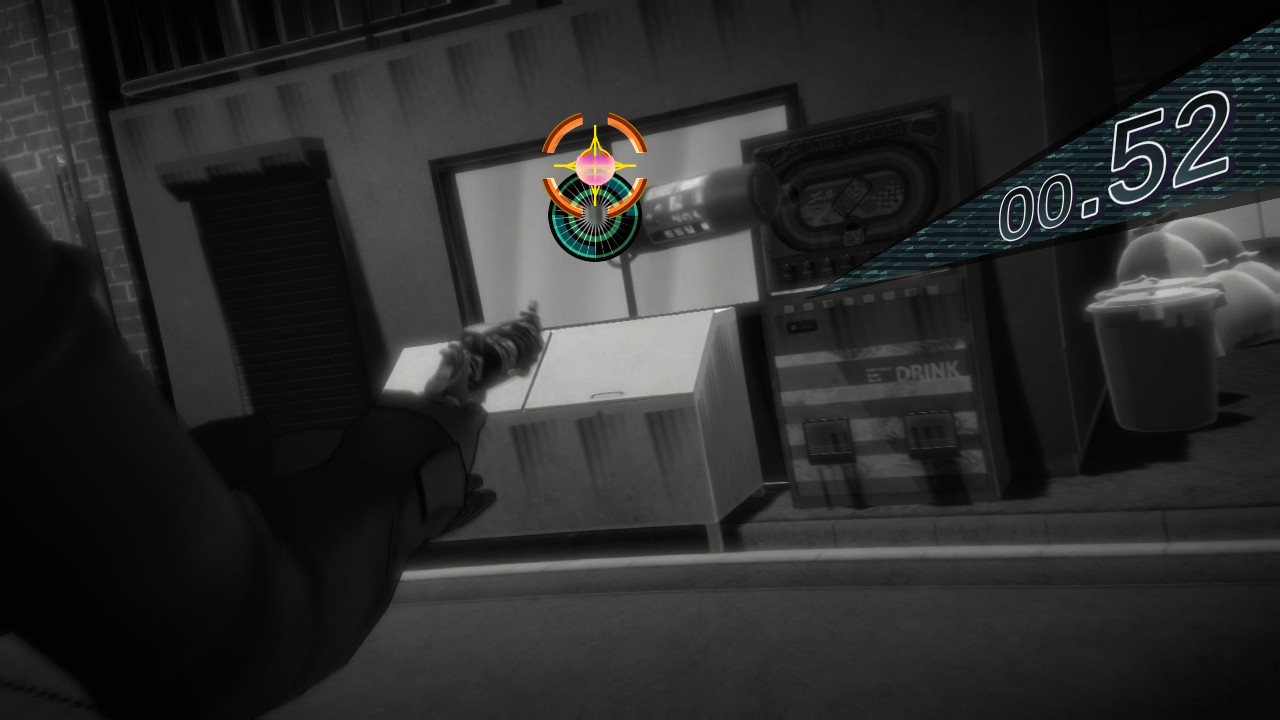 You know what kickstarts this? A nudie mag.

With an endearing, violent, and engaging story, AI: The Somnium Files is an adventure game that fans of the visual novel genre should not miss. With a novel puzzle-solving mechanic and impressive voice performances, this game is a dream come true.

Elisha Deogracias is an aspiring accountant by day, freelance writer by night. Before writing for Gaming Trend, he had a small gig on the now defunct Examiner. When not being a third wheel with his best friends on dates or yearning for some closure on Pushing Daisies, he's busy catching up on shonen manga and wacky rhythm games. Mains R.O.B. in Smash. Still doesn't know if he's a kid or a squid.
Related Articles: AI: The Somnium Files
Share
Tweet
Share
Submit