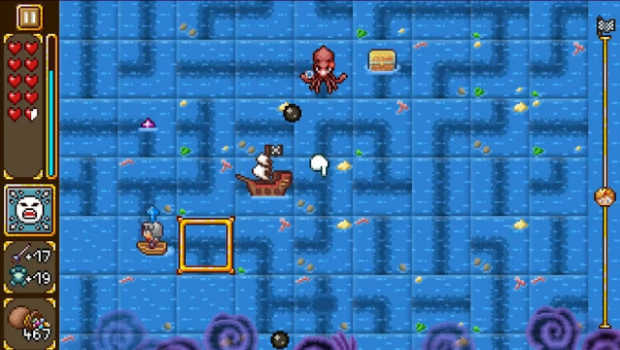 Pace is more than a putrid picante, my friends. Pace is the general flow of things that can turn a trip to Disneyland from a dream come true to a nightmare, or put a sports team in or out of championship contention.  Video games are no stranger to the perils of pace, where a game that otherwise has great qualities still risks dragging snail-like towards progression.  It is no secret that this can ruin a gaming experience, but what if the game is also not very good?  What if the pace of a game is such a drag that it makes a rather boring and pedestrian gaming experience a painful and infuriating one?

In SwapQuest, a meandering little puzzle/RPG mashup, the answer to that question is you simply don’t play.  Combining all of the more mindless and boring functions of both genres into something dangerously teetering on torture, SwapQuest fails to provide the core fun factor needed for video games. SwapQuest falls well short of their goal of success even with a rather small number of glitches and problems.

SwapQuest is a puzzle game more than anything, with RPG elements thrown in throughout.  The game is centered around two siblings who are on a noble quest, where monsters will be fought and castles entered and exited amidst several fields crossed and battles won.  Nothing is going to break your mind open here with story;, it almost doesn’t exist.  Can’t knock it for simplicity, but you’re not going to get the expected level of story with an RPG in this title.  Bad guys are bad, and you’re a good guy.  You get the jist.

The game is played moving left to right or bottom to top, with a little variance.  The game play is all done on a single “map” made up of several square tiles.  Each tile has a “path” line that is different shaped, and your job is to move the tiles into place so that your character can proceed along it towards the end.  A deadly purple cloud follows you in each level, pushing you along and slightly damaging you if you get caught up.  Along the way you’ll find chests, enemies, and other items like bushes, trees, and rocks that can be destroyed for the game’s currency, “gems”, and other items.

The problems start, as you may have guessed, with the pace.  The cloud that pushes you along moves so slowly that it is impossible to get caught up in it, but that’s a good thing because you’ll find yourself stopping and starting, looking around for tiles and then moving all of the time.  Tiles are hard to move, especially if you want to use the touchscreen.  They can just drop sometimes without warning, and any little sensitive movement can mess your plans up.  The character you choose moves so slowly that once you’ve planned or built a path, you’ll be just waiting for the character to make it across and there is absolutely zero to do in those moments.

All attacks are automated when you approach an enemy, but they can almost always be avoided outright if you’d prefer.  All chests and items are also picked up or opened automatically, and so the only other function you provide is to tap trees, bushes, rocks, and other on-screen scenery to release gems.  This means you’re basically a cosmic gardener, opening up convenient paths for a hero that is strong enough to fight giant bugs but not brave enough to walk on grass.

Each level is broken up onto an overworld map that serves as the “quest” for the game.  There are times where you can branch off into different paths and play in “bonus” style stages.  This is a fully functional and just fine feature of the game.  It works, it looks okay, and the idea of bringing in bonus stages adds a little bit of variety to the main game.  This is especially important when the main game is as lacking in fun as SwapQuest’s.

The lack of interesting action pervades throughout until you reach a boss, and then the disinterest becomes incredible frustration.  The bosses requires a little more technique to fight, and give you a bit more ability to strategize and build an “arena” of sorts out of the paths so you can attack.  However, the movements and patterns just don’t exist, and so you spend all of your time trying to build a path. By the time your slow sprite makes it over the boss is already moving on to another place or attack.  It never feels overly difficult or challenging, just frustrating to the point of giving up.  You don’t die and the boss doesn’t die, you just keep making paths and getting there too late.

The music and graphics for the game don’t help the quality any.  Less 8-bit nostalgia and more 8-bit suppressed memories, the look of the game is as bland and lifeless as the gameplay is.  The two work in tandem to put a thick frown on your face.  The music is repetitive and childish.  The art for the game does seem to be centered around a younger audience, and so I would surmise it works better in that arena than it does for an adult gamer such as myself.

On the positive side, most everything is functioning and not broken, and this game would be great for younger audiences.  The fact that kids can play this game without it malfunctioning too badly means they have a chance to play and beat it.  The problems with tile dragging are annoying, but not game breaking in any way.  The overall theme and style all lend themselves to young kids very well, and with the simplicity and overall ease in terms of challenge, this may be a great way to introduce a youngster to the world of RPG gaming.

SwapQuest is a mix of puzzle and RPG gaming that fails to provide a fun experience with either. Slow, automated, and almost entirely bland, SwapQuest falls short on creating a fun or compelling experience. The game is almost entirely operational, with only a few small glitches. Children of a young age, or first time gamers may be able to get some enjoyment out of this, but it has little appeal for any serious or even casual gamer.

Patrick Rost has been with Gaming Trend since 2013. At first focused on sports coverage, Patrick has gone on to cover a wide range of games and other products for the website. Outside of Gaming Trend, Patrick writes and records music, grinds perpetually in Elder Scrolls Online (PS4), and lives day to day with his two dogs, Bob and Stella.
Related Articles: SwapQuest
Share
Tweet
Share
Submit