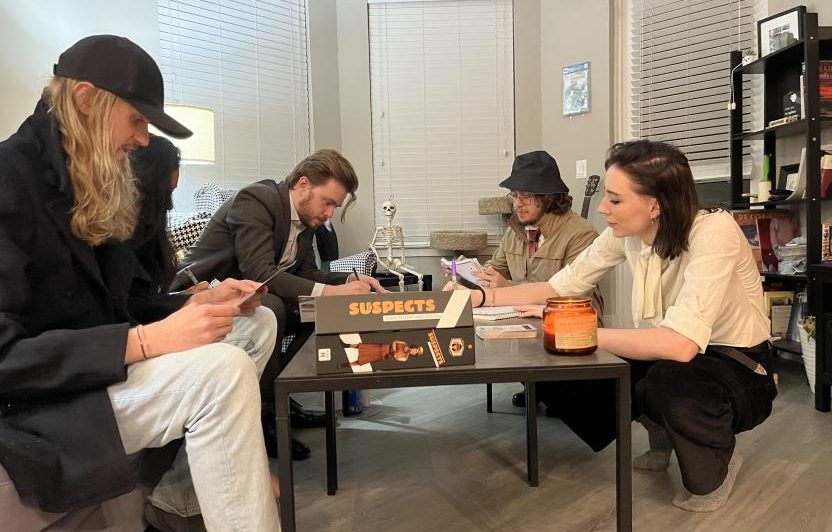 At the end of the day, fun is what drives me to play tabletop games. Can this game grab my attention, and can my friends and I have some fun along the adventure? Well, I tried something a little different with my review for Suspects. I invited four of my friends over to our apartment to try this game out together. Each one of us dressed up as a famous detective from fiction. In attendance, we had Jessica Jones, Sherlock Holmes (Cumberbatch version), Adrian Monk, Inspector Jacques Clouseau, Ichabod Crane, and I was Detective Benoit Blanc from Knives Out. We had a fancy dinner, and got to work solving the Murder of Allister Manor! 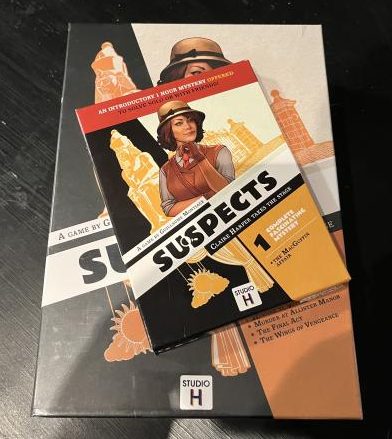 As we open the box we find main instructions on a nicely made four page insert. They explain what objects go with what mystery on the front page, instructions on the inside, and specific rules and “Who is Claire Harper” on the back. Claire is our protagonist. We had two people read through the instructions and they were pretty straight forward: follow the card numbers depending on what choices you make in the game.

This game is a “choose your own adventure” type setup. You start out with an opening card that gives you the details of the start of the case. We were introduced to the murder, and in turn met the butler, who gave us some of the details. Then our journey truly began. 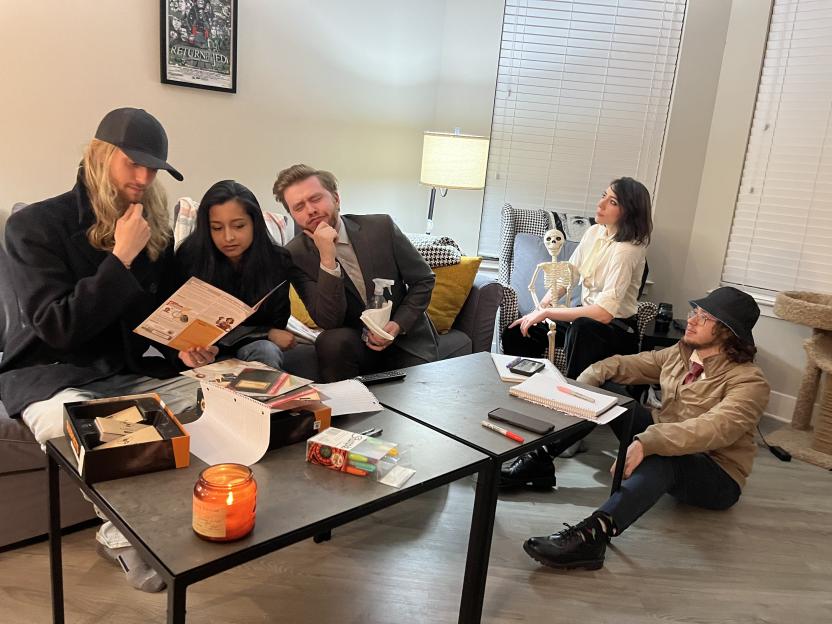 We worked as a team to go room by room, finding clues, meeting with the family involved and some of the surrounding workers including the gardener, the dance teacher, and someone I don’t care to expand upon due to spoilers.

Speaking of spoilers, replayability is close to non-existent since the solution doesn’t change depending on the way you handle the order in which you pull cards. Scoring is done by making your guesses between pulling 1-30 cards (5 points), 31-45 cards (4 points), 46 or more cards (3 points), or if you get the wrong answer (0 points). Your total score tells you which ending you get from the story. You can either answer the questions individually, or you can do what we did and answer all-together since we all played as Claire as the protagonist. Our group ended up getting the “good” ending, but not the perfect ending. This was due to an unfortunate set of circumstances of choosing the only location on the map that closed us off from getting cards. With this being the case, each group can probably only play each one once unless you really want to play again to try and get the “perfect” ending. The only issue with that is you know all the answers.

We started in a specific room that had us choose to either give the letter to the intended person or open the letter and read it for ourselves. In fear of making the intended person angry, we didn’t open the letter. When we handed the letter over, we actually were told that we were to remove three specific cards from our deck of clues, locations, and conversations. We later found out that the card we didn’t get to have actually would have fully removed a suspect from our list. Part of it, seemingly, was our group metagaming, saying to each other, “if only we read that letter, we would’ve been able to eliminate the suspect or at least know.” At the end of the day, though, we still got a good enough score to get an ending we felt was fair. 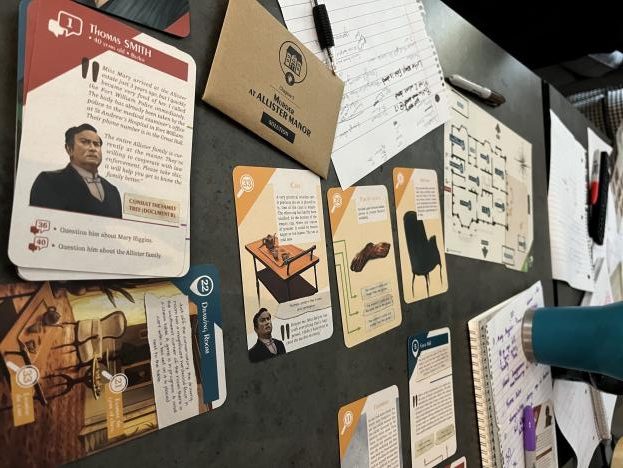 After we were done with the game, I had the opportunity to ask my friends a few questions. One of them was, “did playing this first mystery make you want to play the other two included in the box, and would you want to get the extra mysteries when/if they made them available?” (We were provided with an extra box with a mystery to take a look at with this review). Four out of the five were a quick yes, with one stating, “even though we messed up that one thing, I had a great night and enjoyed going through and making choices together.” The one person who said no cited a “lack of foreshadowing” when it came to the correct answer to who the killer was from our mystery. While I agree that it would have been nice to have a bit more foreshadowing, I’m pretty sure we would have gotten the right answer if we hadn’t made that first mistake at the start of the session.

From a gameplay standpoint, we truly did have our way with the game. I’m sure each group of people will play it completely differently and choose different rooms to start with, different family members to start with, etc. We did a lot of moving around the house at first, but then quickly moved to talking mostly to the family and the other characters in the house. It was always such an exciting experience for us when we’d find a new area or a clue we really needed to help with the case. It truly felt like we were figuring things out and we all got invested pretty quick. (Even though we had to stop ourselves from sneaking a peek at the cards we didn’t get to see). It was a group effort, and that in itself was the most fun part of the game. The experience of playing with friends. 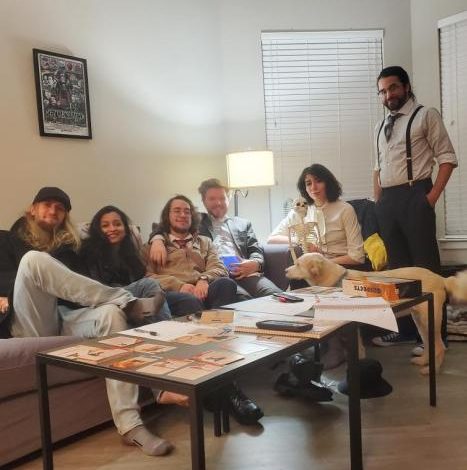 I looked over the title cards for the other two mysteries in the box and they all seem intriguing. We plan to play through them all fully. However, while the box says it takes 90 minutes to play, we ended up taking about two and a half hours to fully get through, not taking breaks for anything other than a picture now and then. Also, while the box suggests 1-6 players, you could totally have more players as long as everyone is there to have fun and are willing to listen to one another.

Suspects is probably one of the most engaging murder mystery party games I’ve played. From the moment our Sherlock Holmes started reading the description, everyone around the table seemed hooked to figuring out what happened. We laughed, we argued, we found the clues, and in the end, we got an ending worth getting. At the end of the night, we solved the Murder at Allister Manor.

A great game to invite your friends or play by yourself. Good quality cards, easy to understand instructions, intriguing stories, and lots of fun. While replayability is close to non-existent, the fun you have playing through each mystery is worth the time and effort.

Adam is a musician and gamer who loves his partner in crime, Regan, and their two pets Rey and Finn. Adam is a fan of Star Wars, NFL Football, and gaming in general. Follow Adam on Twitter @TheRexTano.
Related Articles: Suspects
Share
Tweet
Share
Submit