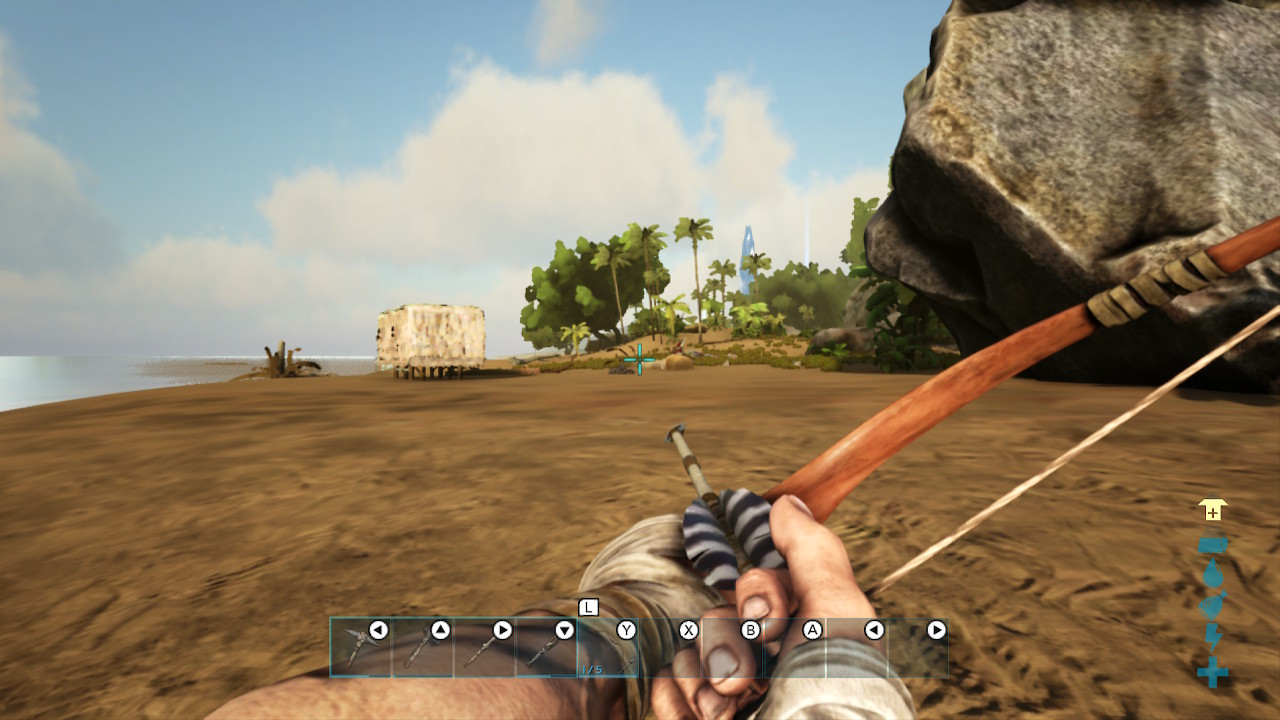 Ports of games are usually a good idea, as they offer more opportunities for gamers to play games on different systems. This is especially wonderful when certain titles are exclusive to one system, but end up branching out to reach a wider audience. That being said, the ports don’t always end up the same as the original, whether they be for better or worse. Ark: Survival Evolved started on Steam, made its way to PlayStation 4 and Xbox One, and now has made the jump to the Nintendo Switch. The portability sounds nice, but the question is, “Does it perform well enough on the Switch?”

Ark: Survival Evolved starts with you creating a character by altering aspects such as skin tone, eye color, head size, chest shape, and more. The body adjustments are made with sliders that allow you to create whatever monstrosity you feel the need to bring to life. Want a short brute with skinny chicken legs and fat feet? Do it. Prefer a tall, lanky person with thick thighs and baby hands? Go nuts. The point is, you can have fun with the customization sliders and have a good laugh. After your lovingly formed human is done, give them a name, and hit create. From here, you’re dropped onto The Island to start your adventure.

The goal of Ark: Survival Evolved is simple: survive. To start off, you’ll want to punch a tree, pick up some stones, and grab some plants in order to gather some materials. With these, you can make tools such as stone picks and stone axes. The picks are used to break apart large stones so you can gather larger quantities of stones, flint, and other minerals, while the axes have the same effect with trees to collect wood and thatch. These two tools are essential if you plan on getting enough resources to craft better and more advanced tools.

Now, you won’t have access to build everything the game has to offer right away. Not only because of resource constraints, but because you need to unlock the ability to craft each object. As you play and do things like collect resources, fight dinosaurs, and just survive, you’ll earn experience. Earning enough experience levels you up, giving you the choice of which stat you’d like to level up. These include stats such as health, stamina, carrying capacity, movement speed, and more. I tended to opt for carrying capacity because if you collect more weight than your capacity, you’ll move slowly or even be unable to move until you drop something. As for crafting, you have an engram menu that reveals rows of blueprints for each level you reach. Each engram (blueprint) costs a designated amount of experience to unlock; once unlocked, you can now build that object. At first, you’ll learn to craft things such as spears, thatch housing, hide clothing, and a sleeping bag. As you level up and get more advanced, you’ll be able to create things like beds, slingshots, bows and arrows, gunpowder, and much more. It may take some time to unlock everything, but that’s a part of the gameplay.

I mentioned dinosaurs earlier, and yes, you’ll have dinosaurs roaming around. There will be pacifist dinosaurs that won’t attack unless they need to defend themselves and others that will try to make a meal out of you. You even get to see adorable dodo birds. You have two options if you choose to engage a dinosaur: do you want to kill it for food and resources or knock it out and attempt to tame it? The first option is fairly obvious to understand but the second option is tougher to complete. You’ll need to use a club or tranquilizer arrows to knock your target out. Once they’re down, you’ll need to feed them food that they like in order to tame them.There’s a taming bar that slowly fills if you’re successful. You have to keep the dinosaur down until it’s 100% done or else you lose the progress. Narcoberries make dinosaurs sleepy, so you’ll want to keep a bunch of these on hand for situations like this. Hit 100% tamed and now you have a pet dinosaur. They’ll fight for you if you’re in danger or if they’re big enough, you can ride them around like a horse. The catch is that you need to craft their specific saddle first if you want to ride them.

Besides dealing with dinosaurs, you’ll also need to keep an eye on your hunger, thirst, temperature, and more. You need to eat and drink to stay alive, get warm if you’re cold, or cool down if you’re overheating. Not paying attention to these aspects can get you killed; it might not happen instantly, but over time, you’ll suffer the consequences.

If you’ve heard of Ark: Survival Evolved before, you’ve probably heard about its abundance of issues, including framerate, optimization, glitches, etc. I hate to say it, but at least some of those problems exist in the Switch version. It feels like there could be potential of the world looking beautiful, but it never reaches that potential. Everything looks kind of blurry, and even if something doesn’t look blurry, it still doesn’t look great.The draw distance is a problem as well; a lot of times, I’d either see things pop in out of nowhere, not load fully, or load as a fuzzy semblance of something. It made me not want to look very far ahead, because if the road ahead looks terrible, what reason do you have to keep moving forward? In addition to that, the framerate dropped more often than I would’ve liked. Sure, it can happen in games every now and then, but it was way too noticeable here. It was almost as if the game was struggling to load the world around me and keep up with my actions at the same time. Speaking of loading, it takes several minutes to even load into the world, and that’s only concerning a single-player game. It’s not awful, but mixing that together with the aforementioned issues, it becomes less forgivable.

That being said, if you still want to give Ark: Survival Evolved a try, I’d recommend trying on another system. Sure, you get the benefit of portability with the Switch, but you’re getting worse graphics and optimization as a result. Ark: Survival Evolved has been around for a few years, and if it could get past these visual and performance issues, then maybe it could become something wonderful. Until then, I wouldn’t get my hopes up or spend too much money on it.

Ark: Survival Evolved is an open-world survival game where you're fighting against the elements and the dinosaurs around you. There are some nice concepts implemented, but framerate and performance issues drag the game down. Unless these are somehow fixed, you might be better off steering clear.

Codi loves to play video games and watch movies. He will watch almost any kind of movie just to experience them. His ideas take inspiration from the shows and movies he watches, and games he plays. He also loves a good pun.
Related Articles: Ark: Survival Evolved
Share
Tweet
Share
Submit