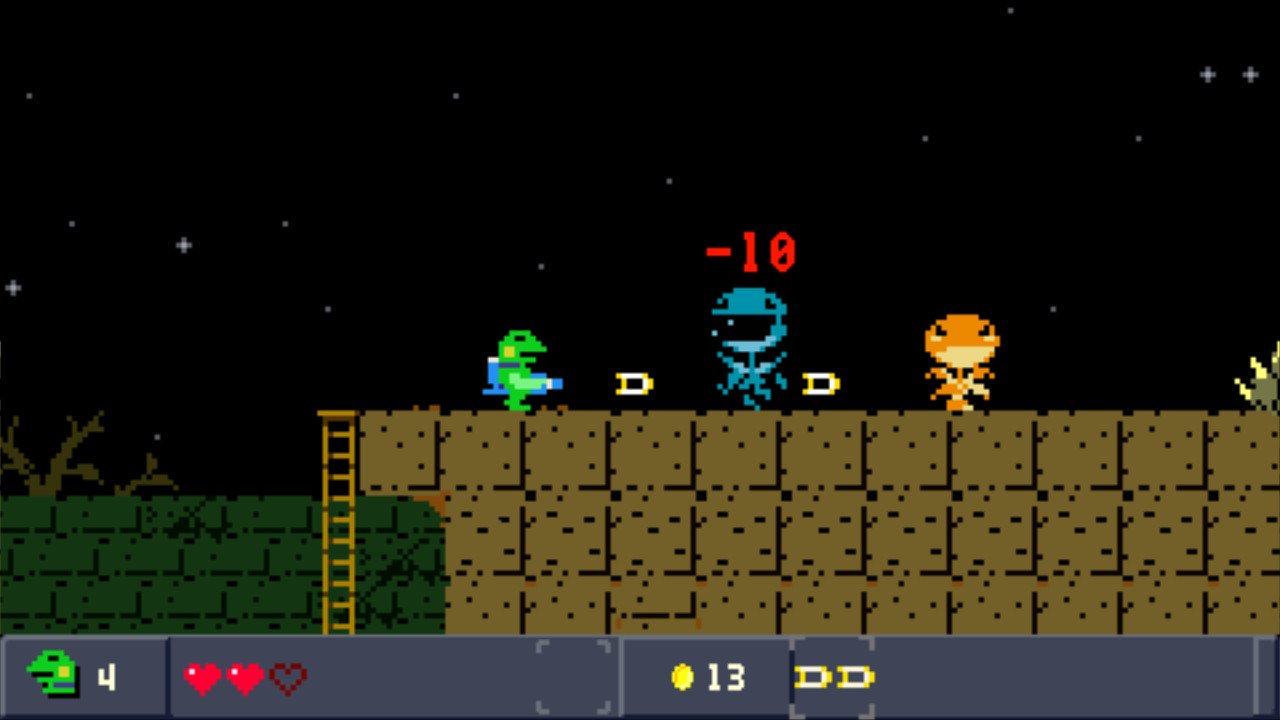 Initially, I didn’t really expect much out of Kero Blaster. I’ve heard a lot of praise from those who came from playing the developer’s previous work, Cave Story, but I never looked further into the run-and-gun game when it initially launched a few years back. However, the Switch version of the title is now available, and after finishing the game, I’m impressed with its simplistic style that is a charming throwback to the genre by which it’s inspired.

Kero Blaster puts you in the role of an amphibian armed with a peashooter who goes to different areas beating up baddies thanks to the transporting machine at Cat & Frog Inc. The game feels similar to Cave Story in the sense that you’re traversing 2D pixelated worlds while upgrading your slate of weapons, but Kero Blaster is more akin to something like Mega Man or Contra, as you’re running and gunning with ample time to react to the variety of enemies trying to destroy you. Throughout the seven main stages, you’ll come across four weapons that you can upgrade in the middle of a stage or after continuing from a game over (with a fifth unlockable one down the road after replays).

The biggest thing that separates Kero Blaster from its ilk is how accessible the game is. The run-and-gun genre is notorious for being extremely difficult, and while Kero Blaster shows signs of nightmarishly hard battles, for the most part it’s manageable and gives newcomers breathing room during the initial campaign. Most of the game exudes a charming, friendly atmosphere (though it’s punctuated with some creepy moments), and it has an inviting world and pixel art-style. While there is a lives system that will boot you back to the beginning of the stage should you perish, checkpoints are generous enough and any mid-bosses or progress you make stays permanent, so you don’t have to worry about wasting any precious time or lives on a pesky enemy. You won’t lose any money when dying either, and after you restart, you’re free to get items or upgrades from the in-game hospital.

You are purposefully underpowered at first (and if you don’t upgrade your hearts bar as soon as possible, you’re in for a world of hurt), though you’ll eventually unlock new weapons and skills that allow you to get around newer stages, which is a nice way of tracking progression. Each level is filled with a sense of whimsy and enemies which you’ll need to shoot back. The pixel art is sharp and distinct, and it’s fun to control your character as he stoically hops around. While it does look great overall, there were quite a few times when the game looked a bit barren and minimal, and the emptiness is exacerbated because there are only a handful of unique settings.

The main campaign is rather short considering the subject matter, and it’s initially pretty easy to finish the normal campaign, but Kero Blaster has a little more up its sleeve thanks to unlockable difficulties. Probably the biggest flaw with Kero Blaster is its strictly linear structure that doesn’t allow for much exploration. After you complete the normal mode, you’ll unlock Zangyou Mode, which is a hard mode that remixes levels and enemies so it’s basically a new experience (plus your frog is another color and the narrative is funnier compared to the normal mode).

Beating this mode will grant you another extra mode, which acts as an even harder mode including a fifth, more powerful weapon. Still, the linearity kills a little of the replay value, and aside from some small chests and acquiring pieces of the aforementioned final weapon, there isn’t much reason to go off the beaten path.

Kero Blaster proves that going back to a genre’s roots can be a refreshing experience. While marred by a sense of strict linearity and some barren background elements, it’s a treat for those that want a solid run-and-gun title.

Elisha Deogracias is an aspiring accountant by day, freelance writer by night. Before writing for Gaming Trend, he had a small gig on the now defunct Examiner. When not being a third wheel with his best friends on dates or yearning for some closure on Pushing Daisies, he's busy catching up on shonen manga and wacky rhythm games. Mains R.O.B. in Smash. Still doesn't know if he's a kid or a squid.
Related Articles: Indies, Kero Blaster
Share
Tweet
Share
Submit