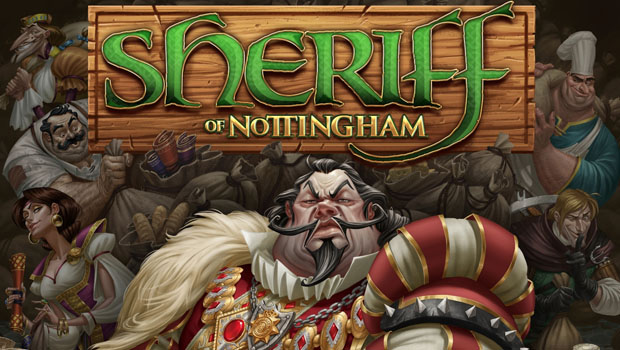 Apples! Chickens! Bread! Cheese! …and Crossbows? Sheriff of Nottingham is a game that transports you into the world of Robin Hood and Maid Marian (though neither are ever mentioned). You are a merchant who is just trying to get your goods to the market. It’s a tough life and sometimes you have to move some contraband to make some extra cash. Just don’t get caught peddling black-market items or the sheriff will make you pay!

Sheriff of Nottingham is a bluffing and card management game. Players are merchants who are bringing their goods, represented by cards, into Nottingham to sell at the local market. Each player will act as the Sheriff twice each game. The goal of the game is to make the most money either by collecting the most value of goods or by taking bribes.

Goods come in two varieties, legal and contraband. Apples, cheese, bread, and chickens are welcome goods in Nottingham. Contraband (crossbows, black pepper, silk, and mead) are where merchants make the most money, but the sheriff doesn’t want these illegal goods flowing into the city. Players put a selection of goods from their hand into a sealed bag. They announce to the Sheriff what goods they are bringing into the market. If the Sheriff believes them, he will let them pass through. If he thinks they are lying however, he has the option to inspect a player’s bag. If the goods differ from the announced inventory then the merchant is fined and the goods are seized. Although, if the merchant was telling the truth, then the sheriff must pay a penalty to the merchant for delaying their shipment.

Each round of the game can be broken into four parts: the market, loading the merchant bag, declaration, and inspection. During the market phase, players can discard up to five cards from their hand and redraw until they have a total of six. These cards can be drawn from either the draw pile OR the discard piles. But be careful where you draw. If the Sheriff see’s you pick up from the discard pile and there are illegal goods present he may be more inclined to search your bag!

Once all the players have had the opportunity to collect different goods, it is time to load the merchant bags. Each player selects the goods, between one to five, to bring to market and place and seal them in their bag. Players go around the table announcing what is in their bag, or at least what they say is in their bag. Merchants may only claim to have one legal type of good in their sealed bags.

The current sheriff then decides whose bag to inspect and who to let pass without inspection. Almost anything is on the table for bribes: gold coins, goods from your market stand, even goods in the shipment. The point of no return is the snapping sound of an opening bag. Once this is heard, there is no going back. If the merchant was lying about the goods he must pay the fee on the cards he was lying about. These cards then get discarded and will not be scored at the end of the game. If the merchant was truthful then the Sheriff must pay the fines AND the merchant can put the goods on his merchant stand to be scored at the end of the game.

There is a lot going on in this game: player interaction, bluffing, press-your-luck, card management, and if players want to get in to it, role-playing. Because each player also acts as the Sheriff during the game, you get to watch your friends go from innocent little merchants to power crazed villains just with the passing of a token! And who doesn’t love to watch their new-to-games friend explore getting into character for the first time?

I am also a huge fan of bluffing games. I’m not sure what this says about me, but I’m really good at lying to people and figuring out when people are lying to me. Much to my husband Scott’s chagrin, I can tell when he’s trying to slip a crossbows in with his cheese from a mile away. What makes this game truly unique is the fact that players must play both the merchants AND the sheriff. You have to be careful not to just open everyone’s bag while you are the sheriff or you will run out of money! On the other hand, if you let everyone pass through you are giving points away. Players must think carefully about when to press their luck, and when to step aside. There are also some very intriguing strategies I have seen while playing Sheriff. One that I like to use is to trick the Sheriff into thinking I have contraband when I do not so he will be forced to pay the fines. Or to see just how much a merchant is willing to pay for merchandise. 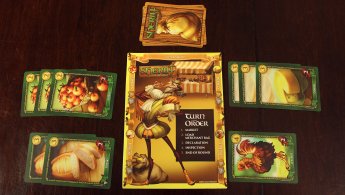 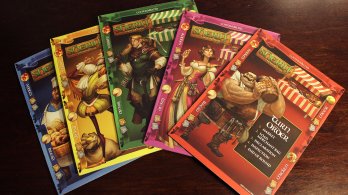 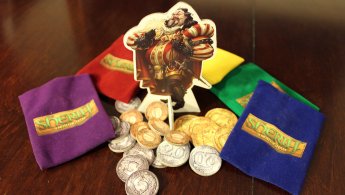 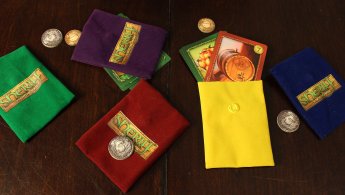 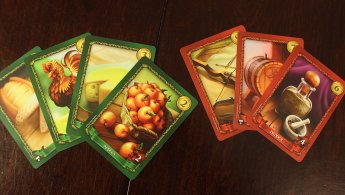 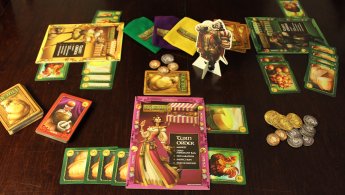 To be honest the theme didn’t really stick with me. I mean I’m all for Robin Hood and Maid Marian, but I didn’t feel like I was immersed in their world during this adventure. The only mention of Nottingham at all is in the Sheriff’s title. That being said, this game is super entertaining. I sometimes feel that heavy player interaction games can get a bit more like an activity rather than a true boardgame, but Sheriff does a great job staying balanced. There is enough strategy for the serious gamers and yet is engaging enough for party players. Deciding what cards to play when is vital to the game. So is being able to read your fellow gamers. Who can you trust and who is a cheat?

Another great thing about the game is that it changes drastically based on the people who are playing. I played Sheriff with a group of friends who took the bribes very seriously. They weighed the cost of bluffing and the various outcomes of fines whether they were caught. The next week I played with someone who just opened every bag they were handed, regardless if you bribed them or not. The differences between the two groups made the experience more malleable which is a refreshing trait of the game. Sheriff is great with more people. I would highly suggest playing with at least 4 people, though 5 players is best. The more player interaction the better!

The rules for the game are very simple. There seems to be a lot going on at first but the rulebook does a great job of laying out what’s what. They even included player hints alongside several optional rules that can change the way the game is played, including different hand sizes, new goods, and time limits for inspection. The rulebook also includes a very handy chart that shows how many of each card is in the deck. This allows players to track the goods if so inclined.

The art in Sheriff is perfect for the feel of the game. The goods are beautifully illustrated and clearly show the legal from the contraband. The character illustrations are cartoon like and hint to the silliness that will ensue when playing Sheriff. The designers did a great job with the components as well. There are only a few used in game play but they are all high quality. The velvety bags, heavy stock for the cards, and thick cardboard coins make the game well worth the price tag.

This is one that you MUST add to your game shelf. It will become one of the hit gateway games of the year. The high player interaction will attract both heavy and light social gamers alike. There is enough strategy for the pro’s to be interested while still entertaining for new players. This will become a staple in anyone’s board game collection, and rightfully so.

I haven't always been a gamer. Roller Coaster Tycoon was about as gamey as I got until I met and married my gaming husband. Since 2010 we have been playing every game we can get our hands on. I am drawn to games with high player interaction, superb art, and strong themes.
Related Articles: Sheriff of Nottingham, Tabletop
Share
Tweet
Share
Submit