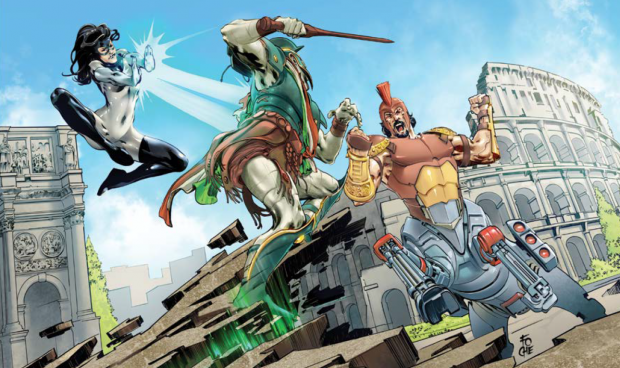 Since its release in 2011, Mutants and Masterminds Third Edition has been one of the go-to games for anyone interested in superhero roleplay. Its blend of flexible character creation, fast resolution, and modifiable powers has helped to cement it as a game that is both deep and approachable. Since then, its releases have focused on giving you even more freedom, whether it be in terms of character options or campaign types. Green Ronin has also released a slew of material on smaller portions of its setting: Earth Prime. Now, those previously electronic releases have been collected into a single volume, the Atlas of Earth Prime, which is available in print for the first time.

Before now, Mutants and Masterminds’ greatest strength also opened it up to a weakness of the superhero genre: the open nature of its powers and character types forces a lack of focus on any core, central theme. Powers could come from inborn mutation, alien influence, or medical experiment, each of which imply differing moral questions and storytelling techniques. The benefit is that players and GMs have the freedom to explore the superhero genre as they see fit, not bound by any overarching meta story or conflict. The drawback is a world that does not have anything binding various factions or regions together. This tension between freedom and theme carries through to the Atlas of Earth Prime, for better and worse in differing proportions.

The core Mutants and Masterminds book only alluded to two locations: Emerald City and Freedom City. Both of these, for differing reasons, are unique epicenters of extradimensional energy, quickly becoming hotbeds of superhuman activity. The Atlas still recommends starting with the core book as a basis for those locations, but expands their influence to add context to the wider arena of North America. This context is limited, but it helps us envision the Americas after being opened up to these new sources of heroes and villains. I appreciate the time the writers took to touch on small areas and the effects superpowers have had on them.

Each of these areas also gets portrayed through action shots that could have been ripped straight from a comic. They are miraculously consistent in terms of style while depicting the various locales with their own unique flavor. Flipping through the book, you will have to stop routinely to investigate the stories and characters they throw at you. I especially appreciate the multi-purpose function of the cover. On the outside, you see a dizzying array of characters from all over the globe. Just inside, however, the same image is indexed to show you the name and point of origin of each. If any spark your interest, you can instantly go to their section of the world to find out more about them and their home.

So much is suggested here, and all of it would be great for a game

For instance, my home state of Pennsylvania gets a small portion discussing a small town in decline since factory work was outsourced to foreign markets. This section is short and doesn’t have much substance, but in a few paragraphs it manages to give you a few adventure hooks that you could expand on or move to other areas but have their roots firmly in their point of origin.

One of the book’s most impressive features, however, is its attention to locales outside of the American sphere of influence. Every continent, including some that do not exist on our Earth, like the fabled Atlantis, gets treatment specific to its cultures and peoples. Small areas continue to see attention, some of which are more fleshed out than others. Not all of their adventure seeds feel tied to the regional culture, but the ones that are give the world a vibrance and character that is perfectly in line with superhero stories. Best of all, these representations don’t fall into stereotyping. The authors have managed to walk a narrow and difficult line to portray foreign flavor without diminishing its individuality.

Where its aim is wide, however, its depth is sometimes lacking and inconsistent. Some areas get a quick few paragraphs and others several pages. Usually, the size of the writeup is commensurate with that area’s presence on the world stage, but there are times when you are compelled by the ideas mentioned in passing and left feeling that you could have gotten more if the writers had spent more time on specific ideas. That was not the goal, however. The goal was to spark those ideas in your brain and set you loose upon the world—the Prime world.

And there is no question that it succeeds there

On Earth Prime, you will find seeds for seemingly endless adventures. Whether trudging through the jungles to uncover ghost pirate treasure (parse that phrase as you please), venturing into unstable spacetime and facing the perils of warped reality, or battling gangs on the mean streets of your home city, the Atlas of Earth Prime will give you everything you need. Its writeups are accompanied by stats for the enemies or friends you may meet along the way. Opening to a section of the world, whether it be somewhere you are interested in or at random, you will get a solid basis for adventures, both conceptually and functionally. Used for this purpose, the Atlas of Earth Prime is an exceptional product.

Taken altogether, it loses steam quickly. Reading through the book, my head was filled with ideas about stories I could tell with my players. Each of these existed individually, however. It’s quite evident that the book originated as a series of separate releases. There aren’t many throughlines to carry the setting as a whole, using events in one area to influence those in another.

A game like Abberrant benefits enormously from its setting. The powers have a common origin, and the world has been reshaped by them, forcing itself to come to new points of view and giving GMs deep themes to examine when they create their games. The tone is consistent and powerful wherever you travel on its world. This same strength of purpose will also preclude some from playing, where their ideas of a superhero game may not fit into that setting.

Everything about this is awesome. This is the level of action you can routinely expect from Mutants and Masterminds, and in much greater quantity in this book

Whether Earth Prime’s conceptual and tonal diversity is a feature or a bug is mostly down to personal preference. It was not out of negligence that the designers made a setting that wasn’t tied to any central themes or events. They achieved the goal they set out to, and they did it with admirable style: give you as much material as possible to run whatever kind of superhero game you want to. Earth Prime, like the Marvel or DC universes, is a welcome home to your imagination, wherever it takes you. Each of the settings held within the Atlas has thoughtful advice as to how you can incorporate it into your game, keeping in mind differing player levels and power types. The book ranges all over, and it wants you to explore every nook and cranny as well. The main point is achieved, and that point is to give you as many resources as possible to make the greatest game possible. Stories, characters, and locations are put straight into your hands, and as a tool for GMs, that is one of the best goals.

Atlas of Earth Prime does beg a question, however: why purchase this volume when you could instead get an individual PDF of whichever area you want to explore? The answer will depend on the individual. If you know for a fact that you want to run a game set in Asia and nowhere else, there is little apart from passing adventure seeds to justify the whole purchase. If you want a larger spread of ideas or don’t know where to focus, the decision makes more sense, especially because the Atlas is the only version of these products available in physical format.

There is one aspect of the book which comes in at the end and has the greatest potential to make for a globe-hopping game that makes use of these various countries: Unison, the United Nations task force meant to tackle superpowered threats. This, section, as far as I have found, is new to the Atlas, and would give you the best opportunity to utilize every aspect of this setting. It is also placed against an enemy organization: the Shadow. Between these two you could optimize the Atlas, this struggle adds a lot of value and alone helps to give you a way to make the most out of Earth Prime.

The Atlas of Earth Prime is a fantastic collection of settings and adventure ideas to get you playing wherever in the world you want to go. It feels disconnected and inconsistent at times, but the individual pieces each have different cultural inspirations and story elements that are welcome additions to a GM looking for inspiration.

John Farrell is a legal aid attorney specializing in domestic violence, living in West Chester Pennsylvania. You can listen to him travel the weird west as Carrie A. Nation in the Joker's Wild podcast at: https://jokerswildpodcast.weebly.com/
Related Articles: Atlas of Earth Prime, Tabletop
Share
Tweet
Share
Submit