It’s been exactly two years since Nintendo released the Wii U, a console that gamers have had a difficult time embracing. In the time since it’s release the device has struggled both conceptually and financially, with detractors citing a lack of compelling games and Nintendo’s odd decision to straddle the current and previous console generations in terms of power and online capabilities. Now along comes Super Smash Bros for the Wii U, a title that not only justifies the existence of the console, but reaffirms Nintendo’s dedication to their audience.

This shouldn’t come as too much of a surprise—the recently released Super Smash Bros. for the Nintendo 3DS was a phenomenal installment in the franchise, especially surprising due to it being a handheld game. The two games share a baseline amount of content and features, but the 3DS title effectively serves as a companion app to the Wii U’s version, allowing players to trade custom fighters and use the handheld as another controller option. 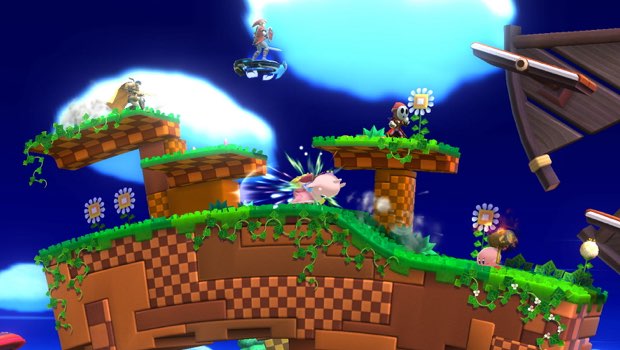 In fact, let’s take a moment to discuss the wide array of controller options made available, because it’s pretty crazy. Obviously, the standard Wii U gamepad and Wii remote with/without nunchuck or Wii classic controller options are a given, but throw in a Gamecube controller adaptor—with slots for up to 4 controllers—and you can dust off your Wavebird or stock purple ‘Cube controller lying around in your closet and bring it like it’s 2001 all over again! Then again, if you’ve gotten really good at the 3DS version of the game and find it hard to go back to a more standard controller play style, you can always connect your Smash Bros enabled 3DS to your Wii U and use the handheld as a controller. There really are a ridiculous amount of options for how to play this game, and if you’re not careful, your coffee table will devolve into a pile of buttons, thumbsticks, cords and screens. 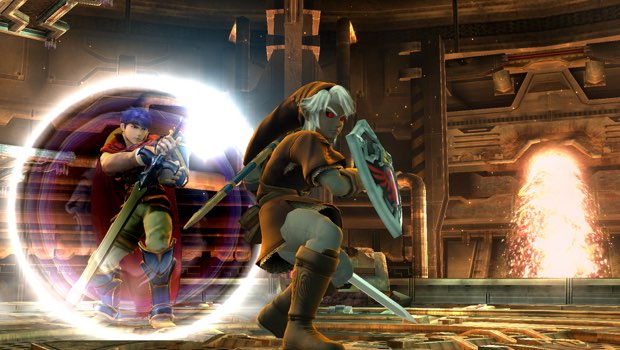 Both the 3DS and Wii U versions share the same selection of Nintendo’s mascots, heroes, sidekicks, villains, and oddballs, and 3rd party guest characters such as Sonic, Mega Man, Pac-Man. It would be nice if character unlocks were persistent across the two platforms, but that’s a minor quibble. Every character sports eight costumes, some of which are completely alternate characters. Including these, the roster caps at over fifty characters-an impressive feat. Each character’s moveset is directly inspired from the base game from which they originate. For example, playing as Mega Man feels just like a Mega Man game, utilizing his arm beam to launch an array of leaves at foes. Furthermore, like in the 3DS version, you can choose from 12 different variants of a character’s standard moves to assign to their four special triggers. Mii Fighters are here as well, coming in three base movesets: Brawler, Swordfighter, and Gunner. Each has access to 12 specials (various different attacks), entirely unique and thus, the Mii Fighters have a pool of 36 specials to choose from. Height and weight factor into the Mii’s performance as well, so each fighter is unique,  and very unpredictable. Creating your own Mii Fighter is loads of fun, there’s something special about being able to play as a Mii of yourself against Nintendo’s greatest. 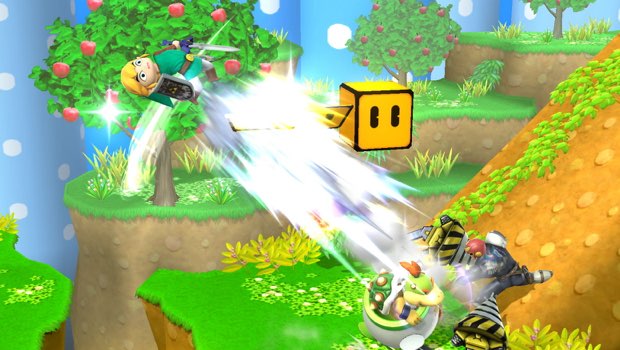 Launching with Super Smash Bros. is Nintendo’s line of NFC interactive figurines called “amiibo”. While the figures will eventually interact with several first-party titles on the system, in Smash Bros., each one can activate a non-player character that can fight against or alongside you in any mode in the game. All you do is simply touch the base of the figure to the gamepad on the character select screen and you’re good to go. Standard game NPCs have a maximum level difficulty selection of 9, but amiibo fighters can go all the way up to level 50, creating worthwhile opponents for even the best players. That progress is even saved in the chip on the base of the figure, so you can take it over to a buddy’s house and watch as he gets smacked down by your level 50 Mario. We tested the amiibo on the only other game that incorporates functionality right now —Mario Kart 8—but ,a Mario-themed racing suit for your Miis just doesn’t have the same punch as a customizable portable virtual fighting pal does. 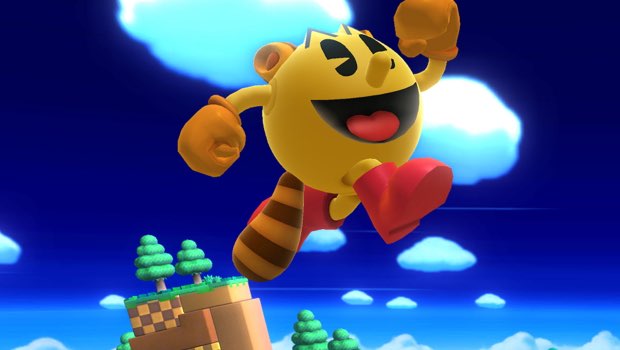 There are a wide selection of levels, each having more flat, competitive “Omega” form in addition to it’s wackier counterpart. There’s a good balance of totally new levels with levels from previous titles, adding just the right amount of nostalgia to satisfy long-time Smash veterans. Among the more memorable new levels are ‘The Great Cave Offensive’, the biggest Super Smash Bros. level to date, and ‘Jungle Hijinxs’, a level based on Donkey Kong Country Returns, with barrels that launch your fighters between the foreground and background. I was happy to see an old favorite return—Yoshi’s Island’ from Melee, a Gamecube classic.  All of the levels have a ton of stuff going on in the background, each adhering to the theme of the games they were derived from. Returning levels from previous versions of Super Smash Bros. look better than ever, and were obviously rebuilt to take advantage of the HD graphics of the modern system.

Super Smash Bros. for the Wii U boasts an impressive amount of new and returning gametypes for both solo and group play. The ‘Classic Mode’ game type gives up to two  players the choice of who to battle, as opposed to navigating through a maze like previous installments. The new ‘Master Order’ and ‘Crazy Order’ modes accompany Classic Mode, where players are given the option to partake in battles in exchange for gold (earned through most gametypes), the ‘Crazy Orders’ being more chaotic and challenging, but at a higher stake for prizes. ‘All-Star Mode’ is different as well this time around, having up to two players battle fighters in the reverse chronological order in which they debuted.  The ‘Events’ mode returns from previous games in the series, and pits players off in set scenarios and conditions. ‘Stadium Mode’ is back, including ‘Target Smash’ , the Angry Birds-style game type from the 3DS version , allowing up to 4 players launch a bomb at an assortment of stacked blocks and targets and ‘Multi-Man Smash’ pits up to 2 players up against an assortment of CPU Mii Fighters. There is also a new exclusive mode, ‘Board Game’, where up to 4 players can choose a Mii avatar and collect bits and pieces of upgrades on a game board, as well as fighters to use in battle. This mode is an interesting diversion from the rest the game has to offer, but definitely made with more than one player in mind. Stage Creator returns, but feels like a downgrade to Brawl’s functionality. As opposed to having a toolbox of blocks, platforms, and such in Brawl, players are limited to using the Wii U’s gamepad to doodle very limited platforms. 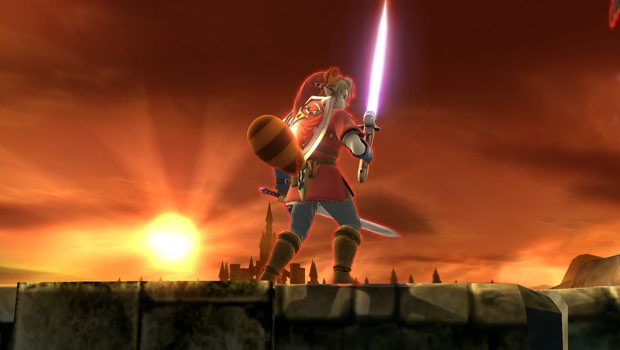 Of course, none of those compare to the main attraction— Multiplayer Smash. Getting a bunch of your friends in the room to beat the crap out of each other with Nintendo’s stable of characters has always been a hallmark of the series, and the level of polish afforded this mode of the game does the franchise proud. Like in previous installments, weapon and item drops spice things up, and with new additions such as the Boss Galaga item (which hovers around the top of the screen and brings an unlucky player out of bounds to be KO’d) are even more disruptive and game-changing. In fact, not a whole lot has changed in the core gameplay mode, and that’s a good thing. Veteran players will feel right at home, and the formula works so well that newcomers to the series will become diehards in no time.

Of course you might not always have a room full of people to play with, and like any good fighting game these days you can hop online in a variety of game types and wail on complete strangers from the comfort of your home. Players can choose from the casual ‘For Fun’ mode, where items and wacky stages are enabled, and the more competitive ‘For Glory’ mode which requires fights to occur on Omega stages with items disabled. Both options can be played as either free-for-all or team battles, which have local support for up to two players. ‘For Glory’ was my favorite online game type, as it had just the right amount of competitiveness that I’ve grown accustomed to with this series. You can also watch other players and bet gold on who they think will win in ‘Spectator’ mode; if you bet on the winner, you get rewarded with gold. If they lose however, you lose gold. I’m more into actually getting into the action rather than watching it, but still, a rather fast way to collect gold. 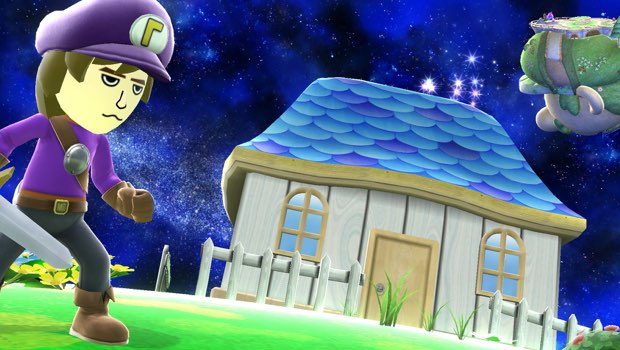 All of these features add up to nothing less than a fantastic sequel to one of Nintendo’s most beloved franchises, but there is one feature that takes the game to another level, and the fighting game genre into new territory: 8-Player Smash. Long-time players of the franchise will no doubt have memories having to trade off controllers to accommodate the four-player limit while having a group session. That is no longer a problem, and expanding the limit to a whopping eight players ramps up the chaos and fun significantly. Remember that pile of controller options I mentioned earlier? All the better to facilitate these epic battles (with the exception of the 3DS, unfortunately). It was clear looking over the room that this was something special, and while large scale battles online in other games and game types have become a relatively normal occurrence, eight people in your living room whooping and hollering at the screen needs to be seen to be believed. If you are a Smash Bros. fan, the grin on your face after playing this mode for the first time will stretch from ear to ear. 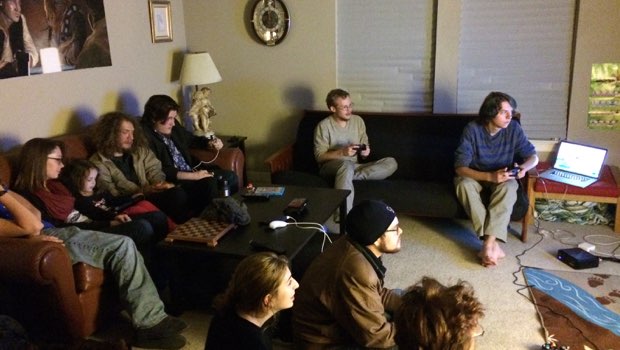 Super Smash Bros. for Wii U

Super Smash Bros. for the Wii U exemplifies the best the console —heck, Nintendo itself- has to offer. The overall experience has a trim and polish that is exceptional even by Nintendo’s standards, and while there are a few nitpicks that longtime fans of the series might find, it’s hard to argue against this being the best game in the series to date. There’s never been a better reason to invite a room full of people over to your house.

Griffin enjoys all things of the macabre and unordinary. When he's not playing video games, he can be found slinging bowls of ramen at the ramen shop he works at. Smash Bros. is his favorite game, and Griffin is a tried and true Link player.
Related Articles: Super Smash Bros. for Wii U
Share
Tweet
Share
Submit