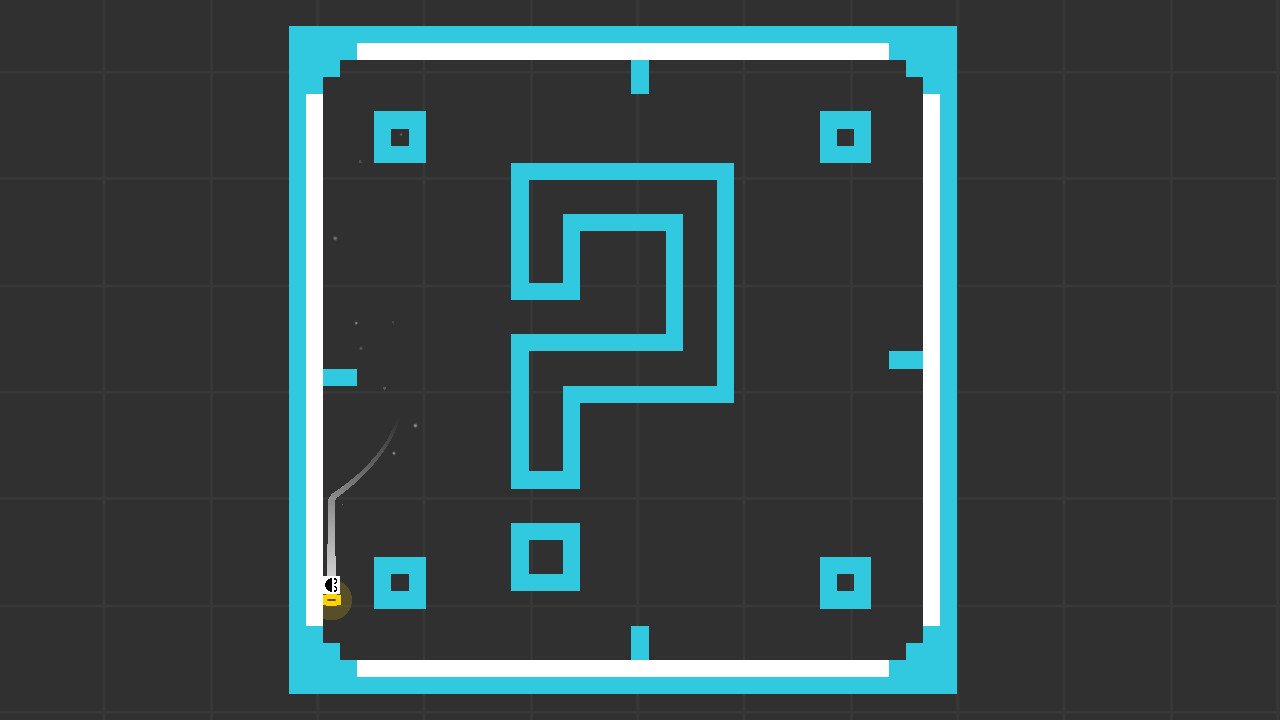 January and February are usually rest months for gaming, as we’ve already exhausted our budgets on the hottest holiday titles. These break periods result in some smaller titles coming out of the woodwork, quite a few of which are enjoyable and worth a download. One such game would be SMG Studios’ Super One More Jump, an expanded mobile port that mixes pixel perfect jumps and a customizable aesthetic to create a fun bite-sized platformer that’s as enjoyable as it is frustrating.

An expanded version of the mobile game One More Jump, Super One More Jump is a simple twitch-reflex platformer where you guide an automatically scrolling small figure to a goal point. Your only command is a jump button, which is triggered by any face button press (or by tapping the touch screen). Any surface on which you cannot jump is lethal, and one misstep will send you to the beginning of the stage. It takes some sharp hand-eye coordination and reflexes in order to complete the ninety-six base stages (eight packs of 12 stages each) as well as some other unlockable modes. Your main goal is at the end of the stage, but there are three collectable items which you can collect to unlock different icons and visual filters, among other things.

The one button control scheme is simple yet very deep, and it’s easy enough to play the first few stages with ease. While it does take some time to get used to the physics of it, Super One More Jump ends up with tight controls that test your jumping skills and patience, as each platform has its own gravitational pull: jumping and missing a platform means you’ll rotate on your current platform. This sometimes is a necessity, as there are some switches or obstacles you’ll need to traverse on different sides. It can feel disorienting, but the way the game handles this is adequate.

The gameplay is also very unforgiving at times, as scant milliseconds can be the difference between life and death. The game thankfully restarts immediately, with the shadowy outline of your corpses to mark where you shouldn’t jump. It’s a subtle addition, but a great one that balances the unforgiving nature of the gameplay. After dying half a dozen times (or more), you can really start to gauge where you should jump, and you’ll quickly pick up where you need to jump and succeed. While I do appreciate this trial-and-error approach on most stages, there are a few that feel like a battle of attrition rather than a quick bite-sized stage. These longer stages feel a bit uncomfortable, since they feel more frustrating due to the greater margin for error here. These longer stages are only present in the later stage packs, so it’s not a huge problem, but it can be annoying when it feels unfair. However, you can also choose to practice stages, which can alleviate this frustration.

For an expanded mobile port, Super One More Jump looks and plays very nicely. The original 2D graphics from the mobile game are present, but you can easily switch into different pixel art styles from other guest artists. These visual changes spice up the game’s looks, and while the physics and difficulty remain the same, this does add a hint of customization to the experience. (Plus, there’s a theme that has a mini Shiba Inu as a player icon, so that’s adorable.) The game runs very well on the Switch, and I saw no slowdowns during my playthrough. This is crucial in twitch-reflex platformers, and the developers nail the performance perfectly. The only misstep in the presentation is with its sound, as it’s something that remains the same regardless of visual theme. The electronic sounds are fitting for the game, but does feel repetitive and generic the more you play, so I wish that there were some more sound options with guest musical artists as well.

much doge, so pixel, wow.

Super One More Jump expands upon its mobile predecessor by adding unlockable modes after you complete a certain amount of levels, from an endless circuit mode (which is akin to an endless runner as you’re scored by how many jumps you can execute before perishing) to extra vault stages. If you have friends over, you can also participate in up to four-player co-op or two-player endless modes. After collecting all three collectable items in a stage, you can replay it with three different visual filters (from a mirror mode to a night mode). It’s these extras that justify the affordable seven-dollar price tag, and the additional features round out the package nicely.

Super One More Jump is a fun, little platformer that fits very well on the Nintendo Switch. It’s unforgiving yet engaging gameplay mixed with some snazzy visuals will have you coming back for one more attempt.

Elisha Deogracias is an aspiring accountant by day, freelance writer by night. Before writing for Gaming Trend, he had a small gig on the now defunct Examiner. When not being a third wheel with his best friends on dates or yearning for some closure on Pushing Daisies, he's busy catching up on shonen manga and wacky rhythm games. Mains R.O.B. in Smash. Still doesn't know if he's a kid or a squid.
Related Articles: Indies, Super One More Jump
Share
Tweet
Share
Submit