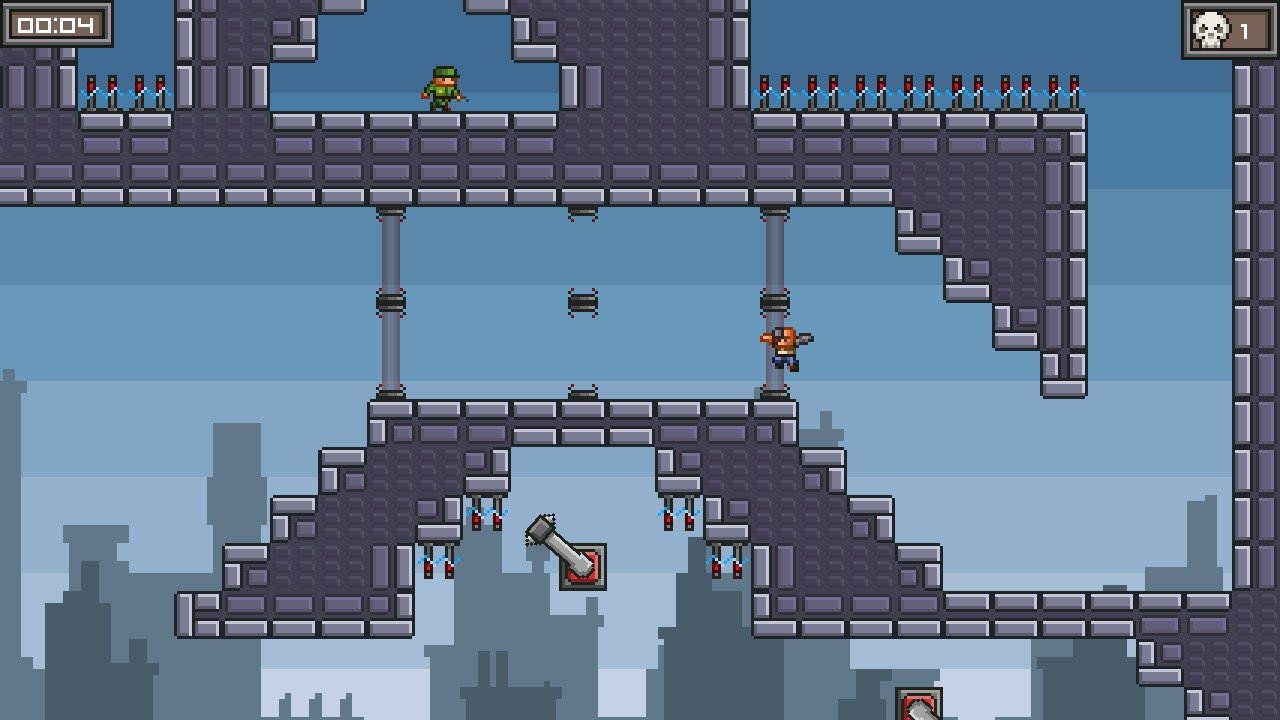 It’s been barely six months and the Switch has already attained some great acclaim with its games. From the universal praise of Breath of the Wild to the surprise success that was Mario + Rabbids, the little console that could has made a splash with its library. With Super Mario Odyssey on the horizon, it seems that we’re getting into a time of ports, from the already released Mario Kart 8 Deluxe to the oddly announced L.A. Noire and Syberia ports coming out soon. Ratalaika Games has added Woblygames’ League of Evil to this list, and while it does show its age, it’s still a pretty entertaining port with some improvements to add to the experience.

League of Evil pits you, a nameless bionic agent, against a horde of baddies. In each of the four chapters, you’ll be tasked with completing a slate of levels where your goal is simply to kill an evil scientist (as well as obtain an optional briefcase). You’re only given a few moves to work with, however: a double jump, a wall jump, and a kick. This simple two button control scheme is functional for the amount of platforming you’ll be doing in over a hundred levels of the main campaign. While the controls are simple, the levels can be a little more complicated. The agent can only take one hit before perishing, and with a bunch of hazards trying to eliminate you, you’ll have to be quick and precise in order to score a decent time. (As this is a port from the 2011 game of the same name, expect there to be stars as a grade.)

One main improvement over the original mobile version is the controls. As League of Evil is a twitch-based platformer, you need precision to enjoy this title. Having buttons instead of touch controls works much better, and as such the game is a little more fluid than its mobile counterpart. However, unlike Slime-San, which uses its jumps perfectly, the physics here feel a tad off. While the feeling will go away, the way the wall jumps have an odd arc that the agent follows when hitting a wall. While this doesn’t feel significant, in the long run it’s a pretty big annoyance on levels that are reliant on this technique. In addition to the wonky jump physics, sliding down a wall seems clunky and unresponsive.  I don’t mind hard titles where it’s my fault that I died, but when I’m actively fighting the controls and that’s causing me to lose? Not a great thing.

The presentation is a mixed bag too. While games like the Mighty Gunvolt Burst and the aforementioned Slime-San have shown us how to do vibrant pixel art on the Switch, League of Evil seems stuck with its 2011-era pixel style which, while adequate, fails to make the game stand out in the sea of 8-bit games out on the console. The graphics are slightly drab and pale in comparison to the brightly colored competition, and I really wish the game had a fresh coat of pixelated paint. It’s not an innovative palette, but it’s sufficient enough.

The music is pretty frantic and energetic though, which was a high point when I was playing for a speedy time. I also enjoyed how easy it was to jump back into the action after I died (which was often), and this encourages rapid play and rewards trial-and-error gameplay with the “I almost got that! One more time!” approach.

But you know what we’re missing the most on Switch? A Super Mario Maker port. In the meantime, League of Evil has a level editor, and it’s easily the most appealing part of the package. You can create your own levels via buttons or the touchscreen, and it’s pretty easy to edit layouts and enemy placements. If you can beat your own level, you can upload your creation so that others can download it, and you can download hundreds of levels yourself. It’s a great way to add longevity and replay value into this game, and it’s pretty interesting to see what sadistic challenges other players have uploaded. I’d say the level editor is worth the admission price for League of Evil alone, and that’s saying something.

League of Evil has its faults, but it more than makes up for them through its robust and accessible level editor. While it’s a six year port that shows its age, it’s still a great way to get your twitch-reflex platformer fix.

Elisha Deogracias is an aspiring accountant by day, freelance writer by night. Before writing for Gaming Trend, he had a small gig on the now defunct Examiner. When not being a third wheel with his best friends on dates or yearning for some closure on Pushing Daisies, he's busy catching up on shonen manga and wacky rhythm games. Mains R.O.B. in Smash. Still doesn't know if he's a kid or a squid.
Related Articles: Indies, League of Evil
Share
Tweet
Share
Submit