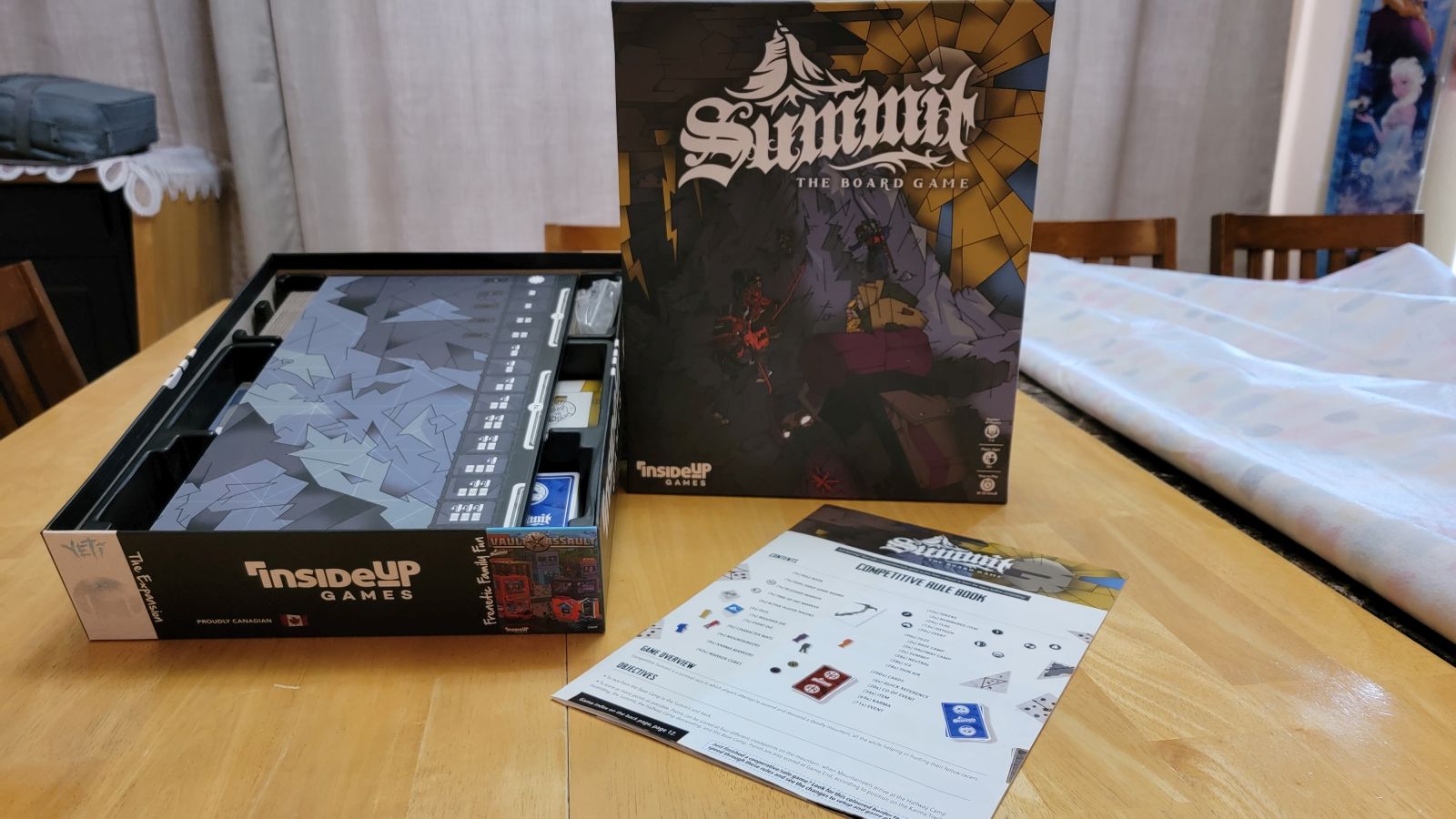 Mountains in all of their majesty provide a plethora of different experiences for all walks of life, whether you go camping, hiking, or even mountain climbing. Being a mountain climber is not for the faint of heart and takes a considerable amount of preparation. This brings us to the game Summit by Inside Up Games. Many games struggle to convey what an experience would be like going from a real life activity to a board game version of said activity, but from the basecamp to the top Summit provides a unique experience in board gaming and can show the dangers and excitement of scaling a mountain.

In the time I have had to enjoy Summit a few things stand out and that is a decently clear rulebook, solid art, well designed components, and a fun experience overall. If you are playing the competitive version, that is. Wait, competitive? Yeah, competitive and cooperative versions of the game present different options for different play styles that game groups can experience. 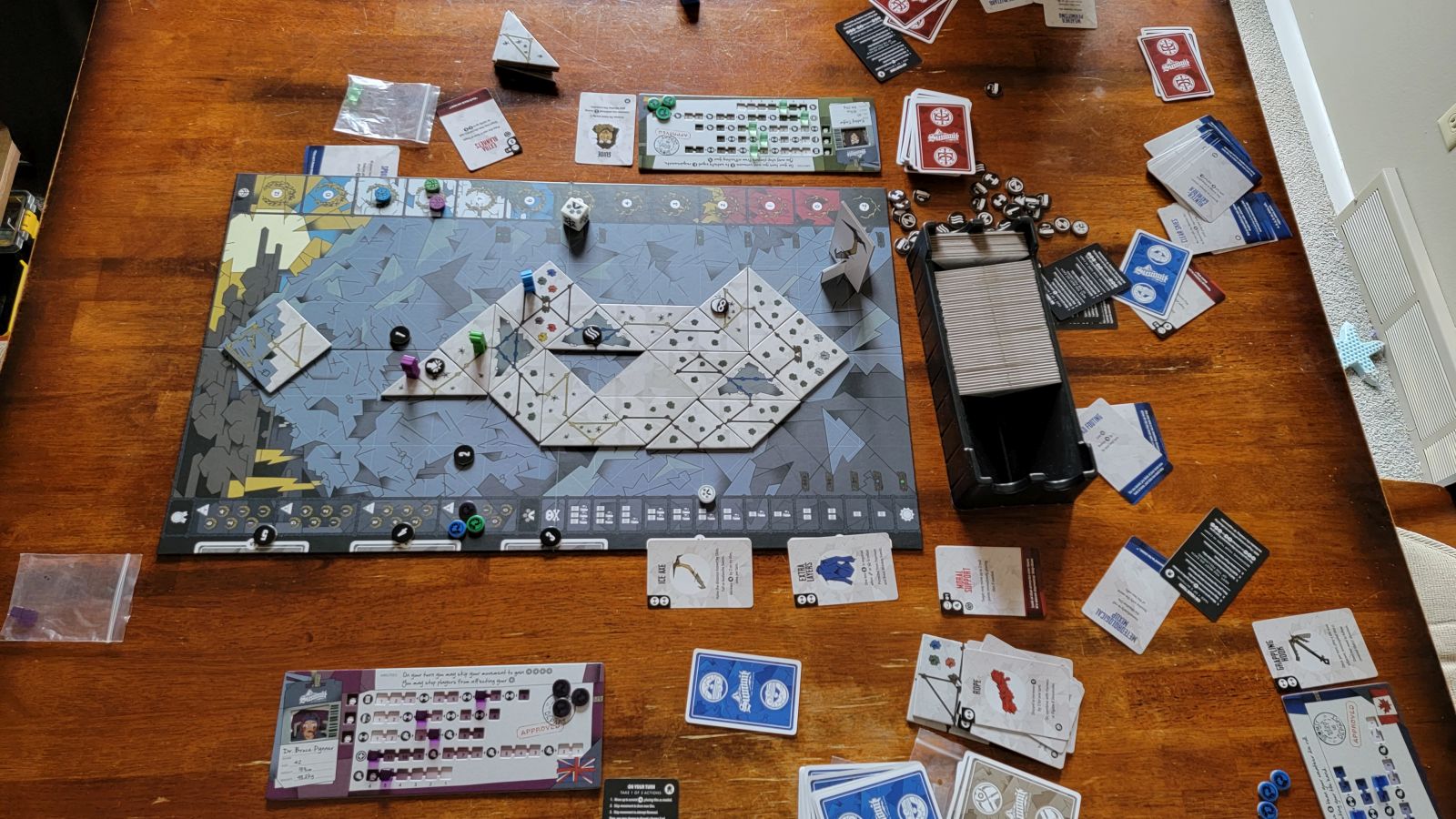 In a game of Summit one to six players take on the titular task of summiting a mountain and making the dangerous trek back down to the basecamp. On the one hand, the competitive version finds players battling to the top of the mountain to gain the most prestige and have the best karma by the time they make it back down to basecamp. On the other hand, the cooperative version finds players trekking to the summit of the mountain as a group, helping one another along the way while trying to get everyone back down to basecamp safely after reaching the summit. Different types of play meant different rulebooks for Summit which help players progress through the game by providing clear rules for completing a trek to the summit and back.

With a game designed for one to six players like Summit is, you could imagine how summiting a mountain and getting back down to the basecamp you started from could be an insurmountable task. This is especially true when players have limited oxygen and food they can bring with them. In one of the more unique and exciting ways that Summit truly immerses you into the role of the mountain climber, the player boards for Summit, provide five different trackers which take on the role of individual supplies and a smattering of other things. These tracks correspond to food, oxygen, weight, health, and speed. What makes them unique and highly thematic is, the more food and oxygen you carry with you, the higher your weight goes. Then the higher your weight goes, the lower your speed gets because you are carrying too much weight. But so much weight is needed to survive the dangerous trip up and down the mountain. Lastly, as you run out of food and oxygen, and you cannot pay the required food/oxygen cost in a turn, your health starts declining which results in lower speed. All of this combines to provide a highly thematic, unique player board, and experience which definitely gives players the feeling of climbing a mountain. 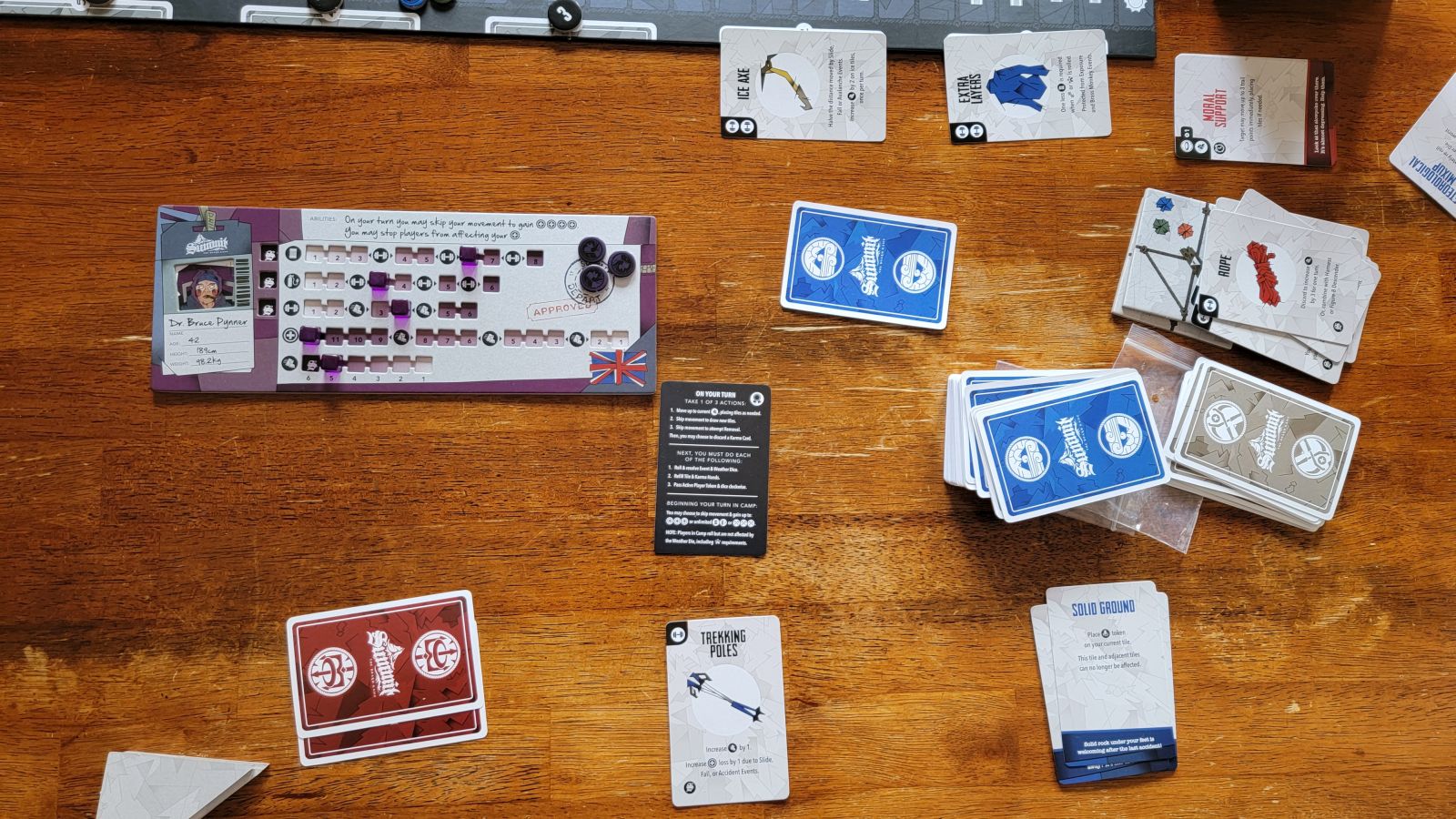 To top that all off there are item cards in the game that players can take with them. Some item cards give players extra weight and lower their speed, while others have no weight but are one time use items. Players may also drop items in order to speed themselves up much like real climbers could in real life. All in all, players really become immersed in reaching the summit and journeying back down to the basecamp.

Turns wind up being fairly simple, players take their climber and move them up the different spaces on the board journeying towards the summit of the mountain. If the board does not have a tile on it as a player journeys upwards, then the active player lays a new tile which has one of three colored ropes that provide different situations for climbing the mountain. These different colored ropes either add an overabundance of ropes to the new tile(not ideal as it takes more moves to get passed these tiles), less ropes but a thin air tile, meaning it costs oxygen to move into the tile, and lastly just a plain old regular rope tile which has no extra meaning just provides the spaces to move forward. Here is where the differences between co-op and competitive stand out. In co-op players are allowed to skip the space another player might occupy in front of them, i.e. not count that space against their movement. In competitive games players have to ask other players that might be in their path for permission to move past them. 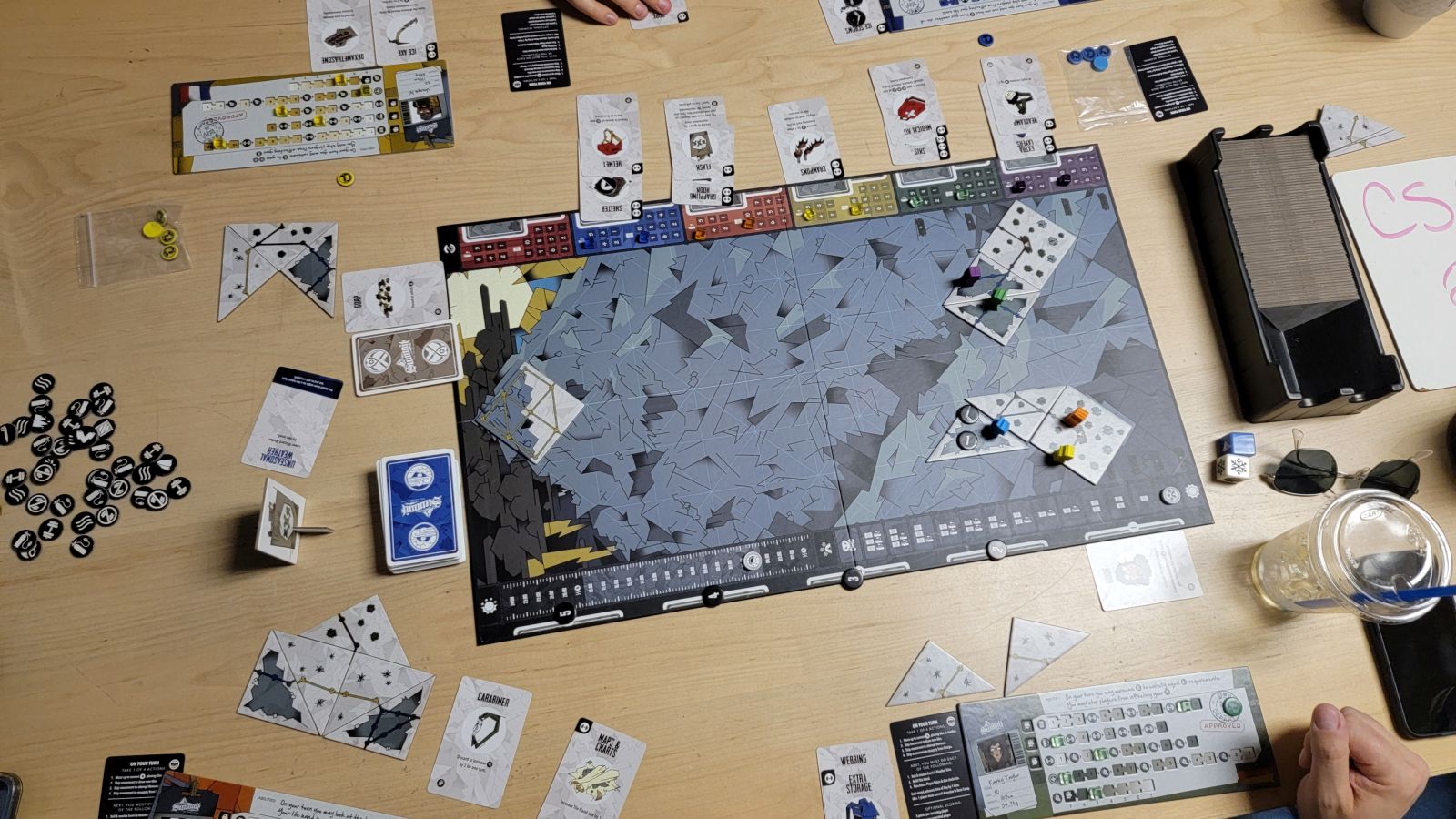 This is where the karma track comes in and players that allow this to happen gain a karma, however if a player denies movement to a player behind them, then that player who blocked the movement loses karma. At the end of the game Karma winds up being worth points. There are also karma cards that allow players to do things to each other if one player is being a jerk and not letting another player move past. Mainly in the competitive version of the game players gain more prestige by being the first one to reach midway camp, summit, midway(descending), and finally basecamp. By reaching any of these second or later you receive less points and ultimately the player who reaches these milestones first typically will wind up winning.

Whether you are playing cooperatively or competitively there are event cards and the pair of dice that get rolled at the end of every player’s turn. These event cards and dice can have a major effect on the overall way a game of Summit is played. The blizzard dice, which is one of the two dice, informs players how much oxygen or food they must pay this round, or making the entire group pay supplies if it is rolled. The event dice, on the other hand, can offer either good or bad events. The event die informs the active player whether they draw and play an event card or not. These event cards dictate something that happens typically to the active player, saying things such as gain this, or lose that, or even going so far as to say use the event card at any point when the game says to consume oxygen. After these happen the next player takes their turn and the game continues until at least one player has made it up the mountain and back down to the basecamp, with all other players doing the same or dying on the way. 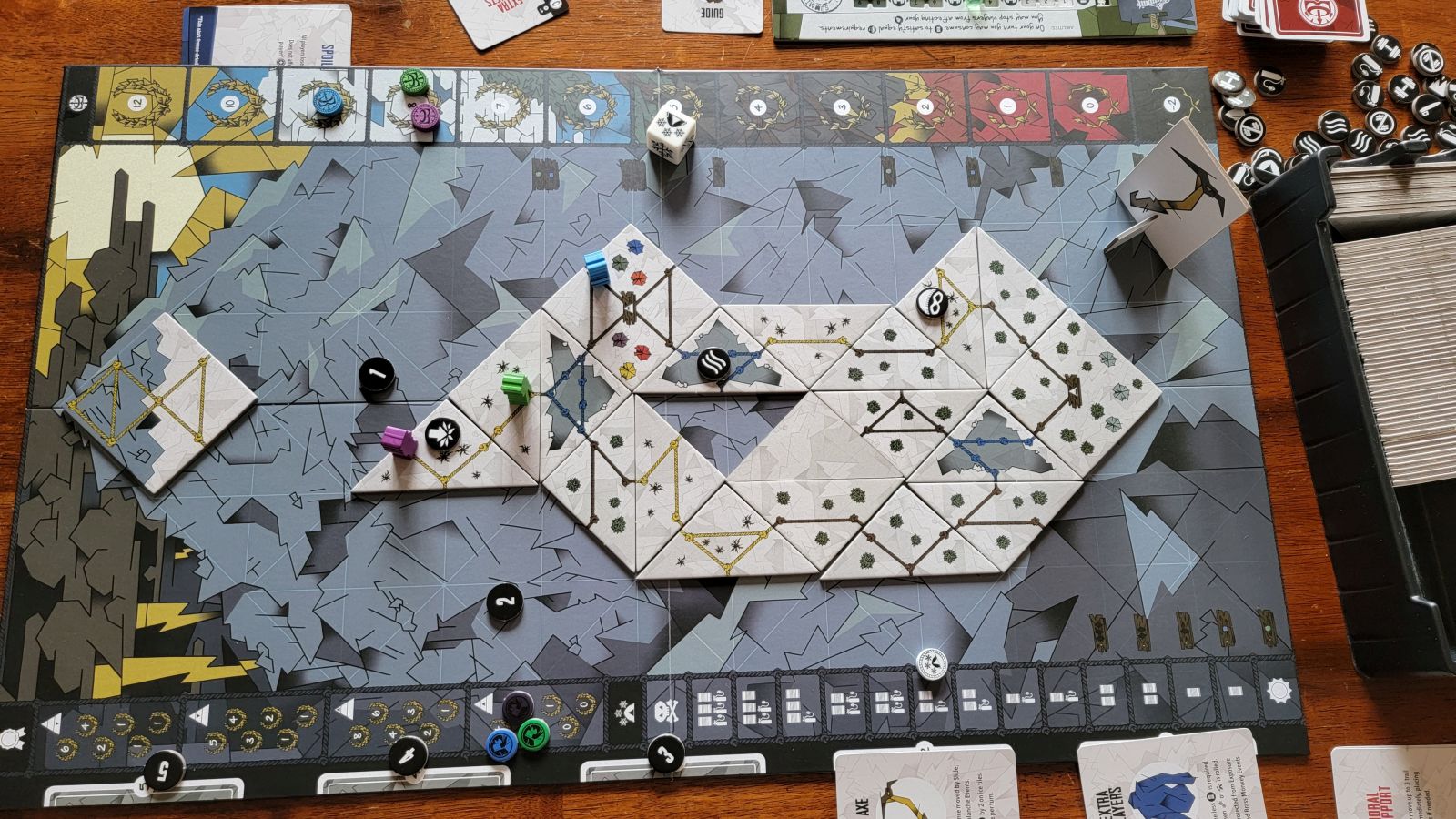 Summit gives players a false sense of “oh man, this game is fun” and “this could be easy”, but there are many difficulties to play on and playing on harder difficulties is not for the faint of heart. In my experience the harder difficulties took the game from “oh hey we can increase the challenge to have a bit more fun”, to “if we increase the difficulty, winning will be super hard and almost impossible”. While this might not seem like the biggest deal, it can affect the overall fun factor that players get while playing Summit. Then there were the separate rule books and trying to keep track of those based on which mode of the game you are going to play. Also, some of the event cards are unreasonably brutal.

For me the competitive mode was easily the best of the two modes. While cooperative was not bad, there felt like there was no driving force to play cooperatively other than to experience what Summits coop would play like. If the game had something along the lines of a story for the cooperative mode, or if there were more real stakes playing cooperatively, the co-op version of Summit might not have fallen as flat as it did. While I do not typically play games that make players suffer, the competitive and take that elements of Summit really makes the game feel thematic and fun, and is what drives Summit forward as a board game.

Summit The Board Game

Overall Summit is a game that thrives on its theme and wants players to really immerse themselves as a mountain climber during the game. Between the box holding components well and the lifeless eyes of the characters, Summit has its own sort of charisma that is unique. The board takes up a bit more space than it should, and the set up/rules explanation can be a bit of a bear. Summit at first glance may seem like it is a board game that sits atop the rest of them, however Summit suffers from a few bugs in its system and ultimately winds up being something I look at on my shelf and say “hey I would play something different”.