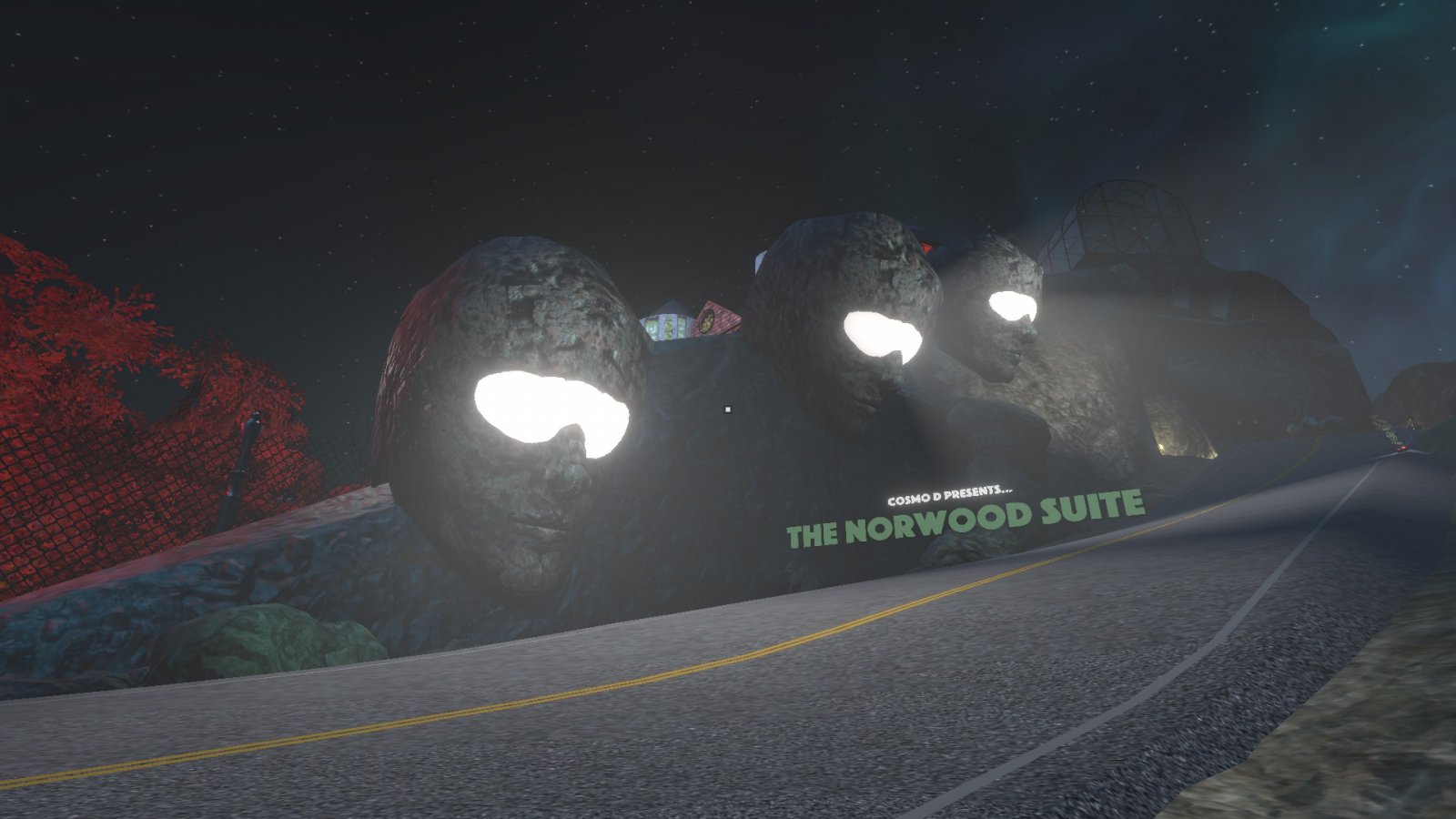 The Norwood Suite works well as a free mix-tape, but I wouldn’t tolerate it as a full album

Why do you play games?  Have you ever wanted to make one?  After playing through the brief Norwood Suite, which follows the indie freeware title Off Peak, I’ve been thinking about these questions.  The game is the work of a single creator (Cosmo D.), and one cannot help but wonder what games are to them as an individual.  Personally, I wouldn’t call this game “fun”, but I was both intrigued and compelled by it.

I would suggest that if at any point in this review you are interested in the game, you should go and play it.  It’s on Steam, and isn’t particularly long.  It is a surreal first person point and click adventure game about music, wandering artists, corporate influence, and searching for what’s missing.

The game opens with you being dropped at the bottom of a hill at which the Hotel Norwood sits atop.  The game cleverly uses the ascent up the hill as both an opening title sequence as well as a tutorial.  Once you reach the top most of the game’s environment is open to you, and its story unfolds through the characters you come across and the arrangement of props.

The hotel, as you quickly learn, was once owned by the titular Norwood.  A composer, he established the hotel as a place for artists to create things, but later had to sell it to make ends meet.  Now it is apparently ridiculously expensive, and is being used as a prop for a corporation to roll out their new energy drink with a 48-hour non stop DJ set.  The musical theme is repeated in the game’s sound design, with all of the hotel’s inhabitants speaking in musical phrases.

The Hotel Norwood is an impossible and surreal setting.

While the game doesn’t really set up its long term goals up front, it sets you on a series of small fetch quests.  These amount to pixel hunts through the environment, and hopefully lead you to have a series of questions about who Norwood was and what mysteries are housed within his hotel.  As you find many of the objects you are tasked with collecting, you gain access to a series of shortcuts through the hotel which show tableaus of Norwood’s time at the hotel.

The aesthetic of the game is both crude and abstract.  It may be that they are the product of the creator’s limitations, but they seem to revel in it.  With experimental 3d artists finding sizable followings on instagram and being featured on Adult Swim’s online collage “Off The Air”, The Norwood Suite might be inhabiting a convenient moment.  However, while the surrealist art that seems to be gaining traction in pop culture is often visually crude, it is almost always an exercise in technique.

The characters are all fixed in place and music plays as they speak.

The Norwood Suite, by comparison doesn’t seem to display much in the way of visual technique.  It’s hard not to notice, as an example, that none of the characters ever really move from their positions in front of the player.  In the rare instance that they do, the animation is amateurish and stiff.  Even so, I kept wishing that there was more animation.  The strange setting is a friendly canvas for what amateurish animation is included. Additionally, the story of a composer struggling to write their masterpiece seems to frame all artistic pursuits as sacred.  Not leaning into their lack of animation chops actually seems like a missed opportunity that would have tied into the game’s meta narrative.

Texture quality is all over the place and undermines the notion that the graphical quality is intentional.

The game’s textures may have been another embrace of their lack of resources, but some props have textures of varying resolutions and quality.  Many objects that the player is meant to look at more closely will have legible text, while objects that they are set on are a confused patchwork of poor quality and even untextured portions.  It’s easy to imagine that Cosmo D. went into this knowing that they were targeting a lower level of visual fidelity, but never codifying it into a spec.

The game doesn’t ultimately suffer from its technical issues. Instead I felt more like it was muddled by lack of creative cohesion or foresight. The game’s story was intriguing, but doesn’t really resolve in a manner which is coherent. The level of visual fidelity works, but doesn’t entirely seem premeditated. Yet it’s over very quickly, and in its broad strokes paints a captivating picture. Had it required me to spend more time to reach its pay off, I might have been bothered by this. To compare it to music, this works well as a free mix-tape, but I wouldn’t tolerate it as a full album. That said, I’m interested in what the artist’s point of view is. If they were to be signed, I’d likely want to check out what they could put out with the support of a record label.

Based in LA, but born and raised in the SF Bay Area. I've been an avid gaming since the first time I laid hands on my cousin's NES. I've always seen myself as both a console and PC gamer, but in recent years I've become much more of a PC gamer. I love weird and experimental games, challenging RPGs, and (most of all) I am obsessed with rogue-likes.
Related Articles: Indies, The Norwood Suite
Share
Tweet
Share
Submit