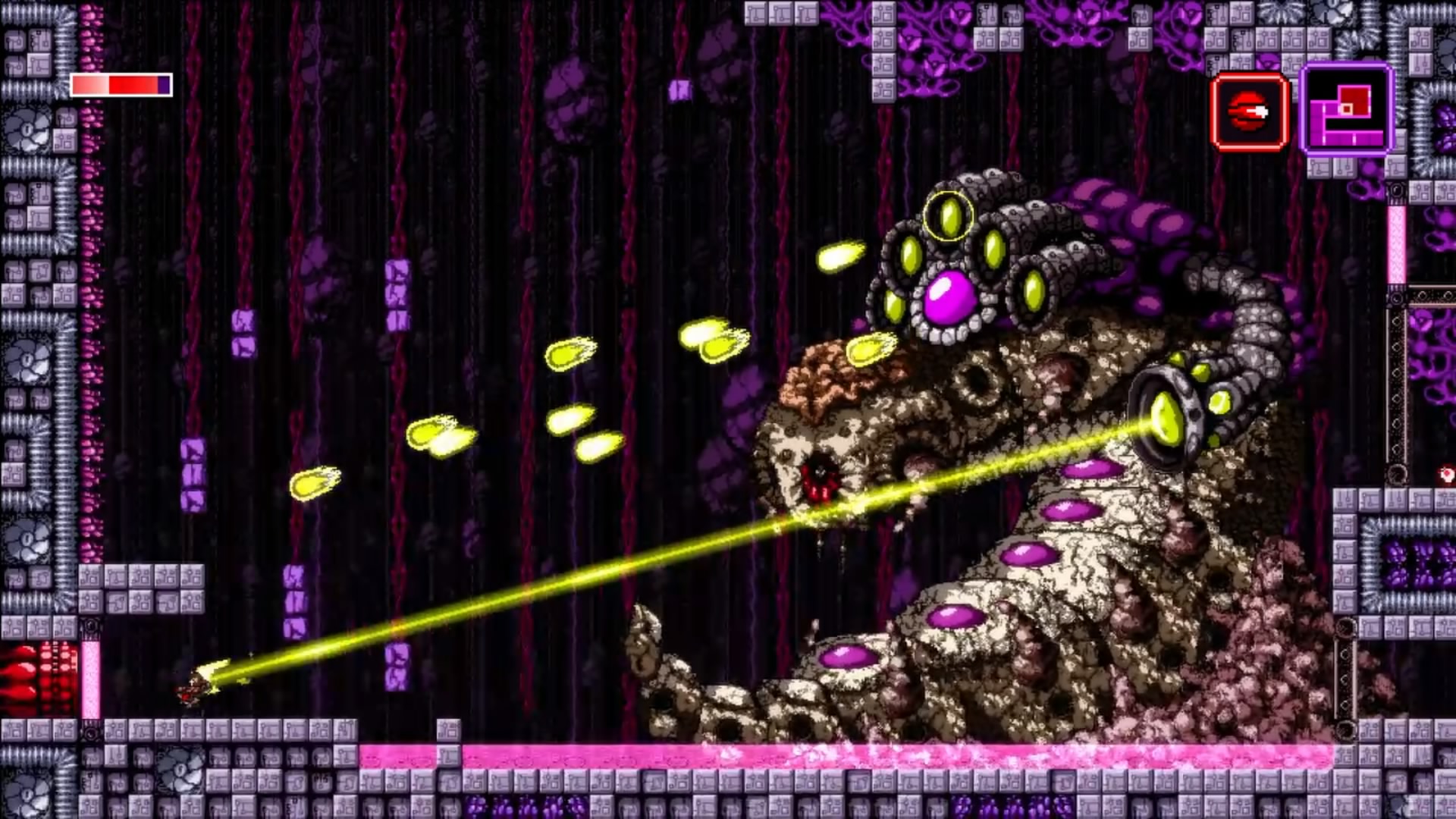 Axiom Verge is, at its core, a retro-style indie game. That term gets thrown around a lot, used to cover a wide variety of games that involve 8-bit music, pixelated graphics and challenging 2D combat and platforming.

What sets Axiom Verge apart, though, is not only how it revisits the best of greats like Rygar and Super Metroid, but how developer Tom Happ reinvigorates every room, every map, and every square pixel with new life. This is a modernized classic, blended with Contra-style shooting and a mass of powerups to hunt down, with a host of new tools and abilities that are fresh and exciting to use. This is what makes indie development so special, in how Happ takes a standardized formula and simplistic mechanics and builds them into something greater.

There are no rose-tinted glasses here – Axiom Verge stands tall as one of indie gaming’s finest achievements yet.

The few story cutscenes are told through stylistic 8-bit stills and scrolls.

After an explosive – literally – opening cinematic, you are placed in the shoes of Trace, a scientist with no recollection of why he’s awoken to a world not quite like his lab. From the outset you are greeted with imagery of machine and man in macabre singularity. Metallic, industrial walls are lined with oozing blood pustules and fungal growths. In your fright, you’re contacted by an AI who calls herself Elsenova – a Rusalki war machine left to rot in a world that was not always this grim. She can only muster the strength to guide you to a gun and give you a single request: if you want to know more, find and fix me.

Sudra, as you find out, is the world in which you have found yourself. A not-quite-parallel dimension to Earth, there’s a lot of lore and lost history to discover for those willing to dig. Even if you aren’t the kind to pour over hidden notes and theorize potential timelines, even just the setting of Axiom Verge is diverse and intricate enough to demand questions. How can a wasteland have become so barren? Why is there a strange mix of biology and technology in these creatures? Why are you, Trace, able to interface with these machines – and why do you turn to a red dust each time you die, respawning in an egg-like cocoon?

The stark contrast of man and machine is beautifully portrayed in Elsenova and Trace.

These questions will be answered by the time you take down the final boss. Trace’s story, spurred by constant pushing from Elsenova and empty promises of answers, is compelling and thoughtful. By the end, you’ll be questioning what exactly happened – and you’ll want to re-Trace again, going back through the many maps and bosses just to try and get a handle on the underlying story.

The bright colors and stark contrasts of the world of Axiom Verge are fascinating, but you will occasionally have issues with discerning some of the foregrounds against the backgrounds. It rarely impeded progress, but getting lost in the environment can be a double-edged sword. The aesthetic is absorbing, and the music is catchy and changes to fit the mood of each new area, but a few off-color platforms or blurred outlines might make your jumps a little harder to land. You’ll also find yourself constantly backtracking, as there’s no warp or fast travel system. There is a train-esque rail you unlock later that can move you from map to map easier, but even navigating in and out of the maps to the “train” hub requires a lot of leg work.

Get used to seeing a lot of this “train,” as it’ll be your primary means of moving between large sections of Sudra.

That task is made rather enjoyable, however, by the brilliant combat and platforming. Starting off with a simple jump and a puny blaster, your tool kit will expand greatly over the course of the ~10 hours it’ll take to make your first run of Axiom Verge. Trenchcoats give you the ability to phase and eventually dash through objects, a grappling hook gives you a Bionic-Commando-style solution to low ceilings and distant platforms, and the drill is simple in design but invaluable in its many uses.

Your gun keeps things fresh too; much like Samus’ arm cannon, your gun is a single weapon with many attachments and upgrades. Some are simple range and damage upgrades that span across your arsenal, while others are new modes that change it completely. There’s plenty of tools and tricks you’ll accrue that open up new areas and maps, but one I want to discuss in particular is the Address Disruptor, which allows you to manipulate the game itself to overcome obstacles. You can alter enemies into different, weaker states, or turn them against each other, or even use them against the environment.

The Lightning Gun can do some serious damage, but has limits on the range of its electric arc.

The standard baddies of Axiom Verge run the gamut, from typical clamshell-type blobs that mindlessly crawl along surfaces to shrieking white ghouls that close the distance fast and ravage you with swift leaps and attacks. The bosses, however, are a different beast entirely.

At first, Axiom Verge’s bosses will seem a little on the easy side – clearly telegraphed attack rotations and giant purple weak spots that are simple enough to hone in on with your shots. A few bosses later, you’ll be under heavier fire, and have to utilize terrain crafted by your trusty Address Disruptor for cover as you slowly advance on an artillery-laden slug.

By the final boss you’ll have a playstyle all your own, and there’s truly no single way to conquer many of the latter half of the game’s big bads. The difficulty does ramp up noticeably, however, at around that very halfway point. I estimate that most of my 44 deaths throughout the course of Axiom Verge were tallied up while gathering the last few items I needed to scale the final tower.

The boss rooms in Axiom Verge can sometimes seem larger than life.

There are several ways to conquer each boss, but there’s always a fastest way, and that’s where speedrunning comes in. After the credits roll, you’re greeted with a tally of your final percentage in item and map completion, along with a death counter and time for the run. That speed may be slow first, but you’ll likely be dying to start right from the beginning again, perhaps without all the story cutscenes and text boxes. Luckily, developer Tom Happ has included a Speedrun mode, influenced by events like Awesome Games Done Quick, to allow both pro-runners and newcomers alike to constantly strive for a better time.

The Speedrun mode keeps a constant timer, down to the exact frame, of your entire run, and marks milestones at each boss. By your sixth run, you’ll know that you took a minute longer than normal to get to that second boss – or maybe you’re a minute faster, and you’ve discovered a better route! This is all integrated with Playstation Share, as well, so Twitch streamers who enjoy speedrunning won’t have to artificially implement timekeeping tools – they’re all built right into the game. This style of play isn’t for everyone, obviously, but it’s at least worth a couple tries to see how fast you can get to the first boss. You might surprise yourself with your own ingenuity.

There’s plenty of history and lore hidden away for you to uncover as your toolkit grows.

Axiom Verge is an indie tour de force, with few stumbling blocks and a host of fun, compelling content to explore. I finished my final run having found barely 50 percent of the upgrades and notes, a number that shocked me. I was convinced I had combed every crevice and explored everywhere, so after the credits rolled I immediately booted up another run. There was half an arsenal to tinker with waiting out there, and more lore to find and uncover. At one point, to understand the language of another species, I had to enter a passcode into the game’s retro-esque password system to translate the tablets. It was a moment of both self-aware nostalgia from the game and unspoken, intuitive puzzle-solving that floored me, and yet Axiom Verge is filled with these little moments that make it one of the most memorable indie games I’ve played, and ascends it to the heights of the predecessors it so reverently builds upon.

Tom Happ’s Axiom Verge keeps the best of the past and improves on every facet, crafting a game about singularity, identity and pure pixellated fun. This is concentrated, unfiltered, Super-Nintendo-excellence given the modern treatment, and a landmark indie title.