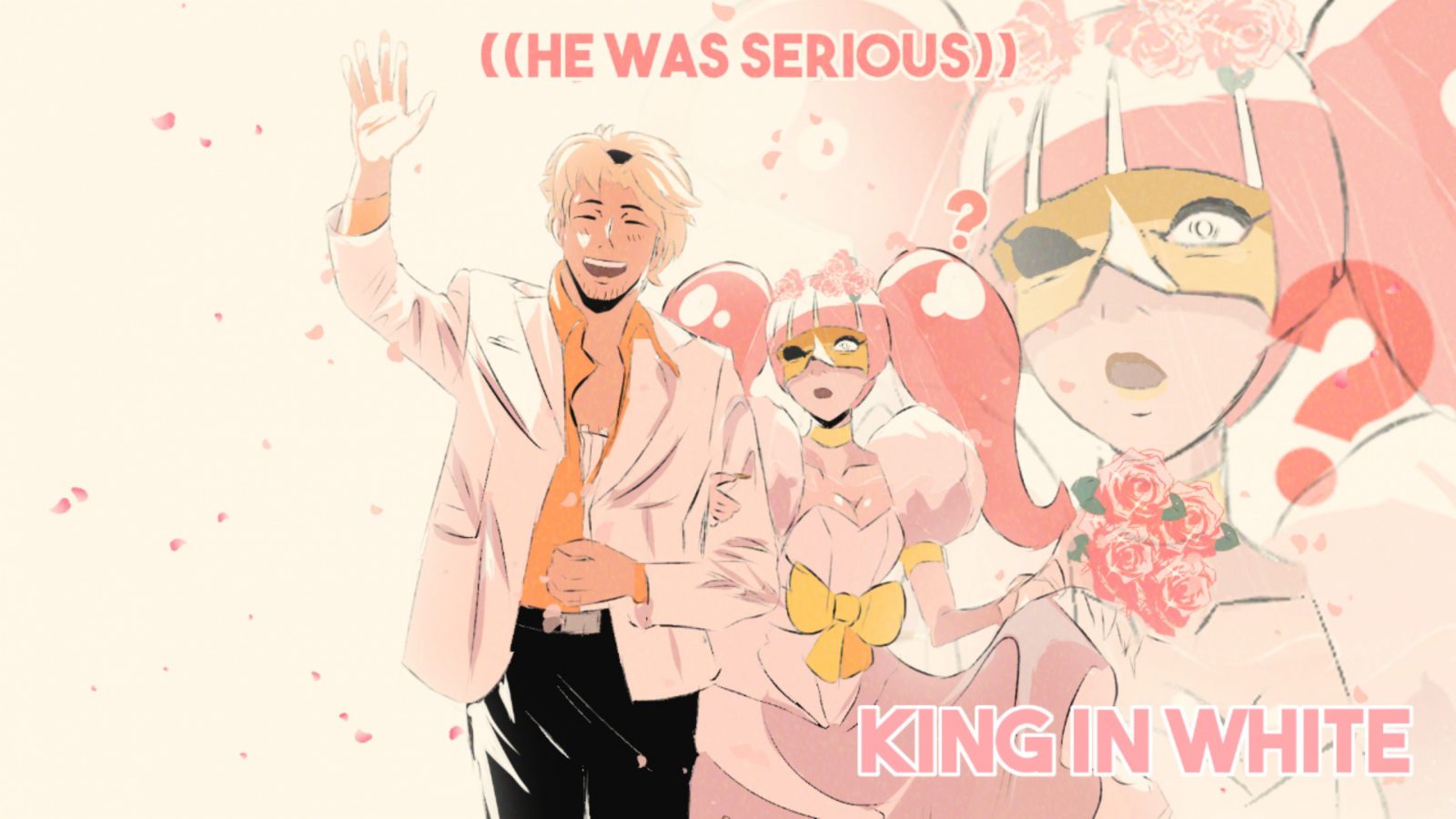 Humanity is secure in their ignorance of the elder gods lurking just outside our perception. They sleep and wait for the day when insanity will reign, when all men will be driven mad simply by gazing upon their forms, their true horror incomprehensible. But what if you found unknowable visages… attractive? Tentacles for a face? Yes please. Abhorrent rituals for date night? I’ve got my necronomicon at the ready. A six foot tall cat girl goddess who is actively trying to kill you? Step. On. Me. The end of reality is a small price to pay for a smooch from an eldritch cutie.

Sucker for Love: First Date is a visual novel with a mix of dating sim and horror game, both of which add up to some clever and hilarious comedy. You can summon/date three eldritch gods over three chapters: Ln’eta, a Cthulhu-esque squid lady; Estir, the King in Yellow who asks you to perform a play for her; and finally Nyanlathotep, the two sisters’ aunt who… doesn’t approve of you. Each chapter emphasizes a different aspect of the game, Nyanlathotep focuses on horror, Estir’s route is more comedic, and Ln’eta is a balance of the two. Despite a few small yet persistent issues, each route is well worth seeing through and getting all the endings.

Visual novels are arguably infamous for not having any “gameplay”, but Sucker for Love actually implements point and click puzzles for each date. Your apartment has several objects you can interact with, like clothing you can put on, candles you can light, and a poster you can remove. By scrolling to the right, you can also access the bathroom, along with the mirror, sink, and shower, and the door just outside your top floor apartment. At the bottom of the screen is the book corresponding to the cutie you’re currently trying to woo. Contained within are several rituals you must perform using items in your home to progress the date, such as converting the leftovers in your fridge to something more palatable by lighting some candles and chanting a phrase. Reading a phrase requires you to click and hold on the first letter, then slowly move your mouse across the sentence. It’s a neat way to convey how difficult it is to speak this non-human language, but can be a bit frustrating or finicky sometimes – I died a lot in the second and third chapters because my movement was slightly too quick for less than a second.

There are several secrets to find, with some normally unused rituals and the game taking into account the order in which you perform them. Different actions will lead to different endings, and they’re all a lot of fun to discover. To even unlock chapter 3, you need to find three secrets scattered throughout the previous two episodes. Thanks to some generous bookmarking and a skip feature, you don’t have to repeat too much to see everything, though the reading mechanic did get particularly annoying in some of the more complex ending routes. 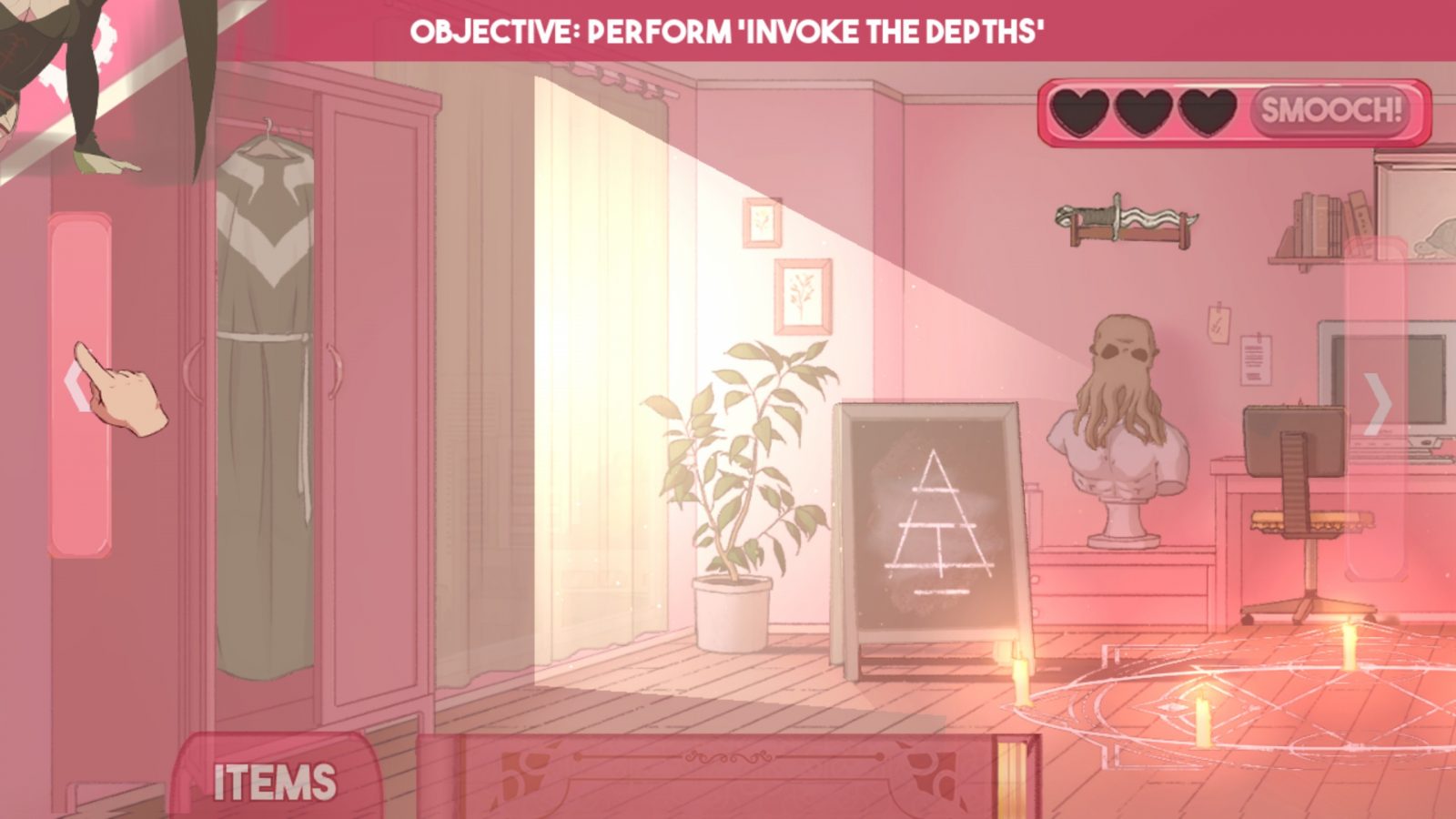 Sucker for Love has a gorgeous, 90s anime aesthetic with some appealing character designs and stylish menus. Even the main character looks pretty cool when you look in the mirror, with looks good enough to tell you just how stupid he is. Each character is supremely well written and each of the girls even being fully voice acted. In particular, my favorite scenes were the rituals for Estir, which is actually a play completely original to the game. Kayli Mills does a wonderfully entertaining job at conveying the character’s arrogance by effortlessly blasting through tongue twisting lines. I do wish the protagonist was voiced, but they do seem to be adhering to the visual novel tradition as a conscious choice. As a side note, you can’t choose the protagonist’s gender, but the next game in the planned trilogy will have a female lead.

Sucker for Love is intensely enjoyable and hilarious, but it is sadly a bit glitchy. I’ve already talked about the biggest issue of reading being finicky, but there are also moments where you can’t click on certain objects, the load checkpoint menu bugging out, or certain voice lines being completely different from the text on screen. The game is still being patched, with the latest releasing on Horny Werewolf day, so hopefully these can be ironed out over time. Aside from that, I mostly just want more from the game. It’s short and oh so sweet, I can’t wait for the sequel.

Sucker for Love: First Date is a gut busting romp through relationships with several eldritch abominations. While this visual novel has a few rough edges, it is a must play for fans of comedy games.

David is the kind of person to wear his heart on his sleeve. He can find positives in anything, like this is a person who loved Star Fox Zero to death. You’ll see him playing all kinds of games: AAAs, Indies, game jam games, games of all genres, and writing about them! Here. On this website. When not writing or playing games, you can find David making music, games, or enjoying a good book. David’s favorite games include NieR: Automata, Mother 3, and Gravity Rush.
Related Articles: Indies, Sucker for Love: First Date
Share
Tweet
Share
Submit