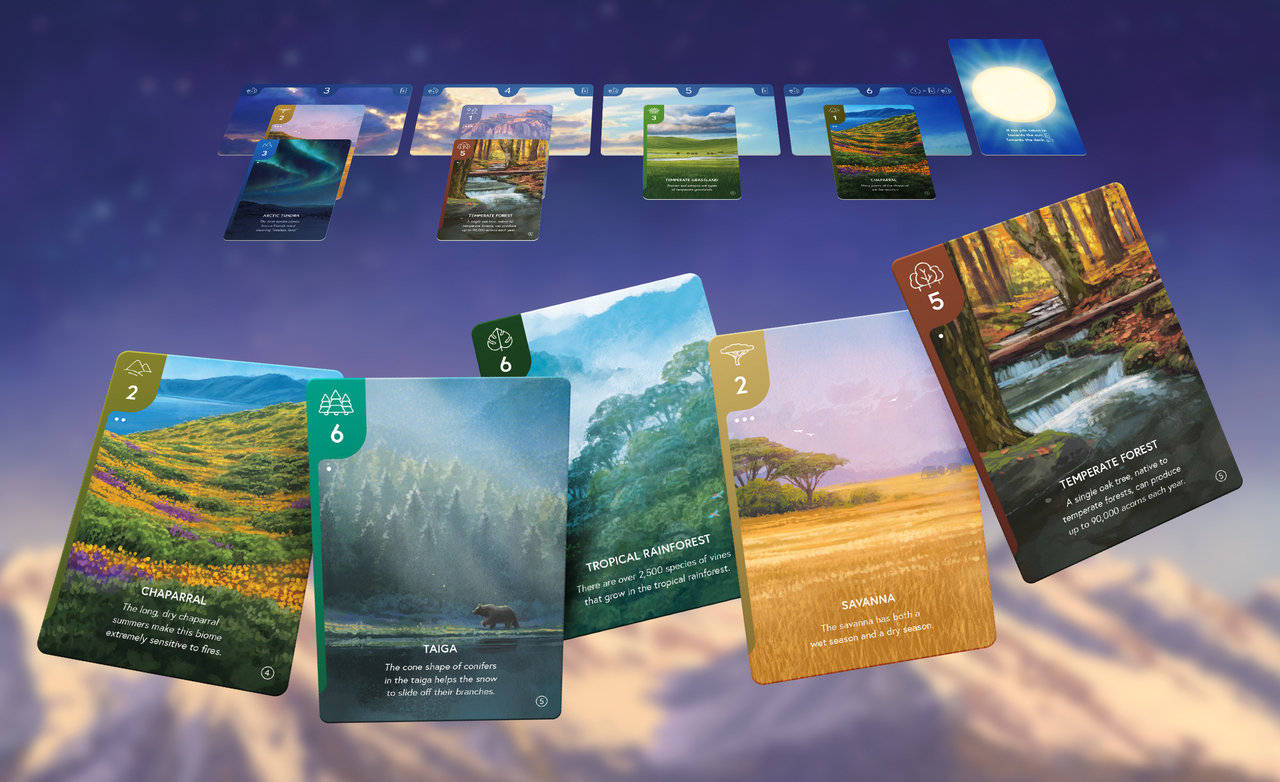 Subastral joins the burgeoning subniche of short, moody environmental games that I am happy to see growing in the boardgame market. This 15-30 minute card game positions you and the other players as traveling researchers seeking to outdo one another in collecting the most information about Earth’s biomes. This plays out over a short game of playing and collecting selections of biome cards, seeking to gather the widest array of information possible. Though the theme and mechanics of Subastral have little to do with one another, the strategy at play makes it a worthwhile, if limited, experience.

However Subastral presents itself, the basis of the game is set collection, and the theme of research has essentially nothing to do with gameplay. This is a far cry from something like Arboretum or Kodama, where the geometry of the cards feeds directly into the environmental themes. Subastral’s decks of cards, representing several Earth biomes, is made up of sets of picturesque landscapes with facts about those environments, so the first few times through you will get a limited education in these areas. 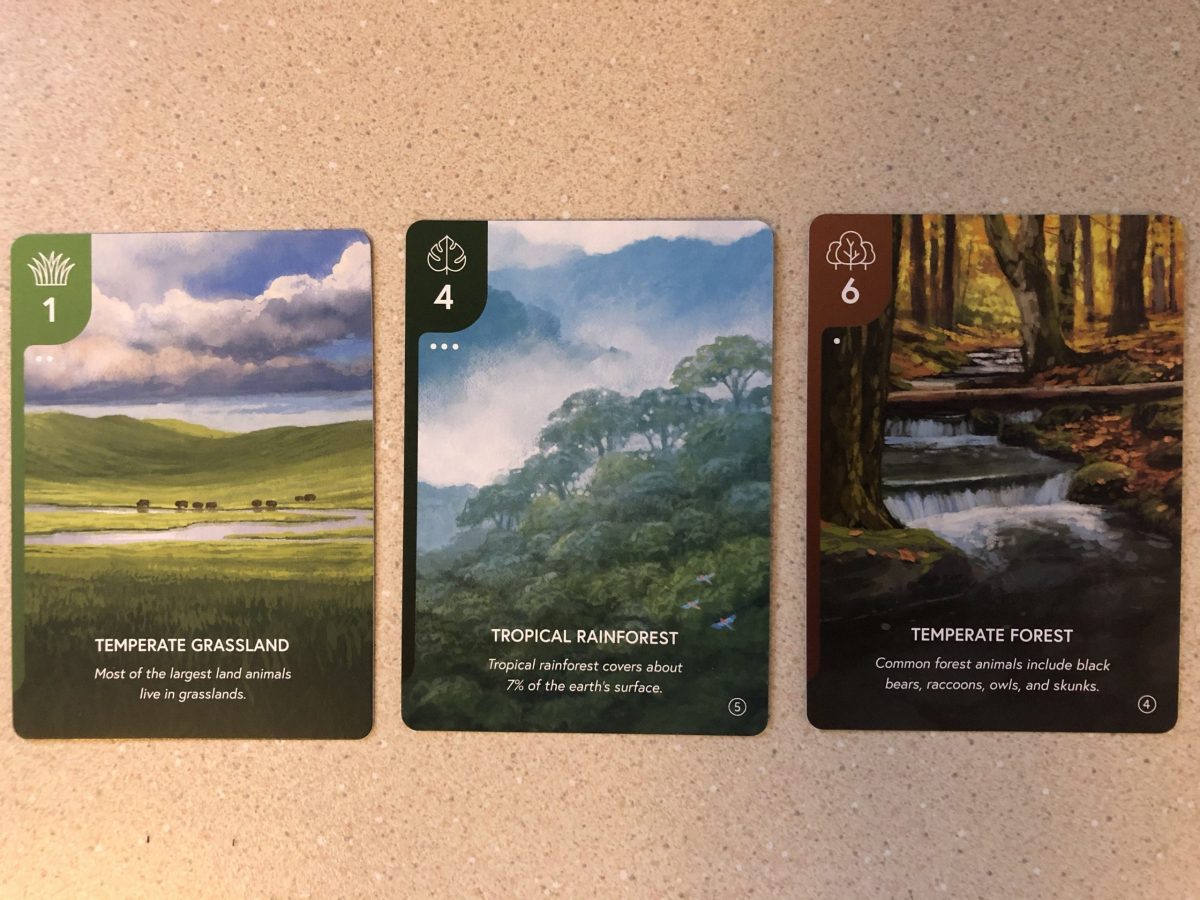 Play starts with the shuffling of the deck, removing cards as necessary to fit the number of players. You will then construct the sky, placing the six cloud cards above the play area, and deal three cards to each player. Next, you shuffle the deck and place a Game End card into it, at a height from the bottom delineated by your player count. After dealing one card to each cloud card, you are ready to begin.

During play you have little you can do on your turn, but many choices to make. Your turn begins when you play a card from your hand onto the cloud card matching its number. If you have no cards, you will draw a card from the top of the deck and end your turn. Once you place a card, you will take all cards from a given cloud card. If those cards are to the left of the card you placed, you will add them to your hand. If they are to the right, you place them in your journal to score later. If you played on the first or last card and then take from the opposite end, you can choose whether to add the cards to your hand or journal. Once a cloud empties, you refill with the top card from the Biome deck. Once the end game card is revealed, you finish the round and score. Scoring rewards both heavy investment in a single biome and an array of biomes in sets.

Usually my rules summaries involve eliding over details or exceptions, but the paragraph above does contain the information necessary to play. What’s missing is the deceptive depth contained in that simplistic offering. You have a lot to manage in terms of your hand, your journal, the cards on the table, and your opponent’s targets. The more a pile of cards grow the more value it can give you, but the more likely it is to be snatched by another player. Learning your limitations and when to take certain cards is crucial to success, and rewards repeated play. Going for mixed sets may net you more points, but doing so is more difficult to pull off successfully, forcing you to balance the risks you take in order to succeed. 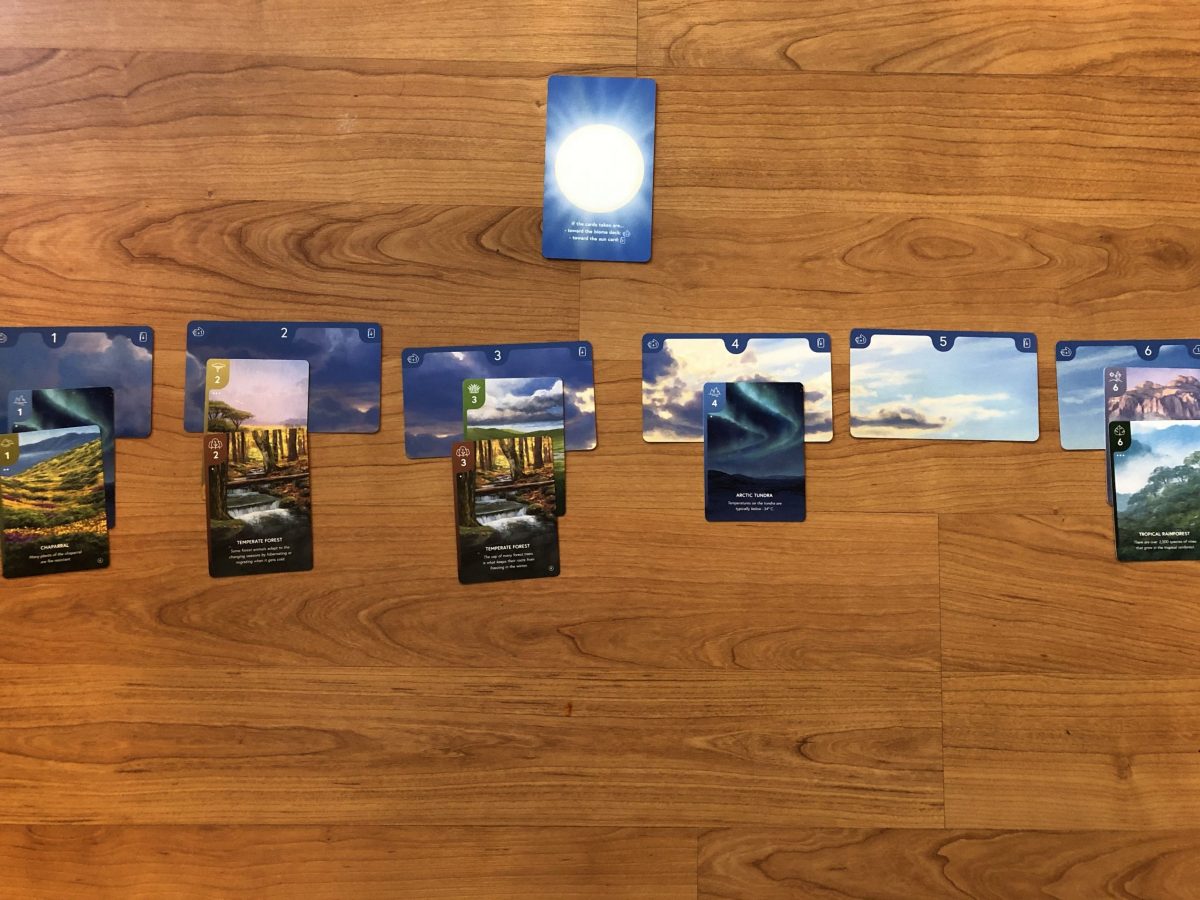 Be prepared for Subastral’s wide, if limited, table presence

Even so, there’s no getting around Subastral’s inherent position as a short game. Under most conditions you won’t play for longer than 20 minutes, and despite its replay value you find yourself tiring of it after a few games in a row. To be fair, the short time is a purposeful design choice, pressuring you to adopt a strategy and stick to it without knowing for sure if you have enough time to pull it off. Limited as it is in strategy and variation, Subastral is more an appetizer than full meal. That said, it’s more than reasonable for the price point, especially for something small enough to carry in a back pocket.

The last minor point of contention I hold with this game is its suggested player counts. With a game that relies to much on other player’s actions for its strategy, your ability to predict varies wildly depending on the number of people you have at the table. With two people and open journals, you can plan things out in advance and try to optimize your positioning carefully. When it gets up to five, however, Subastral devolves into a more chaotic grab for temporary gains, with the ultimate winner a beneficiary of chance nearly as much as decisionmaking.

Subastral is a small game with extremely light theming, but the balance of cards and time limit lead to a game of challenging, if not overly deep, decisions. It’s quick to learn and teach, at a small price point and storage cost, so its limitations are intentional features rather than drawbacks.

John Farrell is a legal aid attorney specializing in domestic violence, living in West Chester Pennsylvania. You can listen to him travel the weird west as Carrie A. Nation in the Joker's Wild podcast at: https://jokerswildpodcast.weebly.com/
Related Articles: Subastral, Tabletop
Share
Tweet
Share
Submit