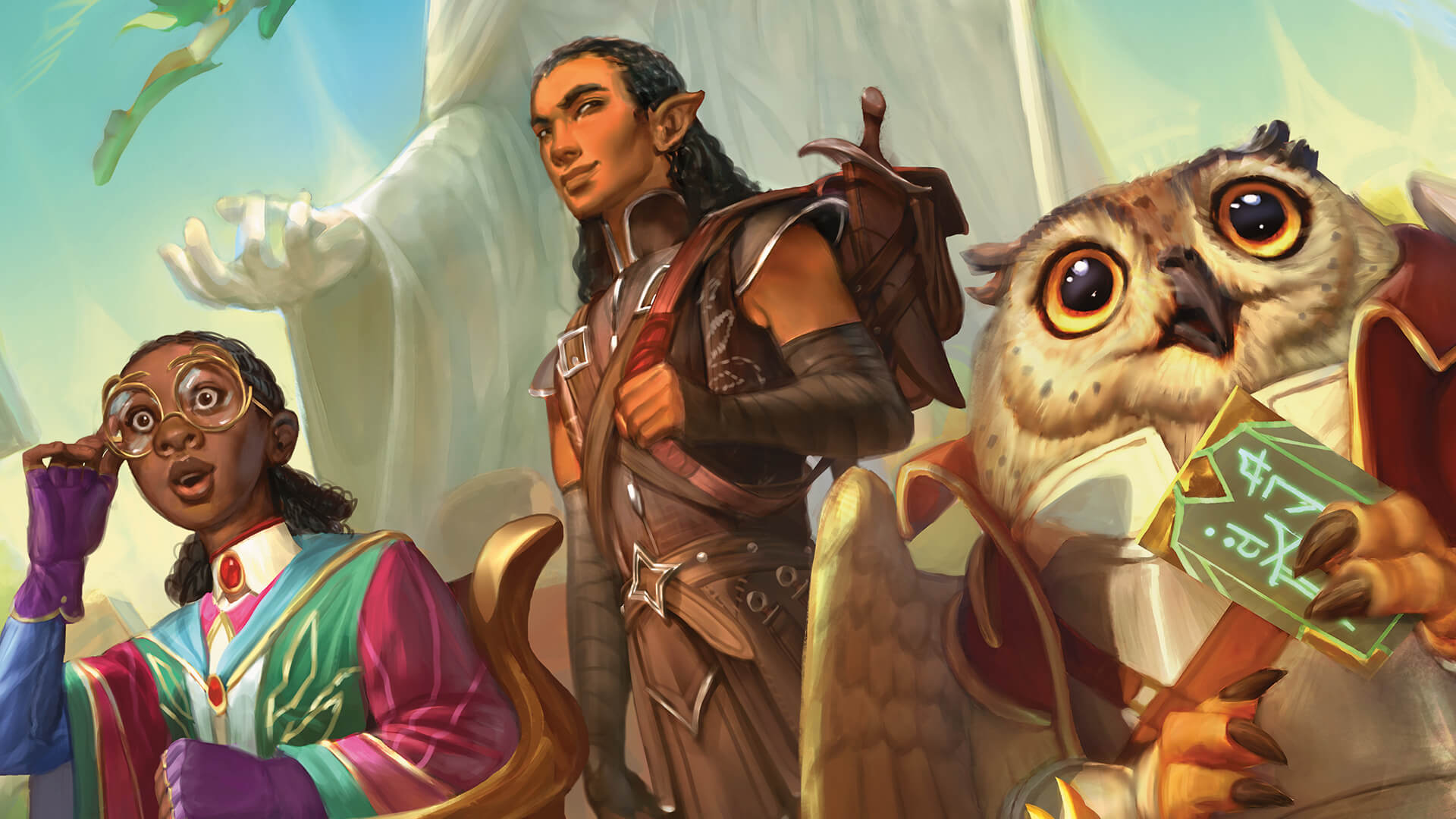 If you ever wanted to play D&D in your own Hogwarts-style academic environment, Strixhaven: a Curriculum of Chaos is going to leave you wanting. Much like the underwhelming and falsely advertised Waterdeep: Dragon Heist, the choice to make this into an adventure first and supplement second immensely limits its usefulness at your table. Its purposes are muddled, with extremely meager character options mixed with similarly anemic DM tools, all to make room for an adventure that will only attract a select group who are interested in its extremely specific brand of academic fantasy. 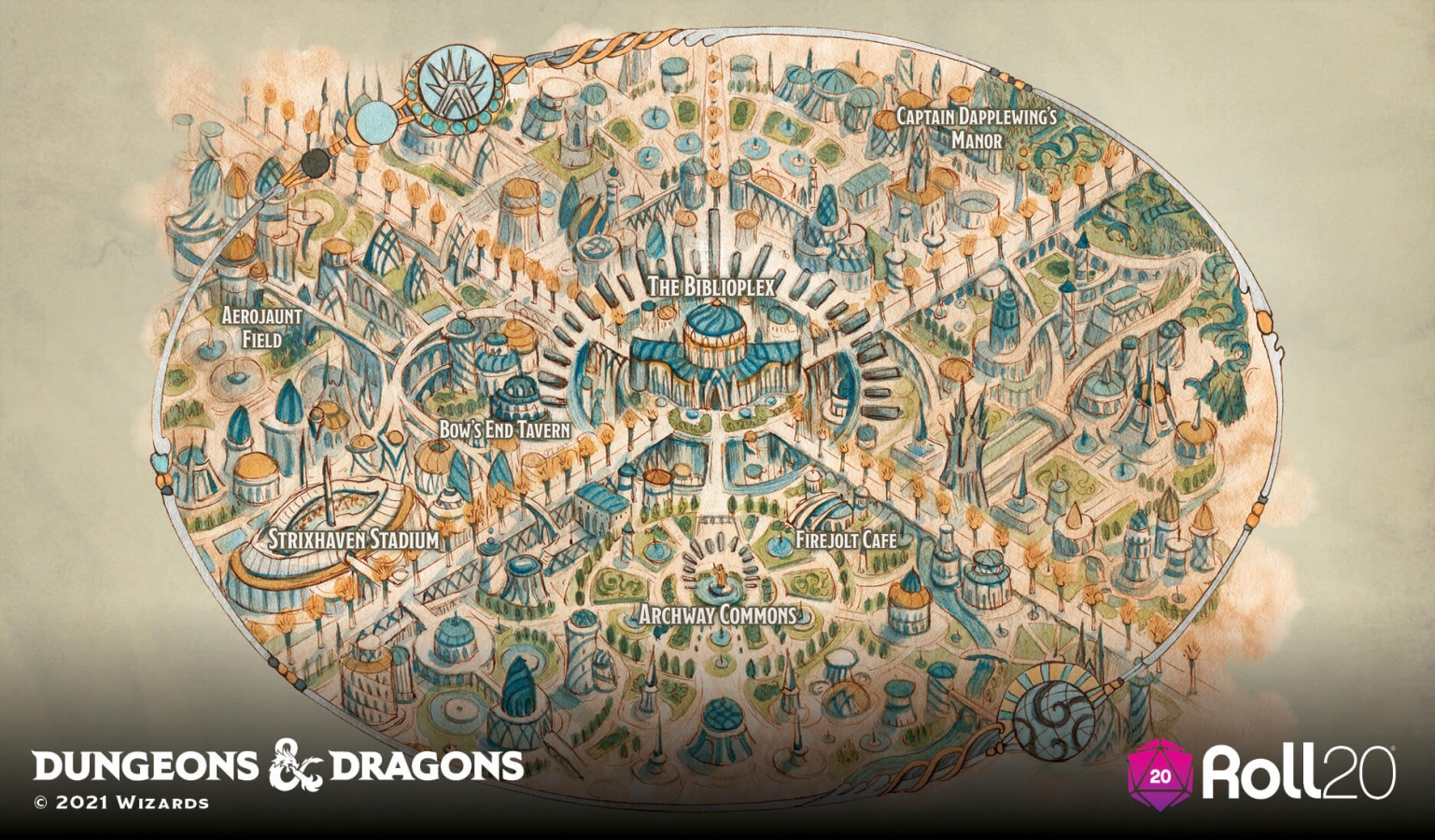 Before getting into the meat of things, it’s important to remember that this review is primarily of the Roll20 implementation of Strixhaven as distinct from the adventure module itself. In some ways this does the module favors, easily giving you the ability to drop its maps, items, and monsters into other games. In other ways this transition is not so charitable, because you’ll still have to be dealing with Roll20. That is to say an occasionally uncomfortable interface and the inability to run this software on Chrome (unless it feels like changing its mind inexplicably). Some of the maps which may have looked great in the book do not translate as well when expanded and made into a Roll20 map. Additionally, eighteen of the twenty maps are in black and white rather than color.

The content for characters in Strixhaven is laughably minimal. If you are a player as opposed to DM, don’t bother with this. It contains a single new race, the Owlin, five new spells, five new feats, and five backgrounds. Each spell, feat, and background tie into the setting’s five magical colleges, granting you minor magical bonuses depending on which house your character belongs to. The book’s greatest claim to fame is its over 40 magical items, which hardly justify obtaining this module on their own. Frankly, for a book literally based around a school for mages, five spells is a slap in the face and I don’t think you should stand for this. 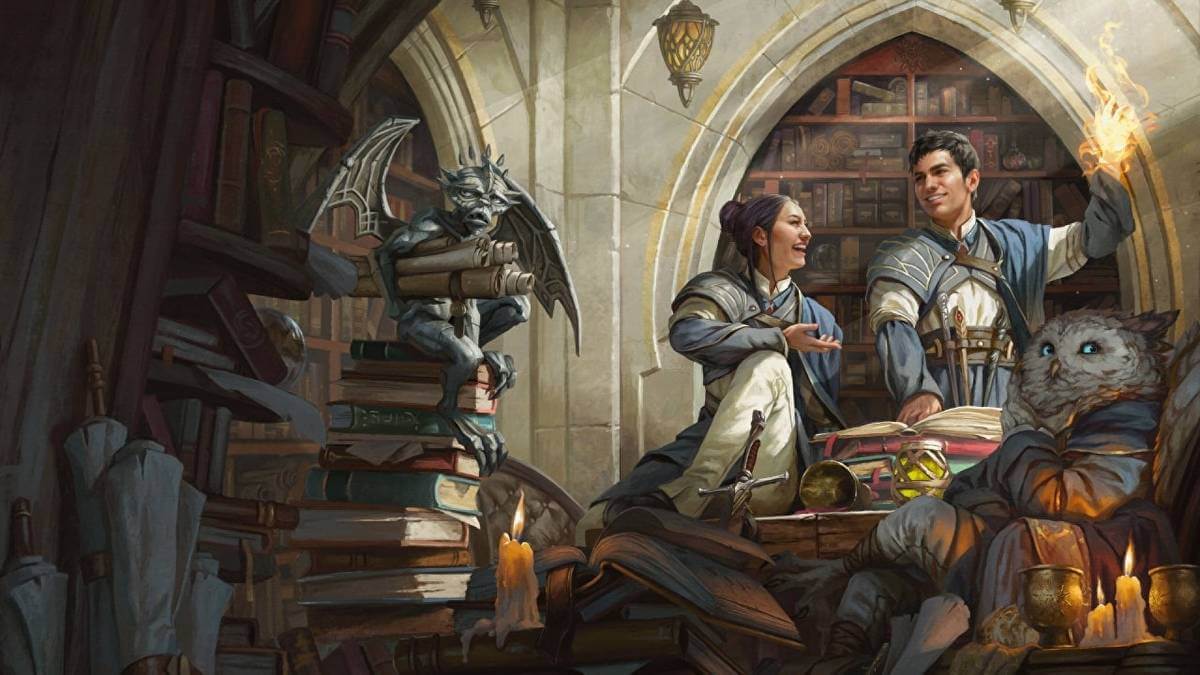 I’m of the opinion that making this an adventure book at all was a massive mistake. Instead of giving you a toolkit to make your own magical school and filling the book with options for doing so and new character choices, the vast majority of the content is tied to a setting that’s so generic that we have no reason to pay attention to it. This is a Magic: the Gathering setting after all, that wears its Harry Potter influences on its sleeves. In a way, this is built to be as generic and recognizable as possible, to rely on the already familiar tropes that Rowling popularized. To that end, any DM on the planet can already improvise a magical school setting on the spot. Its only point is to be a knockoff of an existing setting, so what do the specifics matter, exactly? If it were to support the adventure itself, I agan find myself less than impressed.

The adventure itself takes you from levels one to ten, and lacks some of the structure that would make me excited to recommend it. The first half or so of the book is a series of disconnected adventures and social events to get you into the setting, and make the most use of its relationship mechanics. These rules grant you points with an NPC the closer they grow to your PC, and grant special bonuses upon getting close enough to them. I hate this. I hate gamifying something that players and DMs can already handle effortlessly through roleplay. I hate turning something organic and fun like getting to know someone your players find engaging into a mercenary hunt for points and bonuses. I hate most that the adventure is structured so that the social events and relationships are so core to the experience. Strixhaven is an adventure that doesn’t provide its players with much in the way of choice or ability to affect the narrative. It’s only half way through that it gets anything in the way of a primary villain or direction. Sure, there are rules for extra curriculars like magical sports minigames, but think of how much better the book would have been served by full chapters on these side-objectives rather than some minor sidebars in the midst of the main adventure module. The book has other subsystems to emulate the feeling of academia, like Student Dice gained by passing exams that can grant you bonuses later on. 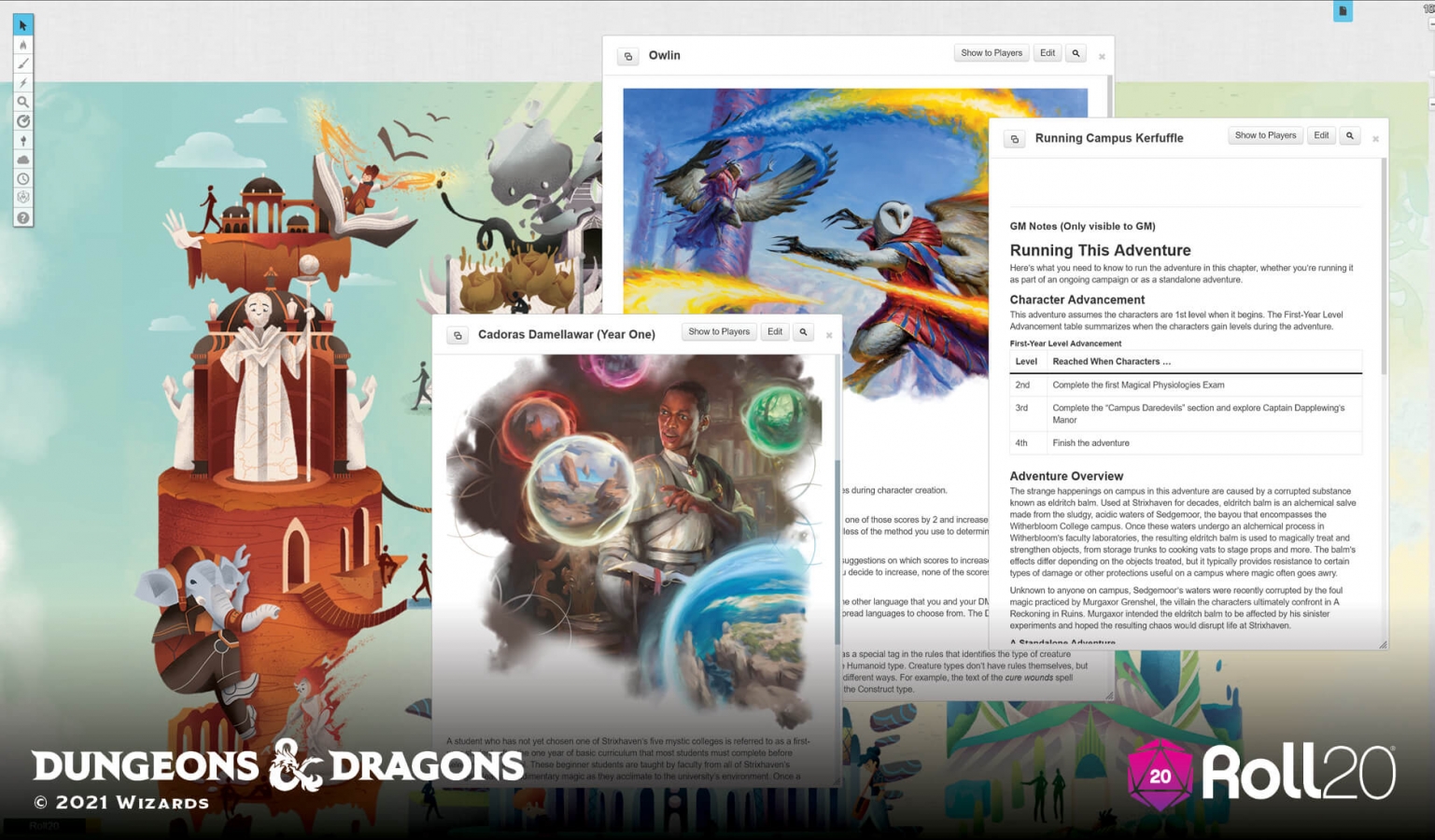 Instead of being a useful set of tools and options for a wide variety of players, Strixhaven is attractive only to the extremely selective group that want this set of (passable) adventures delivered in this specific school in this specific way. The lore of its dragon administrators, the maps to give you your bearings, and the rules additions that make it all feel like a school have some merit, but they are drowned out by the presence of material that most people have no use for.

Until the end of December, this module is $30, but it will jump to $50 in the new year. If you think five backgrounds and some magic items are worth that, I sincerely hope you enjoy the adventure contained herein. Otherwise you would be better served with some homebrew.

Strixhaven: A Curriculum of Chaos

Strixhaven presents a set of adventures in a magical school and not much else, sure to leave both DMs and players wanting with its limited options. Some of the rules for extracurriculars are charming, and help round out the theme of the module. Unfortunately the adventure itself, which takes up the main core of this content, is not something I think most will find useful or memorable.

John Farrell is a legal aid attorney specializing in domestic violence, living in West Chester Pennsylvania. You can listen to him travel the weird west as Carrie A. Nation in the Joker's Wild podcast at: https://jokerswildpodcast.weebly.com/
Related Articles: Strixhaven: A Curriculum of Chaos
Share
Tweet
Share
Submit