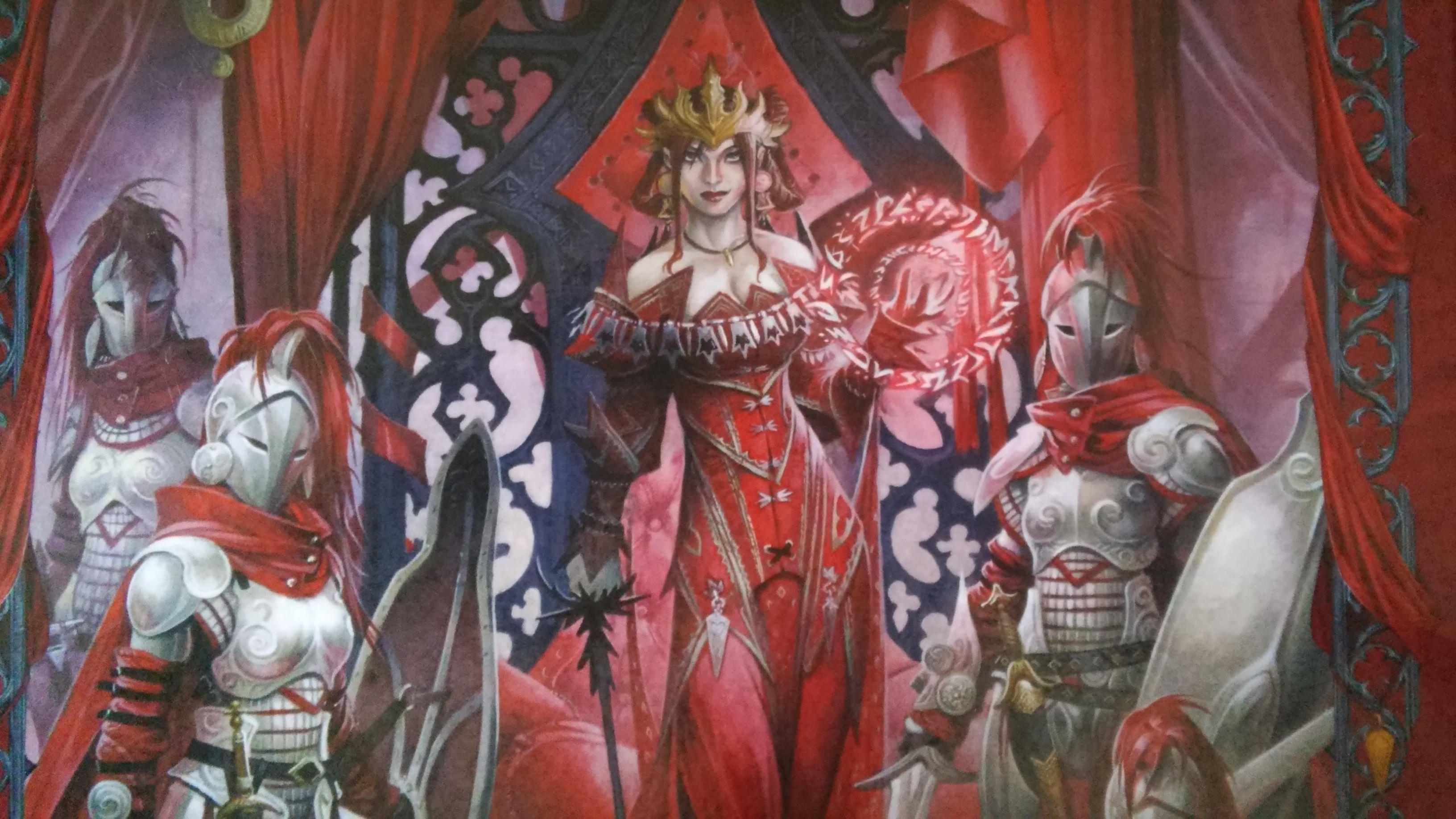 Korvosa, a great city seated at the edge of the Varisian wilds, is in turmoil. A curse hangs over the rulers, dooming each who ascend the throne to an early death. Once again it has struck, and Korvosa is thrown into turmoil as the fate of Varisia hangs in the balance. You heroes are but players in a grand game, and the only reward for winning is survival.

Curse of the Crimson Throne is a massive adventure, taking your Pathfinder players from level 1 to 16 and lasting anywhere from 16 to 22 four hour sessions, depending on how much time they spend exploring the various sidequests and factions of Korvosa. Originally a 3.5 adventure path, Paio has adapted the full campaign for Pathfinder and combined it into a single book. The generous tome, clocking in at a full 478 pages, has been retooled with advice from game masters to be easier to run. Its extensive appendices, also new additions, include detailed backgrounds on NPCs, magical equipment, locations, and rules on how to incorporate the Korvosian tarot into your experience.

The adventure begins as a ground level crime adventure, but eventually unfolds into a grand magical conspiracy. Players will get to know the city as they explore it, encountering the many people who are also caught up the nobles’ struggle for dominance. The political and physical landscape are both laid out extensively, with clear maps for locations and long writeups for NPCs provided to flesh them out.

Characters will often have small portraits in line with their introductions and full body ones when they are described in the appendix.

Encounters in Curse of the Crimson Throne are varied, containing a satisfying mixture of combat, investigation, and roleplay challenges. Your players, as without noble titles themselves, are the real underdogs in this fight, and it’s only through tenacity and risk that they can hope to make a real change.

There are multiple optional side quests peppered throughout Curse, which help the city feel more organic and give you more tools at your disposal upon completion. You can feel yourself peeling back the layers of a larger setting as you learn the struggles and motives of everyone who lives there. There is even a brand new dungeon added into this release which gives more insight on the Grey Maidens, guardians of Korvosa’s Queen. Further adding to the depth of Korvosa is greatly aided by the opportunity to see the impact the destabilization has on the entire populace. .

That depth is hampered somewhat by the fact that certain NPCs have to survive to the end or the adventure falls apart. This might not be an issue, but as any GM knows, no plan survives first contact with the players. The book gives some advice on how to circumvent this issue should those characters get threatened, but it all seems fairly heavy handed and the type of things players would see through transparently. I understand that this is the nature of pre-published adventures, but it sticks out in a few places where I am sure your only solution would feel like a deus ex machina. The overall adventure can also be inflexible, but only at times. Overall, you get the distinct feeling that you are someone who matters to the city.

The overall tone is dark, as Korvosa devolves into disease and violence, but mixed with the kind of wacky adventure that Paizo does excellently. The crime boss in the first mission has a pet shark that your players will have to fight, and it’s awesome. These tones do conflict at times, and the abject fun gets undercut by the severe violence at play. I have to caution that this is definitely a mature experience, if for the art of certain characters alone. Whether that is a benefit or drawback depends more on personal preference, but it does work well as the adventure develops, getting gradually more serious as the mystery develops.

While this was a great encounter, I was thinking that a mutated decaying blob of flesh might not be everyone’s cup of tea

The look of Curse is wonderful, drowning you in blood reds and character portraits that do nothing to obfuscate the adventure’s text, which comes in clean blocks. The art is unfortunately sparse, however. You get portraits of every major NPC and fantastic action shots of certain story moments, and really not much else. Each piece has Paizo’s characteristic comic feel, which aid the action theme, and I wish there were more of them because of how well characterized they all are.

The dungeons are well crafted and complex environments, but each number reference there has around a paragraph of text, sometimes more if there is a special encounter

While the adventure is well written and structured, it is not presented to the GM with the same quality. Each chapter begins with a quick few bullet points of major events, but but lacks real summary of the overall campaign or individual aventures. The detailed political landscape and substance of the game is translated through massive blocks of text. Game preparation consists of reading page upon page of text and making your own detailed notes just to summarize before you do anything else. Most pages are broken up with some kind of art or map, but it does little to help the overall experience. Dungeons can also be a pain, where you will have to flip several pages ahead to find what a number on the overall map is supposed to signal.

The magic items on offer are memorable and useful, if a bit too plentiful. You may have to dial back their distribution or face a deeply powerful group of players by the game’s midpoint. Other than that, specialized equipment is limited, but it would have been excessive to create an all new set of blades and armor specific to Korvosa itself.

As you travel through the city, you will meet people whose plight will pull at your heartstrings or whose evil will spur you to vengeance. The characters and villains are as worthy of exploration as the city itself, and you will have a great time doing so.

Pathfinder: Curse of the Crimson Throne

Curse of the Crimson Throne is updated, fixed, and fully loaded for a long term dive into the political turmoil of the city of Korvosa. While it would take some deft hands to run properly, the adventure is a wonderful achievement of fantasy adventure that is well worth the exploration.

John Farrell is a legal aid attorney specializing in domestic violence, living in West Chester Pennsylvania. You can listen to him travel the weird west as Carrie A. Nation in the Joker's Wild podcast at: https://jokerswildpodcast.weebly.com/
Related Articles: Pathfinder: Curse of the Crimson Throne, Tabletop
Share
Tweet
Share
Submit