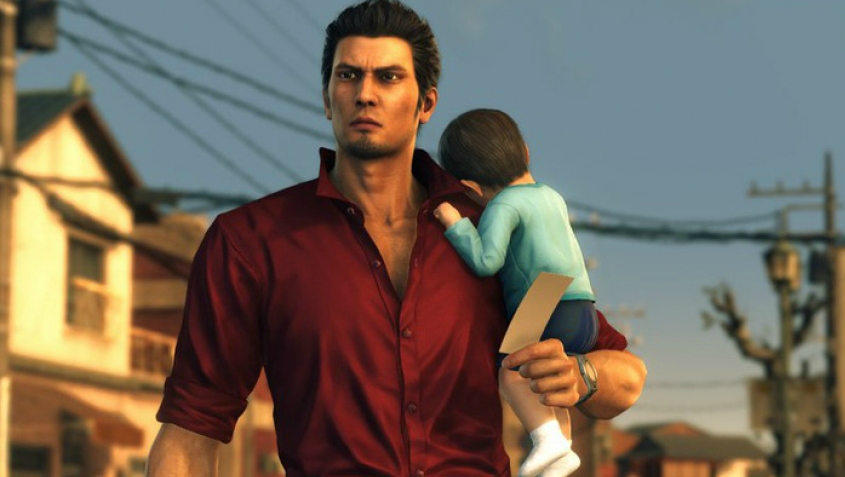 The streets are crowded. That isn’t unexpected. It is metropolitan Japan after all, bustling with commerce, social life, and thousands of lights beckoning your attention. The streets are also teeming with danger, in the form of gangs, thugs, drunkards, and other angry, disillusioned men looking to fight. The wise know, and the others will learn that there is no larger danger in the streets than Kazuma Kiryu.

Kiryu is strong, fast, quick thinking and, beyond all, benevolent amongst the most low down and ruthless. Yakuza 6: The Song of Life is the continuation of the long story of Kazuma Kiryu, with a focus on family and fighting. Kiryu is an excellent fighter, and I had a lot of fun taking on that role, but is less of an accomplished patriarch, despite the best intentions. That side of the game is intensely compelling, with a drama that unfolds in surprising and captivating ways.

Kiryu’s character is captivating despite the fact that this is the first in the Yakuza series that I have ever played. The game offers a look back at the games previous, but frankly that is not even necessary. The story is enhanced by past knowledge but stands full on its own merit and relies on forward events, not past. There are not many dramas in video games that reach beyond eye roll level writing and presentation, but Yakuza 6 manages to convey its tale at the highest levels of quality.

In Yakuza 6, Kazuma Kiryu is hospitalized from previous events, and ends up arrested and eventually sentenced to a short prison stint. Kiryu more or less allows this to happen so that Haruka, a girl long in his guardianship, and the orphaned children that he cares for, may try to live a life unblemished by his past. Despite his best wishes, this does not come true. Haruka decides she must make the same sacrifice for the children of
Kiryu’s orphanage, and flees to make a life on her own.

When Kiryu is released, he finds that Haruka has fled and goes into the city to locate her. He finds an underworld devolving more into violence, streets filled with thugs and gangsters, and answers that fail to reveal even the most simple of truths. After he discovers the tragic state of Haruka, clinging to life, and a baby that is undoubtedly hers, Kiryu takes to a new, seemingly quiet town looking for the father.

The game is story-driven, with long cinematics and largely dramatic gameplay as well. Walking the streets is immersive, feels alive and looks great. The fights are long, tough affairs that have several triggers for cinematic moments. Kiryu interacts with the world around him, the walls and doors and people, and this makes for realistic movements at times but other times it makes it look like you just can’t walk straight without bumping into every single thing around you.

The fights are reminiscent of a classic fighting game, but with a few extra elements and the freedom of a city-wide arena. There is a standard, power, and hold attack, and a dodge as well. You typically will fight many enemies at once, and the items on the street around you are destructible and also usable for attacking with. Beating up bad guys fills a heat meter, which can trigger special attacks that will do heavy damage. Certain boss battles have cinematics that the boss triggers, and you also are able to trigger cinematic attacks using the heat mode. In these, you’ll hit button triggers as they flash on the screen, though it is far simplified from typical uses of this style. You’ll fight thugs and gang members on the streets as well, but these are usually very easy and quick.

When you are not fighting, you’ll have the go ahead to enjoy many other elements of the city. Restaurants dot the landscape and each has its own unique menu to enjoy. Certain combinations may even unlock special bonuses. If you’re thirsty but not hungry, use one of the dozens of vending machines scattered everywhere. The drinks inside provide special boosts for a short period of time, or across a small number of battles.

Full bellied and hydrated, Kiryu can take part in a number of mini games throughout the game. Club Sega locations provide many full Sega game experiences, such as Virtua Fighter 5, Puyo Puyo, Outrun, and others. Virtua Fighter and Puyo Puyo both can also be played in 2-player mode from the main menu. You can also take part in darts games as well as a baseball game, and each are beefy mini-games that could almost stand alone.

These elements make the city come alive, in addition to the traffic and pedestrians moving all around. Despite being limited to just a few city blocks, the depth of exploration is still high and I feel much more immersed in the world than I typically do with games with urban settings. There is very little repetition and this keeps the scenery fresh.

There are some hilarious elements of the game that are not so intended. One is a section of the game, early on, where you are toting a baby around town. The baby is hungry and every few moments you are forced into an asinine mini-game where you have soothe it by rocking it and playing upsy-daisy. You accomplish this by using the motion controls in the controller, but the correct choice appears to be fully random, which builds frustration. Eventually you’ll get to shaking the controller violently, forgetting that for intent and purpose the controller is an adorable baby human.

The game is beautiful to boot, with high amounts of detail paid to the streets, buildings, vendors, and each and every character model. The NPCs are a little more static than I’d like, but they all have varied looks and feel like real passers-by. The lighting and weather elements are top notch, and the cutscenes are of movie quality. There are moments, in the minor cutscenes, where the characters will freeze their bodies and move their heads, and it looks awful strange when contrasted with the more detailed full cutscenes.

The sounds of the city are also incredibly well done, with chatter and city noise filling the air. Going into a convenience store shifts the noise to that of musak playing in the background, and the shuffling of feet on linoleum. Each zone, building, or section of the town is audibly appropriate and the shifts between are natural.

Yakuza 6: The Song of Life

Yakuza 6: The Song of Life is a beautiful game, plays smooth, and has a story that is genuinely compelling and driven by top notch dialogue and dynamic characters. The fighting is complex but easy to learn, and the game provides tons of great content in the form of mini-games, town exploration, and side storylines. There is lots to look at and take in as you play, and the game packs a lot of good into a nearly flawless package.

Patrick Rost has been with Gaming Trend since 2013. At first focused on sports coverage, Patrick has gone on to cover a wide range of games and other products for the website. Outside of Gaming Trend, Patrick writes and records music, grinds perpetually in Elder Scrolls Online (PS4), and lives day to day with his two dogs, Bob and Stella.
Related Articles: Yakuza 6: The Song of Life
Share
Tweet
Share
Submit