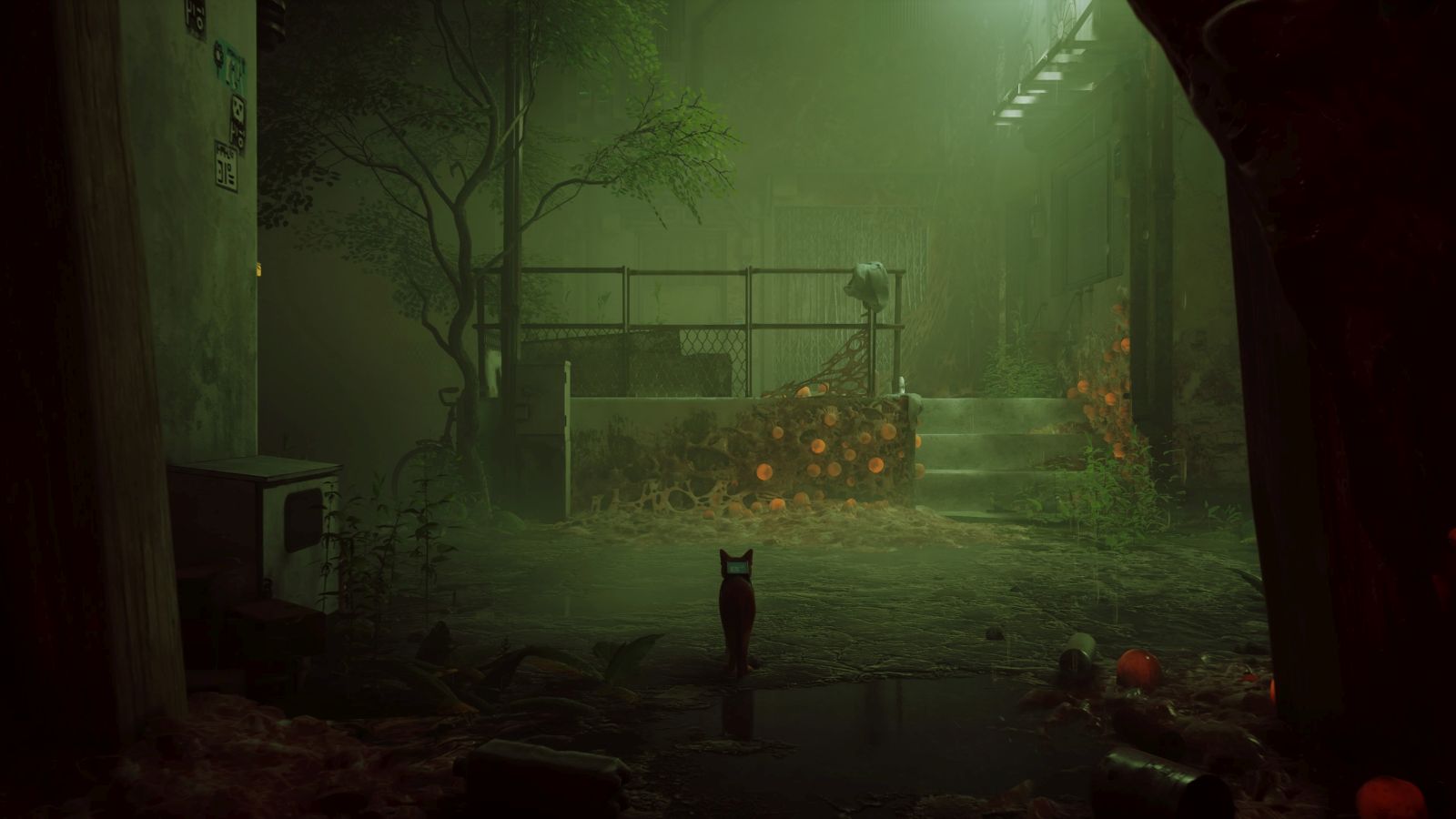 I am very much a cat person. My parents didn’t allow us to have a kitten until my siblings and I were older , but I always enjoyed playing with and cuddling cats when I could. My wife and I now have our little boy cat, Obi-Wan, and we love him to death. So, it makes sense that I was the person who begged to review Stray. After finally playing it, I believe that this unique indie game is one of the best to release this year. 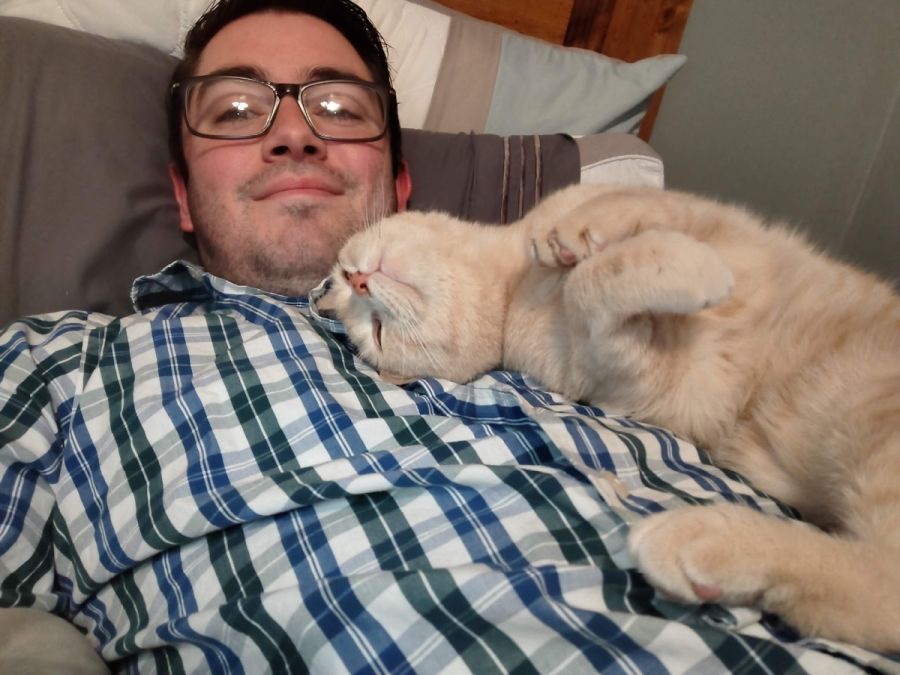 You play as an unnamed feline who awakens after a rain shower in a world you really don’t get much of a look at. Traversing the opening area, you reach a cutscene that will cut at your heartstrings; your furry friend jumps to a pipe which dislodges, sending you tumbling into the abyss below. It was really tough for me to watch, and it hurts even more as you watch the poor thing hobble for a moment post-tumble.

Upon moving through some underground ruins, you’ll encounter one really odd enemy, a blob-like creature that tries to kill your kitty. Then you’ll find something strange that needs your help: it’s a poor soul trapped in the internet. This character, B-12, becomes a compelling companion during your adventure, a tiny flying robot who does his best to serve you in translating the other robots, collecting items for you, and guiding you around. B-12’s backstory is also a fantastic part of the main narrative, and many of those moments connect you even more to this character. 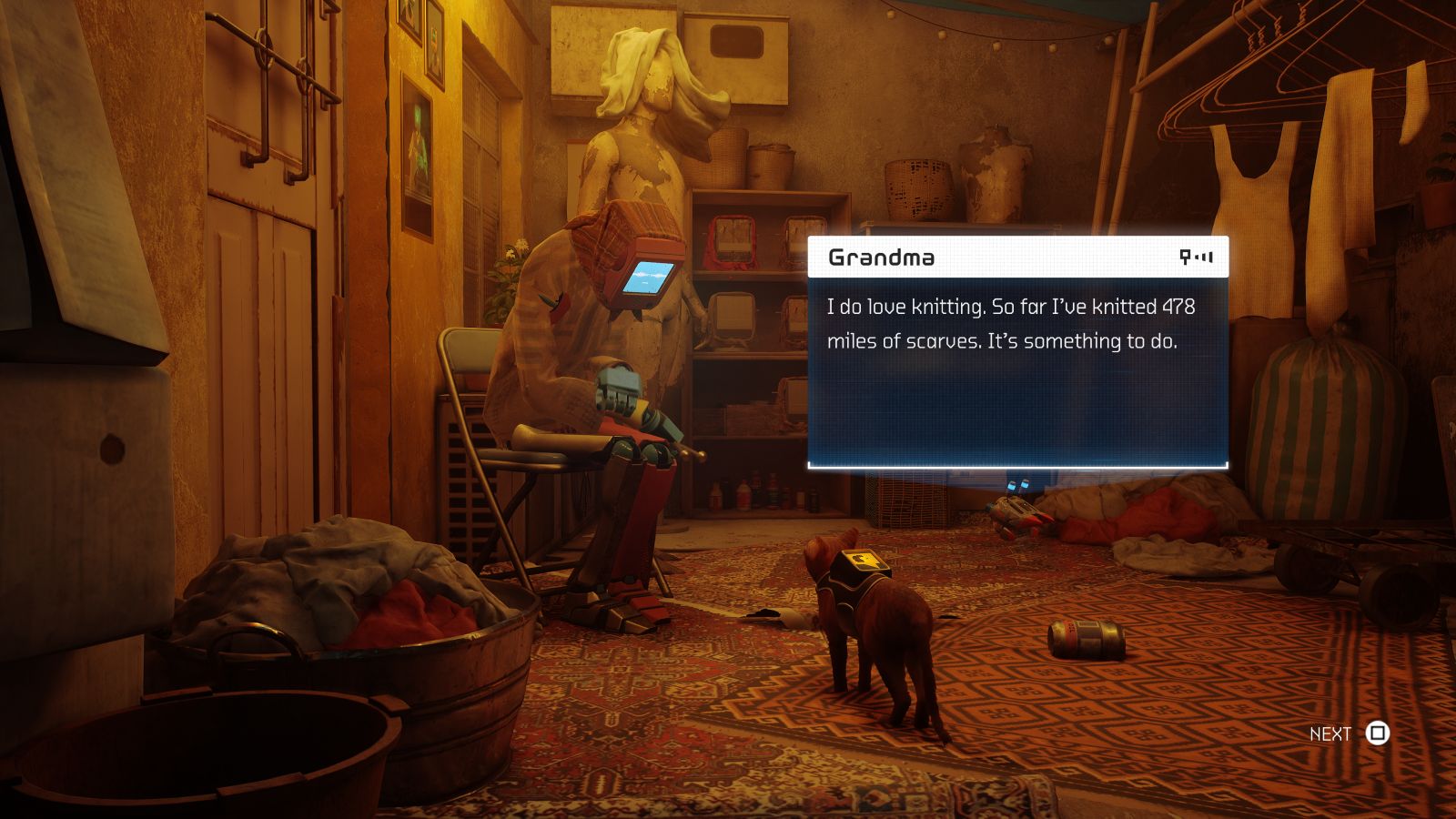 After saving B-12, you’ll need to explore this world, and more importantly find a way back up to home. As you make your way through this quirky yet gloomy setting, the story is gripping, with just enough information to keep you searching for more, but not overplaying its hand and overcomplicating the narrative. I’d say I would have liked more by the end credits, but I also like the simple approach BlueTwelve Studio took. You don’t expect it to be as endearing, and you certainly would expect it to be more about the cat, but you find yourself more a visitor, an observer, learning why and how this world came to be, and the more you find out about the story the more you fall in love with it.

Playing as a cat is what makes Stray so appealing, because you perfectly mimic the mannerisms of a cat. You’ll climb nearly everything, rub up against legs, knock things off tabletops, hop in boxes… there’s even a dedicated button for meowing, and the list goes on. This is the perfect game when it comes to acting like a cat. One of my favorite moments is when you find a napping spot (such a cat thing), and you just lay down. The beauty of it lies in the Dualsense controller however, with the sounds of the cat’s purr emanating from it along with the wonderful haptic rumble. My cat has a loud purr, and it’s a near one for one recreation of it, which heightened the experience even more. Most of the puzzles you’ll encounter have a “cat angle” on how to solve them, like knocking boxes off a shelf until you find the right item, and that’s what makes it fun.

Most of Stray is linear and simplistic: Follow B-12, do this, do that, knock a thing over, rub against something, but I was surprised when I found several hub areas that enable small side quests. There will be a few story pointers, and you can show items you’re carrying to the robots you meet in order to figure things out, but largely BlueTwelve expects you to solve puzzles and move forward in the story. Most of what you will be doing on your journey is finding your way around or up obstacles, pulling levers, and collecting specific items to progress. There’s not much new here, and if you’re pretty good with puzzles you won’t have any issues with them at all; none of them felt beyond my grasp yet satisfying to solve. 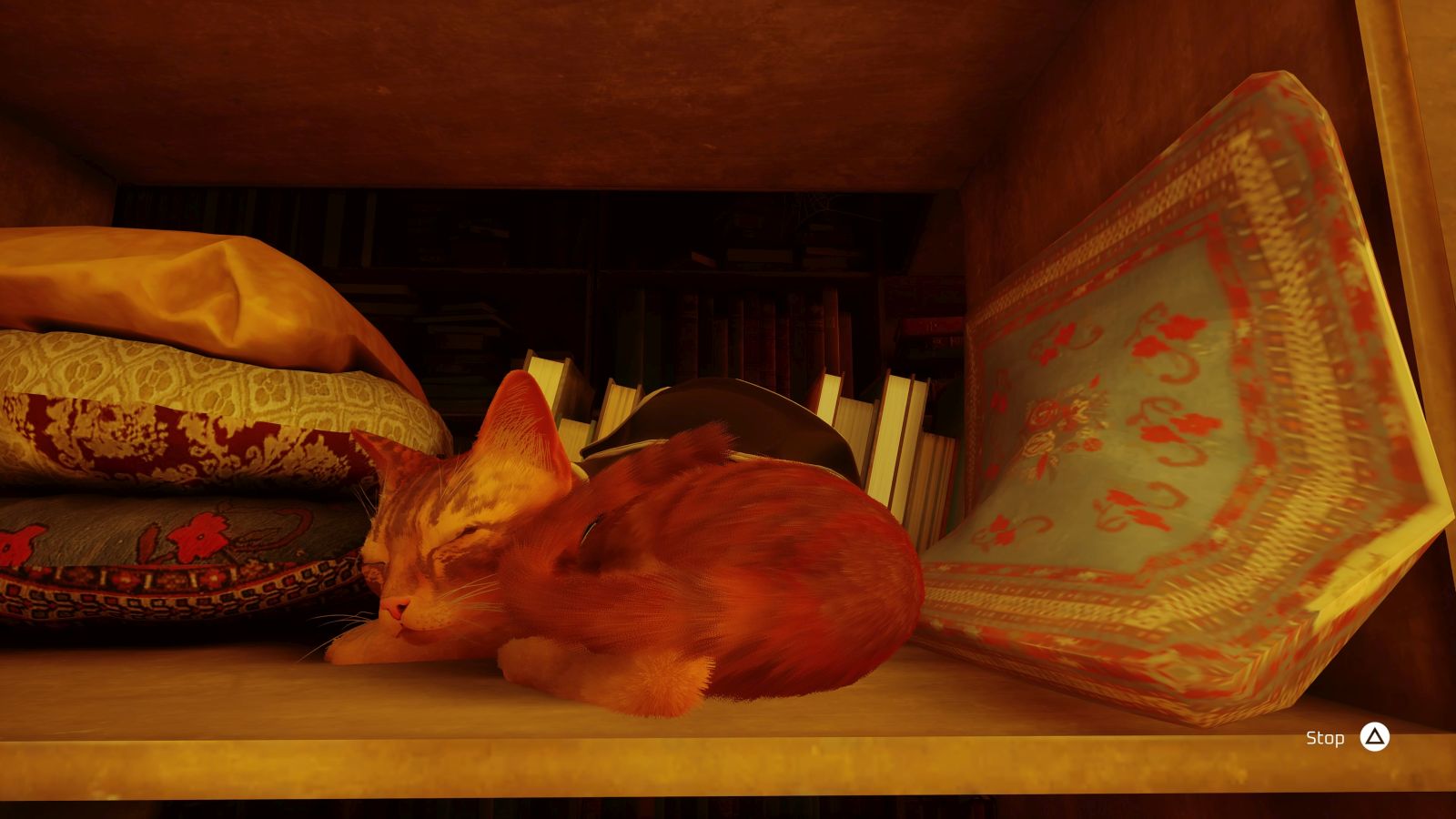 Another thing that Stray nails is exploration. That’s two-fold: the traversal, and the setting. You’ll be doing a lot of jumping from place to place, and verticality, along with the perspective of a cat, really makes a space feel like a sprawling vista. Leaping through windows or maneuvering through narrow areas or holes in chain link, I can’t say enough about how well a job BlueTwelve has done making the space feel so much fun to be in. Most of the puzzles wouldn’t be nearly complex enough for my interest if not for my needing a cat’s butt to sit on a lever to help another character get through a door, but that’s why it works. Maybe it’s just me being a cat person, but I genuinely feel like this would have been a generic adventure title if not for making us play as a cat as the hook.

As you explore the world, the only way to move forward, either through side quests or the main story, involves chatting with the robots of the world and using items you’ve collected in the open world areas. Not all of them are going to be distinctive, in fact, many will just repeat the same line when you show them an item you haven’t found a use for in an attempt to determine its use, but that doesn’t work against Stray. Dialogue for each of them is largely miniscule, but the special automatons you find make the search completely worth it. Take the musician bot for instance, who’s looking for sheet music so it can play a tune. I won’t tell you too much about these encounters, but don’t rush through the main narrative, and instead stop to smell the catnip. 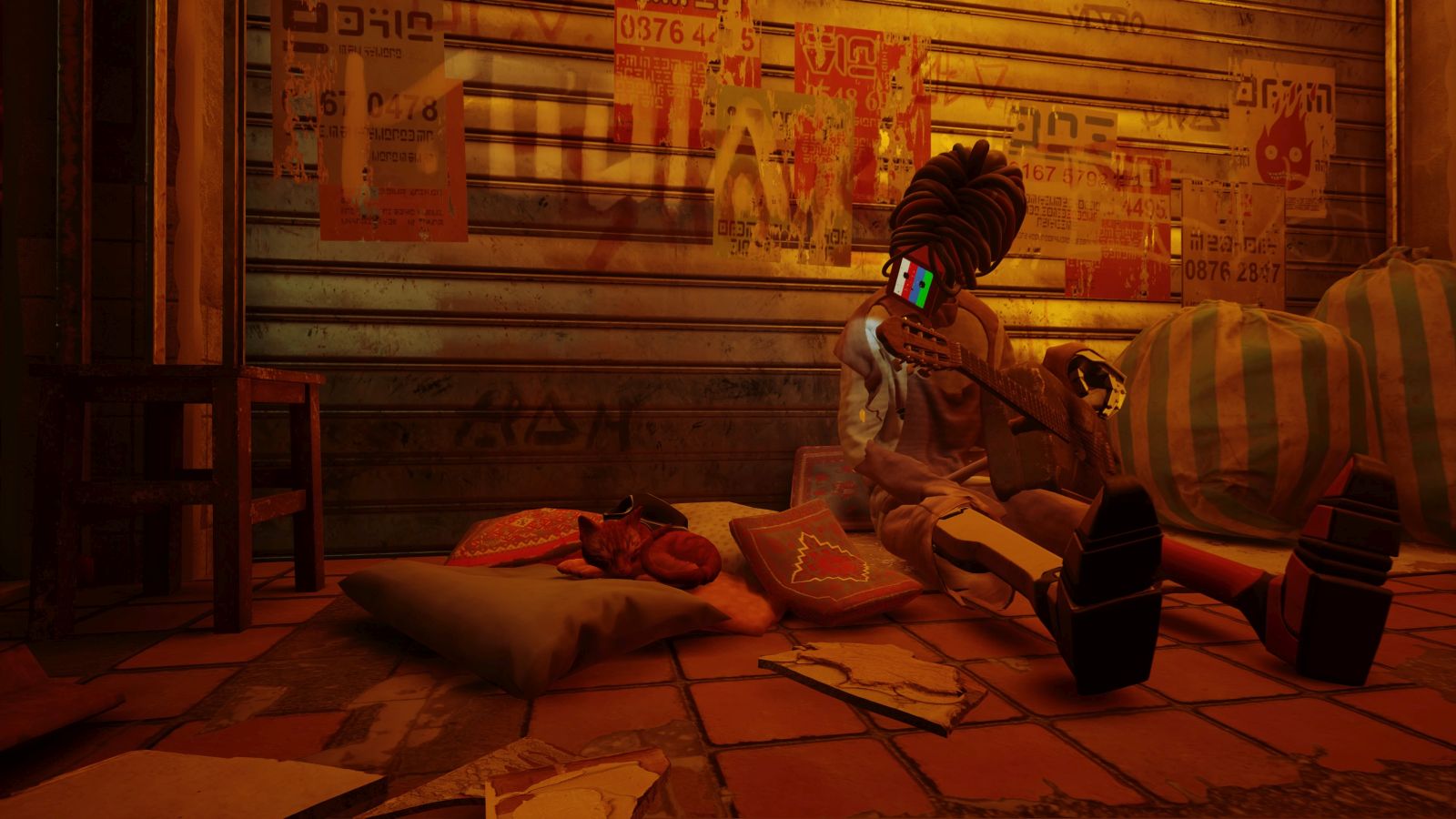 The setting ties in with this murky, dreary cyberpunk world that helps immerse you in the experience. It’s a classic post-apocalyptic location in neon, but comes across as warm and cuddly, yet cold and terrifying. For example, exploring the initial area and chatting up all the mostly friendly robots is a pleasure, while running away from a pack of zurks is frightening, and graduates to horrifying the first time you die (which is hard for me to take). It’s captivating because it’s alive in both the best and worst possible ways.

Stray also adds combat in the middle of the game, when you find out extreme light destroys the zurks. It’s something you use sparingly, as there’s not much of a charge available for it, but Stray abandons combat surprisingly quickly, which keeps the focus on what matters, the narrative and exploration. I think this was a great move on BlueTwelve’s part. This isn’t a combat driven game, and what is there functions as a plot device to advance the story.

Speaking of advancing through the story, I found Stray to be short. Given some restrictions I have dealt with during review, I ended up quickly pushing through the second half of the game. Given the circumstances I timed my playthrough at five and a half hours. There’s still a ton of value left on the table if you fly through it, including some fun trophies I will have to go back for myself.

A delightful journey behind the whiskers of a fuzzy feline friend, Stray is a wonderful game for both cat enthusiast and indie enjoyer alike. The story, while simple, is enchanting with each new discovery – with some that may just make you shed a tear. Gameplay doesn’t break new ground, but feels unique from the perspective of a cat, which is handled purrfectly. Stray is incredible, and one you should be playing right meow.

David Burdette is a gamer/writer/content creator from TN and Lead Editor for Gaming Trend. He loves Playstation, Star Wars, Marvel, and many other fandoms. He also plays way too much Call Of Duty. You can chat with him on Twitter @SplitEnd89.
Related Articles: Stray
Share
Tweet
Share
Submit