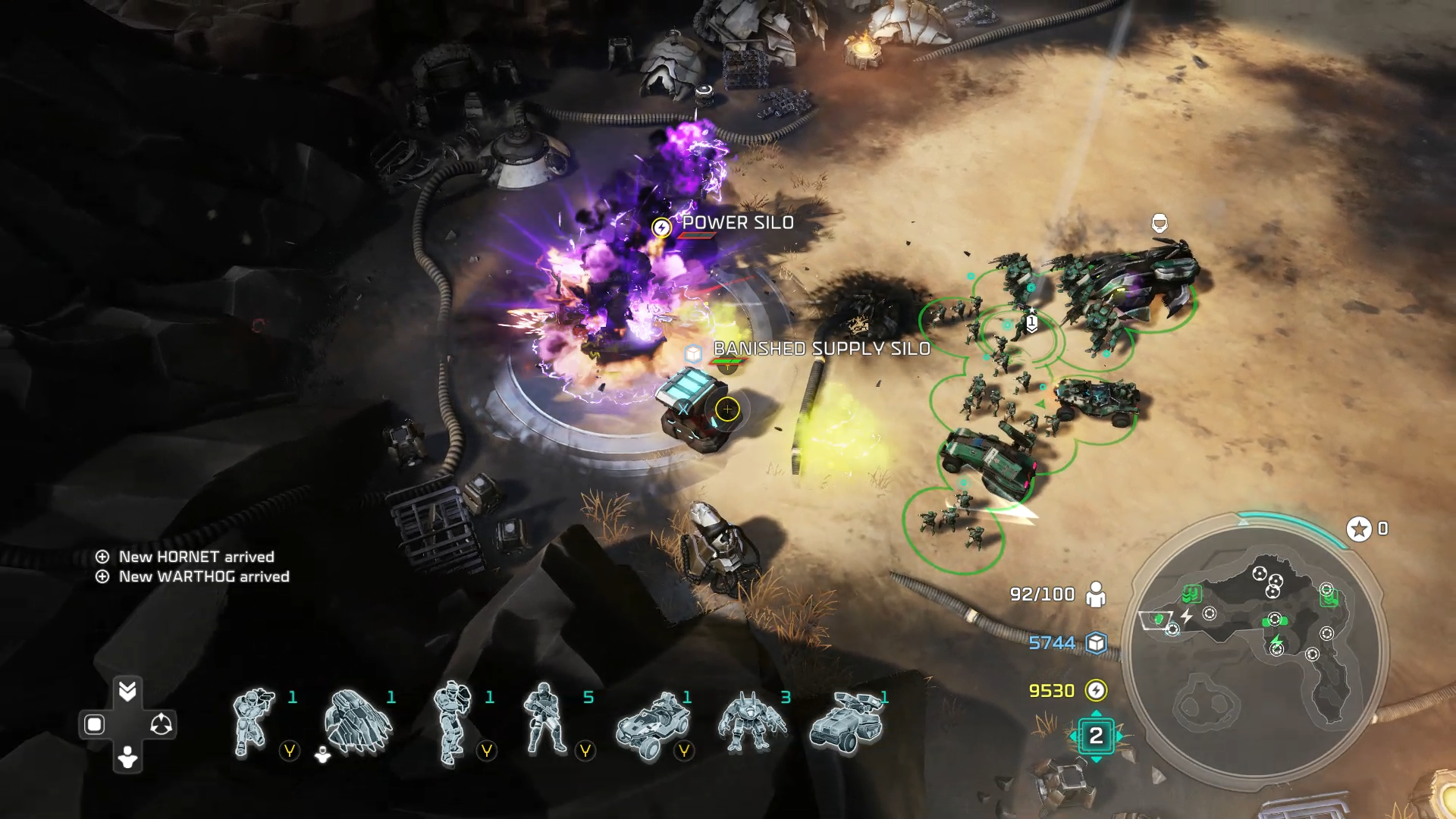 Halo Wars 2, in many ways, picks up right where the original Halo Wars left off. The story jumps forward through slip space 28 years and straight into the current post-Halo 5 timeline, still following The Spirit of Fire and its crew (insert speculation about Halo 6’s plot here). Just as with Halo Wars and the mainline Halo series, the cinematics, created by Blur Studio, are top-notch, as is the overall production value. However, the latest installment from 343 Studios and Creative Assembly suffers from the same dumbed-down strategic formula and general lack of content that its predecessor did, and instead finds itself serving as a fresh reminder of why RTS games don’t belong on consoles.

Captain Cutter and The Spirit of Fire, fresh out of a 28-year space nap, have stumbled out of the known galaxy and upon another Ark, the Forerunner facility responsible for creating the franchise’s eponymous Halo rings. While exploring the surface of this construct, they find a battered UNSC research station, the only remaining inhabitant of which is a terrified AI named Isabel. While stammering through a predictably uninformative explanation of what calamity befell the research facility, the very cause of said atrocity bursts in—Atriox. A powerful and gigantic Brute, with an uncharacteristically large intellect to match, Atriox is the leader of a breakaway, mercenary faction called the Banished that has continually wreaked havoc on the Covenant, proving all but unstoppable. Brave Captain Cutter and his intrepid crew, vastly outmanned and outgunned, intend to change that.

Despite being a continuation of its predecessor’s narrative, Halo Wars 2’s backstory felt shallow. Atriox’s past of violent slavery at the hands of the Covenant is interesting enough to make him a decent villain, but his reasons for hating humanity and the UNSC aren’t sufficiently fleshed out. Throughout the game, try as I might, it was hard to ignore the impossibility of Captain Cutter and his ship and crew realistically standing any chance of success against a truly massive force like the Banished that has, at least thus far, proved itself as nothing less than an interstellar steamroller, even against the powerful Covenant.

Something that seems completely synonymous with the Halo series at this point is the inclusion of amazing cinematics. In this regard, Halo Wars 2 did not disappoint.

The game’s cinematics, from Blur Studio, are beautiful and masterful. They served to weave the campaign missions together into a coherent plot, punctuated by some great action sequences. Impressively good voice acting and a powerful soundtrack stand out as well, serving to “take the edge off” the paltry story.

Just as Halo Wars 2 falls short with its story, so too does the length of its campaign.

With only 12 relatively short missions, the single-player campaign is disappointing. It clocks in at around 10 hours, much less if you’re an experienced RTS player. Thankfully, it does boast some gorgeous, albeit modestly sized, locations that showcase the franchise’s stylish aesthetic and succeed in pulling you into Halo’s now familiar setting. The UNSC and the Banished’s Covenant units do justice to their FPS counterparts, providing a colorful and delightfully explosion-filled battlefield. A good supply of diverse mission types and objectives was a welcome touch too, but ultimately, the whole ordeal is over far too soon.

If you’re not up to the task of subduing the Banished solo, or if you prefer to game with a buddy, Halo Wars 2 allows cooperative campaign play. While this feature is a welcome inclusion, it doesn’t distract from the glaring omission of being able to play as the Banished. Perhaps this feature will drop in a future DLC, but for the moment it only serves to further emphasize the shortness of this title’s single-player.

The true test, the veritable beating heart, of any real time strategy game is in its tactical depth.

Halo Wars 2 is just, well, too simple. The foundation of Halo Wars 2 is essentially a dressed up version of rock, paper, scissors and, I suspect, largely a necessity due to the heavy limitations of console control schemes (more on this later). On the battlefield, this translates to: vehicles are superior to infantry, infantry is superior to air units, and air units are superior to vehicles. Of course, there are certain infantry that are optimized to take out vehicles, vehicles that are designed to be anti-air, and so on. However, none of these exceptions really change the fact that this RTS is still just a simple game of rock, paper, scissors wearing fancy clothes.

What this means is that combat is purely about seeking ideal matchups with your enemy, which, in and of itself, isn’t far from the accepted tactical acumen of finding and exploiting your opponent’s strengths and weaknesses. That’s all fine and good, but being able to effectively maneuver your own units, or to isolate your opponent’s units, so that the aforementioned lopsided engagements can actually be initiated generally requires a fair degree of fast-paced micromanagement. On Xbox One, the system used in this review, this is scarcely realistic.

While the effort made to create a straightforward and streamlined control scheme for managing units, economy, and navigating maps is commendable, especially for a console, it just doesn’t work well. Period. Many complained of not being able to assign groups in the original Halo Wars, and even though this feature has now been added, it’s still flawed. Selecting units can be done individually, by dragging a clunky selection circle, by unit type, all units on screen, or all units on the map. There is no quick and easy way to select a desired set of diverse units and assign them to one of four available groups on the D-pad. And while in the chaos of combat, the selection tools’ flaws become even more glaring.

At one point, I labored excessively to create groups comprised exclusively of vehicles, infantry, or air units, thinking that I could move them en masse so that I’d be prepared for any rock, paper, or scissor thrown at me. This turned out to be an utter failure since groups of units default to the slowest member’s speed. This meant that my groups would arrive and attack at vastly different times (typically air units first), each one getting slaughtered by a superior class before the others arrived to support.

Managing multiple engagements or bases, something that is a frustratingly common occurrence in-game, is a genuine pain in the ass. It’s already complicated by grouping issues, but further complicated by map navigation. Whereas with a mouse and keyboard you could easily click around on the minimap, here you’re forced to cycle through bases and unit groups (which you might have decided to forgo since it’s so clunky) using the D-pad. In the end, you’re only able to effectively manage one large group of units and one base, possibly a little more if you’re extremely adept at manipulating the controls and map navigation.

The special abilities of units, which, once again, are nearly impossible to micromanage in battle, and the leader abilities like air strikes or healing powers, do serve to break things up a little, thankfully.

Base building and economic management, a mainstay of the RTS genre, are similarly uncomplicated. All buildings, including HQ’s and defensive turrets, can only be built on designated squares. A given base can only support a predetermined number of buildings depending on its location, which typically means you get to choose between either having a strong economy, or having the ability to fabricate all of the units you know and love from the Halo series, unless, of course, you want to manage a second or third base. Oh, and if you do have multiple bases, you’re still only allowed one unit production rally point per map, so you might have newly produced units running through no man’s land and ending up dead en route.

Multiplayer modes Deathmatch, Domination, and Strongholds offer some additional content after completing the campaign, as does the addition of Blitz, a new card deck-based multiplayer mode. Given that these are still based on the same unappealing mechanics, Halo Wars 2’s multiplayer seems little more than an inadequate consolation prize.

As both a passionate Halo fan ever since Master Chief first stormed onto my Xbox so many years ago, and as an RTS addict, Halo Wars 2 has been a bittersweet experience. I had high hopes, and at first, really enjoyed myself, but as I delved further into the game’s watered down core, the smiles and satisfaction gave way to an acute sense of plainness and boredom.

A strategy gamer’s title this is not. If you enjoyed the first Halo Wars, you’ll likely be very happy with its sequel. Halo Wars 2 delivers an expertly rendered and familiar Halo setting with killer cutscenes and a polished exterior. For anyone seeking more than a very casual RTS experience, look elsewhere, or at the very least, grab it for PC instead (on which, hopefully, the controls will be more efficient).

Boasting high production value and the minor intrigue of what a new villain might mean for the greater series, Halo Wars 2 is fantastic for casual RTS gamers, but probably not for anyone else. Its relatively flat story, short campaign, and strategically shallow mechanics hold it back from greatness, instead relegating it to being yet another example of why RTS games don’t mix well with consoles.