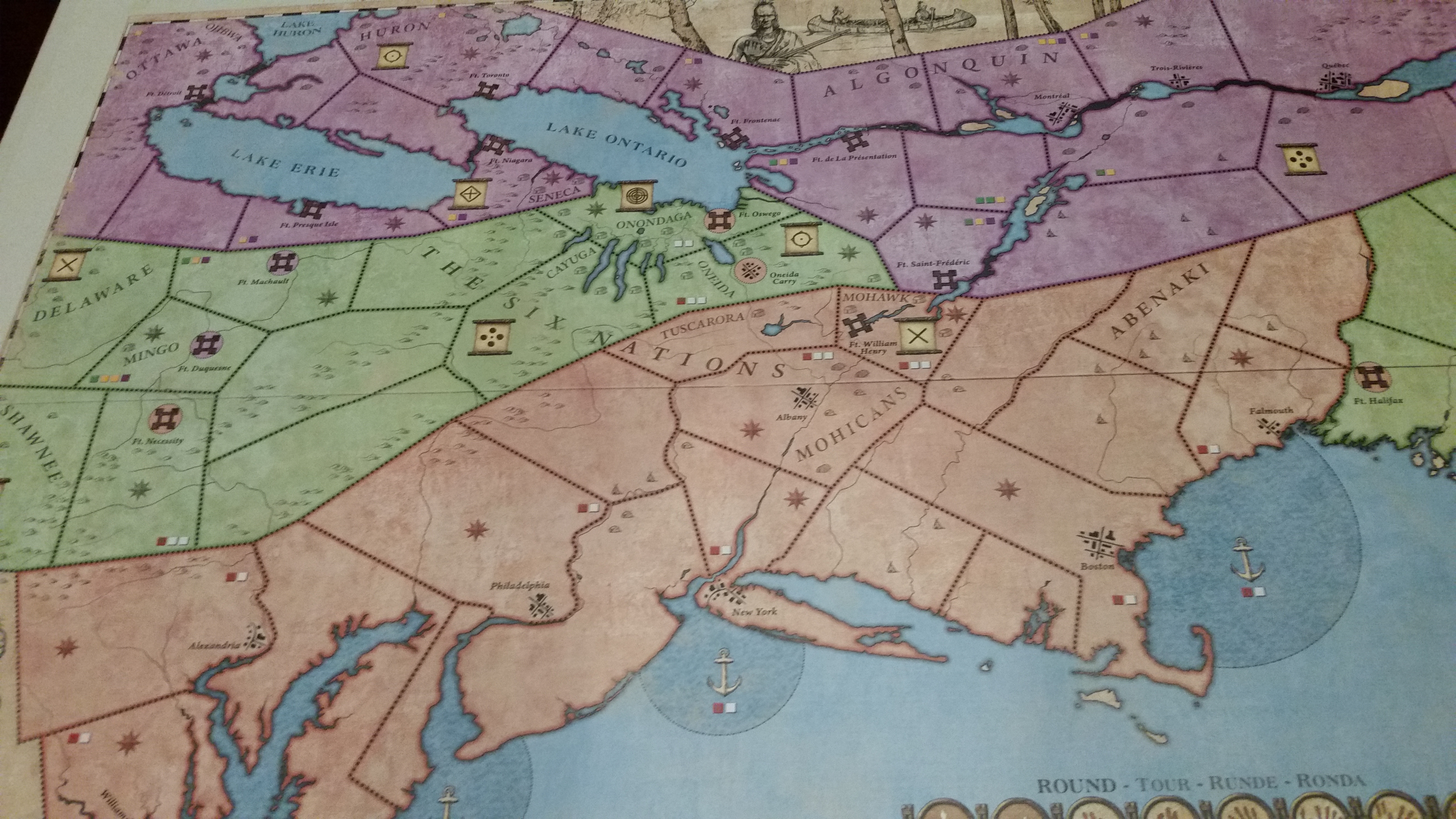 You may recognize the American Revolution as the war that created the United States, but the groundwork for that rebel uprising started a couple decades earlier with the French & Indian War. The war between France and Britain solidified Britain’s North American dominance while subsequent political actions caused a divide between the monarchy and its colonial subjects. It’s fitting then that Academy Games would expand its Birth of America series to this conflict in the newly released 1754 – Conquest.

Much like its predecessors 1812 and 1775, 1754 is a light war game where factions, battle for geographical supremacy. Here, the French control the Ohio Valley and Canada while the British control the colonies. In the land between, Natives forge uneasy alliances between both factions in the hopes of preserving some sort of sovereignty over themselves. The map is colored in purple, green, and red to show starting control for French, Native, and British lands respectively, all divided into separate areas. Some of these areas contain victory points which help determine a winning side at game’s end. While the map is beautifully illustrated, the victory points are difficult to see as the board gets populated with armies.

Bright, colorful map is large enough to easily fit the largest of armies.

Each faction is split into two smaller factions, allowing up to four players to play a team game. The French are comprised of their regular army and the French Canadians while the British are made up of their redcoat regulars and the colonials. Each faction has its own set of colored cubes as well as dice. The colors are distinctive and easily discernable on the map.

Your turn begins by getting reinforcements of four new cubes to add to the board. Then, you select a card to initiate movement. Each faction has its own deck of cards which drive play. A hand of three cards will contain at least one movement card. Each movement card allows you to move a certain number of armies, which are all the cubes from one area. One to four armies may move one, two, or three spaces depending on the card. Event cards are one time bonuses that can strengthen your position or influence the outcome of a battle.

Within the deck is a special movement card. In addition to a powerful movement value, this card can also help trigger a truce. Starting with turn three, when both factions of one side play their truce cards, the game ends, at which point whichever side controls the most victory points wins the game.

One of the strengths of the Birth of America series is the individuality of the factions in battle. French and British regulars have battle dice that have equal chances of scoring a hit with a bullseye or allowing for a withdrawal with a blank result. Canadian and Colonial units hit less often while adding a chance to flee. Fled units run from battle which can weaken your army, but these units come back and join your reinforcements on your next turn.

Native armies also have a chance to flee. While they aren’t a playable faction, Native armies in the area will join the side of whichever army first comes to join them. Initially, it’s the French that have the most Native allies, which fits historically. As a battle begins, the Native fight alongside whichever ally they are alongside. However, should their allies all fall or flee during the ball, any Native armies that remain immediately join the opposing side’s remaining troops. All this means the army composition is important. Regular army troops will help ensure your Natives remain your friends.

Regulars will stand and fight until withdrawn while other units may flee the field.

For those that have played previous games in Academy’s Birth of America series may realize all this sounds familiar. The core system is much like its successful predecessors, but there are some great new additions to the game.

The first is the inclusion of forts. In the French & Indian War, regional forts were essential to control waterways and trade routes. These defensive fortifications were tough to crack, and in the game, the defending army gets to roll a special fort die. When you roll a hit on it, it cancels one of the hits made by the attacking army. Retreating armies have a chance to burn down the fort, preventing the prevailing attackers from using it themselves. Forts are powerful in defense, and this adds some nice strategy to the game.

As it was in the war, the control of Louisbourg is crucial in this game.

For a light war game, Academy’s attention to historical detail is worth noting. The British start with a sizeable advantage in the number of ports they control. Historically, the tide of the war turned when the French lost the port of Louisbourg, so it’s nice to see this key town be the only one worth two victory points. Even the event cards have representations of key figures of the war, with events that relate to their role. As someone who covered this war in his classroom for many years, this historical nod is refreshing.

Even if you own previous titles in the series, this game is worth adding to your collection. The game is well balanced, has some nice strategic depth, and is varied enough to keep it fresh. It may be a light war game, but its use of cards and area control make it very accessible to gamers who are unfamiliar with the genre. Academy Games has done a great job of adding new features without damaging the core system that’s made the series so successful.

1754 Conquest takes the best of Academy Games' Birth of America series and adds some great new features. Historical details shine through as forts, ports, and Natives all play a key role in the success of your side. Veterans or newcomers of the series will find a lot to like about this game.