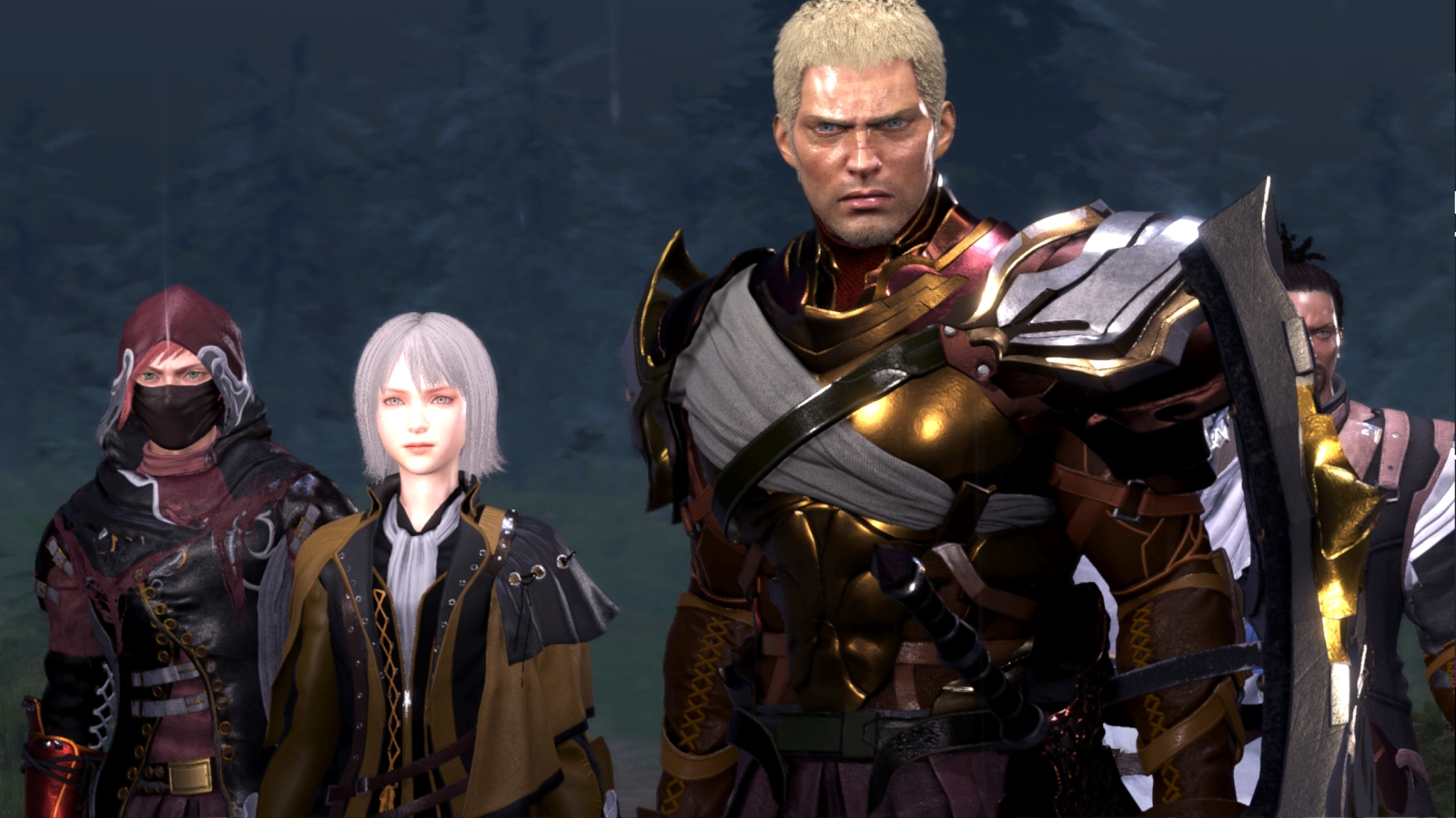 It’s time to kill Chaos. Jack has no memories other than this need – this hunger. Chaos must die by his hand, and four strangers share this wish along with a lack of memories. Deemed the Warriors of Light by the King of Cornelia, they journey around the realm to defeat the four fiends and their master, but not everything is as it seems. Does Chaos truly exist? Or is he just a fairytale?

Stranger of Paradise: Final Fantasy Origin is a prequel to the original Final Fantasy, taking place in the same world. If you’re familiar with that game, saw any of the marketing, or have looked at SquareEnix’s merchandise lately, it’s pretty obvious where this plot is going but I’ll do my best not to spoil anything in case you aren’t. While the story is not the focus of Stranger of Paradise, it’s undeniably a huge draw because of how seriously it takes itself. Near the beginning of the game, Jack storms out of a room after finding out the foe they just busted wasn’t actually Chaos and starts playing Limp Bizkit on his iPhone he suddenly has. It’s hilarious, and I love it. However, Stranger tries to have its cake and eat it too – not much happens over the twelve hours it takes to beat the game, until, that is, the final two hours where all the plot was shoved. It feels tongue in cheek how Jack actively prevents people from expositing for the majority of the story, but the ending feels like it should have had a full, 40 hour JRPG to set it up. Don’t get me wrong, I really like the ending and the way it connects to FF1, but it could have been far more satisfying.

Likewise, the characters are likable… but very poorly defined. Neon, Jed, Ash, and Sophia all have a moment or two throughout the story. I like what I’ve seen from them, but there isn’t nearly enough to get me to actually care about anyone other than Jack. Even then I only started to care near the end. I guess their personalities are supposed to come across through in-game dialogue, but that’s more often than not nonsensical, poorly written, and contradicts what’s actually going on in the story and whatever fight is happening. For example, I could kill a whole group of enemies in a single combo without getting hit, but someone will still say how “we barely survived that” and “we’ll do better next time.” The whole game feels like it was written by aliens who have only seen Memento. Some bits of the story are out of order or misleading to great effect, but the majority of it just feels like it comes out of nowhere.

So if the focus isn’t on the story, then it must be on the gameplay. Thankfully, combat is pretty dang satisfying here. It plays like a more flashy Dark Souls, which makes sense given this is the same team that made Nioh. You can press Square repeatedly to perform a combo then, at different points in the combo, press Triangle to use some MP and unleash a special skill. These skills can be anything from an overhead slash with your buster sword, readying a charge attack, to even casting a spell. You can set what ability you want at each point in the combo, which makes this system highly versatile – especially when you mix in Jobs. 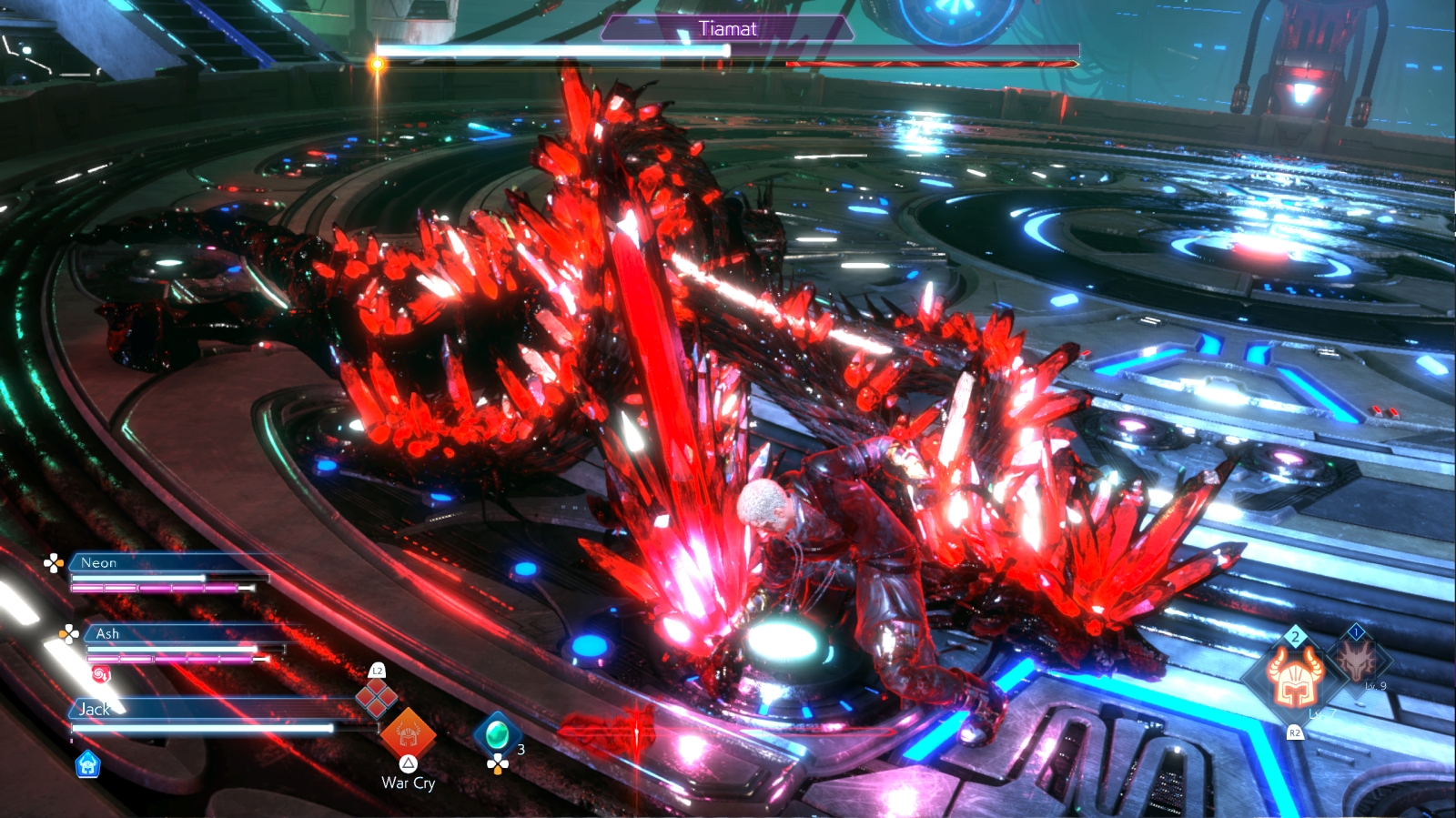 Just like a few other Final Fantasy games, all of your characters can equip Jobs which completely change how they fight. While each of your party members can only use one Job at a time, Jack can swap between two by pressing R2 when not attacking or after using an ability to cancel out of its cooldown animation. You begin with only a handful of jobs, such as Swordfighter, Mage, and Lancer, but leveling those will eventually grant you access to Advanced and Expert Jobs like Dragoon, Dark Knight, and Sage. Your characters don’t have levels and stats are mostly determined by gear, but playing as a job will earn skill points you can then spend in their tree for bonuses and new moves you can then take into other Jobs. It’s complicated to explain, but simple in practice: play every Job to unlock more and make your favorites more powerful.

Each Job comes with its own unique ability usable when not attacking. Spellcasters can bring up a menu to fire off a fireball or heal, beefy physical attackers can set up a counter attack or buff themselves, and much more. Most of them are pretty fun to use, but spell casting feels very clunky. Holding the button brings up a radial menu and waiting for a bit will allow you to cast stronger versions of the spells, but the game really wants you to remain mobile and constantly on the offensive, so these are only really useful when attacking from out of an enemy’s range. While this is easiest before a battle begins, your party members will very rarely become useful and distract a boss for a second or two for you to shoot off a spell. 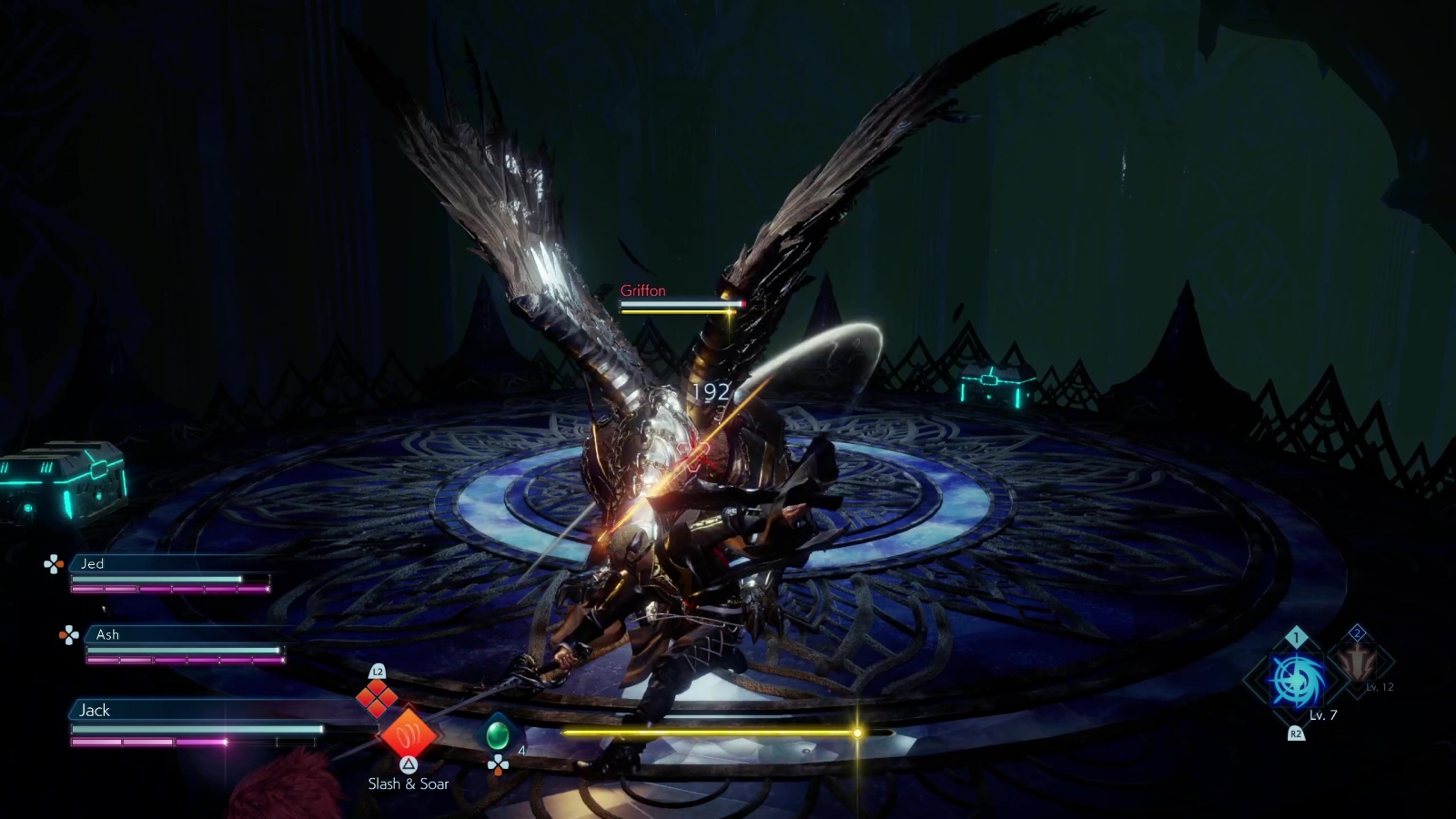 Your party members being essentially useless does encourage you to participate in multiplayer, but from what I’ve tried it doesn’t work all that well. While it does make the game significantly easier with everyone being able to use two very powerful jobs and be constantly attacking, on PC at least and with my internet connection, people would constantly fail to join my game. On the flipside, when I joined other people’s games, attacks would stop registering for minutes at a time, which makes it impossible to actually help the host. In the long term of the level, it also prevents you from using the Soul Burst to finish off enemies. Every foe has a Break Gauge under their health bar which, when depleted, allows you to instantly kill them in a visceral manner, increasing your maximum MP for the stage. You need a lot of MP to consistently use abilities, and seeing as you only start with two bars the Soul Burst is an absolute necessity. It’s fun to use in single player, but having to share in multiplayer and it not working half the time is very frustrating.

This brings us to the biggest point of the review: do not, under any circumstances, play the PC version of Stranger of Paradise. This port is an absolute disaster, and not in a fun way. While you have a decent amount of graphics options, none of them will save you from issues like white lines at the edges of the screen sometimes or the persistent slowdown when using the Soul Burst. While I can ignore the former, the latter can make the game a chore to play. Every single time you use the Soul Burst, which is all the time, the game goes slow-mo while the effect is on screen. This becomes more exaggerated the higher your fps, so while 120 feels buttery smooth in a fight, once you start taking enemies out (which happens pretty quickly, damage is high all around) it becomes a chore. There are more issues, like the ridiculous amount of Vram the game uses without even looking that good or the horrendous HDR, but I think you get the point.

Stranger of Paradise is a good game, but it had the potential to be a great game. Its self seriousness backfires to a genuinely endearing degree, but also leaves the story poorly fleshed out and possibly hard to follow. The combat may be fun, fluid, and visceral, but issues with the PC version should make players look to other platforms.

David is the kind of person to wear his heart on his sleeve. He can find positives in anything, like this is a person who loved Star Fox Zero to death. You’ll see him playing all kinds of games: AAAs, Indies, game jam games, games of all genres, and writing about them! Here. On this website. When not writing or playing games, you can find David making music, games, or enjoying a good book. David’s favorite games include NieR: Automata, Mother 3, and Gravity Rush.
Related Articles: Stranger of Paradise Final Fantasy Origin
Share
Tweet
Share
Submit