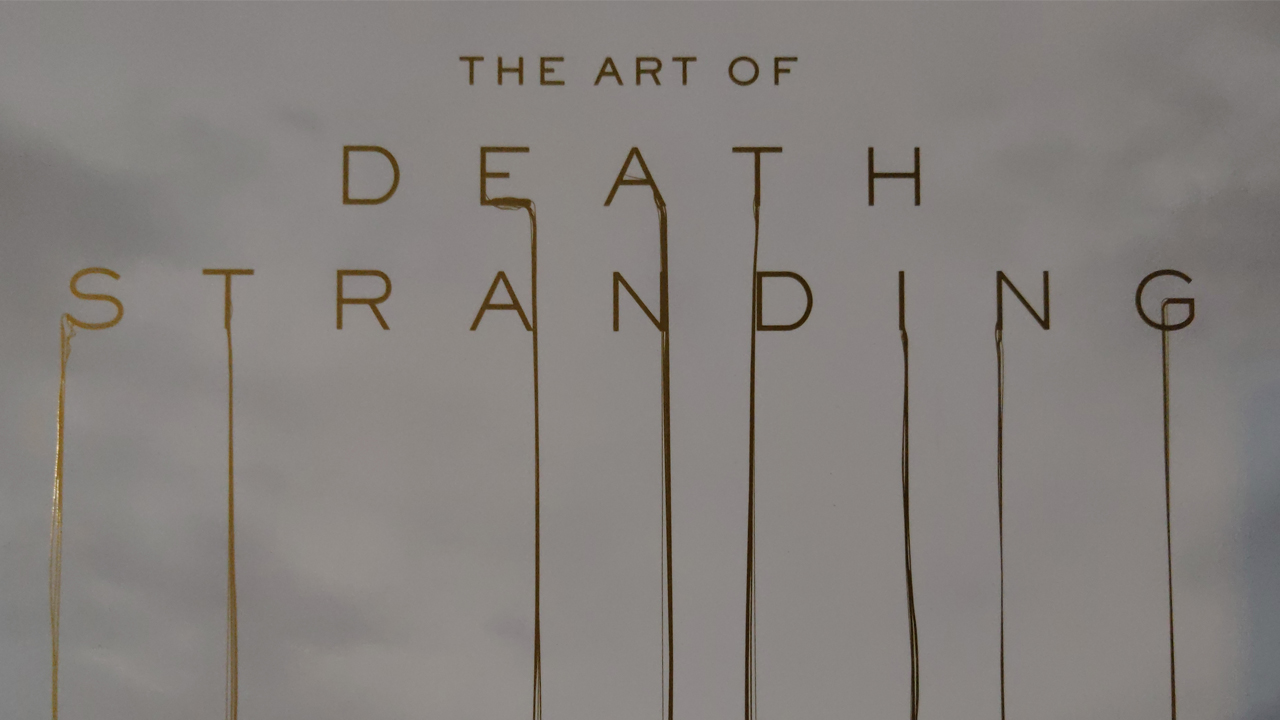 There’s strange, and then there’s Hideo Kojima level of strange. Death Stranding tells the story of Sam Porter Bridges, a package delivery transporter who braves a bizarre future where a massive event called the Death Stranding has killed most people with a tar-like substance that absorbs anything that touches it, spawning twisted creatures called BTs. Figuring out why is the hard part, and that’s where you come in. As crazy cuckoo-nuts as the game is (and however it looks from the outside, it’s even more crazy than you think), it’s also one of the best games of 2019, as you can see in our review from Codi Spence, earning a very rare 100%. Now, thanks to a team-up with Titan Books, we get a peek into the strange mind of Designer Hideo Kojima and artist Yoji Shinkawa in The Art of Death Stranding. With eyebrows raised, let’s dive in. 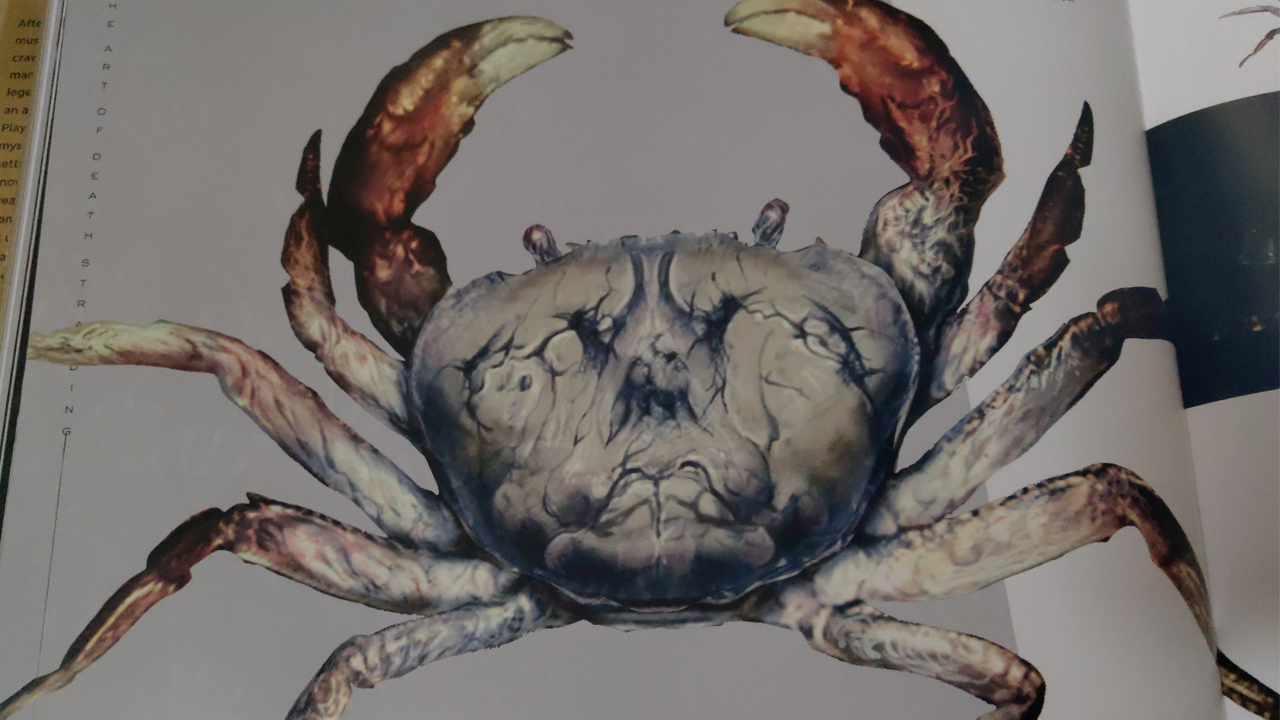 The Art of Death Stranding is split into two sections — characters and locations. Across 256 pages, the book covers the people, equipment, monsters, and places you’ll visit throughout the game’s 40-50 hours of runtime. Kicking things off with Sam Bridges, we see some very familiar design and art style resembling what can only be described as somebody looking, dare I say it, not unlike Solid Snake. Throughout the next 19 pages you can see this character morph from an ultra-modern archetype into several iterations as Sam’s suit evolves into what we eventually saw on screen. One thing is also immediately clear — Norman Reedus was the clear choice for this character from the start. 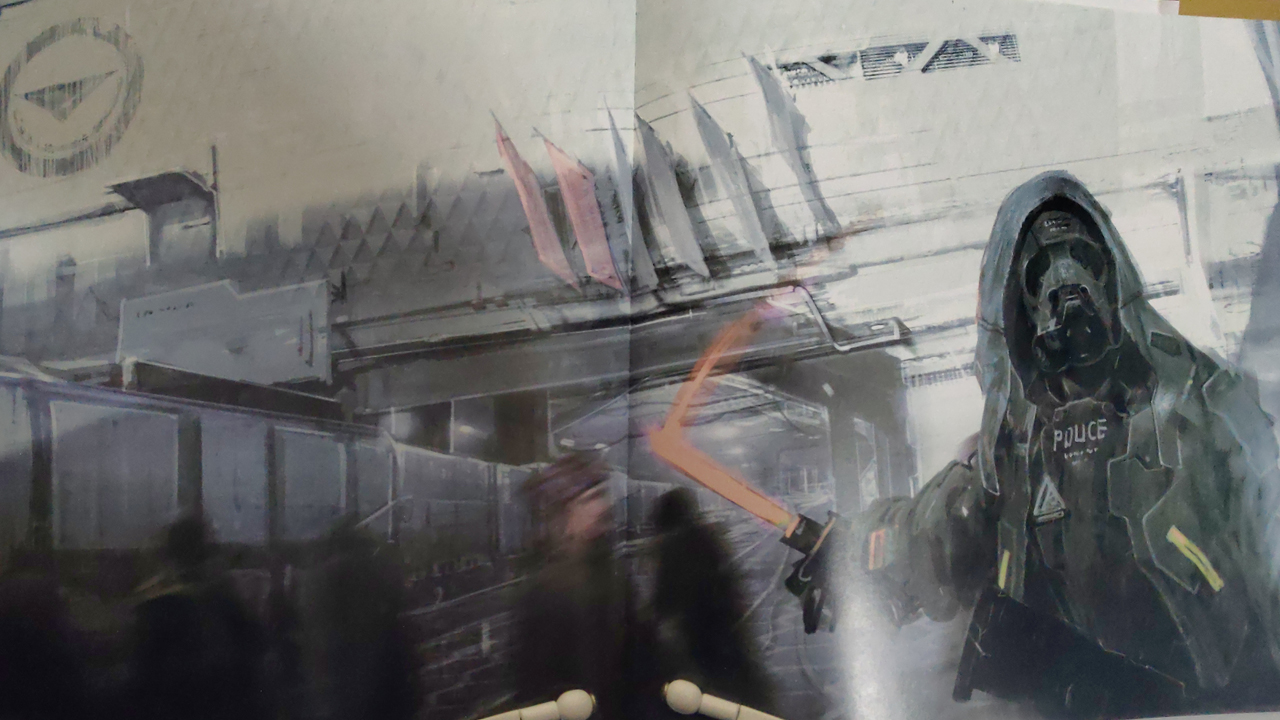 Ultra-wide 2-page spreads are common in this art book. It’s a welcome sight.

The Odradek (the little flappy excitable arm thing that hangs out over Sam’s shoulder, detecting BTs) is one of the most recognizable pieces of Sam’s equipment (and was once organic!), but a great deal of attention is also paid to the rest of what sits on his back. Armor, backpacks, automatic loaders, and handcuffs are all shown in extensive detail before giving way to the strangest item Sam can carry — the BB. BB stands for Bridge Baby, and the pods they live in, according to the book, were inspired by Egyptian sarcophagus. If I had one complaint, and it’s truly a minor one, it’s that very little page time is devoted to the BB pod. It’s such a strange concept straight out of the craziest corner of Kojima’s mind, so I would have loved to see more about it. 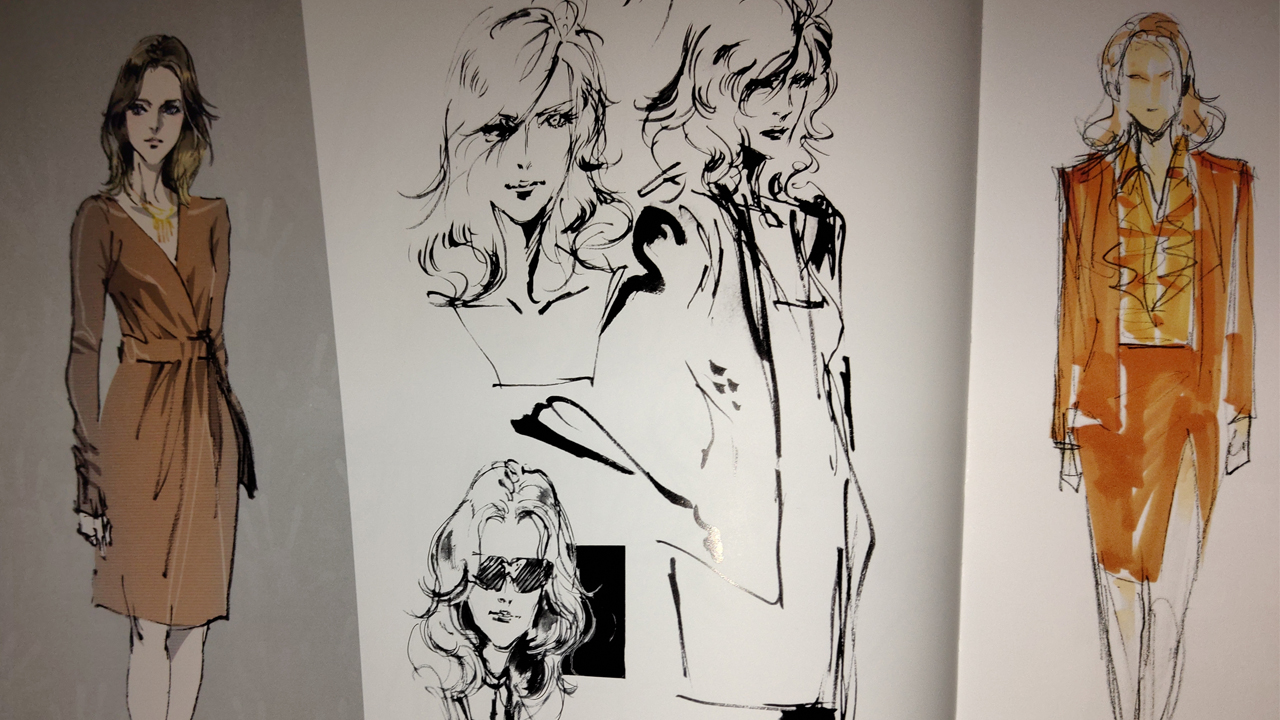 From the realistic to the surreal, all of the artwork is beautiful.

Amelie, Die-Hardman, Deadman, Heartman, Mama, Lockne. No, I’m not doing some sort of bizarre word association — these are names of characters in Death Stranding, and each one of them gets a two page spread in this book, showing early sketches progressing to their final iterations. Following this, the book also showcases the various ancillary characters and their equipment, sometimes showing upwards of a dozen different facial concepts. Beyond these pieces lies about two dozen pages of absolutely phenomenal location, enemy, and concept spoilers, picking back up at page 116 with BTs. 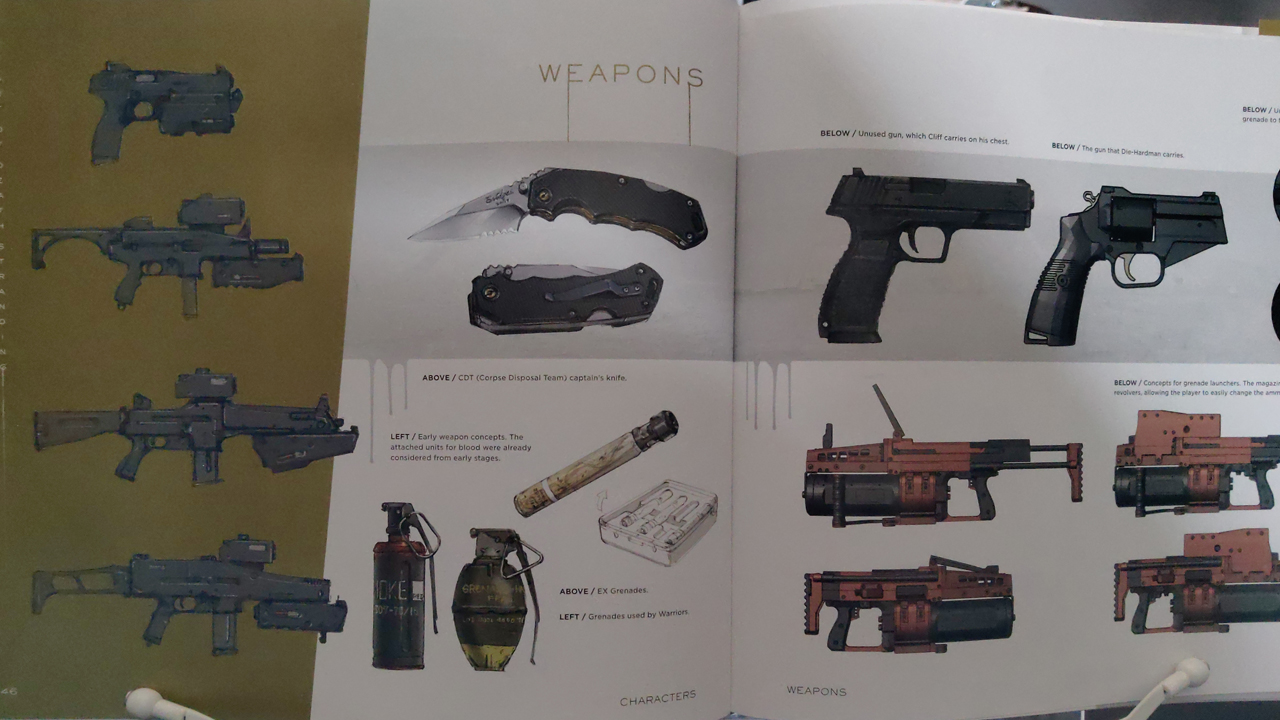 Transforming weapons are a big part of being a courier in Death Stranding.

Rounding out the first half of the book, weapons and vehicles get a fair bit of attention. I’m always amazed when pencil sketches so closely match the final render as they do here. There are several concepts and even final pieces that were never used in Death Stranding, including a grenade that projects holograms, a pistol for the character Cliff, and even a catapult structure. 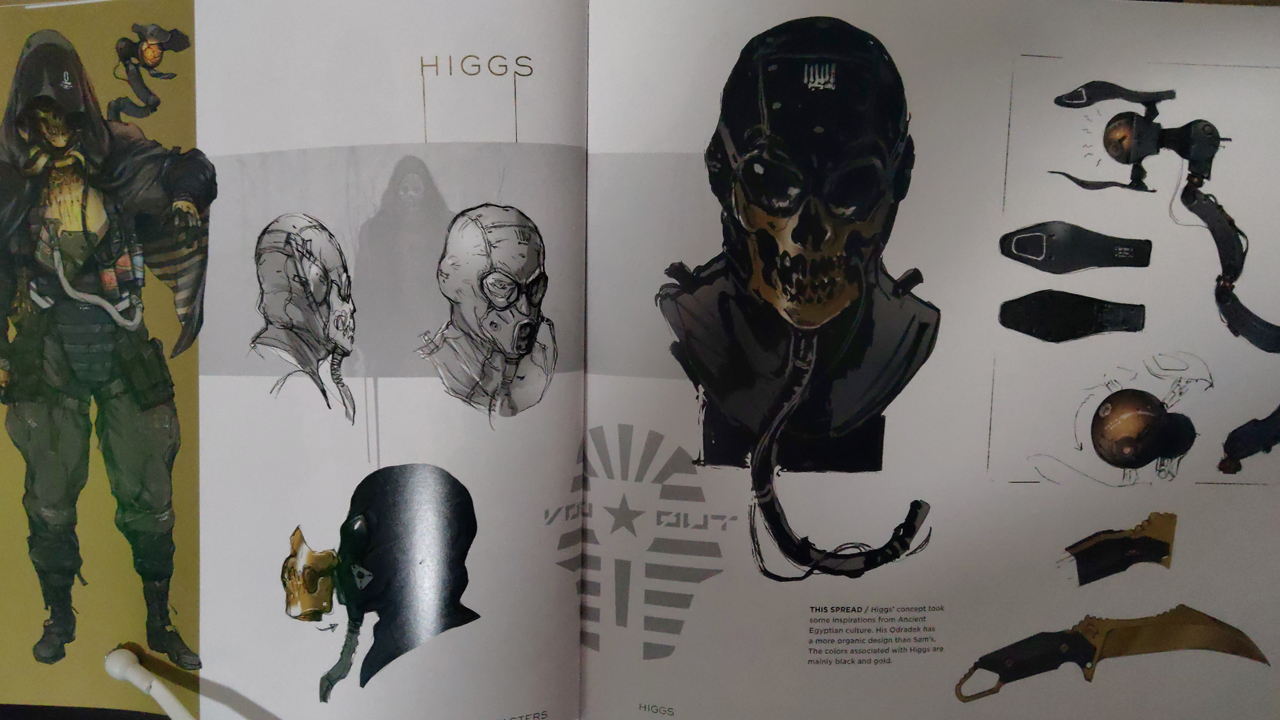 Every character (excepts the BBs) gets a lot of attention, from concept to final.

In the latter half of the book there is an entire section devoted to the various locations (called “Knots”) from the game, including a few unused ones. These concept art pieces, and the accompanying bits of story, bring these pieces to life. It’s very easy to imagine them being folded into the fantastically bizarre storyline of Death Stranding, and I’m very glad to see them represented here. 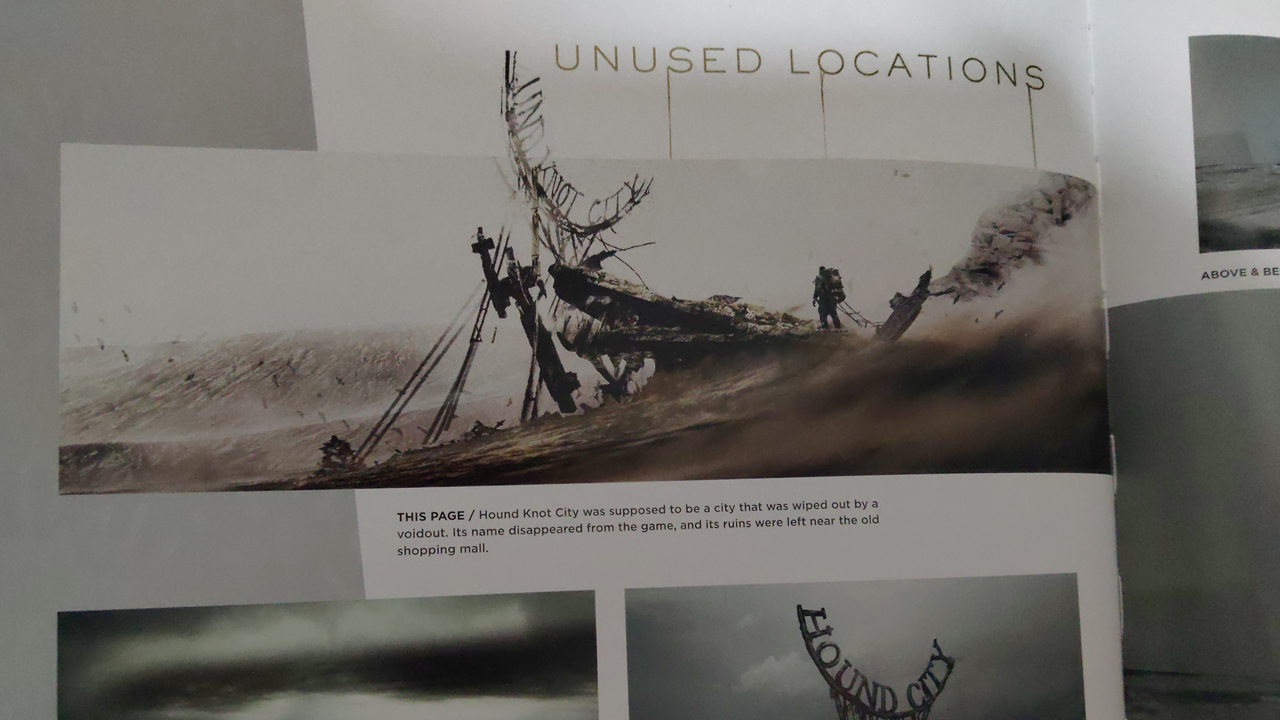 The unused locations make for interesting “what could have been” opportunities.

One of the aspects I loved most about the approach Titan Books took with The Art of Death Stranding was that, despite a great deal of amazing concept art, the book presents a lot of information without devolving into deep story spoiler territory. There is location art to be sure, but without the storyline to tie it all together, you are fairly safe to thumb through this fantastic coffee table book. 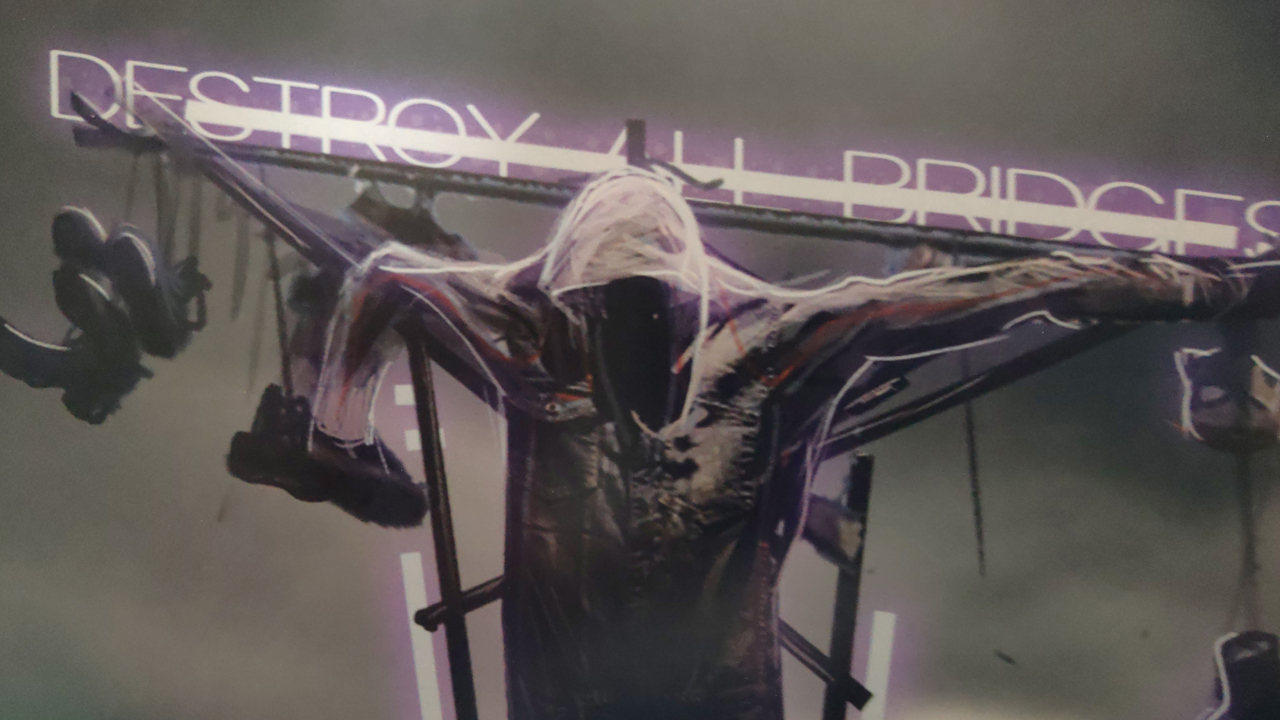 Being a coffee table book, the Titan Books team worked to make it as appealing outside as it is inside. The page edges are a shiny golden color, matching the dust jacket with its gold letters that streak down the front onto a deserted beach scene so frequently shown in trailers. Inside the dust jacket, the book itself is entirely black, with shiny black lettering, making for a subdued and somewhat sinister look.

The Art of Death Stranding

Titan Books and Kojima Productions have done a fantastic job giving us a look into the bizarre mind of Kojima and his amazing art team. Death Stranding gives players plenty to noodle on, and this book shows just how it all came together -- it’s a must have for any Kojima fan.

Ron Burke is the Editor in Chief for Gaming Trend. Currently living in Fort Worth, Texas, Ron is an old-school gamer who enjoys CRPGs, action/adventure, platformers, music games, and has recently gotten into tabletop gaming. Ron is also a fourth degree black belt, with a Master's rank in Matsumura Seito Shōrin-ryū, Moo Duk Kwan Tang Soo Do, Universal Tang Soo Do Alliance, and International Tang Soo Do Federation. He also holds ranks in several other styles in his search to be a well-rounded fighter. Ron has been married to Gaming Trend Editor, Laura Burke, for 21 years. They have three dogs - Pazuzu (Irish Terrier), Atë, and Calliope (both Australian Kelpie/Pit Bull mixes).
Related Articles: The Art of Death Stranding
Share
Tweet
Share
Submit