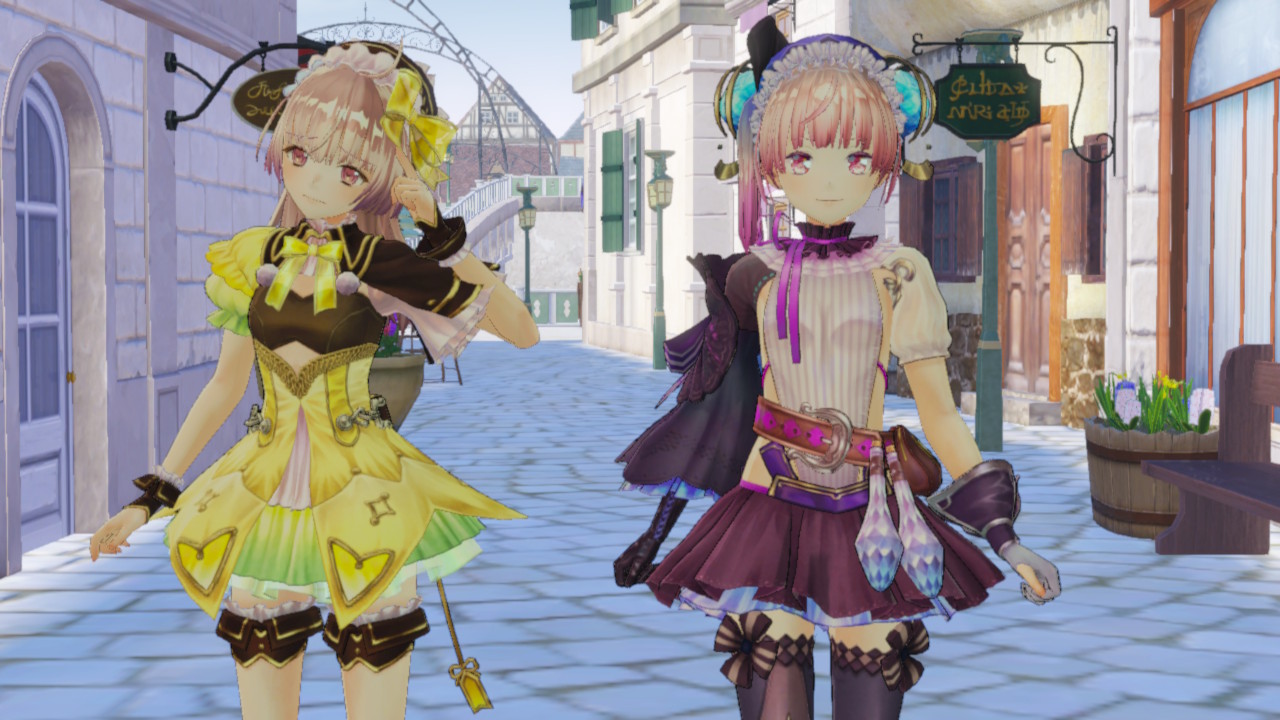 I like a lot of JRPGs, including Tales of Symphonia, Xenoblade Chronicles, and various Pokémon games. I like the characters, their stories, and the struggles they go through to defeat evil and save the world. I like the engaging way these games handle battles and exploration. They really capture the feeling of an epic adventure that’s sorely lacking from day-to-day life in the real world. So when a quick Google search told me that Atelier Lydie & Suelle: The Alchemist and the Mysterious Paintings told me that the game was a JRPG, I was excited to play it. Perhaps my expectations were a little too high.

The first thing I noticed upon starting the game was that all of the voice acting was in Japanese. Like many Japanese voices for young female characters, the voices for main characters Lydie and Suelle are extremely high-pitched to the point where they hurt my ears. I searched the Settings menu for language options; finding none, I settled for muting the voice-over volume instead. That should have been my first clue that this game isn’t what I was expecting.

The game opens with the titular twin girls Lydie and Suelle gathering materials a short distance from their home. At first, it seemed like a bit of a strange way to start out. In hindsight, however, I realize that it was meant to prepare me for what I would spend most of the game doing. Once they’ve finished getting what they need, they begin walking back home. At this point, the game describes them in a narration rather than letting the player decide for themselves what to think of the girls. This is the first of many failures to understand the concept of “show, don’t tell.”

Above: Man describes himself.

When the girls get home, they proceed to mess up what they were trying to make, and their idiot father Roger is introduced in the first of many instances where he is shown to be completely useless. Of course, in my opinion, the apples haven’t fallen far from the tree. Lydie, the “studious” one, doesn’t really come off as being all that smart, and Suelle, the “tomboyish” one, doesn’t really seem particularly strong or tough. Suelle seems to be a little better at getting things done and standing up for herself, but that’s the only personality difference I can see between them, and the only personality trait in either of them that I noticed while playing.

Even if their characterization wasn’t so weak, their outfits are very inappropriate for girls that age. I realize that the Japanese feel differently on this subject, and that fans of the series would probably make death threats over “censorship” if the girls’ outfits had been changed during localization, but it needs to be said. Sometimes, things should be changed during localization. Warning: Potentially NSFW screenshot below.

See how the section of cloth covering Lydie’s front is a little too narrow? Sue’s hands partially cover it, but there’s a huge hole on the front of her dress that shows her entire bra. And these girls seem to be about 10 or 12. That might be considered okay in Japan, but it sure as hell ain’t okay in the west.

For the first three hours of gameplay, tutorial messages came up constantly, always separate from the actual gameplay concepts they were trying to teach rather than being placed appropriately within the gameplay. No matter what kind of game you’re making, this is the worst possible way to handle tutorials. It’s not only boring, but ineffective—when you dump that much information on a player without letting them put it into practice, they’re very likely to forget a large chunk of it. Worse still, the text often has awkward wording and grammatical mistakes. For me, most of the actual learning occurred through trial and error.

The girls’ goal is simple: to become the top-ranked alchemists in the land. To me, this story’s only strength is its simplicity. The main protagonists aren’t trying to help anyone except themselves, and they have no external motivation for their goal. The world-building is extremely sparse as well—there’s one town, and not all of the people in it even talk. Some people literally just stand in one place and don’t interact with the player or the environment in any way. Furthermore, Lydie and Sue get ridiculous favors from multiple important people for no reason at all. The kingdom’s top alchemist, Ilmeria, agrees to tutor them for free as if she has nothing better to do. At Princess Mireille’s request, Prince Mathias accompanies the girls as an unpaid bodyguard, a task for which they show zero gratitude, continually teasing him and saying that he “doesn’t have a job.”

What a nice way to greet a prince.

This is especially egregious because he is far and away the best fighter of the three, which means he literally saves their lives every time they leave town and encounter monsters. Battles are fought in a very mediocre turn-based system, in which Lydie is largely useless with her weak little staff, Sue somehow has two revolvers that never run out of ammo, and Prince Mathias uses a big sword. I didn’t get into my first battle until 45 minutes into the game, partly because battle isn’t the main focus of the game. The main focus of the game, and easily its most well-executed element, is the crafting system. You can craft items from materials that you find all over the place, which vary widely in quality and secondary effects. Most of the things you make, though, are for Princess Mireille, who’s in charge of alchemist rankings.

The game generally follows this cycle:

Atelier Lydie & Suelle: The Alchemist and the Mysterious Paintings is really little more than a giant chain of fetch quests all strung together into something that’s meant to pass for a story and a game. As far as I can tell, everything works as intended, and I suppose some people would find it enjoyable. Somebody’s got to like this kind of gameplay for this to be the 19th game in a series. But it’s really not my thing.

Atelier Lydie & Suelle: The Alchemist and the Mysterious Paintings

If you really love crafting, Atelier Lydie & Suelle: The Alchemist and the Mysterious Paintings might be your jam. But if you like literally any other aspect of a typical JRPG, you’re going to be disappointed. It might be worth $20 for the curiosity, but at $60, I really can’t recommend it to anyone who doesn’t already like the series.

Kyle is an unashamed longtime Nintendo fanboy. Some of his earliest and fondest memories are of playing Super Mario Bros. 3 on the NES with his grandmother. His favorite series are Fire Emblem and Metroid. Outside of gaming, Kyle is also a serious Whovian, favoring the Seventh Doctor and Ace as his preferred Doctor and companion. He also loves superhero movies, power metal music, and basically anything in the space fantasy genre. Avatar by Smashley (@SmashleyDraws on Twitter).
Related Articles: Atelier Lydie & Suelle: The Alchemist and the Mysterious Paintings
Share
Tweet
Share
Submit