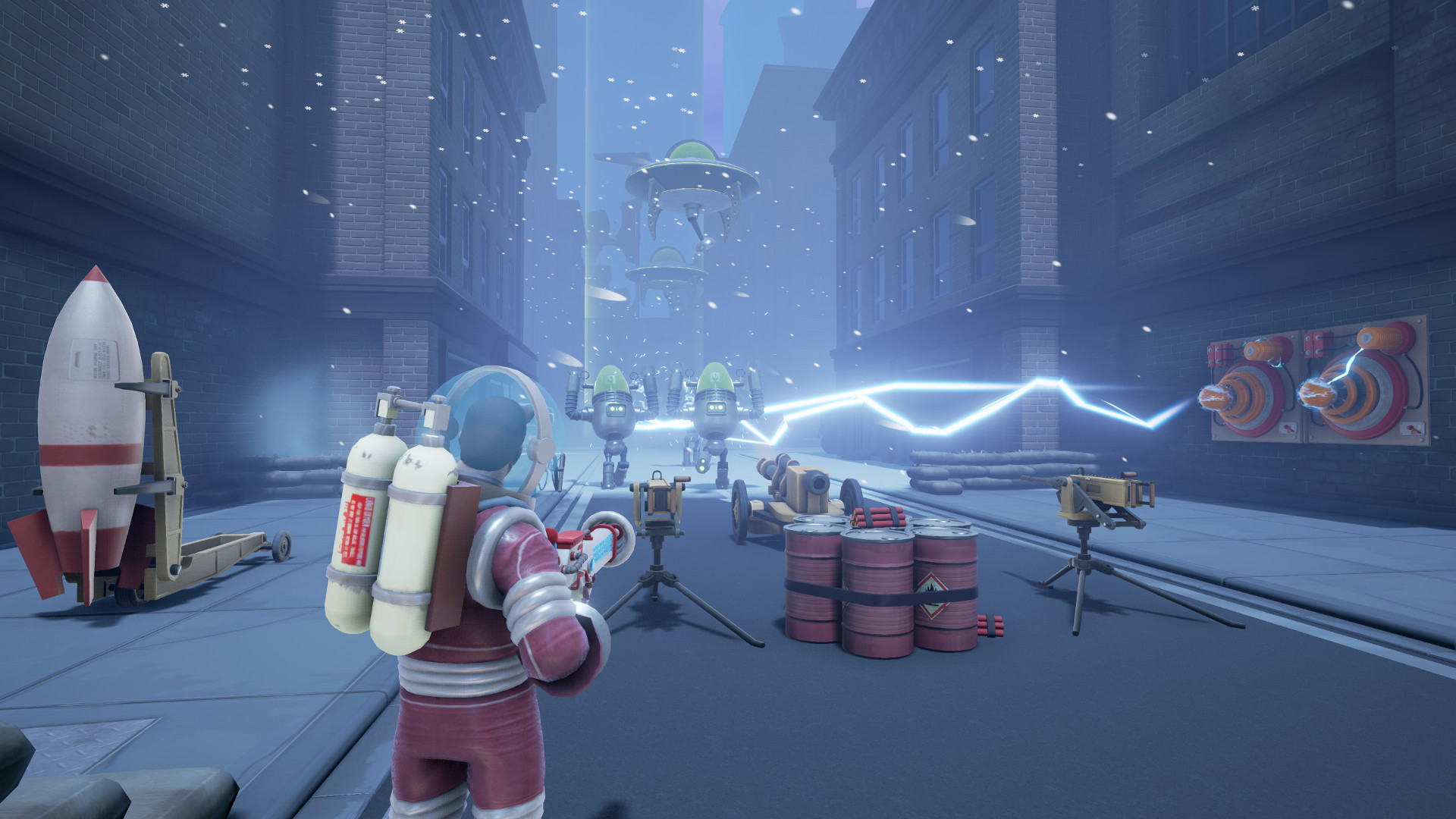 Fortified!, a 1960’s sci-fi themed tower defense game made by Clapfoot, is at its essence a balancing act. A capable third-person shooter combined with the strategy of placing defensive structures, both between and during waves of Martian invaders, works quite well but it isn’t all good news.

Our team of heroes is led by the Captain, a stalwart American soldier with a classic Steve Rogers look. The Rocket Scientist is as quick as she is smart and favors explosives, while the Agent is possibly from a shady government organization and has access to weapons straight out of Area 51. Rounding out the quartet is the Spaceman, a space cowboy whose skills rely on freezing enemies.

The atmosphere is consistent, with the voice-over narration during animations and the classic sixties dramatic music tying well with the comic-book animation of the same era. There really are no sharp edges here – the Martians fall in line with the art style, as do the four different playable characters and any sort of sci-fi devices presented including rocket ships and ray guns.

Fortified! is built on the Unreal Engine 4, and with the number of explosions and tossed bodies it clearly makes good use of the physics engine. I should mention that just because an enemy goes flying does not mean it’s down for the count – and that sort of thing may be your undoing.

I don’t think there’s an element to the combat presented which the team at Clapfoot hasn’t thought about – I found no glitches, and other than one commentary I make later on, the game is solid. Enemies of varying types spawn and travel towards your base in a predetermined course. Airborne enemies will ignore barriers that ground enemies need to walk around, and as I mentioned your explosions could catapult injured enemies right to your base entirely by accident.

So it is with careful consideration that you need to buy, place, and configure your combat resources. There are ground structure weapons such as anti-air cannons, heavy mortars and anti-tank guns. Tesla coils, nitro freezers and the like mount to specific walls and blast sideways while single-use landmines of different varieties can be placed anywhere on the playing field.

Fortified! also introduces AI characters into the mix, where each person playing can have up to twelve troops at their command. The D-pad is used to instruct your followers to either defend their station, go to a particular location, rally at the base or move with you as a group. They will otherwise always engage the enemy, and while they can be beaten down, they eventually get back up.

The last resource is your character’s own weapon, of which you carry two. Each weapon, regardless of type, has two firing modes and a reload time that rivals that of loading a musket. Oddly enough, if you exhaust a weapon and switch after the reload cycle begins, it will continue reloading in the background. This gameplay choice encourages a frantic shooting mayhem that, when you don’t use it this way, is extremely frustrating as you wait precious seconds for the reload cycle to finish only to have two of your alternate fire shots deplete your ammo. It would seem that Clapfoot is encouraging weapon-switching, and having weapons automatically recharge when not selected would result in a better experience.

For each character there are up to five weapons to be unlocked, as well as twelve structures, including expendables and AI helpers. Furthermore, each weapon and structure has two alternate modes that can be accessed by spending an extra skill point. Unlock points are assigned by leveling up, but these points are not transferable between squad-mates, though you can respec (reset them) anytime and re-assign to different unlocked items.

Ultimately it means that to unlock each team member’s skills, you’ll need to grind away at levels easy enough to allow you to win, gaining only moderate experience at a time. Grind is the right word – with only two gameplay modes and a total of twelve maps for campaign and three for invasion, you’ll be playing the exact same scenarios over and over again.

The focus of the game is balancing, however, and per Clapfoot’s own description the game leans to play multiplayer. This could be a lot of fun, but due to our advanced playtime no multiplayer modes had any players to connect with. I imagine the endless wave mode could be far more entertaining with friends. Sadly there is no split-screen option, and given the game’s modest system resource demands I’m not sure why they omitted it as this could be a perfect couch co-op title.

Clapfoot has created a tower defense game unique to the Xbox One console. With a strong sense of style, AI companions and a moderate amount of shooter control, this might just scratch your strategy itch. It’s too bad then that it isn’t as accessible, and relies on repetitive gameplay with a steep difficulty to add gameplay hours to its otherwise short campaign and limited maps.

Born and raised in Winnipeg, Canada, at a young age I was forced to decide whether the harsh northern winters were going to claim my fingers, or to turn to the safer pursuits of indoor activities. Little did I know that a little game called Ninja Gaiden would bring my digits more pain than frostbite ever could. Starting with Vectrex and C64 games and moving forward through the era of electronic entertainment, I sampled as much as I could in the different platforms, and began my interest in PC gaming from wrestling with DOS memory management. While console games were a part of my earliest gaming memories and I certainly had played on most platforms including 3D0, all things Nintendo, PS1 and the like, truly the PC was my domain until the Xbox. As an old PC gamer, I ever chased the cutting edge technology. Eye of the beholder with CGA 4 colors was my first step down the the path of blowing thousands of dollars on PC upgrades over two decades. Ultima 7, with the Guardian talking to me through my monitor, still haunts my dreams and keeps me ever hoping for a decent Ultima 8 and 9. From the 3DFX SLI VooDoo2s and Aureal to today's GPU driven DirectX games, the new and shiny pictures seem to keep me going. My PC gaming has slowed down with the market shift though, and although I have choice games that will ever be on PC, I have found myself in console gaming with a bit of portable gaming in my life. Back around the turn of the millenium (and long before fatherhood), I had fired off an email offering to help Ron with a little-known site called ConsoleGold. Little did I know it would be be a part of my life to this day. While I've seen my fair share of shovelware (thanks Ron!), I manage to try and find the fun in most games. Leaning towards sandbox and action titles, I've grown to love games for their potential to reach art. Console agnostic and excited for the progress of tomorrow, I fancy the latest and greatest, but still enjoy the good old classics ... as long as they've been revamped from their 8bit graphic roots.
Related Articles: Fortified!
Share
Tweet
Share
Submit