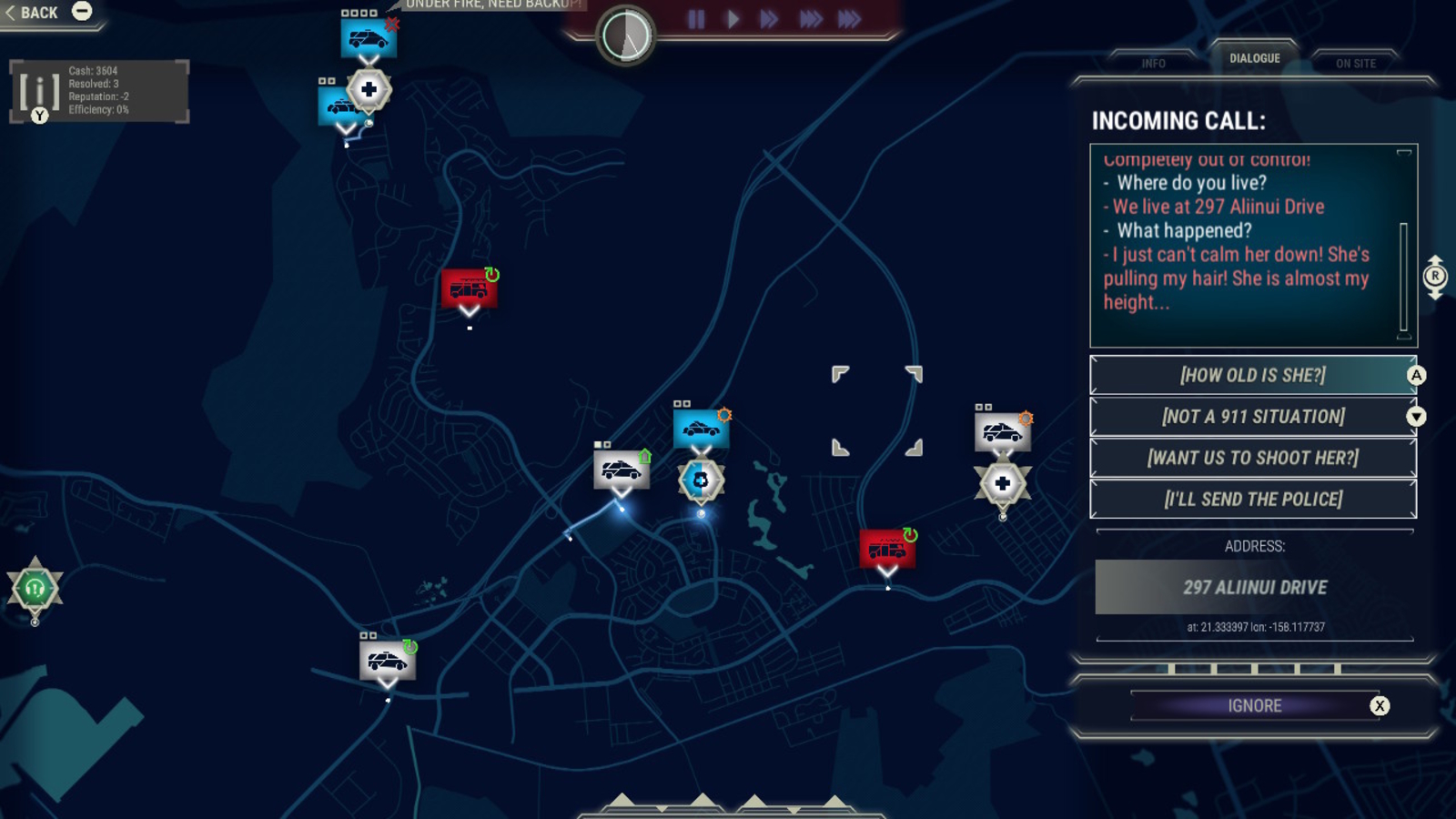 One of the most stressful jobs in the world would be managing an emergency line. That’s without a doubt. There’s a lot to juggle in the heat of the moment, and you have to act quickly or you may risk someone losing their life. 911 Operator is one of those titles that attempts to showcase what it’s like working in that position, and it does it surprisingly well. It’s straightforward, there’s no learning curve, and you’re only as good as your response time is and how you act in a given situation — kind of like the real thing, but not exactly the same.

The gameplay mechanics are not that hard to grasp, which makes it already on track to being a typical Nintendo Switch pick-up-and-play kind of title. At the beginning of each level, you’ll either buy new units, select them to spawn them in the next playthrough or upgrade them with new equipment or personnel. During a level, you’ll need to respond to 911 calls and incidents that periodically pop up on your radar. Sometimes you might get a really silly call, like when someone complains that a music event’s music is too loud and they aren’t even playing real music. If you’re like me, you’d immediately end that call. Other times you’ll get really important, interesting calls. The one that struck me was that the devs incorporated the famous 911 pizza order call, where a woman cleverly called emergency services and disguised it as a pizza order to prevent her abusive boyfriend from realising that police were dispatched. You’ll also need to pay attention, (if possible) wear headphones, and not ignore any phone call that might seem initially stupid. These might include someone initially calling because a house party is too loud, to later revealing that they saw someone under the influence of drugs entering the premises. Paying attention to any audio cues is a good and relevant feature of this game, so don’t expect you can speed through this one. 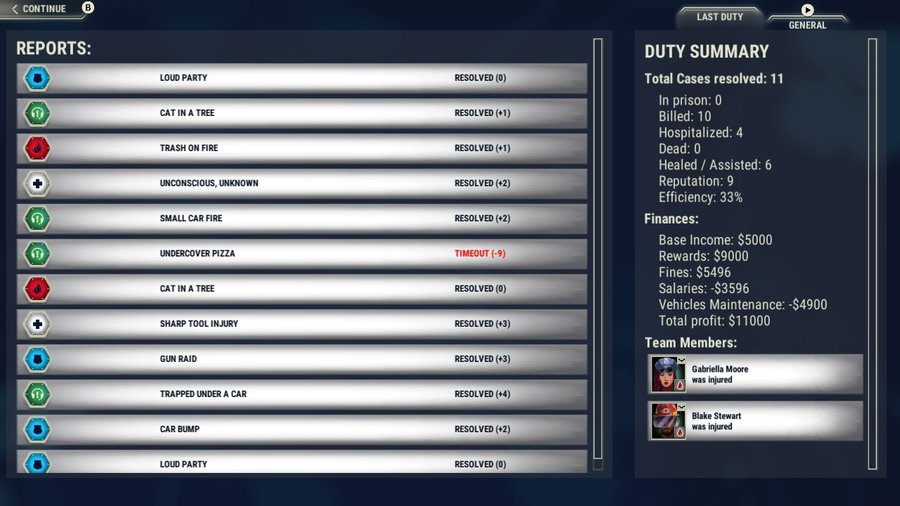 As long as you’re responding to as many calls as possible, and making a profit, you’ll get that sweet promotion.

At the end of each level, you’ll be given a rundown on how well you did. After repeated successes, you’ll eventually be promoted and moved to a new district, which is the level-up system. If you do really bad and get overwhelmed you’ll be fired and you’ll need to start that district from scratch. The thing is, it’s pretty easy to get overwhelmed. That isn’t necessarily a pro or a con since it really comes down to skill and a bit of RNG. But, since the UI is really, really bad, you might not always select the right incident to report to. At one point I had 4 incidents cluttered in the one area. Since the game snaps to the nearest incident and unit from where your cursor is located you can easily select the wrong one. At that moment, I had about three necessary incidents to respond to and one about a guy who didn’t like where someone was parked. Of course, I didn’t realise at the time but I responded to that silly one and failed to assist in preventing a bank robbery. Points deducted on that field report. On PC though, you likely wouldn’t run into that issue since you’re using a mouse.

Another issue I had with it being on the Switch was the HUD. In the console’s portable mode the text is so darn small, it’s nearly impossible to read. That’s a big no-no since that’s the main reason why people get the console. Other than that, I ran into issues like not being able to close incident pop-ups and losing vision on half of the side of my screen. At times like that, I’d easily miss one or two incidents since they were completely covered. At other times it’s really finicky. For example, if you fail to properly close a case by pressing the X button on it, and leave it on your radar til the end of the level, during the end of level field report you’ll get a “time out” point deduction. That happened quite a lot and caused me to get fired pretty quickly because either I failed to do it or the game didn’t let me close the case. An annoying situation, and a bug nonetheless. 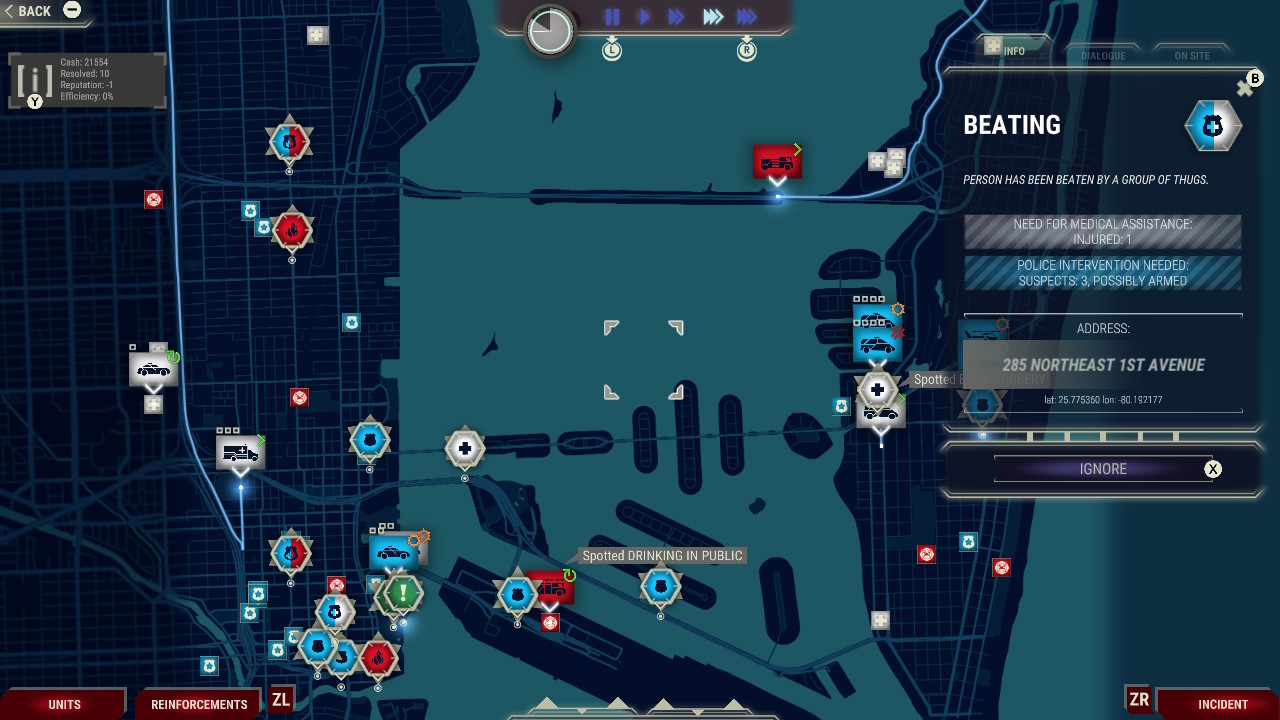 When it gets to moments like this, it gets really difficult selecting the correct incidents and units.

I also didn’t really find the game to have much purpose other than showing you what it’s kind of like working in that field. There wasn’t really an end goal, just unlocking new cities and doing the same stuff each time. It gets pretty repetitive since all you’re doing is occasionally listening to a call and responding to units. Sure, there’s unit management, but all you need to do is react quick enough and that’s it. There’s not a whole lot of gameplay really, and if you want a comparison you’re effectively playing Plague Inc. with a few added elements. So maybe it should be priced the same, instead of being $22. Seems a bit expensive for what you’re getting.

The game is just OK. The bugs get a bit annoying, and there’s not a lot of gameplay elements. The price point doesn’t seem like the right kind of value on a Switch, and if you’re looking to play it portably you’re better off getting it on your smartphone. I can’t justify that value. The game tries to showcase what you could be doing as a 911 operator, and it does that well, but eventually, it gets more tedious and repetitive than continually being interesting.

911 Operator really misses the mark. It’s a good attempt at showing what a 911 operator may do, but you’re effectively playing a mobile game on the Switch for the cost of a PC game. That $22 price point is a bit excessive, especially since various bugs and quality-of-life issues you’ll get are really frustrating to deal with on the Switch.

With a deep interest in writing, Ben followed that into a Journalism degree. As an avid lover for gaming, he is constantly expanding his library with console, PC, and VR games. He's obsessed with stealth games and loves hunting down the smallest of details inserted by devs.
Related Articles:
Share
Tweet
Share
Submit