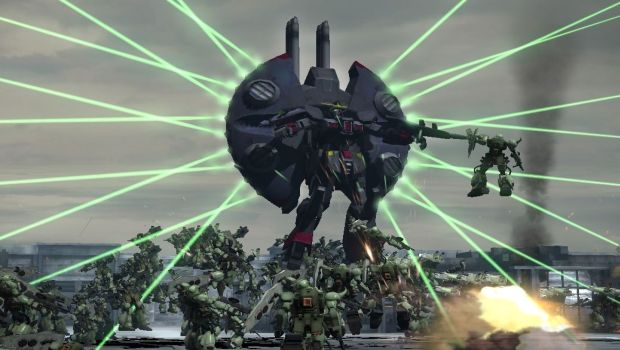 Koei’s Warriors franchise is a lot like the Hostess Cakes of videogames. Sure they aren’t particularly good and just different versions of the same thing, but when you have a taste for one just nothing else will do. Whether or not you’re a fan or a critic of the series, it would be ridiculous not to acknowledge their success. The Warriors games can easily claim over 60 titles since Dynasty Warriors’ debut nearly 20 years ago, and as long as there are historic battles to exaggerate or anime to imitate there’s no end in sight.

I for one would be happy to always have a Warriors game around to satisfy my hack and slash gaming needs, and if it’s one thing Dynasty Warriors Gundam Reborn proves, it’s that there are still plenty of places left for the series to grow.

As any fan of the Koei Warriors games will tell you, even though all the games are fundamentally the same they are also just as fundamentally different. Dynasty Warriors always feels light and fluid as you effortlessly carve your way through legions of enemy troops. Samurai Warriors also has you face torrents of enemy foot soldiers, but they are generally more hardy, less crowded together, and much more likely to get in a lucky hit and knock you off your feet. These small aspects were further refined, exchanged, and added upon as the number of Warriors titles increased and more ideas were explored. Now, with sub categories like Xtreme Legends or Strike Force, and sub-sub categories like Empires, Koei has created an ocean of subtle varieties in their otherwise cookie-cutter enterprise.

Dynasty Warriors Gundam, however, has always felt like a mixture of the above. The mobile suits you control are as varied as they are numerous, and depending on whether you play the true-to-the-anime Official modes or the lore bending Ultimate modes, they’re all available to use in just about any mission you want. Certainly you would need to be a fan of the multiple anime series referenced in order to really appreciate the finer subtleties of the games narratives and Easter eggs, but unlike other Warriors games, the fact you’re controlling giant mechs means the action is even more intense. Enemy and friendly units alike are constantly filling the screen with their exploding torsos and energy blasts, and fire rains down from the sky from distant enemy bombardments or orbital strikes. It may even prove to be a sensory overload for some, since the only time the action really tends to wane is when you boost your mech far out of the heat of the action. But filling your eyes and ears with as much beam saber overkill as possible has always been the feather in any DW Gundam game’s heavily armored cap. Where DW Gundam Reborn stands out, is in how well it does it.

Drops in frame rate, or “slow down” as shooter gamers know it better, has always been an obvious thing with Warriors games. Some consider it a tolerable flaw, and others consider it a potential exploit to see a gap in your death marches were an enemy spear or shot might make its way through. DW Gundam Reborn however just about never encountered as much as half second of mech mashing latency. Despite the choir of detonating artillery fire, Japanese battle cries, and explosive death rattles, my game continued to play swimmingly, even with a screen literally filled with enemy cannon fodder.

I wasn’t able to test this phenomenon against every combination of stage and unit (and any Warrior game veteran knows that can make a hell of a difference) but I will say that did let my unit stand and be brutalized long enough to fill as much of my vision as possible before unleashing my burst attack, and the game kept chugging along without as much as a twitch.

The smooth gameplay is emphasized with some of the best graphics the series has ever pushed out, at least as far the mobile suits are concerned. The locations, bases, and set-pieces are often still just bulky icons as opposed to carefully sculpted environments, however you will barely notice that as you’re tapping your thumb to the square-square-triangle rhythm of destruction. The rest of the DW Gundam staples are still there, such as finding item drops to boost the performance of your favorite units, leveling your pilots to create idle partnerships of man and machine, and unlocking entertaining bits starring characters who would never actually meet in the anime proper. While something new is almost always welcome in any game, at least as an option, DW Gundam Reborn continues to focus on the originals strengths and style for better or worse.

It’s consideration like these that make a Warriors game hard to judge. This far into any series there comes a point where it feels like the only way to fairly weigh a title is against its own ilk.  Just like it’s not a question of whetheryou like Batman or James Bond, but rather which version of the character do you like the best. If you’re playing or even taking a look at a Warriors game, the odds are good you know exactly what you’re looking at, and to the end, Dynasty Warriors Gundam Reborn is one of the best. Sure, it’s a mindless button masher and inbred clone of its own pedigree, but even if you never partake of it yourself, you’d miss it if it wasn’t there. Just like Hostess.. and just like the Twinkee.

Every Warriors game has marched to the sound of its own drummer, and Dynasty Warriors Gundam Reborn is no exception. It certainly is one of the best entries in the series, and it covers a larger span of the anime's timelines and alternate lore than its predecessors. But outside of its exceptional appetite for action that’s all one should expect. This game is great value for the money as long as you know what you’re buying.