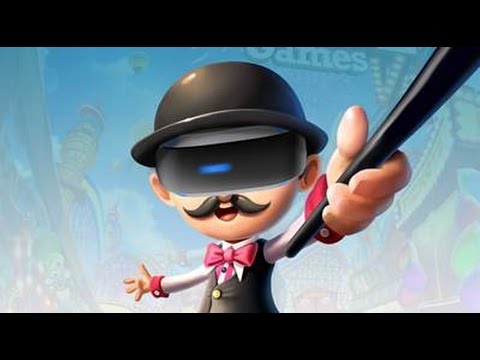 Carnival Games may feel like familiar territory, but that’s because it is. Warping in from 2007, Carnival Games VR does a bit of an update and brings its pickup-and-play experience to the PlayStation VR. Can the simple nature of carnival distractions work on the new platform?

Carnival Games VR evokes exactly what it says on the box — it’s a virtual reality version of real-world,often rigged, midway games you might find at Six Flags, the circus, or a place like Coney Island. Unlike the real deal, Carnival Games VR is fair and fun for the whole family.

The game kicks off with you standing in the midway, four different themed areas arranged before you, three of which are locked. Entering the western themed area, Cowpoke Corral, I had a shooting gallery and a baseball throwing game ahead of me, with one more themed game to unlock. Knocking down a single milk jug is enough to earn five tickets, but doing well nabs you 25. 50 tickets is all that is required to unlock the third game in the area — a theme that persists throughout the other three thematic areas. Unlocking new areas takes almost zero effort. So little, in fact, that you almost wonder why developer Cat Daddy Games even bothered in the first place.

Graphically, Carnival Games VR is not going to knock your socks off. With a heavily stylized cutesy look, the characters look like they were ported straight from the Wii version. The people walking around look like they were ran through a randomizer, with some of them being short and others being over ten feet tall, and all of them dressed in nonsensical garb. All of that aside, let’s talk about the real stars — the games themselves.

There are a dozen games on offer, falling into a fairly predictable pattern you might find on a midway. The shooting gallery gives larger point multipliers if you are precise, but it’s fun to just hammer away at the dual popguns, flinging ammunition all around the screen. Throwing oversized softballs at milk jugs is far more fun than I thought, though the motion is more of a soft lob than a real-world pitch. But then there’s Skeeball.

Skeeball in Carnival Games VR is almost worth the price of admission on its own. Virtual Skeeball, Futurama episode aside, is almost as fun as its real-world counterpart. The motion controls in Carnival Games VR are perfectly mapped, translating easy rolls and overly hard throws into on-screen action. It’s hard to overstate just how much fun it really is — I think I whittled away an hour at it the first time I played.

Heading back to the midway, my next unlocked land is the Wizard’s Walkway. Here, I found dart throwing, a climbing wall, and the ring toss. Dart throwing has several balloons you can hit, with a moving bullseye popping the whole batch. Ring toss, on the other hand feels just as rigged as the real thing, but that’s part of the fun, I suppose. The climbing wall is a timed scale to the top of a castle to retrieve a crown using ropes, handholds, and a few chains to round things out. It’s a neat experience, if not traditionally a game per se.

Shark Tank is actually a dunk tank (though it does have a shark in it) where you throw baseballs at an ever-shrinking target. After three successful hits, the target begins to move up and down (as well as shrink), making it that much more difficult.

Funnel Cake Stacker gives you a plate for each hand, as a nearby castle lobs funnel cakes (that look more like pizza pies) at you. Your job is to catch them, stacking them as high as possible for points. Of all of the games available, this was the easiest, my first attempt blowing away the 3-star score by a wide margin. As higher star ratings earn you additional tickets, obviously more is better.

Haunted House is a slow rollercoaster ride where ghouls and ghosts with bullseye targets on their sides, not unlike the shooting gallery. Once again, popping off shots as fast as you can click the triggers ends up being more fun than being precise and earning bonuses.

Sports Station is where you’ll find the games that are normally the most rigged in the real world. Down the Stretch is the ball-rolling game that simulates a Kentucky Derby race, with the more balls sunk leading to a faster run time. This one doesn’t feel rigged, it’s just challenging to hit the hole that is lit at the right time.

Fast Pitch is what it sounds like, having the player try to catch incoming softballs at progressively more difficult angles. They start as slow tosses, then eventually curves, and corkscrew and other crazy pitches. It gets downright difficult, but it’s all about timing and practice — just like the real thing.

Swish, the final game in Sports Station, is a basketball tossing game. You simply throw balls as fast as you can, trying to get as many balls into the hoop as you can. Perhaps I suck at basketball, but this felt like the real-world equivalent of over-inflated balls and rings that are slightly too small. Either way, it was a fan favorite at a recent party.

All four thematic areas are quite a bit of fun, with Skeeball, the Haunted House, and Shooting Gallery being some of my personal favorites.

I do have to admit that there was one area that was a touch annoying — voice repetition and overlap. There is a very limited number of phrases the carnival barker will say, and he will say them a lot. Sometimes he’ll even speak over himself to repeat a different phrase. I made use of the ability to turn off voices completely.

Behold all the stuff you can collect!

If there’s one area that I wish was a little more polished, it’s the multiplayer. There is no method to set up a game for multiple people to play. While Carnival Games VR isn’t billed as a party game, some of the games lend themselves to it nicely. If online billiards can make online VR a possibility, then it could easily work here. Perhaps in Carnival Games VR 2 we can make that a reality.

Carnival Games VR is an unexpected hit in my house. The intuitive control scheme made it fun for gamers and non-gamers alike. While having multiple players was cumbersome, there is a nausea-free simple and enjoyable VR experience.

Ron Burke is the Editor in Chief for Gaming Trend. Currently living in Fort Worth, Texas, Ron is an old-school gamer who enjoys CRPGs, action/adventure, platformers, music games, and has recently gotten into tabletop gaming. Ron is also a fourth degree black belt, with a Master's rank in Matsumura Seito Shōrin-ryū, Moo Duk Kwan Tang Soo Do, Universal Tang Soo Do Alliance, and International Tang Soo Do Federation. He also holds ranks in several other styles in his search to be a well-rounded fighter. Ron has been married to Gaming Trend Editor, Laura Burke, for 21 years. They have three dogs - Pazuzu (Irish Terrier), Atë, and Calliope (both Australian Kelpie/Pit Bull mixes).
Related Articles: Carnival Games VR
Share
Tweet
Share
Submit