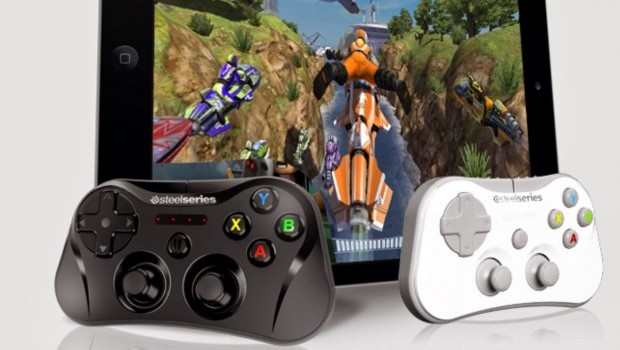 iOS controllers haven’t exactly had the best run of luck lately. Whether they’re too damn expensive, or just plain not up to snuff, it’s been hard for hardcore gamers to find a controller solution that will let them play console-quality titles on their iPhone or iPad. Steelseries has attempted to solve at least one of those problems with the Stratus, and while it’s definitely costs more than it probably should, it’s likely one of the best controllers you’ll find for Apple’s popular platforms.

At first glance, the Stratus is an unassuming piece of hardware at only 2.4 inches by 4.3 inches. It’s incredibly tiny and lightweight, and when I first picked it up, I didn’t know how I would feel after extended playtimes with my big, meaty claws clutching that minute chunk of plastic. But after playing a few missions in Grand Theft Auto: San Andreas, delving into the deep combat of Bastion, or exploring the vibrant world of Oceanhorn for several hours, the Stratus still felt comfortable, almost disappearing into my hands.

I say almost, because while the device is easy to set up and connect to any iOS device via Bluetooth, the button quality isn’t exactly perfect. The overall build quality of the controller is solid, but the buttons aren’t exactly built for rapidity – this isn’t a problem with most iOS games, as they’re not quite designed for that level of twitch precision, but it’s definitely noticeable. The analog sticks are also a bit squishy and imprecise, and while they’re definitely a better solution than a virtual D-Pad, they lack the accuracy of their console peers. The shoulder buttons themselves are a bit too compact, with two buttons per side – one of them a long, thin rectangle above a larger, more traditional trigger. Driving around San Andreas took some getting used too, but after a while, they felt capable of handling most games I could throw at it.

So, the Stratus is good but not great – a solid solution for players looking for something to play their more traditionally-minded games on a touch-only device. This is fine and all, until you discover the asking price – this thing retails for $79.99. That’s more than any of the next-gen consoles’ controllers, and those are hefty, fully-featured pieces of tech. No doubt that the cost has something to do with licensing Apple’s proprietary technology, but it’s a shame that it means passing that cost onto the consumer, especially when it means a lower-quality experience.

Plus, as of this writing, there are only around 150 games or so that actually make use of the controller – with maybe a fraction of that actually worth using the Stratus on. Games like Metal Slug 3 and Sonic CD are worth whipping it out for some more precise controls, but games like Leo’s Fortune can be controlled perfectly fine without it. And while San Andreas takes advantage of the benefits of the Stratus, Vice City and GTA III don’t – unless the support has been specifically added to the game, the Stratus won’t be able to do anything with it.

So ultimately, it comes down to whether or not it’s worth spending $80 to play a handful of mobile games with a decent but not quite perfect controller. If it were cheaper, this would be a no brainer – it’s not perfect, but it gets the job done admirably, and its small size makes it incredibly portable. But you have to be willing to pay the price of admission.

It may not be the ultimate solution for iOS gamers looking for more precise controls on their mobile games, but it’s certainly more than capable at handling the games it’s compatible with – if you can stomach that bloated price tag.