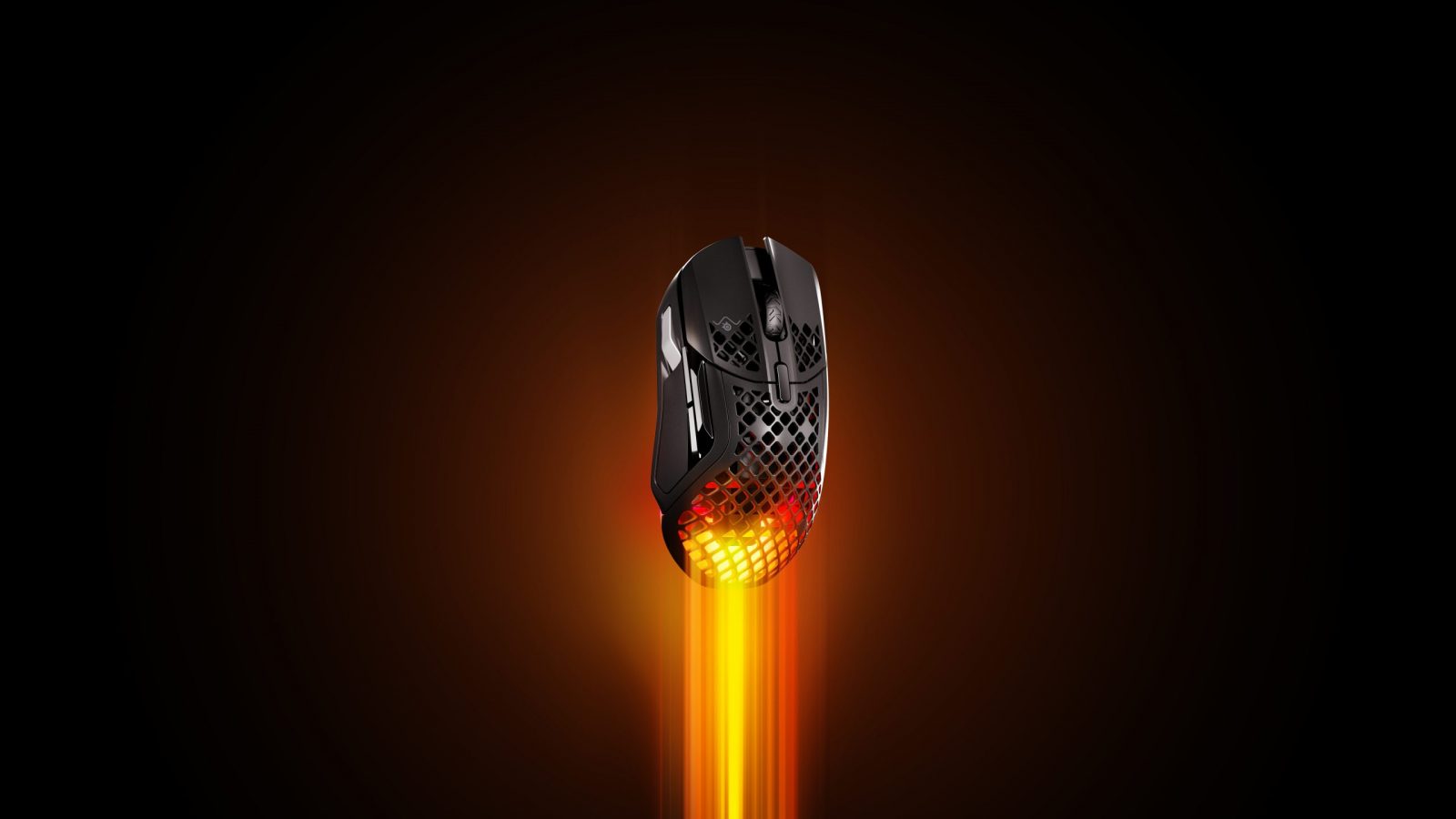 I’m a controller guy at heart, but that doesn’t mean I don’t need a gaming mouse with my computer. Even if I’m pulling out the Xbox Elite Series 2 to play some Call Of Duty, a good mouse is necessary for at least navigating your PC, as well as being the better option for playing certain genres like point and click or RTS. I’ve done a couple of mouse reviews for Gaming Trend, and while I’ve liked plenty of them I’ve always wanted one of Steelseries’ Aerox mice. They’ve always looked cool and I like the brand, so when I found out the new Aerox 5 and 9 were releasing (announced today), I just had to get my hands on them.

So, let’s jump into the box for the Aerox 5 shall we? All and all, there’s not a lot you need to get going with this one, and not a lot included inside the box. There’s the gorgeous Aerox 5, the USB-C 2.4mhz wireless dongle, an extension adapter, and a USB-C data/charging cable. If you’re surprised that’s it, don’t be – you don’t need much more to get a gaming mouse ready to rock.

Getting this thing out and setting it up was also super easy… barely an inconvenience (yeah I’m watching too much Pitch Meeting). It’s plug and play; you plug your USB-C cable into the PC and mouse if you’re running wired, or connect via the dongle or Bluetooth to go wireless. I absolutely love the versatility of the Aerox 5, but here enlies something I’ve found with this mouse I don’t care for – the USB-C dongle. I don’t mind at all switching things up and I’m sure there are benefits to the change, but I don’t like having to use my only USB-C connection for it. You can make it work out of the box – the charge cable can connect into the adapter and the dongle into that so you can use a USB-A port – but that leaves me with a long cable hanging behind my desktop with a heavy enough adapter and dongle pulling at it. Even more, this means if I need to charge the Aerox 5 I need to either get another cable out or disconnect the adapter and dongle. It’s just not my personal preference, but I imagine I’m not the only one here. 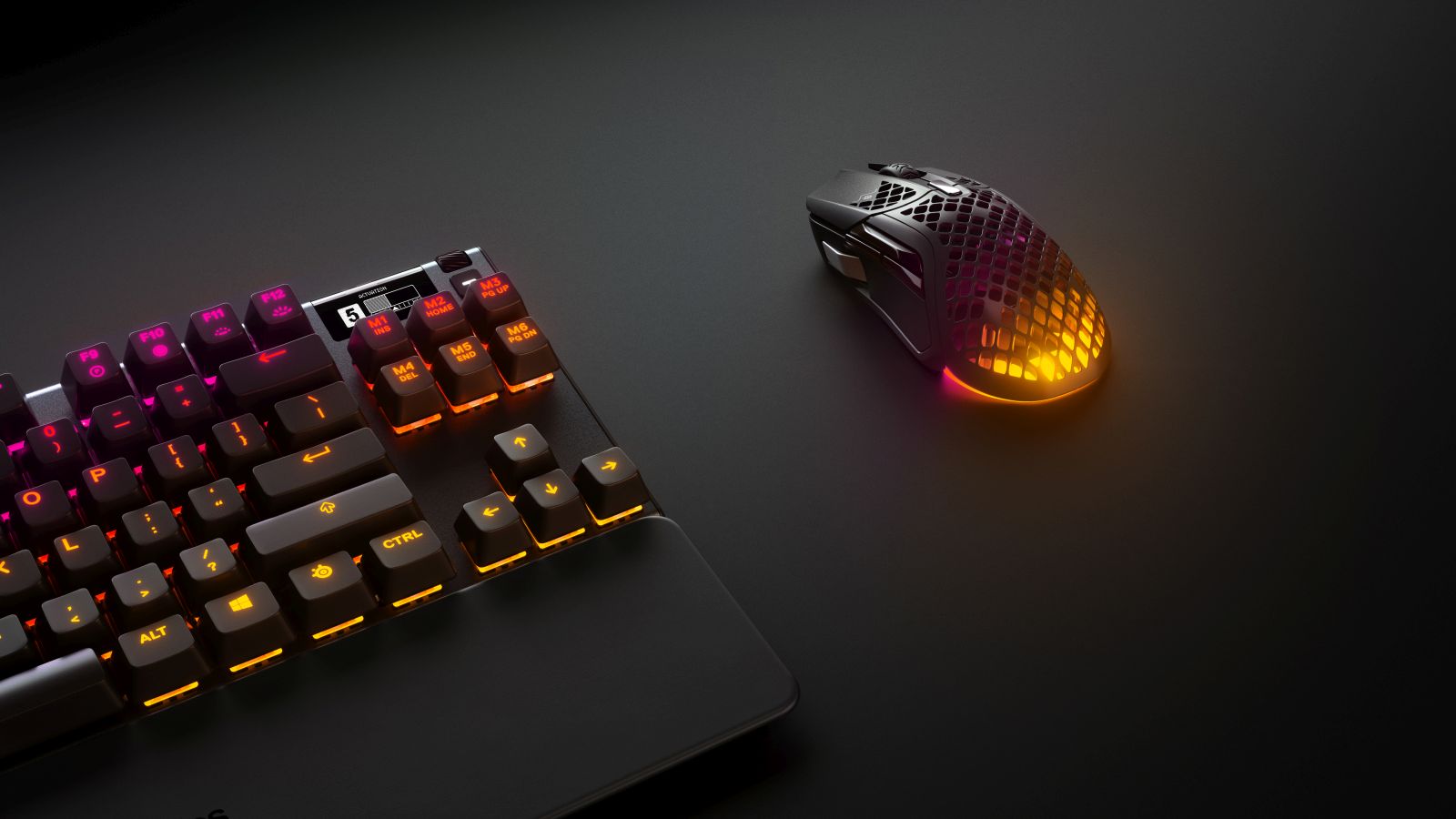 Moving on to the mouse itself, this thing is super sexy. I love the black matte color, the extremely comfortable shape, the feel of it; it’s just an awesome mouse. Form isn’t better than function here either, as this thing boasts plenty of features. It has a sensitivity range up to 18,000 CPI, a max speed of 400 IPS, on-board memory, aquabarrier IP54 protection, 9 different buttons, and a 80 million click switch rating. That’s a whole lot of numbers and terminology, but it’s a reminder of how much Steelseries has packed into this little thing. “Little thing” is true as well, weighing in at only 74 grams (without the cable). It’s a bit heavier than some other mice I’ve used and reviewed, but it doesn’t feel much heavier than the 60 gram one I was using previously. It might be that this one is a little taller, some extra material and buttons lending to the extra weight, but it still glides around wonderfully. Speaking of gliding around, the virgin grade PTFE skates are the best I’ve used on almost any gaming mouse, allowing it to move around like an Olympic ice skater.

The comfort in the design is two fold: the honeycomb shell and the clicky right and left mouse buttons. For those who don’t know what I mean by honeycomb, to lessen the weight of your mouse the shell has a honeycomb pattern of holes, which looks cool and does its job in lightening the load. The only thing that I’ve noticed on the Aerox 5 is the matte finish chosen along with the honeycomb shell can sometimes lead to it feeling a bit slippery. That could be my not having worn it in much yet as well, and I’m willing to chalk it up to that. Continuing with the comfort part, the clicky mouse triggers/buttons have impressed me to no end. They fall perfectly between having that resistance you want in a click, but having that hair trigger quality for those quick on the draw. If I was building the blueprint for the perfect mouse, these triggers/buttons would be at the top of the list.

This mouse does have more buttons available than just the right and left ones, even more than some gaming mice I’ve owned. There’s your wheel (of course), which has its rubber grip and pattern down to give you the best feel, the CPI button, along with four buttons on your left side, which are pretty accessible besides the silver button under the left trigger. It could be my smaller hands talking, but my thumb has a tough time hitting that one, although there is a comfortable groove towards the back of the button to help people afflicted such as myself. One of the other buttons that isn’t as familiar is a switch-like one sitting above the “go back/go forward” buttons. This one is unique because it doesn’t click down but side to side so you get an extra button out of it. The cool thing is all of these can be reassigned via the Steelseries app to get maximum value in the games you play. For the gamer who needs to map as many additional commands to their mouse as possible, this setup is super nice. 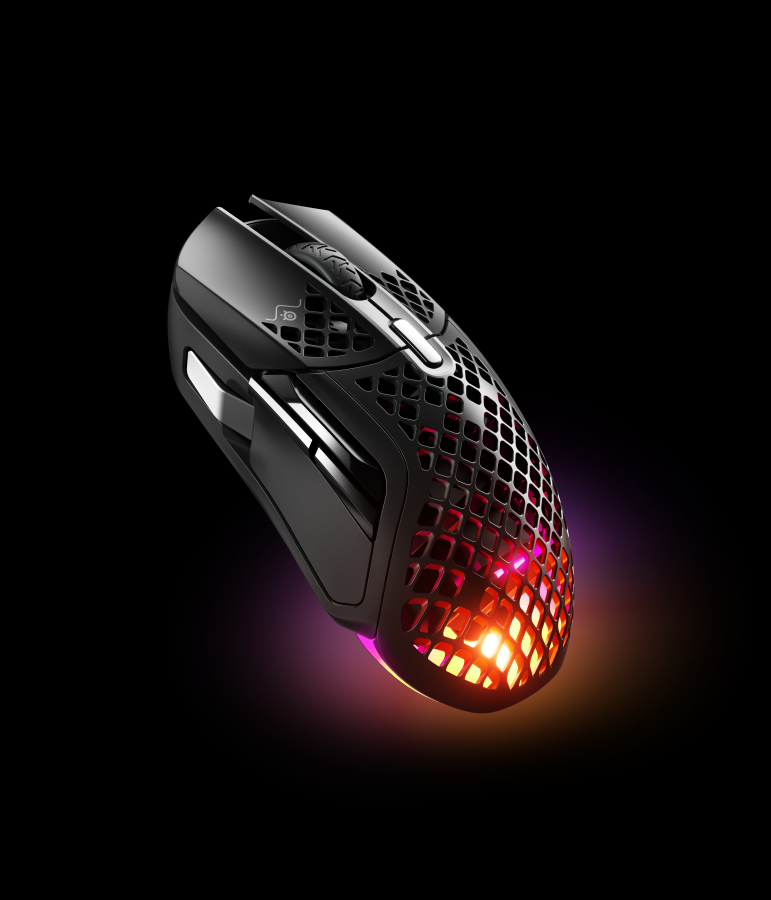 As for looks, I’ve already talked about how nice the aesthetics of the Aerox 5 are, and the RGB included is another nice touch that adds to the beauty of this one. It all resides underneath the mouse, with it being most visible at the back through the honeycomb shell. This does mean it disappears beneath your palm when in use, but some very nice features from Steelseries own GG software makes it work beautifully. The Steelseries GG software is awesome in and of itself (we talked about how much we love it and Sonar in our Arctis 7P+ review), and what it does for the RGB in the app is great. As soon as the sensor picks up you using the mouse, it can shut off the RGB, protecting your battery life, which is much more important than the bottom of your palm covering up pretty lights. Beyond that, there aren’t many options for spicing up the color changes, but a mouse definitely has less surface area and lighting to provide than a keyboard, so that’s okay. I like my breathing colors anyway.

I mentioned the settings allowing your battery life to be protected from RGB, but with the Aerox 5’s hoss of a battery it may not matter much to you. This one boasts a 180+ hour battery life, meaning you should be able to go through an entire week before needing to charge it. Like the Arctis 7P+ headset before it, I haven’t had these long enough to be able to tell you if they live up to that advertisement, but I am a little concerned given I had the Aerox at 100% earlier and it’s already down to 80% halfway through the day. Now, my guess is the battery is talking about the life expectancy without my blaring the RGB features (which I have all the way up), so that’s fine given the toll I know RGB will take on them. It’s actually pretty impressive that I should get roughly 2 ½ days of charge even doing everything possible to drag the battery down. You can also get upwards of 40 hours via a quick 15 minute charge, proving the USB-C charging port to once again be the king of the space. 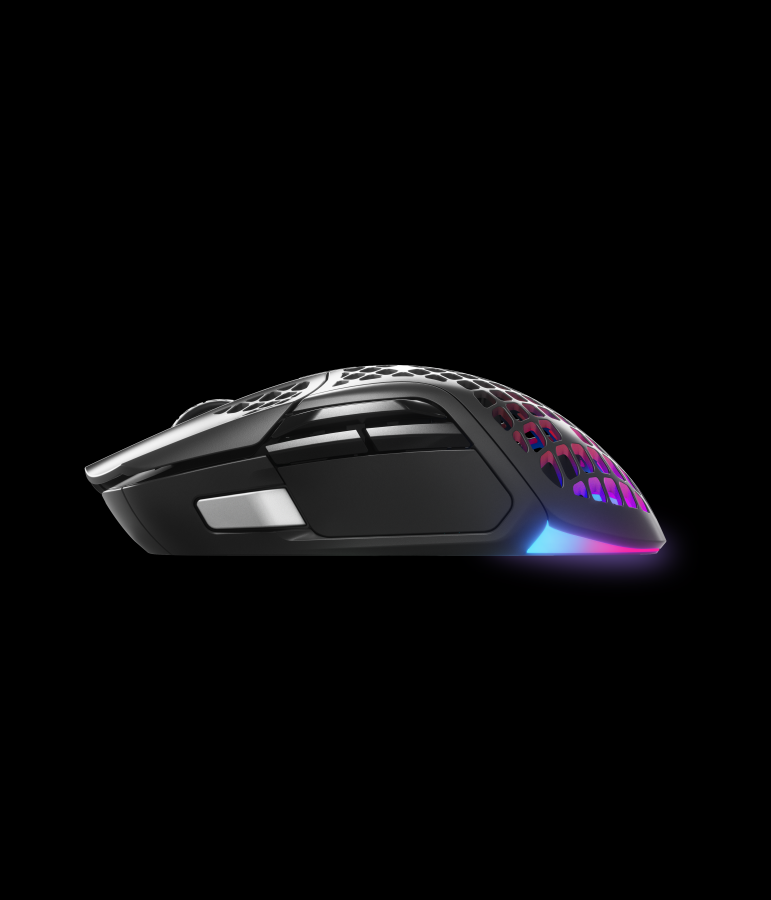 We’ve been at this review from plenty of different angles, so I’m sure you want to know how well this bad boy performs. That’s why ya came here right? Well, beyond my own having to get used to the differing feel and speed compared to my last one, it performs admirably. I have to say, it’s still not in my comfort zone given my proficiency with controllers, but I can see why people enjoy using a mouse. The quick twitch ability to spin almost completely around and beam someone with your weapon is appreciated, and the precision at which you can aim (if you’re better than me that is) is always good. What’s even more insane is I’m playing on a low 3200 CPI, and you can jump up to 18k, meaning there’s plenty of wiggle room for people who can handle it. In any case, I never missed once because of the TrueMove Air sensor.

Additionally, while I didn’t map a ton of buttons while I played a few matches of Call Of Duty, I can see how this could open up your arsenal. Things like crouching without having to stretch a finger to C, throwing grenades or switching weapons without moving from WASD, all benefits of the extra buttons at your… well, thumb tip. I use my Elite Series 2 for the same purpose, being able to use back buttons and keep myself aiming, and the Aerox 5 keeps you in the zone in the same way, although it’s more about movement than aiming.

Now, we all want the best in whatever device we buy, and I’m all too familiar with the quote: “You get what you pay for”. With the Aerox 5 Wireless you’re paying for some great features, and that price comes out to $140 bucks. Maybe it’s the extra buttons, but it begs the question why there was a $40 increase from the Aerox 3 Wireless since some of the features are nearly identical. Steelseries could just be finally charging what this mouse is worth, and that’s okay, given we are living in a time where everything is getting more expensive, and its competitor the G502 Light Speed is behind it in several ways and is $10 more. It just might be tougher for some budget owners to relinquish their Aerox 3 Wireless for a pricey upgrade. 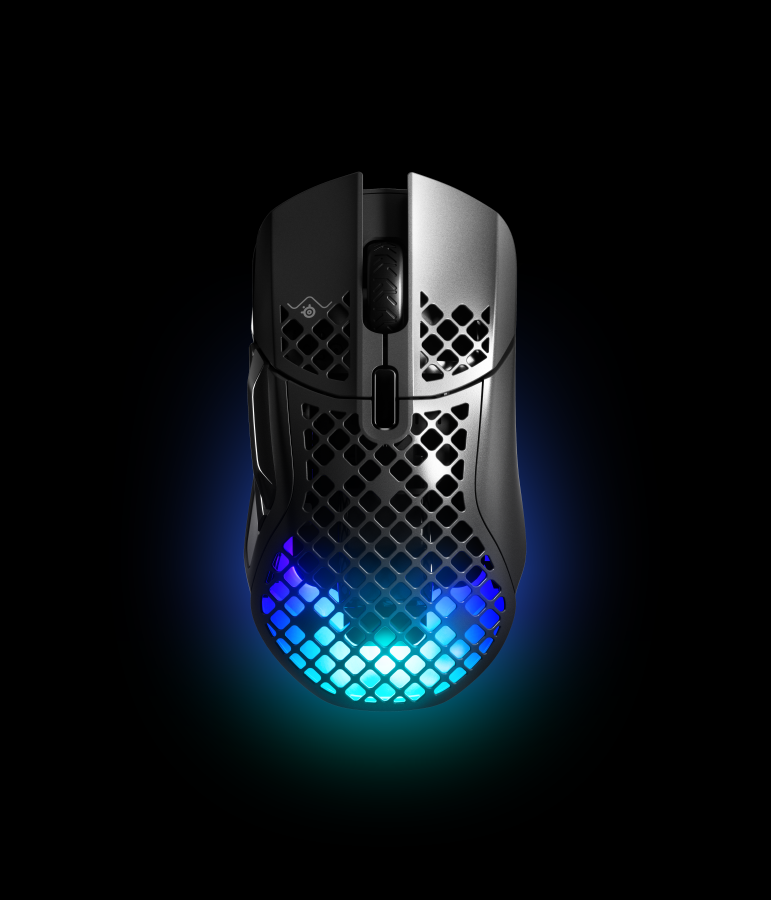 To finish this one up, my only other take away from a fantastic gaming mouse is the disappointment that has to exist in the lefty gamers camp. I myself am very right-handed, but I can’t imagine what it would be like to be press and get this to find out it’s not built for me. Worse still, I don’t see anything in my press kit that infers the existence of a left-handed or ambidextrous model. I know right-handers dominate the space and the population, but it’s a real bummer that a mouse this great can’t be enjoyed by all. Hopefully that will be corrected soon.

The Steelseries Aerox 5 Wireless gaming mouse is available as of this very posting, and you can buy it for $139.99 from Steelseries.com or at most electronics stores. To check in on its brother, the Aerox 9 Wireless MOBA and MMO gaming mouse, click the link for our review here.

The Steelseries Aerox 5 Wireless gaming mouse is a fantastic device, and one of the best gaming mice you can own. It’s not only a looker with a sleek honeycomb shell, but it performs as well, with an array of buttons to map out to your pleasure, great sensors guiding your cursor, and some of the best clicking right and left buttons I’ve ever touched. The wireless dongle kind of stinks, but that’s a drop in the bucket compared to how awesome this gaming mouse performs.

David Burdette is a gamer/writer/content creator from TN and Lead Editor for Gaming Trend. He loves Playstation, Star Wars, Marvel, and many other fandoms. He also plays way too much Call Of Duty. You can chat with him on Twitter @SplitEnd89.
Related Articles: Steelseries Aerox 5 Wireless
Share
Tweet
Share
Submit