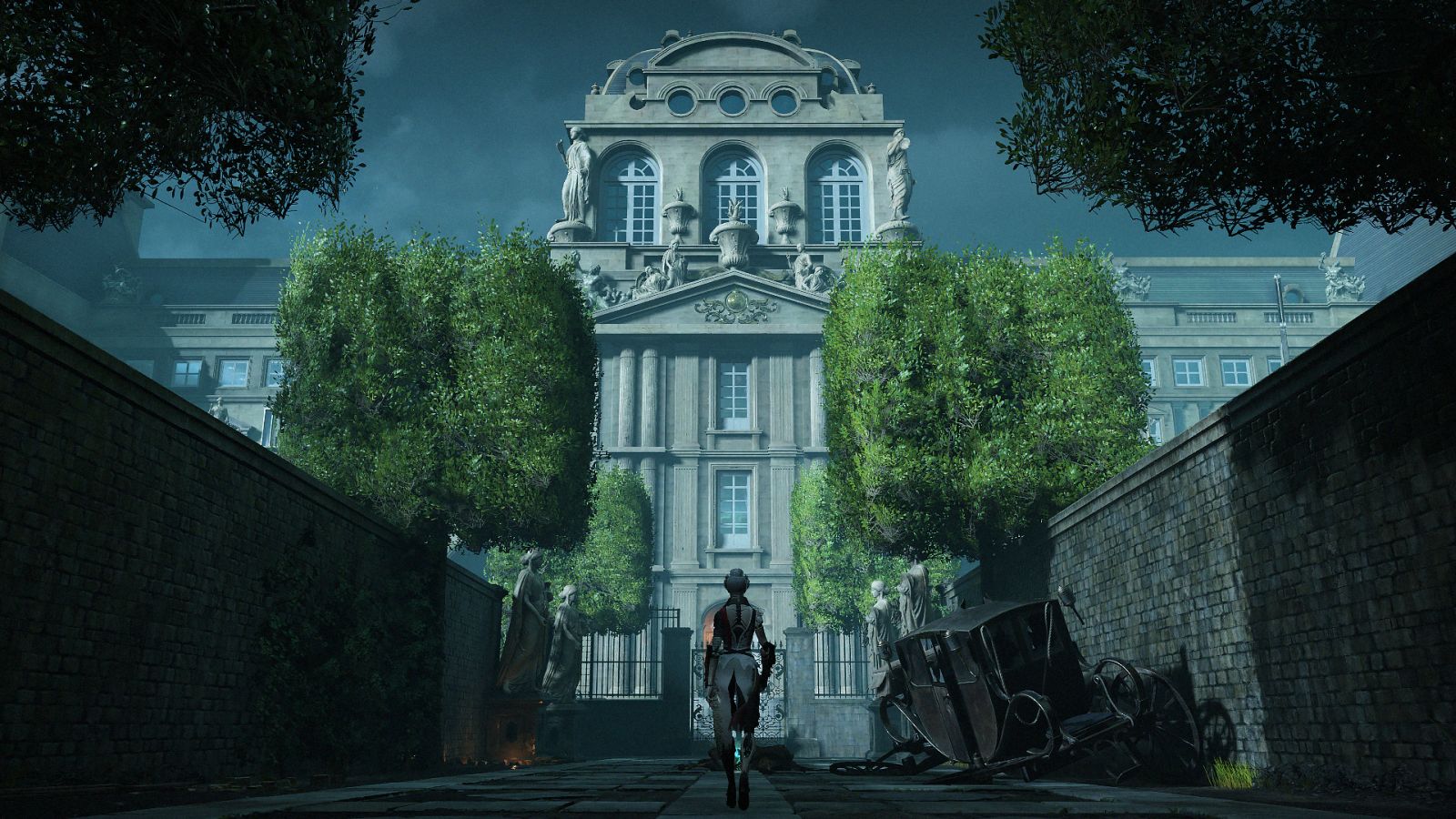 While it took a moment for them to do so, developer Spiders finally captured my attention when they released Greedfall. That was one of my most underrated titles in 2019, and it’s still one I can go back to after the PS5 upgrade. The reason it grabbed me? A captivating and original setting, taking a colonial world and injecting some intriguing fantasy and astonishing creatures into it. Sure, there was plenty of what the kids call “euro-jank” to it, and some of the repetition (especially the same throne room in each leader location) could get old, but it was fun to play with a riveting narrative and environment.

Now we come to the latest game from Spiders, Steelrising. The team has yet again outdone themselves in finding an original setting and premise, but I was surprised by my first experience with the game. When trying out Steelrising in a closed test, I was somewhat taken aback to find out it was a Soulslike game, punishing your missteps and rewarding your patient observations. Could I possibly connect with this one given my low enthusiasm for Soulslikes?

We’ll get there in a moment, but let’s start from the beginning. You play as Aegis, a dancer automat (steampunk robot), in the queen’s court. For some reason you’re protecting her, and for some reason you can also speak and sense, along with having a bit of free will. Aegis does have one overriding directive though: obey whatever the queen commands. That comes into play almost right away, with Her Majesty fearing what the king has planned (by his deadly automat army) in the middle of a revolution. She tells you to find your creator, the creator of all the automats, Monsieur de Vaucanson, and convince him to undo what he has done for the king. Being the loyal bodyguard you are, it’s right into the fray for you, heading into an alternate history take of French Revolution Paris.

This is where Steelrising is at its strongest, with Spiders again hitting on a phenomenal setting. Where Greedfall was a journey into the new world, adventuring through forests and fields, Steelrising takes you down bloody cobblestone streets, strewn with broken bodies and cracked machinery. It’s so different in so many ways than its predecessor, yet possesses the same soul that Greedfall does. I’ve thrown out “it feels alive” in several recent reviews, and Steelrising meets that assessment, which is funny given its subject matter.

Paris is a beautiful city, but unfortunately there won’t be any fighting at the Eiffel Tower. That would be because it wasn’t constructed until 1887. Don’t be too sad, though. You’ll get to enjoy at least one big landmark by going through sections of the Louvre, the famous art museum. Most of the game is stunning, with some great places to explore (especially Versailles) that can make you forget this is a AA game. Spiders is certainly punching above their weight here. 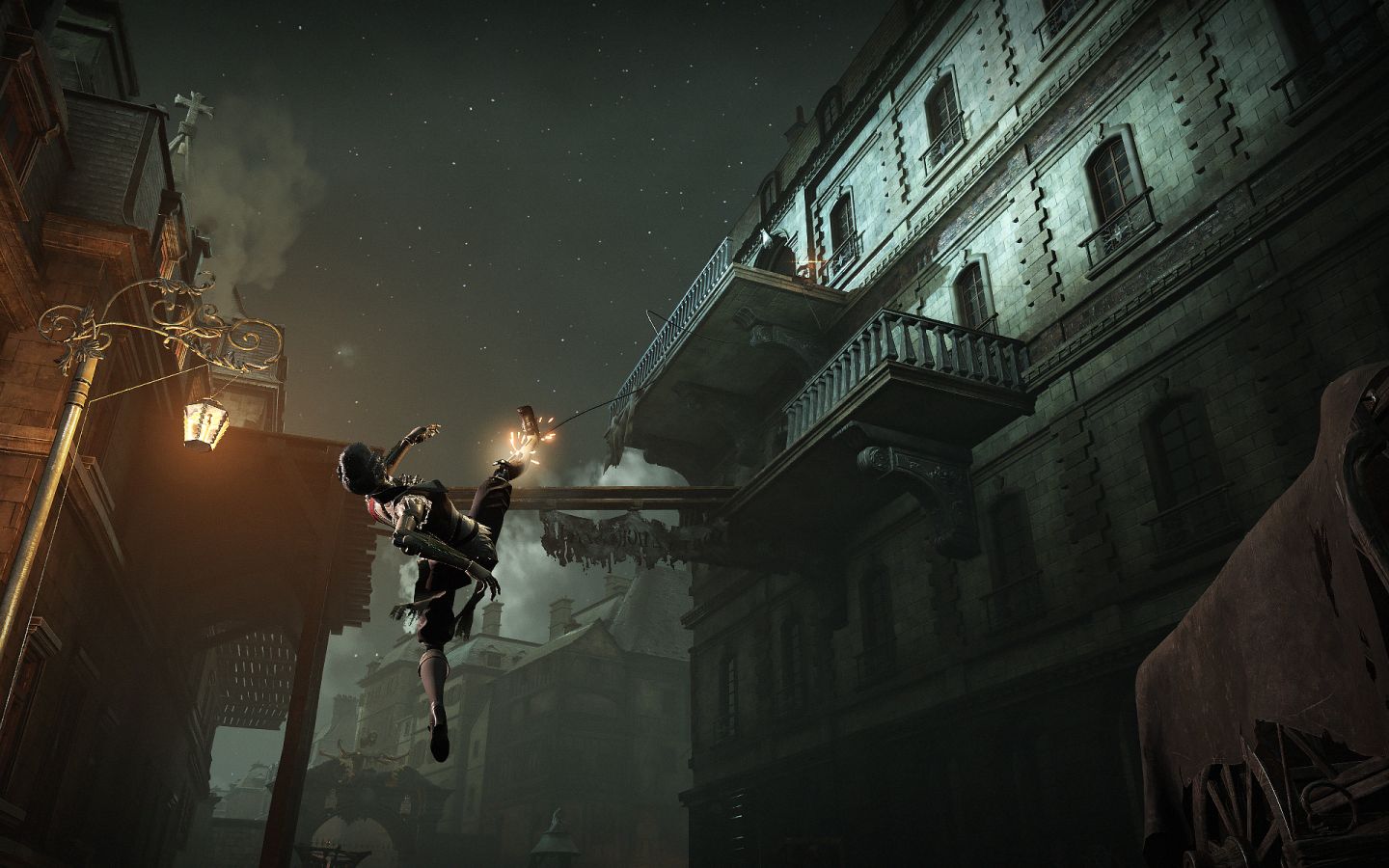 The only areas I wasn’t thrilled with were the darker/night ones. They’re still pretty cool to look at and fun to traverse, but without a map to go by, you tend to get stuck at some places. Not to mention, some of the colors are so drab that they can make it easy for a hidden enemy to smack you in the back of the head. You can even miss what’s in front of you due to the lack of lighting.

The story weaves itself into the setting with something much larger than you generally get in Soulslikes. The Dark Souls games have never been known for the narrative, sacrificing a traditional story in favor of hunting for lore. There are many who enjoy that, and some who prefer it, but it’s not really for me. In Steelrising, everything follows a more traditional action/adventure game structure, with main missions you follow. There are even plenty of cutscenes and side missions that lead to decisions you’ll make that influence the ending.

Shockingly, you even get a lot of character development through freeing several side characters during your main mission. Liberating these humans isn’t easy, given the echoes (personal effects they’ve dropped) you must find to set them free after the main boss fights can be hidden, and backtracking to find them can be a pain. That being said, it’s completely worth it, with each one I’ve managed to help adding a lot to the story through corresponding side missions. Although they certainly don’t add to the prettiness of the game with their weird looking character models and questionable facial animations. 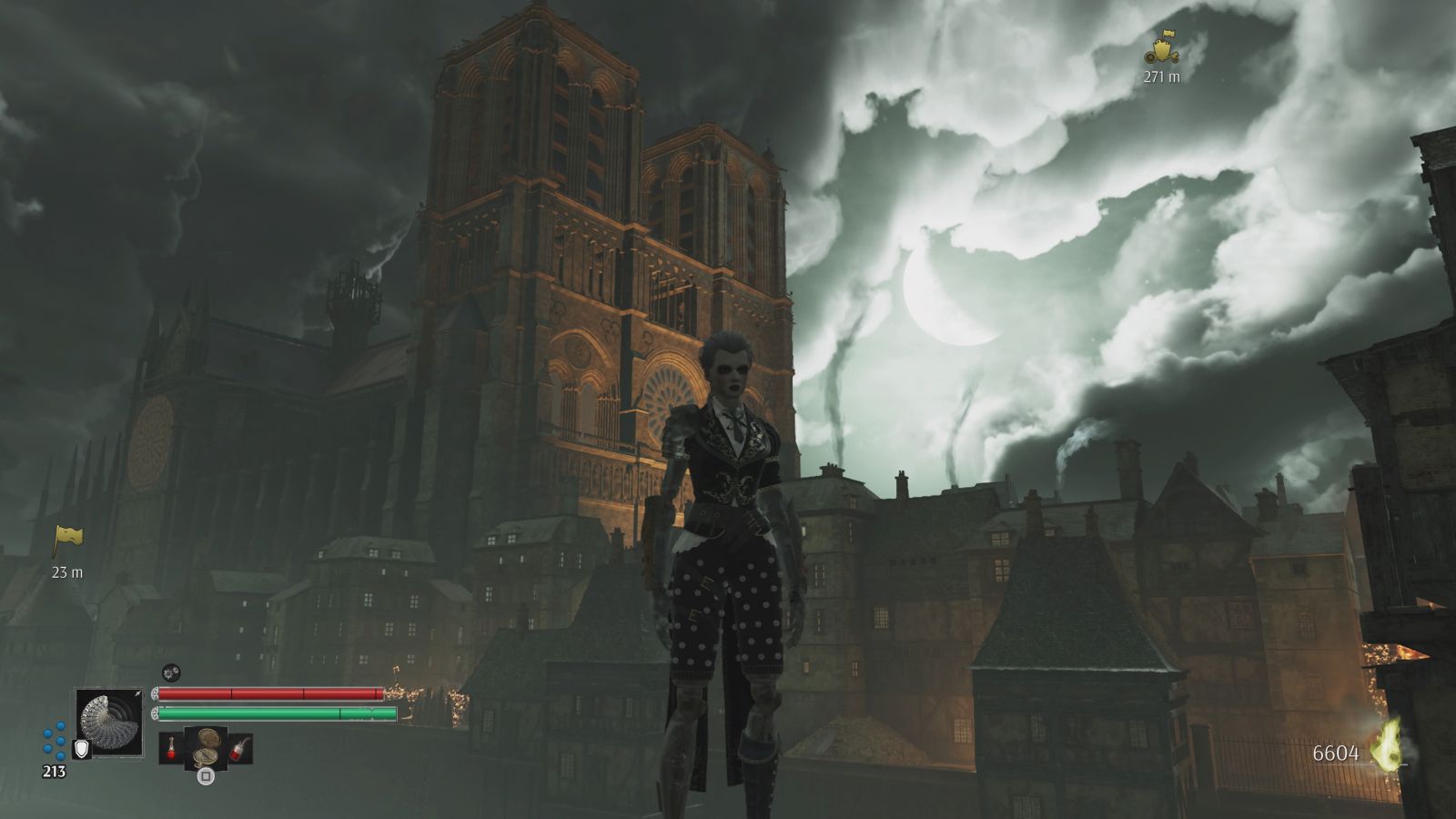 No spoilers here, but Aegis herself even gets some moments to shine, with her background being fully realized at the end of the game in a beautiful reveal. It’s all tied together so well, you’d almost forget you were in a Soulslike if not for the backbreaking combat interactions. There is even a journal and markers on your HUD, making it easy to track where you need to go next, which isn’t the usual for something Soulsy.

Where the game doesn’t stray from the formula is definitely in the combat, and here you’ll have to play just like you would a Souls game. The only thing different, and maybe it’s just me, is how the combat leans closer to a less restrictive action game with your attacks, and even adds a bit more to the aerial attacks than you’ll find elsewhere. Aegis flitters around the arena, and although you have to keep an eye on your stamina, you can take advantage of her quicker movement to punish your foes. Even so, the enemies you’ll face pack a punch, so being patient and waiting for your chance to hit back is going to be the play. The good news is the game performance is very slick, with the performance mode on PS5 sticking to 60fps with very few drops. Overall, Steelrising is largely devoid of “euro-jank”, being one of the smoothest experiences we’ve gotten from Spiders. Given the Soulslike design, it’s certainly appreciated. 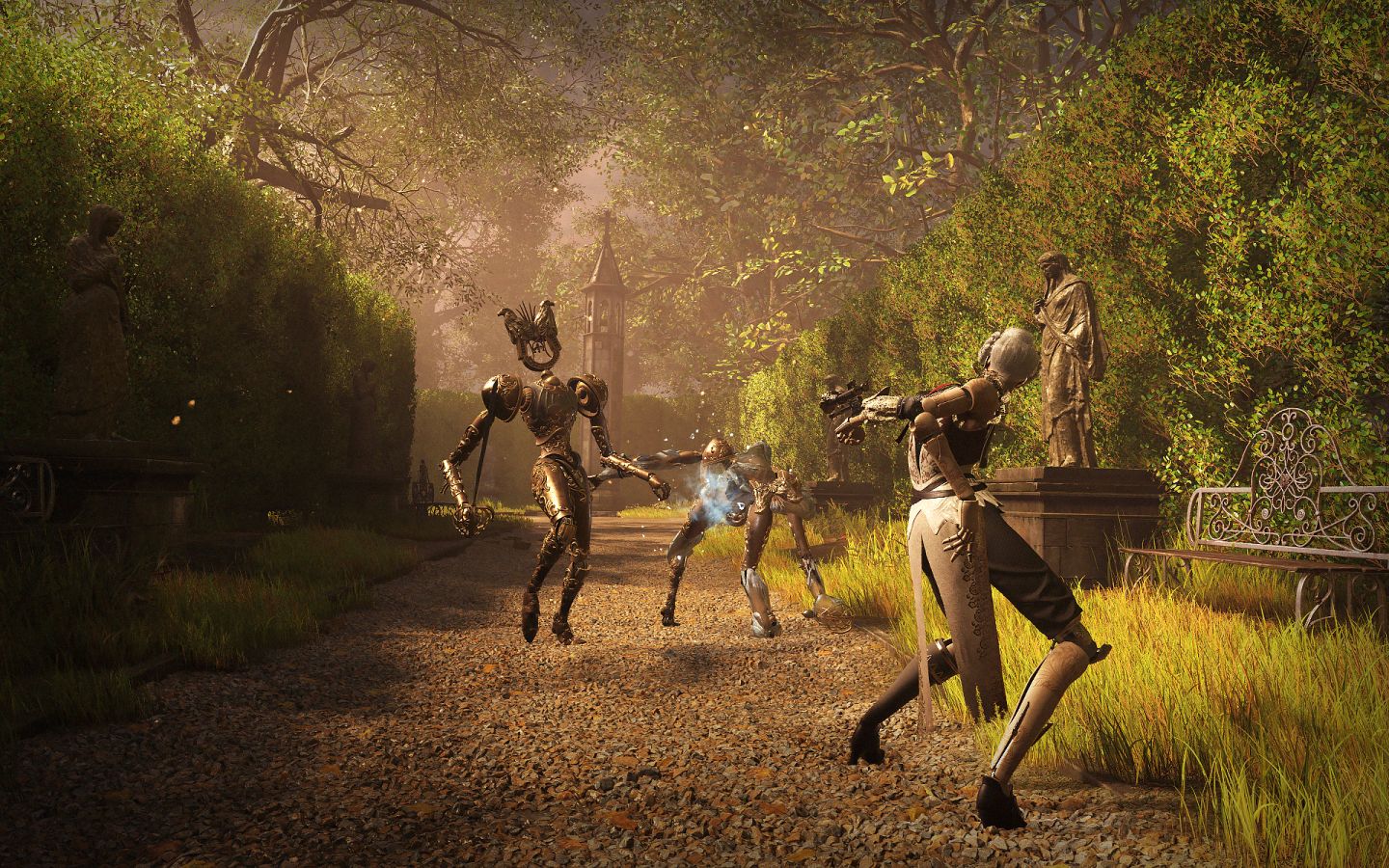 The enemies are another highlight of Steelrising, with a bunch of really cool looking and intricate machines looking to put you down. These foes can be snuck up on, similar to the backstabbing you find in FromSoft games, but in combat you won’t find those moments. Replacing them are staggers, with the lock-on diamond also functioning as a meter to let you know how much longer you’ve got to land a big hit without being worried about being brained by a wayward swing. Speaking of enemy attacks, just like a Souls game these will follow patterns, so paying close attention to how a particular automat fights before you charge headlong into a battle is a good idea.

You’ll have a lot of different tools available to help you fight back against the robot baddies. Spiders has your regular RPG tree in place, with things like your power, agility, and resistances to level up. This functions like a Souls game, leveling an overall tree that lifts several stats. There are also modules (think perks), that give you extra passive boosts, like doing more damage when low on health, or doubling your stagger time. Spiders has made these systems so straightforward to what you know, it’s honestly one of the more boring parts of the game. They are there and doing what they should, but nothing remarkable about these systems. 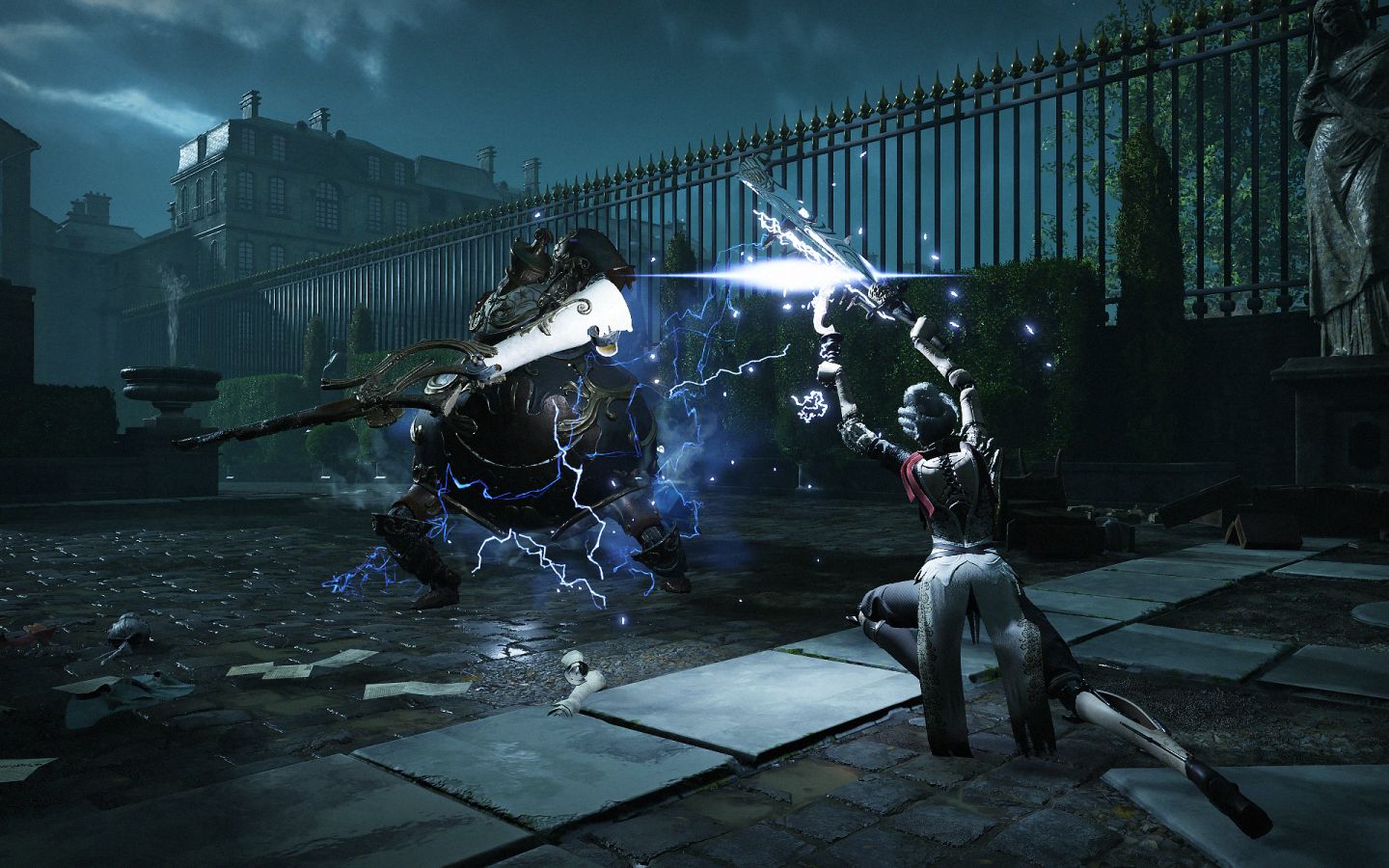 What is remarkable are the weapons, and those feel like pieces of art. You’ll start off with several choices at the beginning. Your decision boils down to the style you want to play, for example, a bigger mallet being slower than the metal fans. I personally went with the fans, which are quite visceral. The reason these are bits of art are because they are literally built into Aegis’s body, meaning every attack is an extension of her movement. I also really like the special moves each one has, with the fans billowing into a shield, or the, I believe it’s called “Fire Volley,” launching a near fireworks show. This isn’t even including new weapons you can pick up as the game progresses, or all of the elemental abilities, which some weapons have or are available as grenades. These elements can certainly come in handy, like frost, which can freeze an enemy in place for a few critical seconds.

Lastly, I want to give a standing ovation to Spiders for the assist mode. This is one of my favorite features of Steelrising, and it should be incorporated into every Soulslike. Essentially, the team didn’t want to make an easy mode, electing instead to make sliders to allow you to adjust certain aspects of the experience, like damage taken or how quickly your stamina recharges. These work to not only make the game more approachable, but much more accessible, with even the option to turn off damage completely. You do lose some difficulty-based achievements or trophies, but opening the game up so more people can experience it is a fantastic choice in design. Taking advantage of it helped me to adjust to how the game plays, with the ability to turn it back up once I’d acclimated. It’s just awesome, and I’m glad Spiders thought of it.

Steelrising is another gem from the mine that is Spiders. The choice of the steampunk, alternate history French revolution setting is amazing, and somehow the Soulslike formula works beautifully in tandem. Throw in a distinctive story and phenomenal assist mode, and Steelrising is a sleeper hit in a year where we could use another.

David Burdette is a gamer/writer/content creator from TN and Lead Editor for Gaming Trend. He loves Playstation, Star Wars, Marvel, and many other fandoms. He also plays way too much Call Of Duty. You can chat with him on Twitter @SplitEnd89.
Related Articles: Steelrising
Share
Tweet
Share
Submit