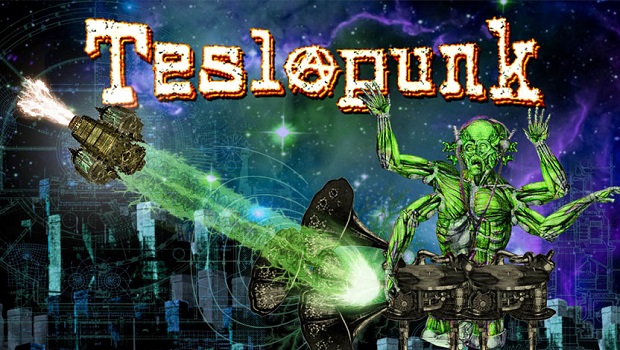 There’s nothing that brings me back to the 90s arcade era quite like the bullet hell genre. Pumping quarters to defeat blisteringly fast bosses all while memorizing patterns and avoiding endless streams of fire is how I liked spending my childhood days. The Wii U release of Teslapunk hearkens back to these sadistic times with six stages of alien smashing goodness, but is nostalgia enough to bring this game to indie greatness?

Previously released on mobile and Xbox One, Teslapunk stars a steampunk Nikola Tesla (because everyone adores him over Thomas Edison) as he’s pitted against a horde of aliens hell-bent on conquering the world. If the modicum of story is outlandish, that’ because it is, albeit charming in a goofy way. Each of the six stages includes waves of aliens that you have to shoot, and with it comes some witty dialogue on the sidebars. It’s this sardonic dialogue that sets Teslapunk apart from its competitors, and I did chuckle at a few lines and loading screens between stages. When murderous aliens start talking about their insecurities from reading poetry, you know you have a pretty fun story. The graphics are adequate, with a slightly dark atmosphere a la Centipede Infestation, contrasting a lot of flashy explosions here and there. It goes without saying, but those that suffer from epilepsy or motion sickness should stay away from this game.

The gameplay is pretty standard bullet hell fare, where your controllable spaceship is trying to dodge the torrential rain of bullets from enemy fire. If a bullet hits the center of your ship, you are toast, but you can graze bullets by the side of your ship, which will cause them to miss. To fend off the alien invasion, you have three attacks at your disposal. There’s your regular shot (which can be continuously held through an autofire button), a stronger laser (which slows down your movement), and a powerful voltage burst, which you control through a 3-bar meter. By defeating enemies, you can pick up energy that will power the meter, and once it reaches one bar, you can unleash the attack. Doing so will make you invulnerable for a few seconds and cause any bullets on-screen to be cancelled, thus adding to a multiplier that continuously goes down. In addition, holding at least two bars and getting hit will cause this attack to automatically activate, at the cost of resetting your multiplier back to one. The challenge in this game is balancing through the three attacks, whittling away at enemies while dodging their fire and adjusting your movement speed through your attacks while trying to find the best way to increase your multiplier without dying. Losing lives will also cause your multiplier to reset, while restarting from the beginning of a level will make your score zero.

Within the six stages are minibosses and bosses, which have a health bar. It takes time to destroy these enemies, and from time to time there will be normal enemies which you can shoot down in order to gain meter energy and points. These bosses take up most of the screen and are easily the best part of Teslapunk; memorizing their movements while also reading their inner monologues on the side of the screen were fun to experience, and even though I kept constantly dying on a couple of them, the game had me coming back for more.

The game pains itself to denote that a lot of its ships aren’t phallic. Hm.

While a runthrough will take around half an hour to complete, there are four different difficulties to master (including one that changes based on your current multiplier), each with progressively less lives, a higher bullet stream and multiplier maximum. Teslapunk also includes a slew of missions that will appease completionists, with each mission completing part of a death ray prototype Tesla needs to complete in order to destroy the aliens for good. The missions start out easy, such as reaching a certain stage or high score, but can ramp up quickly, such as completing the game with a multiplier you can only achieve on higher difficulties or canceling a requisite amount of bullets. Additionally, there’s a survival mode that restricts your ship’s movement to the x-axis. This mode is different, as enemies come in static waves, and your ship automatically shoots bullets, so you have to dodge piles of debris while collecting coins. As you can save and upgrade your ship here, this mode provides replay value when the main mode gets stale.

As great as the core gameplay is, the weaknesses in this game are just as detrimental. One minor quibble with the presentation is that the Wii U version does not support off-TV play. As this was originally released on smartphones, I would have appreciated the ability to look closer at my ship via the Wii U gamepad, especially since some of the later levels have darker palettes, which means bullets blend in the background, causing more deaths than usual.

The second flaw with Teslapunk is the soundtrack. Normally I’d be okay with generic sounding music, especially in a genre that focuses more on concentration, but the music is ear-bleedingly awful. The alien leader is apparently a DJ by night, but I’m going to assume that his night job is comparable to a Vogon poet. The music is a mashup of electronic music and hard-rocking guitars, but it fails on both ends. In the end, it’s a screechy, unintelligible mess that actually cost me a couple of lives due to the sudden nature of jump scare quality chords. I feel like it wants to be some sort of Vaporware electronic music, but the presence of rock elements causes it to be a bit disorienting; just look at the trailer. Here’s a tip: if a game doesn’t tout itself as a horror title, then don’t make the music cause heart attacks. I can tolerate below average scores and soundtracks, but this is actually the first game I had to play with the sound off. It’s a testament that the soundtrack alone can almost single-handedly ruin a perfectly serviceable experience.

I say almost because of the final, and most notorious, flaw: the game can freeze up for a split second on higher difficulties. While this only happened a handful of times, every occurrence led me to nearly die every time. While more taxing bullet hell shooters will cause frame rate stuttering (which is a blessing in disguise), I haven’t come across one that outright hiccups and makes your ship pop up somewhere else a second later. At first I thought this was because I was using a CRT television, but I played through the game on an HDTV and the problem was still present. This makes later stages annoying at best and unplayable if you’re gunning for a high score at worst. It’s a drawback that ruins such a great flowing game otherwise. It’s not a dealbreaker, but it does hamper the whole thing considerably.

Elisha Deogracias is an aspiring accountant by day, freelance writer by night. Before writing for Gaming Trend, he had a small gig on the now defunct Examiner. When not being a third wheel with his best friends on dates or yearning for some closure on Pushing Daisies, he's busy catching up on shonen manga and wacky rhythm games. Mains R.O.B. in Smash. Still doesn't know if he's a kid or a squid.
Related Articles: Teslapunk
Share
Tweet
Share
Submit