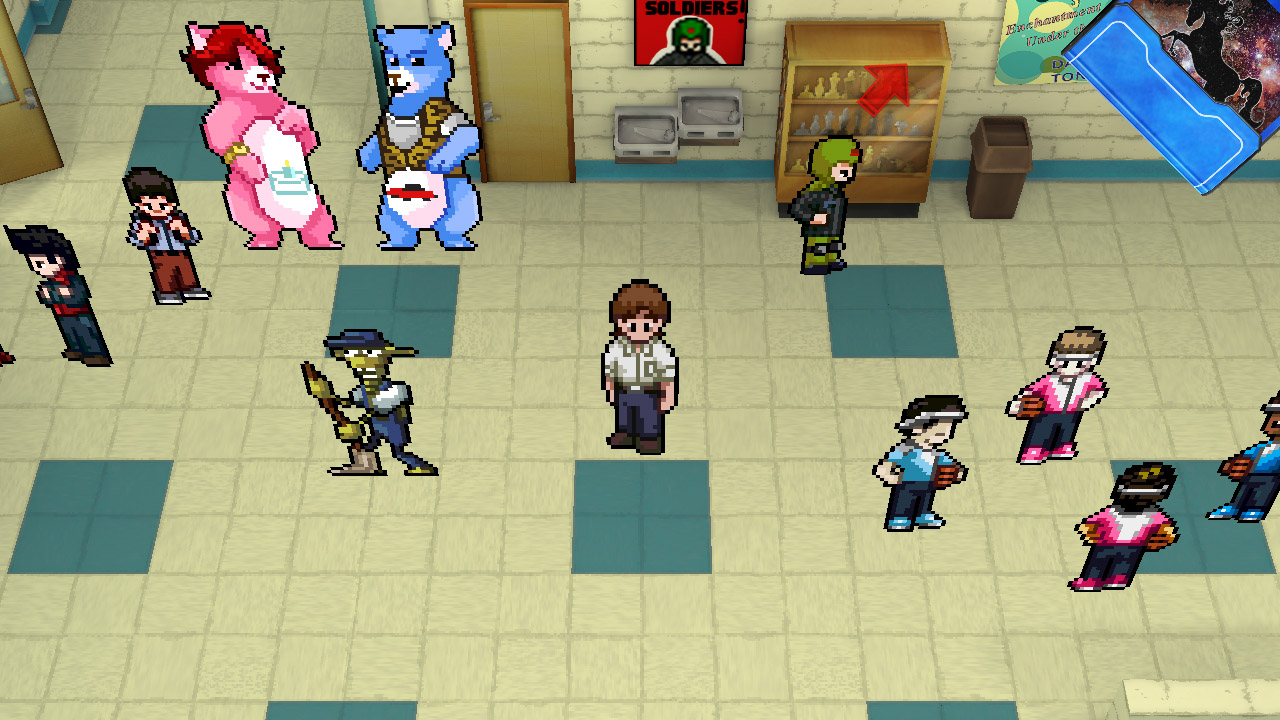 Mighty Rabbit Studios has brought Saturday Morning RPG to the Switch, and man is it fun. SMRPG is described as a episodic JRPG that takes place in a world heavily influenced by 80’s pop culture. Featuring a full soundtrack by composer Vince Dicola (Transformers The Animated Movie and Rocky IV) and his partner Kenny Meredeth (contributor for DuckTales, Power Rangers, X-men, and others). Players step into the shoes of Marty, and average high school student who gains an incredible power; but this power doesn’t come without baggage as it attracts the attention of Commander Hood, a notorious villain to the world. Marty must fight his way through various enemies to stop Commander Hood to save his hometown and the world.

Right when you start the game you are instantly transported to a traditional 80’s style living room furnished with a loud neon and black colored couch, wood paneled walls, a knob TV, and VHS tapes laying around. The attention to detail just in the main menu was great, and helped to give you an idea of what is in store for you as the player, which includes tons of great 80’s references and nostalgia. Being a 90’s kid, I’m sure I missed a couple references here and there, but for the most part I was able to pick up on most of the pop culture takes from the radically cool era. Your character Marty is clearly influenced by “Back to the Future” (hence the name) and the ability to ride around town on the neon hoverboard from “Back to the Future 2.” Aside form Marty, there are so many great character name puns in this game that it almost feels like a funny nerd paradise. I found myself being excited as a ran into a new character i haven’t met yet, just to see what there name was and if I could figure out what the reference was. Some of my favorites were Bobby Jett (Boba Fett), and Skeleboar (take on Skeletor) who rode on a pink chihuahua named Taco.

In the beginning of the game, Marty is given a Trapper Keeper notebook, decorated with various stickers. The notebook contains magical powers; and acts as your in-game menu where you can find quests, inventory, and your collection of stickers. You can customize your notebook with different backgrounds and stickers, both of which are found or unlocked throughout the game. The backgrounds on the notebook give you boosts while in battle such as +10 health or +5% Exp. The stickers you collect can be swapped on and off your notebook, and like the background, each have their own stat boost or perk. I spent some time running around each level trying to find all of the stickers to help make Marty stronger and to give him one leg up on the enemies I encountered. Your notebook becomes your most used item in the game, and has its own backstory which helps to push forward and develop the main story of the game.

Unicorns are so in right now.

Saturday Morning RPG brings five episodes for you to experience. Each episode you play through has its own theme, making each level feel new, different, and continuing with the story. Again, there is no shortage of 80’s pop culture here as there are Star Wars, Home Alone, and Transformers-inspired episodes. The episodes allow for a good amount of replayability. When you complete a level you get a ranking grade based on how much of the episode you completed. Each episode has a certain amount of battles, quest, collectables, and area explored.Every time you complete one of these tasks, you are given a reward in the form of an item, Exp, or money. There is definitely some things I missed in each episode, and I know I’m going to go back to try and complete the game to its fullest.

The battle system played like a JRPG, but gave the player active control while in battle. Marty has three moves including a basic punch attack, magic attack, and a power up multiplier. Some functions in battle include quick mini games to help you to have a stronger attack or more effective defense. The basic attack has a sliding gauge that you try and stop on a sweet spot, while some magic attacks have a button sequence to get the full effect of the attack. One of the most memorable mini games came with the Simon Says attack, where you actually play simon says trying to follow the color sequence. If you choose to use the power up multiplier, you are given the option to button mash, play a garage style mini game, or get a quick power up. The multiplier makes your attacks stronger, helping to give you an edge in battle. I particularly liked the power up animation as Marty charged up like he was a saiyan in Dragon Ball Z. On the other side of the battle system, defending is a key to survival. To defend against attacks you can tap A or the screen. With defending timing is everything; not defending you will take full damage, but a perfected timed defense will have you take less damage or even send a projectile flying back at an enemy. The only thing I didn’t like about defending was not all the attacks can be defended against, making it a little frustrating (especially with some boss characters abusing them), but bringing about more of a challenge in battle.

I started playing SMRPG docked to experience it on the big screen. This was fun and all, but you can tell the developers really wanted to utilize the touch controls, making playing in handheld mode a must for a full experience. You can use your finger to move Marty, open your trapper keeper, select moves in battle, and most importantly, scratch your scratch’n’sniff stickers. I preferred the touch controls over the button controls for powering up and sticker scratching, as I was able to get a higher multiplayer and more stickers bonuses. I’m sure I looked like a mad man trying to scratch all of my stickers as my finger moved furiously across my screen, but I so much fun scratching the stickers that I looked forward to trying to scratch them all. The only times I didn’t necessarily like/use the touch controls was for moving and defending in battle. I felt like my hand was getting in the way of the screen when moving, and I couldn’t defend fast enough against attacks. All in all the handheld mode just made the game feel a little more personal and interactive.

Saturday Morning RPG is available on the Nintendo eshop for $9.99, which is a great price for the amount and quality of game you will be getting. Mighty Rabbit Studios will be releasing a limited run of physical copies of the game for $29.99, and a SteelBook collectors edition for $69.99 collector’s edition. The collector’s edition will come with two 3.7 inch scale possible figures, an 18 x 24 inch poster, and a cassette tape featuring two songs from composer Vince Dicola (composer of Transformers: The Animated Movie and Rocky IV).

Saturday Morning RPG is an extremely fun and heart-filled adventure, giving a great homage to the 80’s. At $9.99 this game is definitely worth playing for the geekdom alone. I would have liked to play through even more adventures, but  I wouldn’t be surprised if we eventually get some DLC with more episodes down the road. I hope everyone who plays this game enjoys it as much as I did!

From Southern New Jersey, Shaun has always been a huge fan of video games as well as nerd, geek, and pop culture. No matter the topic of conversation, Shaun can always find a way to slip in a movie or TV quote to get a laugh. When he is not playing games or watching shows, Shaun works as a substitute teacher during the day and as a bartender at a local brewery on nights and weekends.
Related Articles: Indies, Saturday Morning RPG
Share
Tweet
Share
Submit