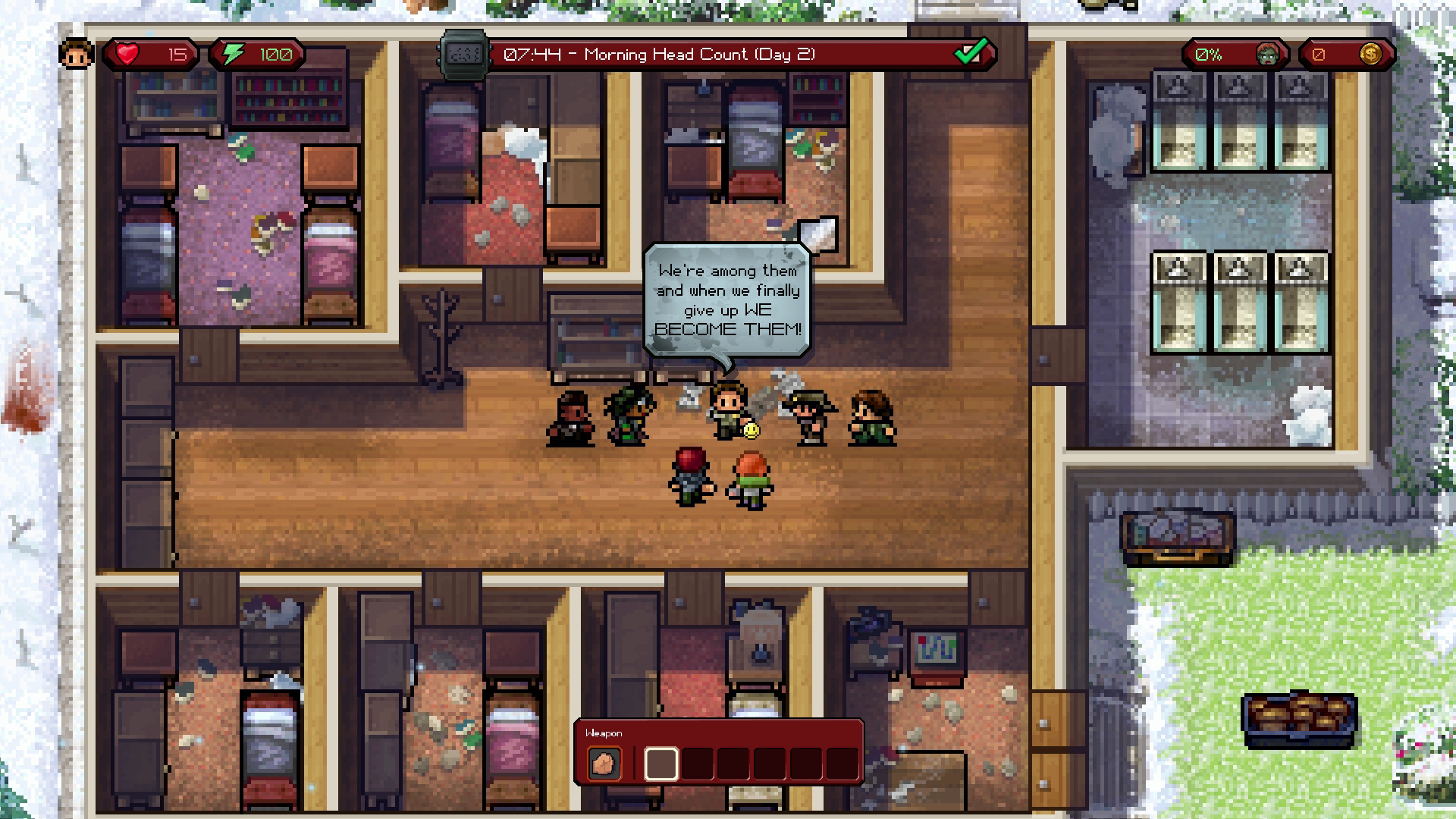 The Escapists: The Walking Dead takes the puzzle-RPG formula of the original game and soaks it in walker entrails. Robert Kirkman’s award-winning comic book series, The Walking Dead, is realized in 8-bit form: from the moment protagonist Rick Grimes wakes up in the abandoned Harrison Memorial Hospital to when his survival-hardened group ends up in the appearingly safe community of Alexandria. Each of the five levels you must escape from is an iconic locale from the books. Unfortunately, aside from the name, there are almost no distinguishing landmarks or set pieces that make you feel like you’re playing a The Walking Dead game. The Greene Family farm looks like any farm ever, and Meriwether Correction Facility is just…well…a prison. Trying to transition the incredibly detailed and grotesquely lush comic book panels of the series to a top-down map of 8-bit pixels was probably not an easy task, but that’s no reason for the game world to look and feel generic and bland.

The story is told via captioned pictures that show Rick and the other characters on their journey. The sequences are typically less than 30 seconds long and are only shown between each of the levels. Along with these relatively useless snapshots, there is a short paragraph that summarizes how the survivors ended up in their current location. In truth, if these “story-telling” facets didn’t even exist, it wouldn’t take anything away from the overall experience.

The world of The Walking Dead is terrible, fearful and grim in all of the best ways possible. The Escapists: The Walking Dead is none of those things. Not once was there a sense of dread or suspense. There was, however, plenty of tedium, repetitiveness and frustration. One word that encompasses all of those things is routines. Each level requires you to complete certain main objectives to escape. If you want to escape the Greene Family farm, you have to get to the RV, which is on the other side of the walker-filled barn. But before you do that, you have to explore the map, looking for weapons and armor to arm the other survivors with.

That’s all well and good; the main objectives are actually kind of fun…if there weren’t mundane routines getting in the way. Attending a headcount twice a day, completing two chores, and eating three meals is a hassle. They’re spread out throughout the day, so there is never a real chunk of time (except night time) where you can accomplish your main objectives. The headcount literally consists of you walking to the meeting spot, showing your face for a second, and then going about your day with stuff that matters. It’s only purpose is to make you drop everything you were doing at that moment. That’s it. Eating meals is the same thing–show up and you’re good to go. Sure, you can replenish any lost energy while you’re there, but I never found myself needing any at meal times. Chores are the worst. Not only are they as pointless as the headcounts and meals, they actually take up time. Remember that awesome part in The Walking Dead when Rick and everyone moved frozen meat into the oven, waited, and then put the cooked meat onto food trays? Or when Rick and the gang all got together and did laundry? No. I don’t either, because it’s boring and no one wants to do that. The routines add nothing to the game and drastically hinder the overall experience.

Mentioned earlier was night time. You can choose to stay awake and explore on your own without routines getting in the way, but the consequence to that is that you can’t save the game. If you choose to forego sleep, you can’t save during the day and will have to wait until the next night. It’s a unique risk/reward mechanic that some might enjoy, but I never saw the need to use.

As Rick, your job is to survive, keep your group alive, and always stay moving. When the Governor keeps you, Michonne and Glenn hostage in Woodbury, you have to escape. When zombies overrun the Harrison Memorial Hospital, your have to escape. In order to do that, you have to be stronger, faster, smarter and better-equipped than the walkers and, later on, other enemy humans. To increase your strength (which will increase your health and melee damage) you must either lift weights or hit a punching. You just rapidly alternate tapping LT and RT until you’ve depleted your energy and then you wait a little while until your energy recharges and you do it again, and again, and again… To increase your speed (which will increase movement and attack speed) you do the exact same thing. To increase your intellect (which will increase your crafting abilities) you walk up to a bookshelf and press A over, and over, and over… It’s a grind and it’s not worth it. Most of the time you can just juke out walkers or herd groups of them away from areas that you want to get to.

The few times that you do need to fight, you’ll want to be well-equipped. If you try to go against a walker one-on-one with just a screwdriver or a wrench, you’re toast. Exploring the map, finding crafting notes, and creating more powerful weapons is key to survival. You found a bat and some nails? I wonder what you can do with those? Most of the craft notes I found weren’t very inventive or impactful. One that looked cool, but I never made, were the “razor claws” that looked like Vega’s claws from Street Fighter. But that’s pretty much it.

Whether you’re looking for weapons, crafting items or keys to unlock doors to new areas…wait, I didn’t mention the keys. Oh, I’m sorry. Much of the game’s hook is puzzling your way through the map. Whether that’s breaking through walls, climbing into ventilation systems, or tunneling underground, you have to find your way into seemingly impenetrable areas. Keys are one of these means of entry. Locks of varying colors will prevent you from progressing until you find the appropriate-colored key. They “key” word there is find. They can be anywhere. It took me two hours of meandering (including breaks for meals, headcounts and chores) to find a cyan-colored key to open one door.

Another element to survival is sticking together. In the early stages you can do quests for survivors to increase their morale by collecting items that they need. Once you’ve gotten them to like you, a smiley face will float over their head and that means they can now follow you. More nail bats beating a zombie to re-death are better than one. Plus, if you have survivors with you, then that means they aren’t off by themselves getting killed by a walker. If a survivor gets into a fight with a walker four things can happen: 1. they kill the walker (not likely) 2. they get downed and you save them (or you die trying to save them) 3. they die and come back as a walker (making life that much more awesome for you) or 4. they die and the game is over and you have to start the entire level over!

The Escapists: The Walking Dead

The Escapists: The Walking Dead is a boring and uneventful game. It takes a mediocre game formula and slaps a cheap coat of licensing paint on it. As a The Walking Dead fan, a fan of puzzle games, RPG games and retro-style graphics, there is nothing I can say I enjoyed about this game.

On December 5, 1986, Josh was born into this world pink-faced and squalling. His only thoughts were, "WHAT IS GOING ON? WHO ARE ALL OF THESE PEOPLE? AND WHY THE HELL AM I NAKED?" 19 years later he bought an Xbox 360 and now plays and writes about video games. Life is funny that way.
Related Articles: The Escapists: The Walking Dead
Share
Tweet
Share
Submit