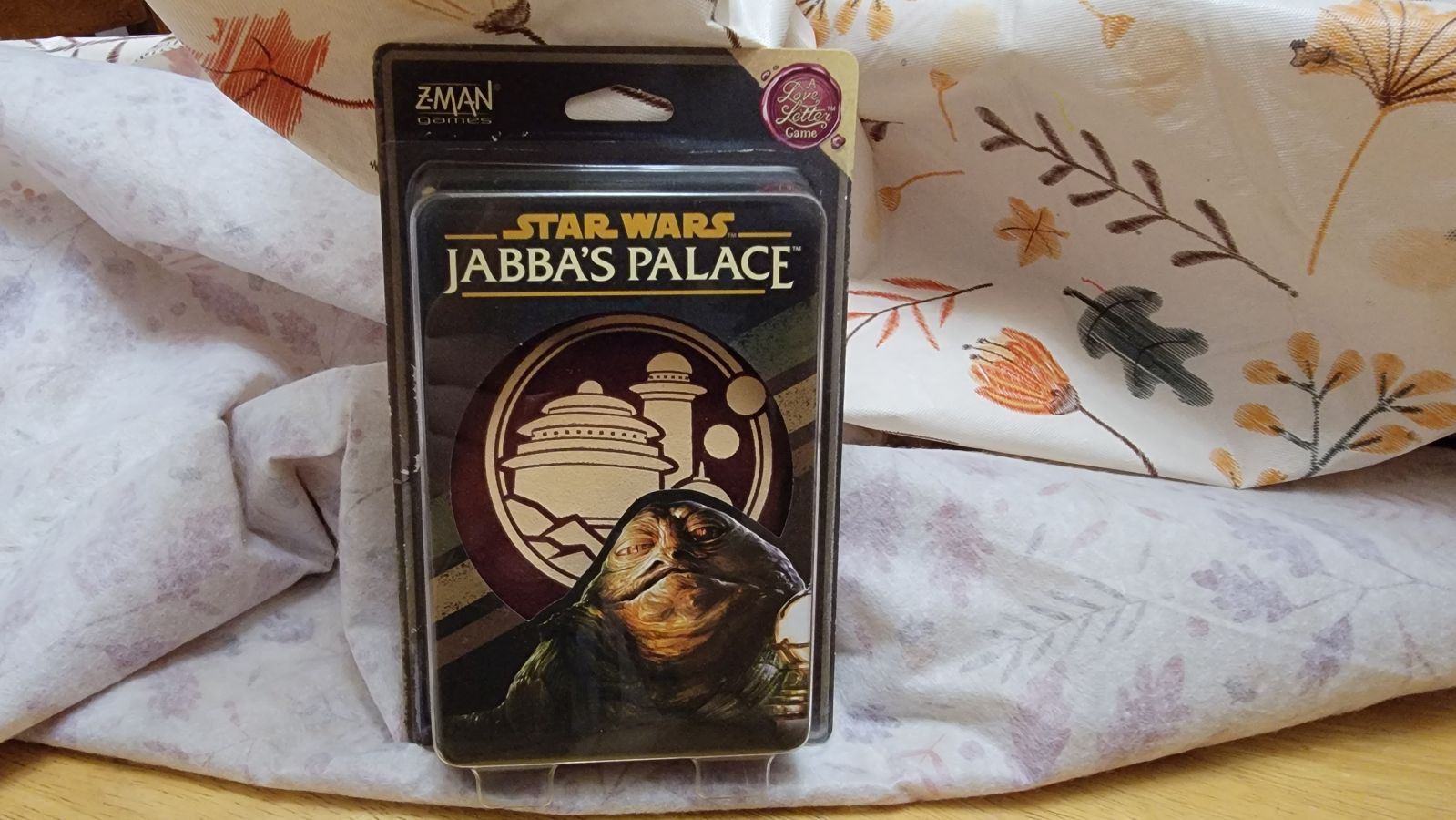 In a galaxy far, far away… fans were long ago introduced to the Star Wars universe. In a collaboration between ZMAN Games and designer Justin Kemppainen, we are welcomed back to the planet Tatooine- more specifically to Jabba the Hutt’s Palace. In this two to six player game, players will compete to have the most Jabba’s Palace tokens based on player counts.

In this beautifully crafted game, Jabba’s Palace is a welcome and inviting yet familiar backdrop for one of the better filler type games that is available in today’s board game market. From tokens that contain little images of Jabba’s Palace, with the classic Love Letter burgundy that is so recognizable, to classic yet amazing art for the cards, anyone who is a Star Wars fan or a Love Letter fan is sure to enjoy this game. 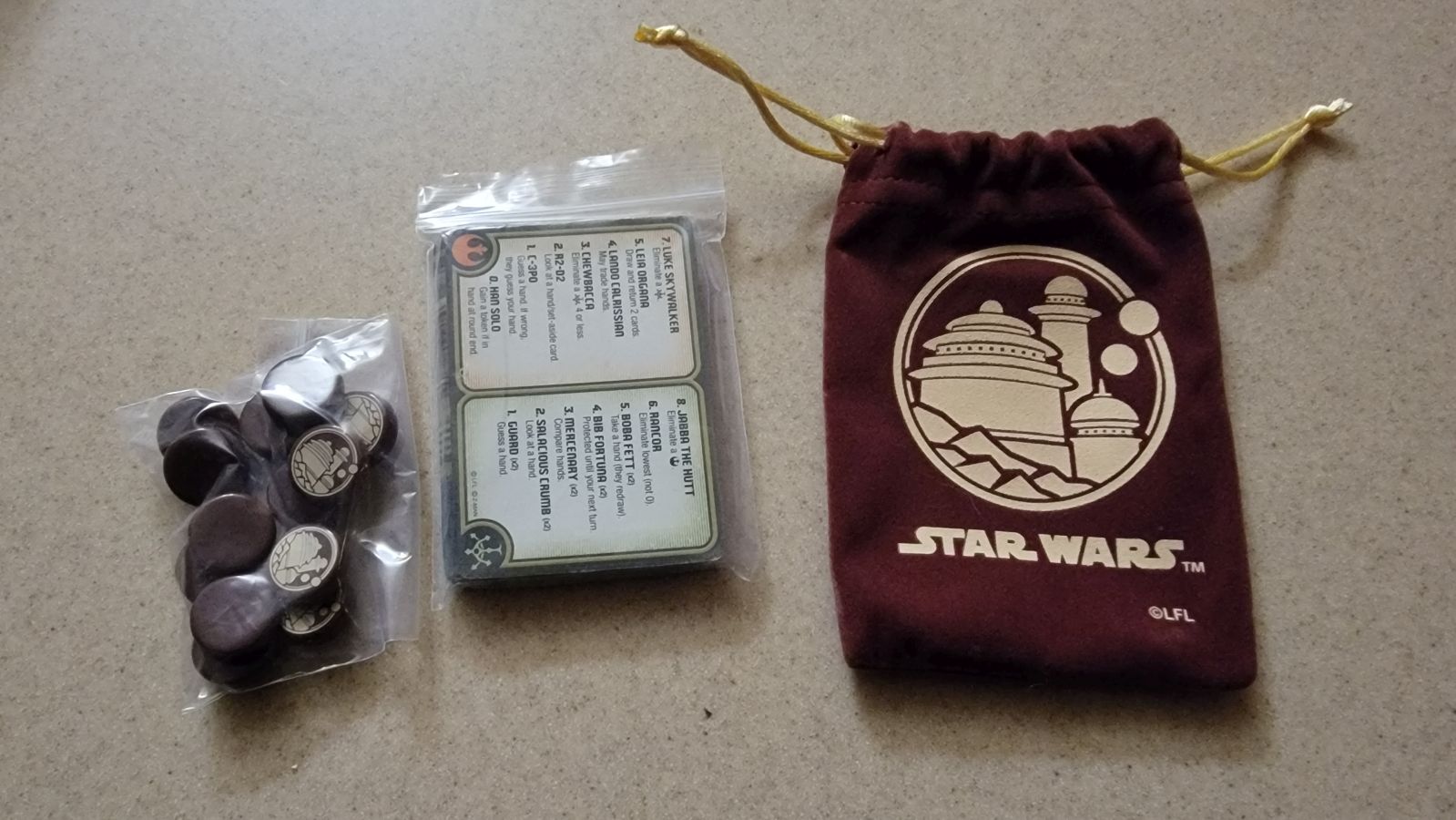 What starts out much as any other game in the Love Letter catalog quickly separates itself from the pack and becomes a much more unique way of playing Love Letter. In tried and true fashion for Love Letter or in this case Star Wars Jabba’s Palace, the deck is shuffled, a card is removed from the deck at random and without revealing it, and last players are each dealt a starting card. How, might you ask, is this different from any other Love Letter games in the past? Star Wars Jabba’s Palace a Love Letter Game brings along with its velvety smooth bag, and tokens, and art, a set of four cards that change how you play the game. This set of four cards are known as Agenda cards.

Why would I care about agenda cards anyone might ask? Well the agenda cards provide a fresh and new way to win Love Letter rather than just outlasting your opponents round after round. Each Agenda card is specific in its text and tells players how they might win a round instead of being the last one standing. Unlike your typical version of Love Letter, Jabba’s Palace presents players with cards numbered zero through eight, instead of cards numbered zero through nine. What sets these cards apart from the classic game, is not only are the cards numbered like normal without a number nine to be the princess, but there are seven cards that have orange(rebels) borders and numbers to them while the other 12 cards have green(hutt’s) borders and numbers. 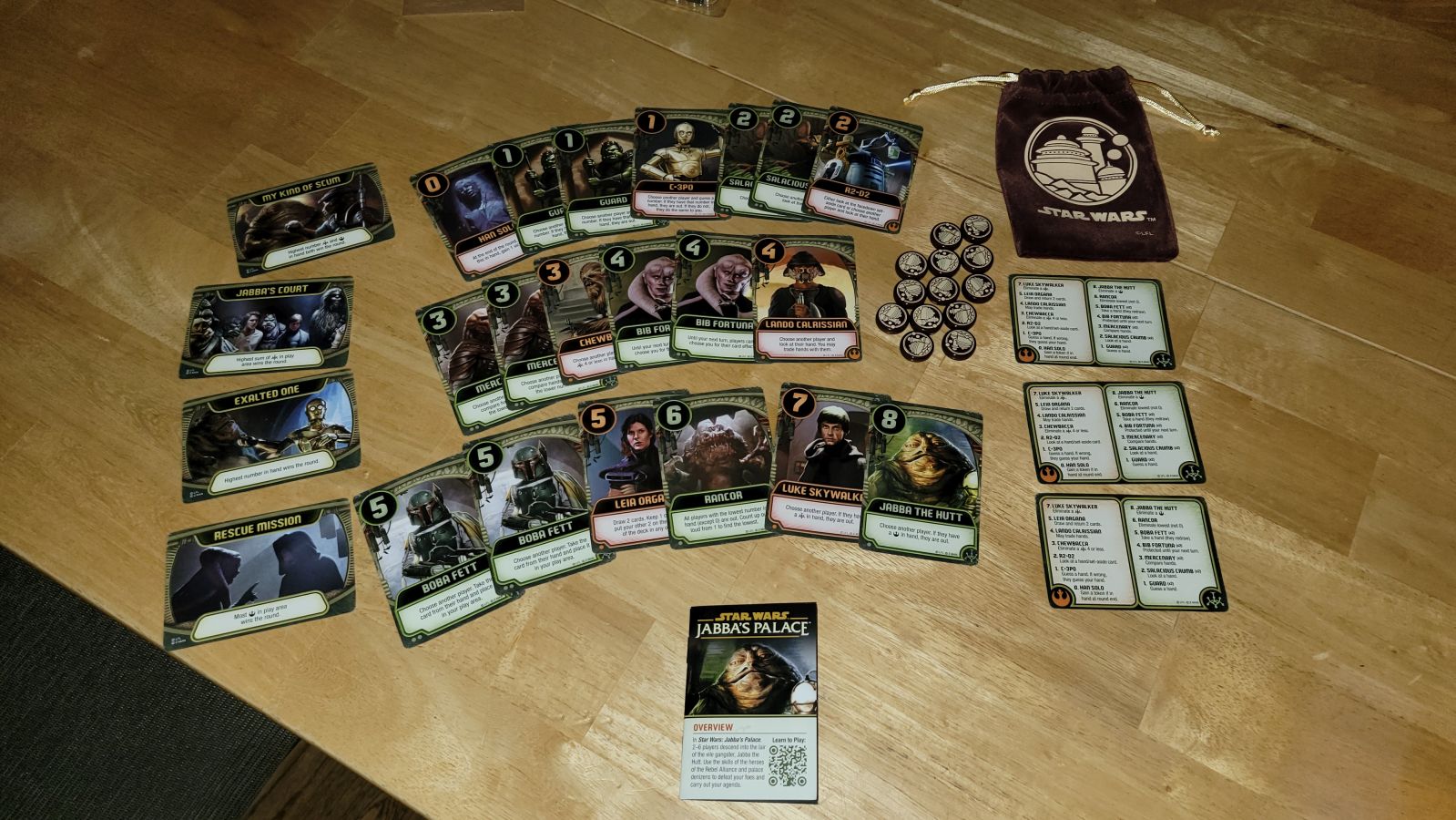 After taking quick note of what characters adorn which numbered cards, the theme of Star Wars shines through showing characters that are pulled right from Star Wars: Return of the Jedi and allowing players to play through a Love Letter version of the first part of the movie. Circling back to the Agenda cards, it is these different characters and two different types of factioned cards that ultimately allow players to score tokens based on the Agenda card chosen for each game played of Star Wars Jabba’s Palace – a Love Letter Game.