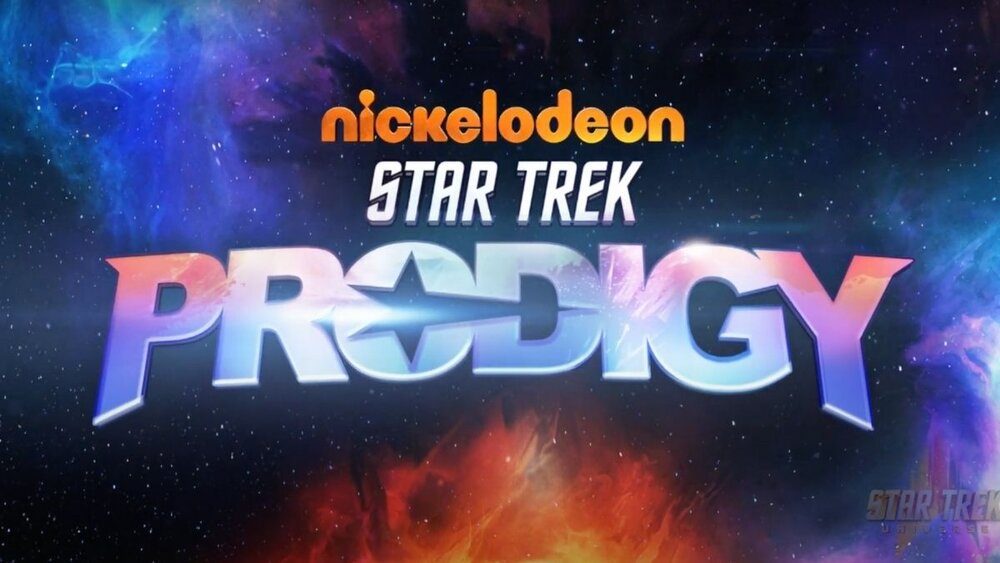 I’ve been around Star Trek my entire life. My parents are both Trekkies and have been since they were children. That being said, I’ve experienced the ups and downs of Star Trek since 1993. I watched the movies with them, saw the Original Series every morning before school, watched The Next Generation more than once all the way through, and more. When Star Trek: Prodigy was announced, I didn’t give it much thought. There was so much Star Trek in the past few years from Discovery to Strange New Worlds to Picard to The Lower Decks. Star Trek and I have had an interesting relationship the past few years. I love the worldbuilding in Star Trek, however, I was having trouble fitting so many shows into my viewing windows, I felt like there wasn’t a unified direction for a little while between live action shows (which I’m aware has been fixed), and I was just overwhelmed by the sheer amount of drama in the Star Trek community (as a Star Wars fan as well, I get plenty from that side). I was curious to see how another show would stack against them. Well, Star Trek: Prodigy is currently my number one show out of all of them. Let’s talk about why.

Star Trek: Prodigy follows the story of the crew of the USS Protostar. However, it doesn’t start on a ship at all. The show opens following Dal R’El trying to escape from a mining camp full of what The Diviner (the bad guy) calls “the Unwanted.” Essentially, it’s a slavery asteroid where The Diviner has bounty hunters bring people to and makes them dig for something. Dal has seemingly tried to escape multiple times, but never has done it successfully. The Diviner and his Progeny, Gwyndala (or Gwyn as her crewmates call her) capture Dal again after another failed attempt and tell him to find “Zero” or die. Zero, being a Medusan, is in a little containment shell since they’re corporeal and would make a viewer go mad looking into their uncontained form. The Diviner wants Zero’s power and will do whatever it takes to get it. After some shenanigans (I don’t want to spoil everything) Dal, Gwyn, Zero, and their new friends Rok (one of the most amazing characters), Jankom Pog, Murph, and a surprise reveal of a hologram Janeway AI; all escape the asteroid in a buried USS Protostar and run across the galaxy. And… well, the Diviner isn’t too happy they got that ship and he wants it back. 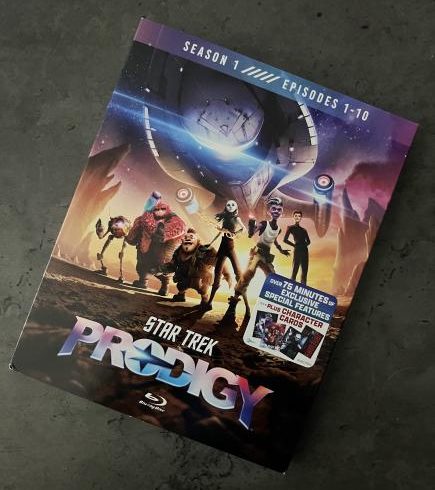 The show itself is beautiful. The animation is top tier, looking like a mixture of animation styles from Star Wars: Clones Wars and League of Legends: Arcane. With this Blu-Ray set, my Xbox Series X was firing on all cylinders on the TV. Truly the most impressive part was how white the whites were and how blues the blues were. While everything looked fantastic, those two colors really popped which works well with Star Trek’s aesthetic in general. Gwyn is the one who benefits the most from these colors popping as her color scheme is the white, blue, and silver look. Each planet the crew of the USS Protostar visit is unique and beautiful in their own way. My favorite being a planet that holds more mystery than it seems. It’s featured in episode four, Dream Catcher, which is definitely a highlight of the first ten episodes.

Another amazing highlight to Prodigy is the music. Michael Giacchino and Nami Melumad tag teamed the music working together to produce a soundtrack that is, in my opinion, one of the best I’ve heard from Star Trek in a while. Both have worked with Star Trek before, Giacchino writing the music for the 2009 era Star Trek movies while Melumad worked with the show Star Trek: Strange New Worlds. The Prodigy soundtrack definitely feels like a culmination of years working with the same franchise. They clearly understood what the music needed to be for each instance. From the grandiose of seeing the USS Protostar for the first time, seeing a new planet on sensors for the first time, battle sequences, or touching moments between the crew, the music was a highlight of this show. 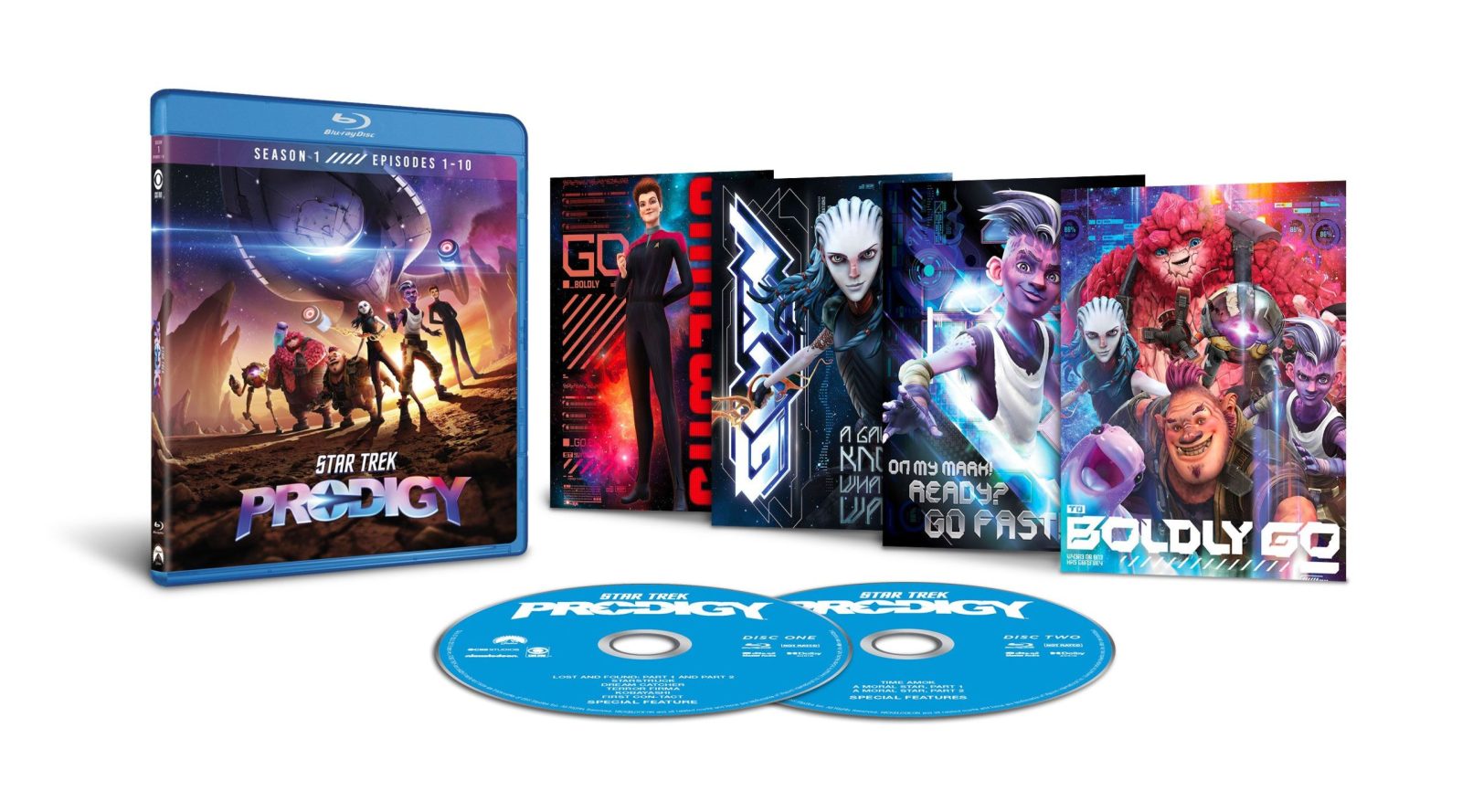 This box set includes the first arc of the story which includes 10 episodes between 20-30 minutes in length. The box set also includes over 75 minutes of bonus content all about building the world, the characters, and more. Special Features are all on the second disc and are unique and fun if the behind the scenes is your thing. I enjoyed seeing some of the behind the scenes worldbuilding considering how large Star Trek is as a franchise. The box set also includes character cards for Dal, Gwyn, Hologram Janeway, and then a group shot. Each of these cards have text on the back explaining things like the Kobayashi Maru, The Prime Directive, Holograms, and then Trek Tradition. For the recommended retail price of 17.99, this is a good deal, especially if you’re a fan of the show or have kids who’d like to have the cards (I was the kid who hung up the cards like posters in my room).

Speaking of kids, while this show is targeted at a younger audience, Prodigy follows the trend of Avatar: The Last Airbender, Legend of Korra, Star Wars: Clone Wars, Rebels, and Bad Batch being a show the entire family can enjoy. There are also some very intense themes such as trauma of being stranded alone, slavery, and more than might be a way for parents to talk with their kids about important life lessons in a way they can understand. 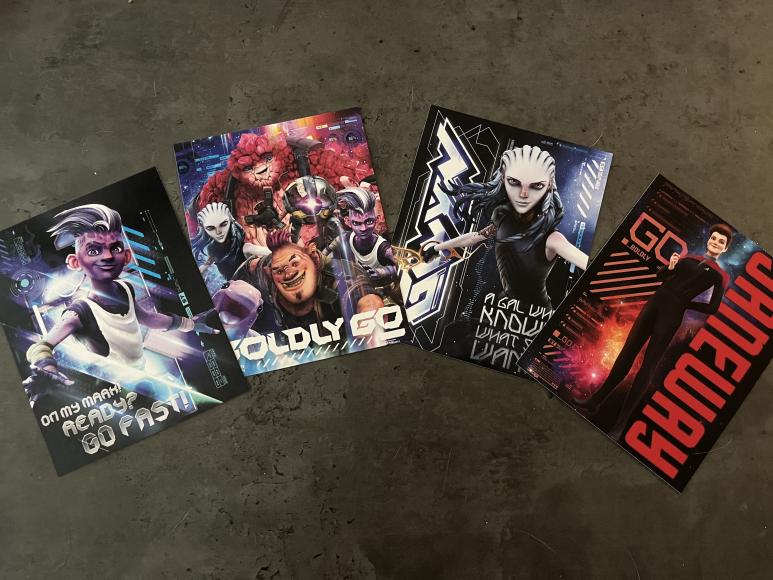 Star Trek: Prodigy is a heartwarming animated take on Star Trek. This Blu-Ray set contains the first 10 episodes which makes up an entire story arc on its own leaving you wanting to jump on to Paramount+ to finish the first season. With beautiful animation, adorable characters, impressive music, and most importantly; good writing, I recommend Star Trek: Prodigy to fans of Star Trek and beyond.

Adam is a musician and gamer who loves his partner in crime, Regan, and their two pets Rey and Finn. Adam is a fan of Star Wars, NFL Football, and gaming in general. Follow Adam on Twitter @TheRexTano.
Related Articles: Star Trek: Prodigy
Share
Tweet
Share
Submit