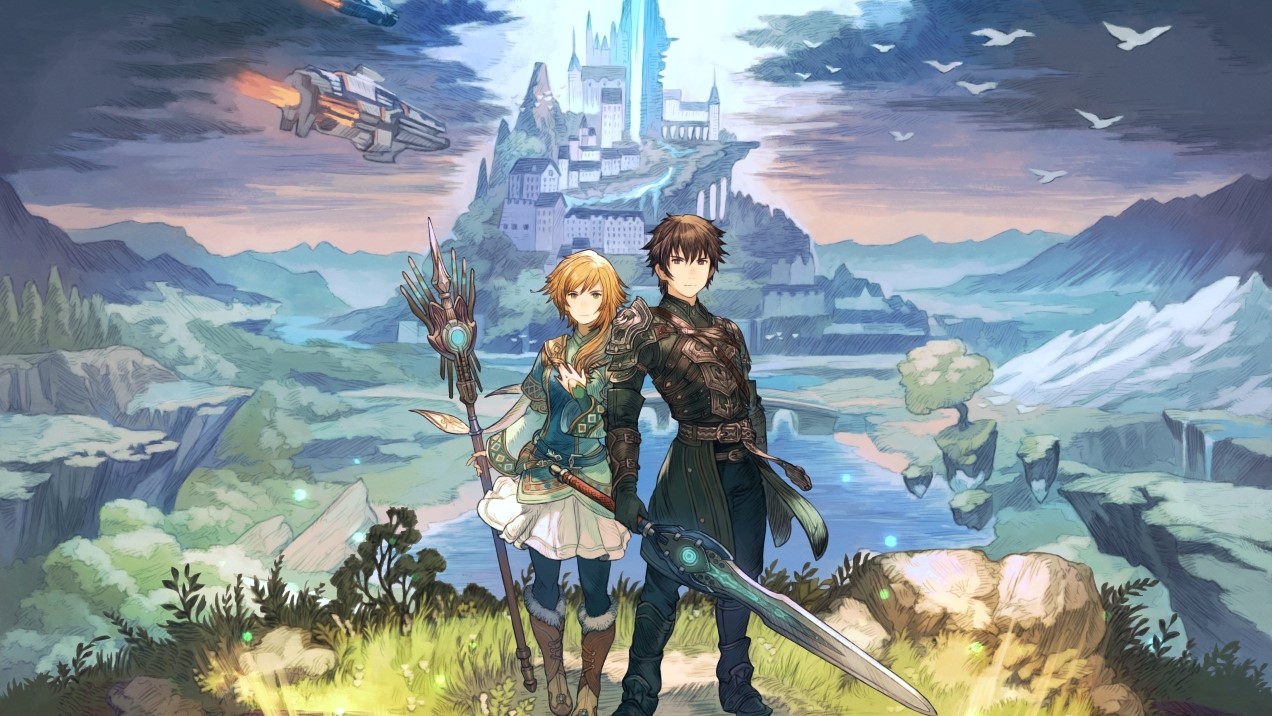 The Archelites, a race of machines from beyond the stars, have waged war with the world of Heryon for years. Able bodied people from all over are being drafted and sent to the front lines to die, if only to keep the invaders away from cities. Worse still, the Archelites have unleashed their most deadly weapon yet: The Corrosion. This disease causes the infected to slowly deteriorate and lose their minds, eventually becoming monsters that attack and infect others. One day, a hardy soldier named Daryon receives a letter from his sister, Selene; their mother has contracted the Corrosion and doesn’t have long left. After the rest of his squad die in a surprise attack or are killed by a high ranking official in a ritual called the Ascension, Daryon deserts the military, a crime punishable by death on sight. The two siblings regroup at their childhood home to see their mother, where Priestess Selene reveals that she’s been tasked by the Sanctorium to find a cure for the corruption, the real reason she sent Daryon the letter. To save their mother, the two set off on a journey around the world to discover a cure, save their mother, and hopefully the world.

I was immediately impressed with Edge of Eternity. Developed by a team of only 9 people, it’s an incredibly ambitious game inspired by classic RPGs like Final Fantasy, taking those ideas and structure into the modern day. Aside from a tolerable amount of jank, it largely succeeds at this endeavor and is one of the best RPGs I’ve played in a long, long time.

After the linear opening, Edge of Eternity puts you straight into its gorgeous, gigantic open world, and even this area is just a small taste. As Daryon, you can explore, fight monsters, quest, and befriend a cute animal called a Nekaroo which will serve as your mount. While you only have one party member here, this area serves as a great sign of what you can expect for the rest of the game. When you encounter an enemy on the field, you engage in battle right then and there. Combat uses a version of the Active Time Battle system (ATB) seen in games like Final Fantasy VII and occurs on a grid of sorts. All participants are in nexuses, six sided shapes dividing the battlefield, and every skill has a certain range, for example a melee attack can hit any adjacent nexus, while a healing spell might have a range of up to two nexuses away. Every character and enemy also has their own ATB bar which, once filled, allows them to act (i.e. moving to another nexus, attacking, casting a spell, etc.). While some actions are instant, others will take time to go off. These moves are signified by a red bar which, if it doesn’t have a lock symbol on it, can be interrupted with a physical attack. With up to four party members in battle at once, this keeps combat tactical and engaging. Even normal encounters are a lot of fun to figure out how quickly you can defeat the enemy, and boss battles often have additional mechanics you’ll need to manage to keep things varied and hectic.

Crystals are what determine your stats and skills in battle. Every weapon has a different crystal grid, where you equip stones of different colors to boost attack, defense, magic, and other stats as well as possibly gain spells/abilities to use in combat. For example, Daryon can gain an Ice attack by equipping a light blue crystal with the spell attached. You can fuse crystals together to create even more powerful crystals, possibly with multiple spells attached to maximize space. There are several crafting options for all kinds of items and equipment, which does feel a bit crammed in. Crafting materials, in my experience, are difficult to come by, so you might be stuck with a weapon that’s already at its max level for quite a while. 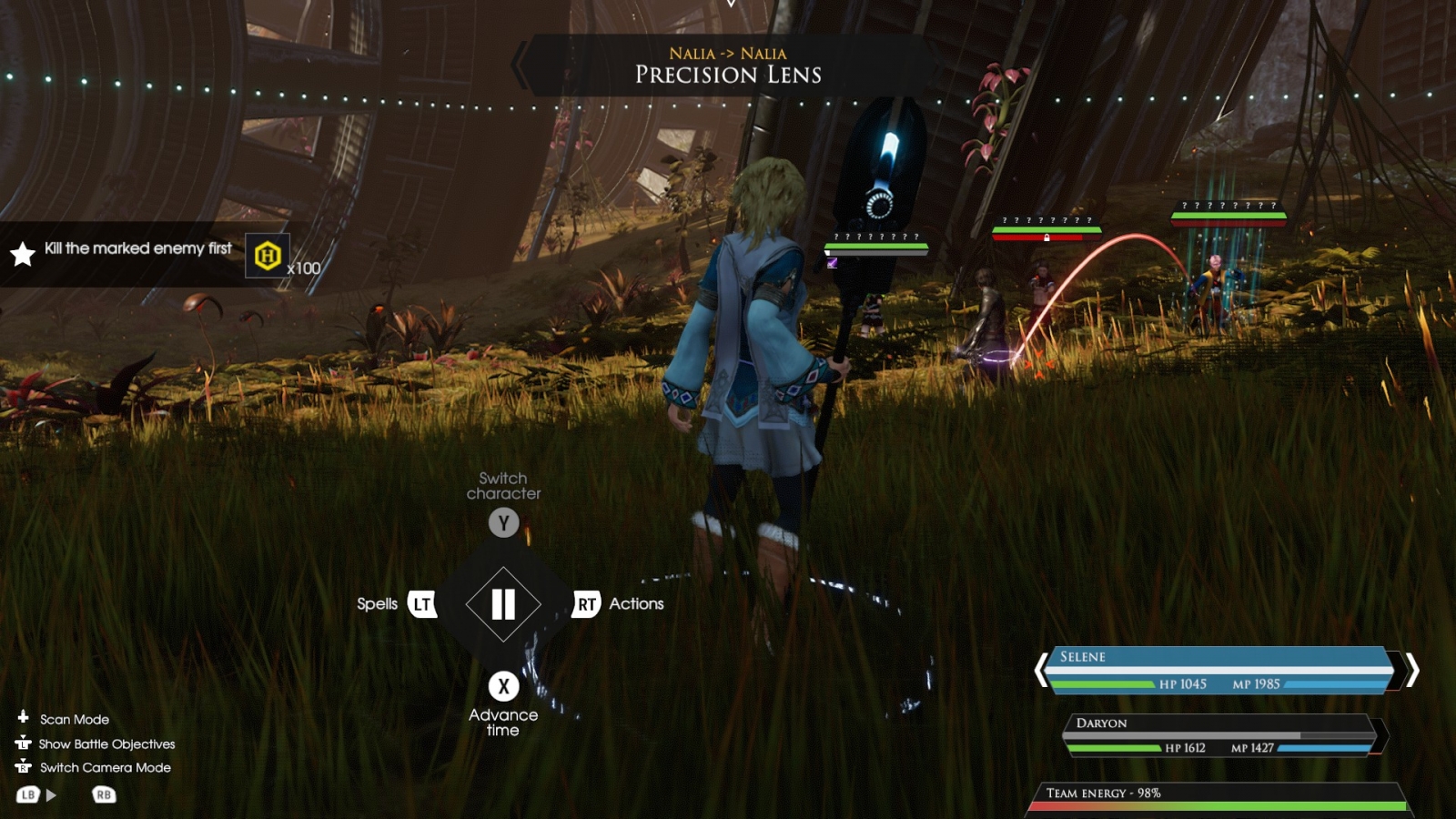 While battles overall are a good time, there were more than a few fights I felt were grossly unfair. For example, once you reach the junkyard dungeon a few hours in, turrets will occasionally appear in battle either randomly or because they were nearby on the field. These things will kill you almost instantly with no hope of retaliation since you only have two party members. You get a third character at the end of this area, who can actually deal with these mechanisms, but by that point you don’t have to fight them anymore. There are a few enemies like this throughout the game so far that just feel cheap, and I tried to avoid them as much as I could without falling behind in levels.

If you just want to experience the story, however, Edge of Eternity’s combat difficulty is highly customizable. Along with difficulty presets like easy, normal, and hard you can fine tune combat difficulty with a slider and set if enemies will scale up to your level, if you’ll scale to theirs, or just turn off scaling all together, You can also enable convenience features like the ability to save anywhere and teleport at a whim. You can’t turn off battles all together since the game often uses them to tell the story for some excellent character moments, but this is a fantastic set of features to help anyone play the game. In terms of accessibility features, the game is a little lacking. You can change subtitle size and disable annoying flashing during special moves as well as rebind controls, but there’s not much outside of that like a dyslexic font option or colorblind modes. It’s a good start, but like the rest of the experience it could use more polish. 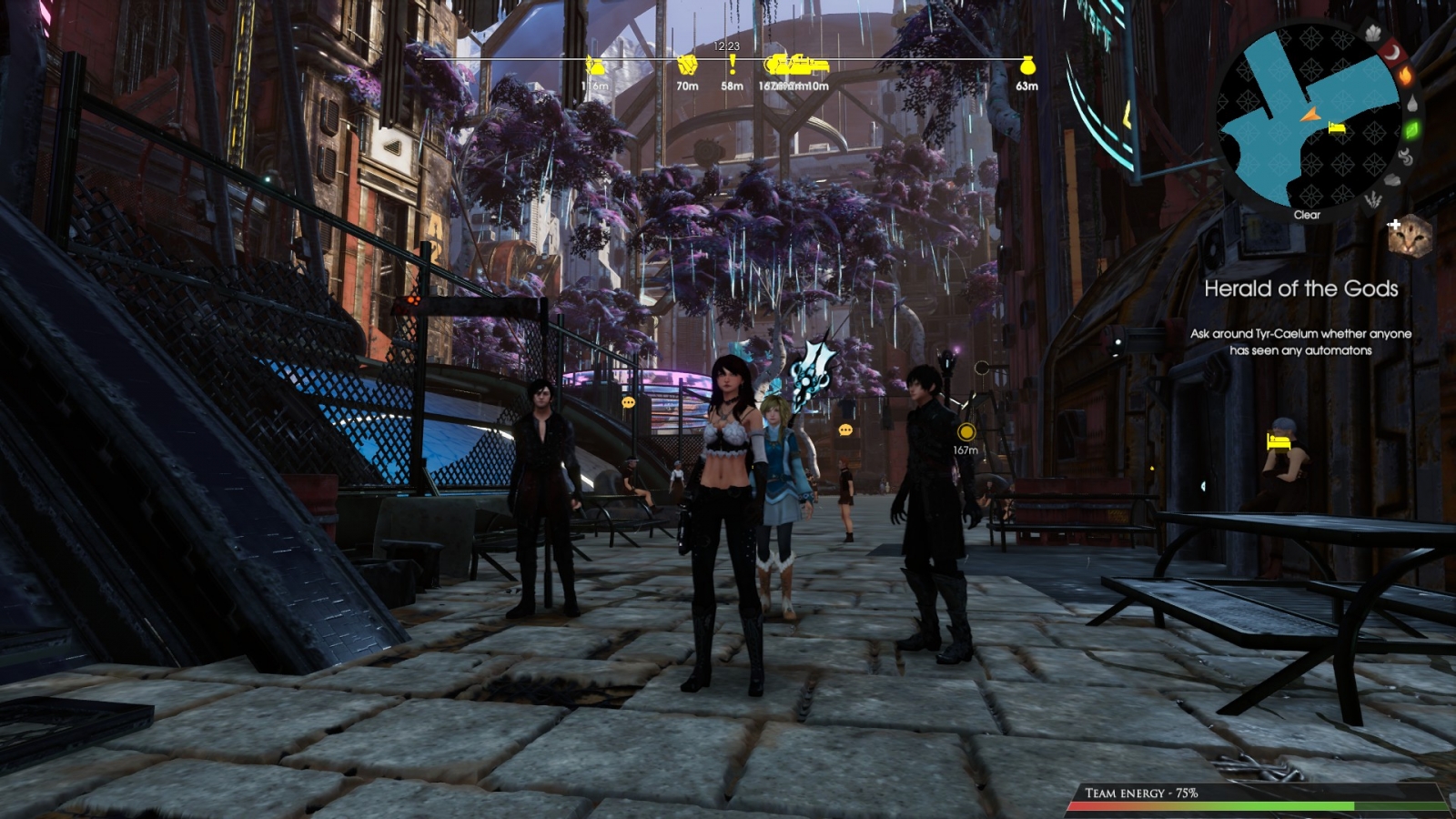 On that note, while the environment visuals and character models are gorgeously rendered, things like the UI and animations could still use some work. For example, the combat menu is separated into three sections: a main menu, attacks, and skills. With a controller (which is how I primarily played), you use the triggers to toggle between the three menus, which is fine for the most part, but I do wish more common actions like attack could be easily used from the main menu to speed up battles just a bit. Granted, the assigned button is already taken up by each character’s special move (which slowly fills up as you fight) on this menu, but outside of bosses I hardly had the chance to use those.

Animations often look robotic in cutscenes, which given the game was made by a total of 9 developers I can certainly look past. The voice acting is also hit or miss, with some stellar performances and some… not so great line reads. I’m not sure the actors had proper direction with certain lines, for example Daryon might be screaming with justified anger one moment then sounding calm and sarcastic the next. Thankfully, the quality of the characters and story mitigate this. 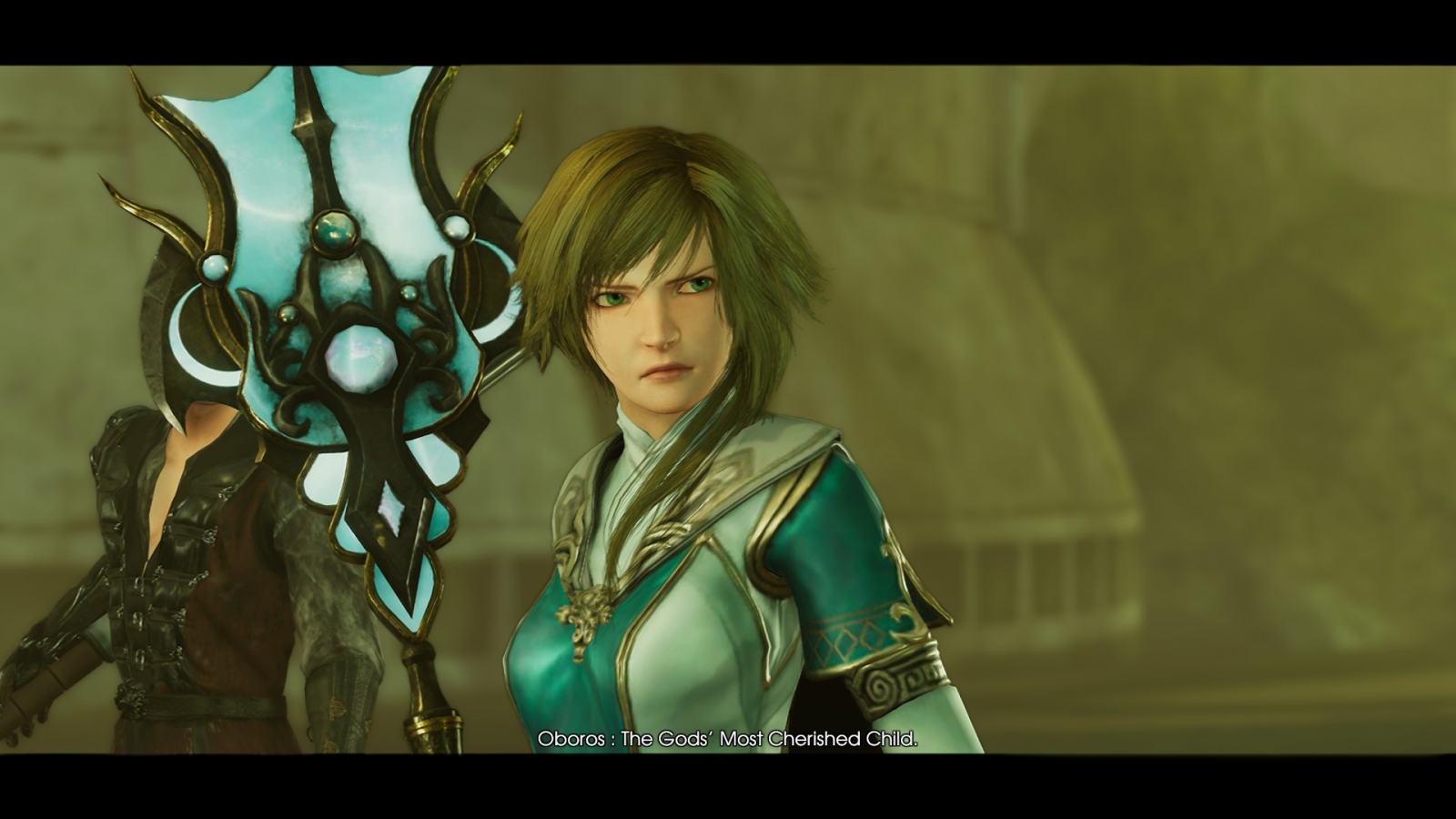 The actual writing has a lot of typos, grammatical errors, and general weirdness but the characters themselves are one of the best parts of Edge of Eternity. They all feel so human and relatable you’d be hard pressed to not like them. For example, Selene’s demeanor will change greatly depending on who’s around, with Daryon she’s a jokey, sarcastic younger sister while with the people of Heryon she holds a lot of authority and isn’t afraid to use it both to inspire people and tell off people who wrong her. She might seem simple on the surface, but she’s got big plans she prefers to keep to herself. Another example is Ysoris, an extremely depressed Cyborg and the only known survivor of the Corrosion. He starts off wanting to isolate and is incredibly rude to everyone including himself, but he’s slowly growing into someone you can rely on while trying to overcome his self destructive tendencies. While you can clearly see the Final Fantasy characters they’re inspired by, they all easily stand on their own by being complicated, interesting people.

The plot will instantly grab your attention and never let go. As I said before, the game starts by showing you the world ending stakes, but it quickly starts to focus on the more personal story of siblings trying to save their mom. Make no mistake, Daryon and Selene are on this journey for their family, saving the world is just a bonus. Along with this central hook come a ton of wrinkles in the plot that all tie together nicely, like the politics of each region, the corruption (because of course) present in the religious Sanctorium, and much more I won’t spoil here.

The music and overall sound quality of Edge of Eternity sadly misses the mark. Many of the compositions themselves are good, but in practice they sound very flat. I think this may have to do with the mixing since even set above the sound effects it’s oddly quiet. In cutscenes as well, some lines can be very loud or very quiet so you may find yourself adjusting the volume frequently.

What Edge of Eternity lacks in polish, it makes up for in spades with heart. With it’s fun wrinkles on the ATB system and complex characters, you can tell the developers cared so much. Once you get past the jank and camera issues, this is one JRPG well worth seeing through.

David is the kind of person to wear his heart on his sleeve. He can find positives in anything, like this is a person who loved Star Fox Zero to death. You’ll see him playing all kinds of games: AAAs, Indies, game jam games, games of all genres, and writing about them! Here. On this website. When not writing or playing games, you can find David making music, games, or enjoying a good book. David’s favorite games include NieR: Automata, Mother 3, and Gravity Rush.
Related Articles: Edge of Eternity, Indies
Share
Tweet
Share
Submit