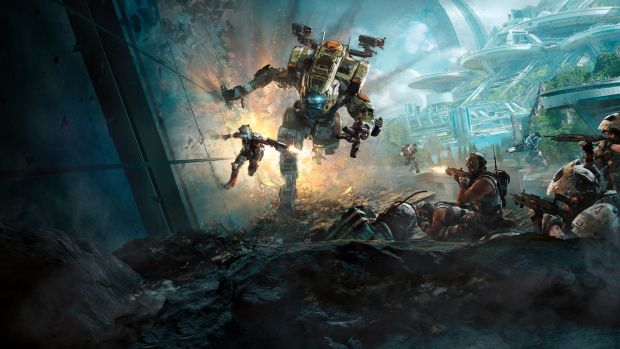 The original Titanfall was a fun but divisive game, with a strong central premise but a lot of complaints about its lasting power and conspicuous lack of a single player campaign. Titanfall 2 is bigger and better than its predecessor, adding a ton of new content and features, including a short but immensely fun single player campaign. While Titanfall 2 is not perfect, there’s a good deal more to work with than it’s predecessor.

Combat in Titanfall 2 has been polished from the previous game, and it shows in every area. There’s a huge amount of variety in loadouts, including different weapons, abilities, and titan choices, so players have plenty of options and chances to experiment to find their preferred playstyle. For the most part, the guns feel satisfying to shoot and are relatively balanced. There’s also a strong sense of progression, as you gain a lot from leveling up. Every match gets you XP, as well as levels with the guns, ordinance, and titans you used. You also gain new camouflage as well, allowing your to further customize your appearance on the battlefield.

Combat also does a great job of merging the two vastly different gameplay styles. On-foot combat is based around parkour platforming and quick gunplay, while titan gameplay is slower and more tactical. Pilots also have abilities based on speed and evasion, such as a grappling hook or a cloaking device, whereas titans have stronger firepower. While a titan will almost always beat a pilot in a straightforward firefight, there are plenty of tactics that put the two on equal ground, like stealing the titan’s batteries or using special anti-titan weapons.

The levels accommodate both types of play, with equal amounts of open pathways for titans and small hideaways for pilots, so neither ever really seems to be too overpowered. While titans have a strategic advantage in open areas, there are always plenty of times where you’ll do better with the added mobility afforded to pilots, such as capturing objectives or trying to sneak by unnoticed.

As for multiplayer, there’s a huge amount of variety between the gameplay modes, including both the standard capture the flag and team deathmatch, as well as several new, creative ones. Amped hardpoint is based around capturing strategic locations for long periods of time, and gaining the most points from them before the round ends. My favorite of the new game modes would have to be Bounty, a mode where you kill NPC enemies for money, then stay alive until you can store your spoils in your team’s bank. You can also steal from the opposing team by killing them as well.

There’s also a lot of versatility in how each titan works, as you’ll have six to choose from. Northstar is your basic sniper class, dealing tons of damage from afar despite being low in health, while Legion and Ronin are more up-close and personal. While all of the titans are useful in different situations, a few of them did end up feeling weaker than others. For example, the Tone titan has the useful ability to provide portable cover as well as an arsenal based around homing attacks, which heavily outclasses most other Titan in open areas. There are also a few abilities the titans possess that don’t quite work, like the Ion’s tripwire, which I have never seen anyone actually activate.

Titanfall 2’s single player campaign is one of its most notable aspects, largely because of the backlash over its absence in the previous game. You play as Jack Cooper, a rifleman for the Frontier Militia who is promoted to pilot following an ambush on the planet Typhon. Together with your titan, BT, you’ll have to escape the planet and return back to base. The result is an exciting journey that’ll take you through exciting firefights and great set-piece moments. A particular highlight is the dialogue between Cooper and BT, which both humanizes your titan and has some really hilarious moments.

The level design of the campaign is great as well. Each chapter of the game has a ton of variety, as well as huge, open levels that let you take full advantage of Titanfall’s signature parkour movement system. The combat also rewards speedy, smart play, to the point where it was incredibly rare for me to spend much time in one place. One highlight from early in the game was the end of the second chapter, when you’re forced to defend a factory while some machinery shuts down before you escape. While that sounds simple enough, you’re pursued by waves of exploding spider drones, which forces you to be in constant movement around the map. The result is a tense, fast-paced shootout as you jump, dive, and wall-run from cover to cover, on the lookout for human enemies the whole time. Other levels use the parkour system to bypass obstacles and enemies, to the point where a lot of enemies can be easily avoided if you move fast enough.

The campaign is relatively short, lasting about five to six hours on normal difficulty, but it’s loaded with tons of ideas and different styles of gameplay to break up the shooting. There are a few levels that require some Portal-esque puzzle solving, and a few that require parkour platforming and stealth over shooting. Sadly, the story isn’t particularly interesting. Basically, if you’ve ever played a military sci-fi shooter, you’ll know most of the twists before they happen.

One particular letdown would be the villains, a mercenary group hired by the corrupt government. The first one you encounter, a narcotics-addled psychopath who makes pop culture references and calls you a “scrub” as he fights you, certainly makes a lasting impression, but the impact is lost when you realize all the remaining mercenaries are similarly unhinged, leading to a lack of variety in their pre-battle dialogue. Not only that, few of the boss fights are much more difficult than the average titan encounter. One particularly egregious example being one mercenary introduced early on, who’s built up as one of the biggest threats on the team, going down in less than a minute on my first playthrough. There’s also a weird tendency the game has to autosave in inconvenient moments, which for me was exemplified by a point where the game autosaved right when two powerful robots had me cornered.

Overall, Titanfall 2 takes the great ideas of its predecessors and expands upon them to create a far superior experience. While the campaign is a little short, it’s still a lot of fun and incredibly replayable.