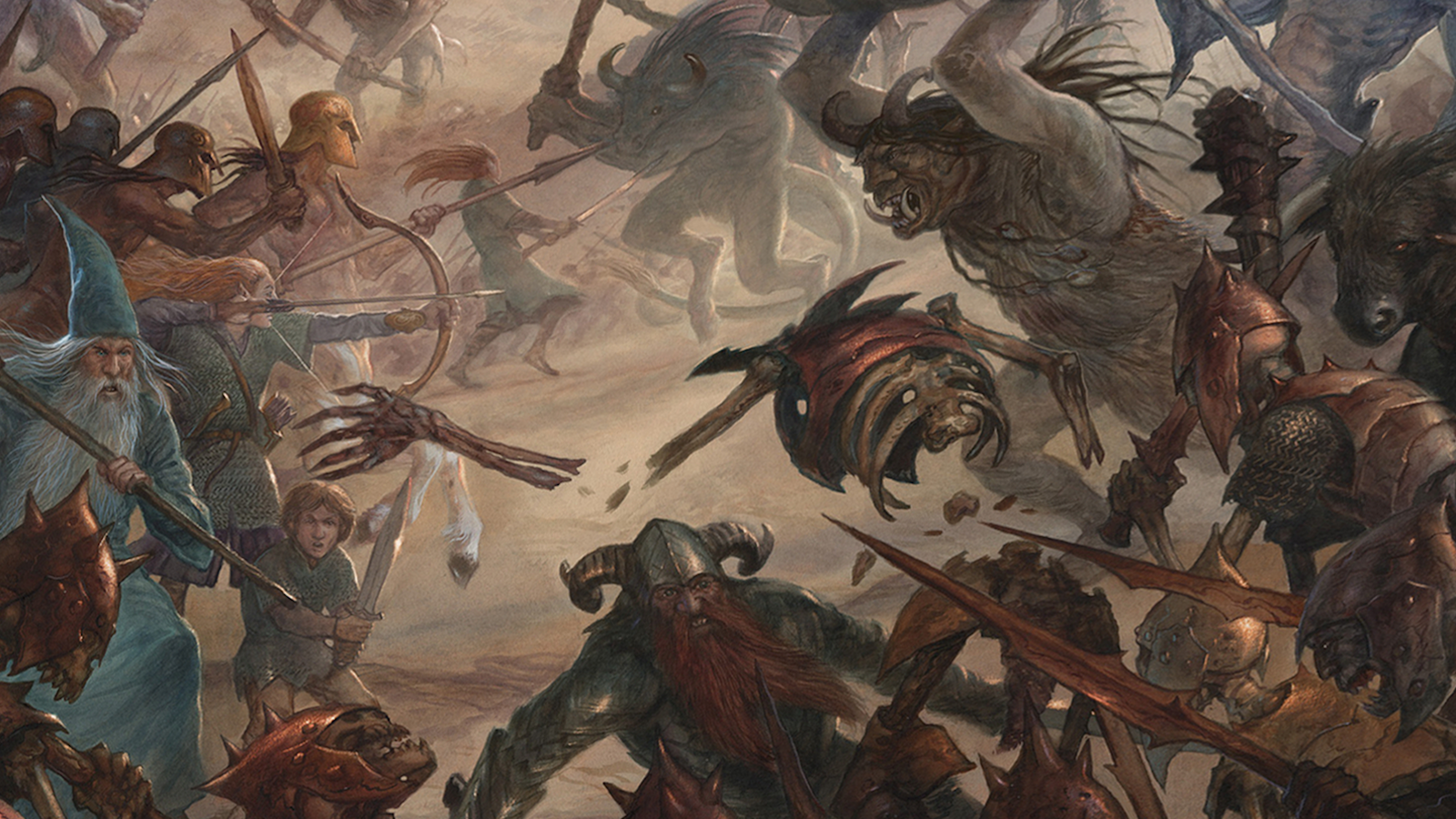 If imitation is the best form of flattery, then the board gaming world is particularly ripe with adulation. The mechanics from popular games often end up in others. This isn’t a bad thing, as borrowing mechanics can add unique spins on other gaming genres. I say this because as I played Ethnos, I found in impossible not to think of other games I played, and at the same time, I walked away from the table with a great appreciation for how Ethnos came together for its own distinct experience.

Ethnos is an area control game, and you’ll use a deck of cards to build sets to add your influence to one of six provinces on a fantasy island. You begin by randomizing which races will make up the deck. All your fantasy favorites, from orcs to wizards to giants, are in there as well as some fresh takes, such as the merfolk (seahorses) and wingfolk (crows).

Only six of the twelve races are used in a game, which provides great replay value, since there are nearly one thousand combinations, and the differences between races are much more than cosmetic. Each race has its own special ability when leading a set, and games feel completely different depending on which races are included in a game. It’s interesting that you are forced to change tactics based on deck construction.

Regions can vary in point value since scoring tiles are randomly distributed.

Once the deck is ready, everyone is dealt one beginning card, and then cards equal to twice the player count are dealt to create a community pile, while the remaining cards form the draw deck. You’ll notice that cards are distinguished not just by race but by color as well. There are six colors which reflect the six colored provinces on the map.

Your turn consists of either drawing a card or laying down sets of cards. You can draw a blind card from the draw deck, or you may take one of the community cards. The community cards are not replenished automatically, so they tend to go fast, since it’s your only opportunity to draw something knowing what you will get.

In order to play a card set, you’ll need to string together cards from the same race or cards of the same color. These sets are called bands (think warbands) and represent your attempts to populate a region. For each band you must designate which card is the leader, which will unlock the special ability for that race only. You will still be subject to luck when drawing cards, but at least you have options on how you play certain sets.

Once the set is played, you add one of your tokens to a region. You can add a token as long as you have played a band that contains one more card than you have tokens in a region. For example, if you already have two tokens in a region, you’ll need to play a band of at least three cards to add another token. This means you can lay just a single card down to put your initial token in an area, but you’ll need to consider more than just area control.

The leader of a band of cards may give you helpful bonuses.

You also score points for the size of the bands you play. One card may score you that first token, but this band is worthless in scoring for size. Larger bands can be worth quite a bit of points, even if you are overpaying for a token. The game also allows you to lay bands down without putting out control tokens. A four card band won’t allow you to place a token in a region that already has four of yours, but you’ll still score the points for the band’s size at the end of the round.

If you are familiar with games such as Ticket to Ride or Rummy, you’ll notice some similarities, but those comparisons are superficial. Dig deeper into Ethnos, and the game is not as straightforward as drawing cards and playing sets. Remember a race’s special ability is triggered when it leads a band, so which race you use will determine how useful that set is in that situation. There are some races that allow you to draw extra cards, save cards, make bands worth more, or even place tokens in any area the band size would let you. Options abound to get the most out of your cards.

Timing also plays a critical element in the game. You have a finite amount of time to gather your cards to play a set. Your hand size is limited to ten cards, and you must draw a card every turn when not playing a set. Once a set is played, any card you cannot use goes to replenish the community pile. You’ll be keeping a keen eye on your opponents for them to play sets in the hopes they must discard something of value to you. Additionally, the game has a built in timer. Three dragon cards are shuffled into the lower half of the draw deck. The round ends immediately when the final dragon card is drawn, giving the game a little push-your-luck feel.

Dominating a region may get you the most points, but it doesn’t guarantee victory.

The game is played over three rounds, and you’ll have a few different ways to amass points. As discussed earlier, you will score based on the size of the bands you played through the round. You can also gain points based on how many tokens you have in each round. At the start of the game, three tiles are randomly placed in each region. These are revealed and rearranged in numeric order. The lowest number represents how many points the region is worth at the end of the first round, and all those points go to whoever has the most tokens there. At the end of the second round, the leader would then get the points for the second highest tile value, and second place would receive the initial tile from the first round. Since the tile draw is random, some regions can contain a plethora of points while others may be relatively barren. It’s another way the game feels fresh each time.

Most of that freshness comes from those divergent races, though some are more powerful than others. Centaurs and elves, which allow you to place two sets instead of one, or allow you to hold cards in your hand when placing sets respectively, are very powerful cards when compared to halflings, who come in droves but don’t allow you to place tokens on the board. However, the game remains balanced as there always seems to be a fair amount of strong races in each play. Still, when normally you share the points when two people are tied in a region, the trolls ability to break those ties can seem awfully powerful in the late game.

If the game has a real distraction, it’s in the overall presentation. It’s hard to ignore that the game feels a little cheap, especially considering publisher CMON Limited’s reputation. The cards feel thin. Cleverly, the tokens do stack, which helps keep the small board from feeling impossibly cluttered, but they can stick together and aren’t the easiest things to control.

I make note to this, but, for me, I completely forgot about this as I got into the game. Ethnos is immensely fun. There’s an incredible amount of replay value, and the mechanics make it accessible to those new to area control games. CMON could have made the game with great production values and slapped on an $80 price tag, and that would have been a shame. Instead, you can get a game that can be played more than once in a game night for under $40. As a complete package, Ethnos is good value for the money.

Ethnos uses simple, familiar mechanics in a battle for area control, but the game’s individuality shines through the use of multiple races and great replay value. You work to build sets to score for set size and to place control markers in territories. The three rounds play quick, and the twelve races each have unique powers that keep the game feeling fresh each time.