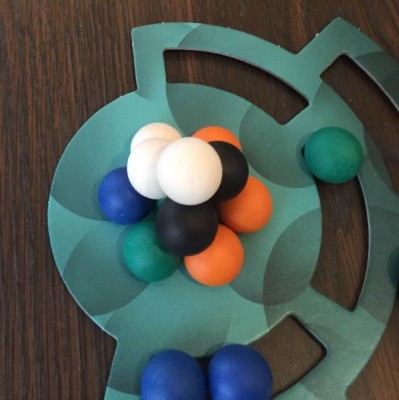 Dimension is a very neat little puzzle that is ideal an ideal casual game: it is simple to understand and a lot of fun. In Dimension, each player will be building a pyramid of spheres according to certain randomly determined rules. Each player will have their own player board which will hold their spheres; there are five different colors of spheres, with three spheres per color. The player board will allow players to stack these spheres, building up to three levels. The bottom level can hold seven spheres, the middle level stacks neatly on top of that and can store three spheres, and the top level fits on top of that and can hold one sphere. However, there are two constraints on the construction of these pyramids. First, the rounds are timed, meaning that you have until an hourglass is empty to build your pyramid. Second, six cards will be drawn which will show various rules for the construction of these pyramids, showing how certain spheres should be stacked in relation to each other.

The rules offer all sorts of constraints on game play. One rule may say, for example, that nowhere in the pyramid can blue and green spheres be adjacent to each other, while another says all orange spheres need to be adjacent to a black sphere and vise versa. Maybe, each player would have to use exactly two white spheres in their pyramid, or each player would need to use more green spheres than white spheres. Finally, some limit where you can place the spheres: maybe white can’t be on top of any other spheres (ie white balls need to be on the bottom row), or blue can’t have anything on top of it (ie blue balls need to be on the top row). Each round, you are supposed to figure out how to build the pyramids according to the six rules that are represented on the six drawn cards. It is possible to draw cards that contradict each other. If this is the case, players may either decide to keep both, knowing at least one will be broken, or discard one card and draw a new one.

Players have until the hourglass runs out to complete their personal pyramid. Once the time runs out, players compare pyramids. Each player receives one point for every sphere they were able to place (for a maximum of 11), but they also lose two points for every rule they break. Players will be able to receive bonus tokens based on whether or not they correctly followed all the rules and/or if they placed at least one sphere of each color. After the last round, these tokens may provide players bonus points if they collected enough of them. Players will then reset their pyramids, discard the current rule cards, draw six new rules, flip the timer, and start a new round. Play lasts six rounds, and the winner is the player with the most points after the sixth round.

Dimension is incredibly simple, so much so that my editor will extremely pleased with the length of this review. Dimension is ideal for casual family gaming groups or casual gaming nights. The rules are easy to understand, and the stacking of the spheres is a fun experience. I always enjoy games where you build something, and players in Dimension feel accomplished when they see what they were able to build. The timer also adds a lot to game play; it adds the right amount of tension in the game and keeps the game quick. Dimension is by no means a ground breaking game, but it doesn’t need to be. It is solid on its own right. On the flip side, this game is not a game that you organize a night around. If you play this game multiple times in a row, it will get much easier. I enjoy it, but it is best suited for a more casual context.

The rules are well thought out, and thinking how to combine those various rules is a fun experience to do under the (gentle) stress of a timer. However, the system for bonus point tokens feels tacked on as an afterthought; it is unnecessary for gameplay. I will not play with those tokens. The components are all great. The spheres feel great and stack easily. The player boards are fully functional, preventing balls from rolling around (although you should be careful when placing the balls on the player boards, or else they might roll around if you simply dump them out of the bag). There are nice rules summaries that each player can take. The tokens are a good quality, but there are simply more tokens than you would ever need.

Starting set up for a round.

I do wish to mention that a session of Dimension does not feel like one overarching game, but instead it simply feels like a series of rounds. It is similar to card games or games of dominoes in which you play to certain number of number of points, rather than to an end game goal. For that reason you could play more or less rounds of Dimension as you please. Aside from the bonus point tokens (which seem tacked on), there is no reason you have to play exactly six rounds. For me, I like being able to play the game as much or as little as I choose, so this is not a con for me. However, people who are looking for a more unified gaming experience that feels like a “complete game” may not find it here. Similarly, based on the cards that are selected, some rounds will be much easier than others. Since players use the same cards to build their pyramids, there is no issue of balance, but there is potentially an issue of pacing. Yet, if you are not satisfied with a round, there is nothing stopping you from playing again. Ultimately, I would recommend Dimension. It is great especially for anyone looking for a light puzzle game with a nice timer for their casual gaming group.

Dimension is a great little puzzle game that is easy to learn, fast playing, and a lot of fun. It is an ideal game for anyone looking for a lightweight game.