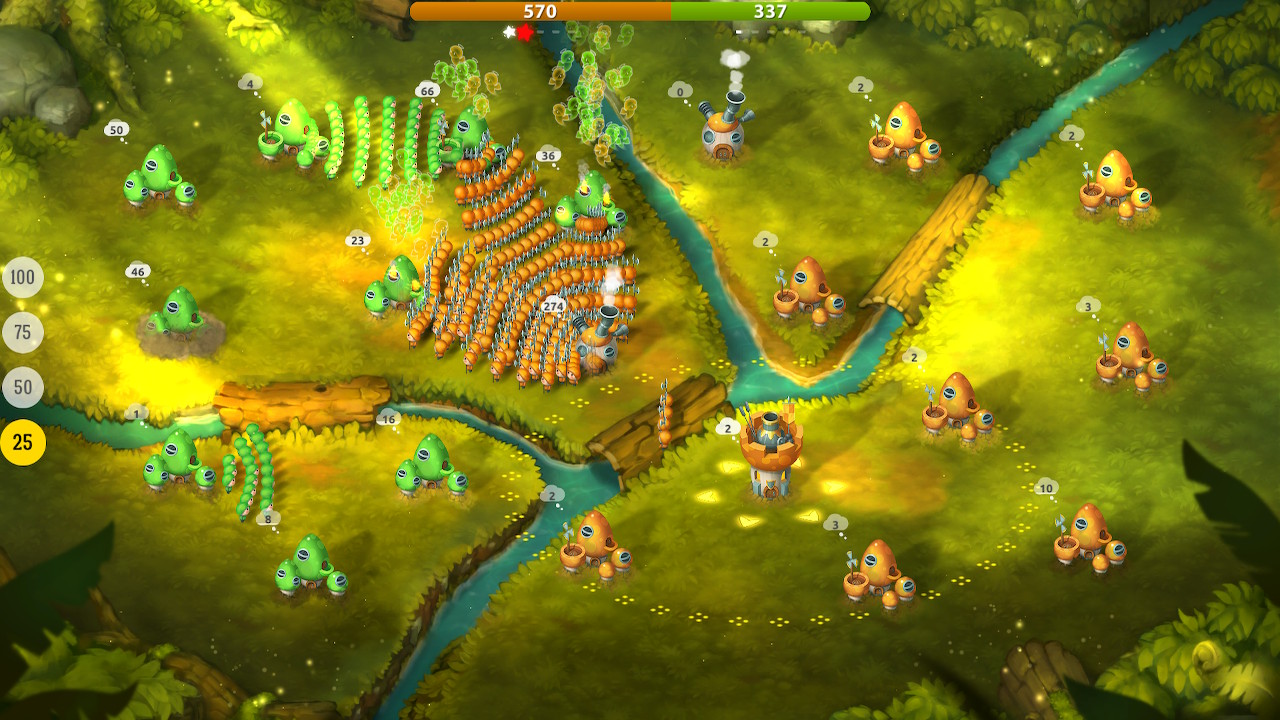 When it comes to war, strategy can make or break a victory. That fact holds true in Mushroom Wars 2, as you must command your forces in order to take control of the battlefield.

Mushroom Wars 2 is the sequel to the real-time strategy game Mushroom Wars. Mushroom Wars 2 released on PC awhile back, but it has made its way to the Nintendo Switch. This offers gamers the chance to take this franchise on the go if they so choose.

As stated earlier, the gameplay centers around commanding your forces in battle. Depending on the specific level, you start the battle with one or more mushroom villages, along with a designated number of soldiers that occupy these villages. Your opponent starts off in a similar fashion, although there are times when they have a clear advantage; they may have more soldiers or more occupied locations. In terms of controls, the R and L buttons are the most important. In order to control your troops, you must hold R, and then click A on the building you want them to move to. Holding L brings up a menu allowing you to either change a designated building into a different building or upgrade it instead. You can also double click B while hovering above a building in order to upgrade it.

There are three types of buildings you can have: villages, towers, and forges. The villages slowly create soldiers, and as you upgrade a village, the speed of creation increases, as does the amount of soldiers it can hold. A village can hold an infinite number of soldiers if you send them there, but it has a limit to how many it can create to hold at once. Towers have a radius that they will attack all enemies within, and upgrades extend that radius. Forges increase the attack and defense of all units, and the more forges you have, the greater the bonuses. The villages are the only buildings that create units, besides some special buildings that only appear in certain game modes.

The term morale is pretty common when referring to a team or unit, and it actually comes into play during battles. Morale affects the strength of your soldiers, so you’ll want to do what you can to boost it. How do you boost morale you ask? As you successfully upgrade, capture, and defend buildings, your morale gets a bump. When you do well enough, you’ll get a star indicating a morale boost. You can get several stars, which further increases your army’s strength. On the flip side, losses will decrease morale and weaken your army. It’s interesting how this aspect functions almost like it does in real life. It’s a nice touch, and it gives you an extra incentive to perform well.

In addition to controlling soldiers, there are also hero skills. Based on which hero you pick, the skills you have available will vary. Every hero has four skills which become available for use as you gain energy. After building up enough energy, the first skill becomes available. If you don’t use that skill, you can build your energy enough to unlock the second skill, then the third, and the fourth. The earlier skills use less energy, so you need to think carefully about what skills you want to use, and when you want to use them. You get energy from your units dying and as time goes on. In a sense, it seems like this is designed as a sort of comeback feature. Skills have a variety of effects including increasing the defense of a building for a short time, boosting morale, setting a temporary speed boost, fire-bombing an area, and more. If used correctly, some of these skills can turn the tide of battle. The downside to this is that your opponents have their own set of skills that can wreck you as well. Even so, they are a really fun addition, and they keep the matches interesting.

Soldiers getting their speed boosted

Another aspect that keeps things interesting is the variety of modes available. You can play conquest, domination, and king of the hill. Conquest involves capturing all of the enemies’ buildings, domination focuses on capturing all of the special buildings on the map, and king of the hill revolves around holding special buildings in order to make a total count down to zero. Based on the specific goal, your strategies may change, and you’ll definitely need to learn to adapt. If you can’t adapt to your enemies’ moves, then you won’t last long before getting wiped out.

Mushroom Wars 2 can be enjoyed single player and multiplayer. The campaign consists of two chapters, made up of 50 missions each. The story of each chapter is told through images that occasionally show up after completing certain levels. For example, chapter one starts with a mushroom man relaxing at home when a dead mosquito comes crashing through the window. Based on a framed picture nearby, this mosquito was the pet of this man’s father. This seems to indicate that the owner has been taken or killed by somebody. This prompts the man to wield a sword, and take to the field of battle in order to make things right. Unfortunately, there’s no dialogue, so there’s a lot left up for interpretation.

Many games have boss battles, and Mushroom Wars 2 is no different; although they aren’t typical boss battles. They play like normal matches with the inclusion of a boss that interferes. For example, the first boss battle is a conquest match with a frog near the middle. Whenever soldiers pass through the middle, the frog sticks out its tongue and eats anyone it catches. The tongue moves at a decent speed and rate of fire, so to speak, so you need to be careful. Unfortunately you have to pass through the middle in order to take over the buildings on the left side of the map. This setup ensures that you must deal with the boss, which I appreciate as an extra challenge.

Multiplayer is a feature that many gamers look for when buying games, and Mushroom Wars 2 doesn’t disappoint. You can play against bots or your friends if you want to take them on. Matches can be one on one, a three way free for all, a four way free for all, or even a two on two battle. More players means more opposing sides, which creates more chaos and tension. Needing to be strategic and plan your moves during this chaos is tough yet entertaining. Having more than one enemy to face at once means you need to be careful, because making a move on one opponent can leave you open to attack from a different enemy. Mushroom Wars 2 handles this well, and creates fun-filled matches as a result.

Mushroom Wars 2 is an entertaining real-time strategy game that combines a cute world with tense battles. The variety of game modes combined with hero skills keeps matches fresh and engaging, and the campaign has plenty of missions that will keep you playing for hours. The campaign alone gives players a ton of time to practice and improve upon their skills, which they can take with them into multiplayer matches as they prove their talents as a commander. Soon enough, you’ll be leading your armies into many victories.

Mushroom Wars 2 is a challenging yet fun real-time strategy game that focuses on battles between mushroom people. The gameplay takes a minute to get used to, but once you get acclimated, you'll be killing it. Hero skills are a cool addition that can turn the tide of battle if used correctly. There are a ton of missions that will give you hours of playtime.

Codi loves to play video games and watch movies. He will watch almost any kind of movie just to experience them. His ideas take inspiration from the shows and movies he watches, and games he plays. He also loves a good pun.
Related Articles: Mushroom Wars 2
Share
Tweet
Share
Submit