Much like rectangles are not always squares, tabletop games are not always boardgames. What is often overlooked by boardgamers is one of the cornerstones of modern tabletop gaming: the card game. Card games, especially of the collectable variety, have been a driving force in the industry ever since 1993 when Magic: The Gathering was released to the world. Nothing quite feels the same as carefully building a deck and watching how it plays out against another player’s custom creation.

The Spoils is a collectable card game set in an odd and comical universe where anthropomorphic beings use whatever resources they can to fight for influence over their enemies. The Spoils has been slowly building up their card base over the past eight years as they establish their game. What is yet to be determined is if you are the one being spoiled, or if you are spoiling away.

The basic goal of The Spoils is to reduce your opponent’s influence to zero. This is done primarily by attacking your opponent with various characters and utilizing a wide array of tactics to further your goal. The world of The Spoils is made up of five different factions which all have distinct elements and play styles. Ranging from the Warlords to the Bankers, each faction relies on its own unique type of resource to cover the cost of characters and various other cards.

On a players turn, a choice must be made to either draw a card or play a resource. This resource can be a face up resource card or any other card to be played face down as a resource. After this initial choice, players are free to perform the rest of their turn in whatever order they see fit. Turns mainly consist of playing cards and attacking.

The attacking mechanism for The Spoils offers several different aspects than other card games. First, a player may choose to attack in any order, and in as many distinct groups as they would like. This allows for some rather creative play, as opposed to forcing one single attack on a given turn. In addition each character has a speed trait that determines when it will deal and receive damage. If a fast defender is able to deal enough damage to take out a slower opponent, that slower character will be removed before it can do any damage.

I specifically received the Basic Box of Awesomeness to review. This starter set contains a starter deck for each of the five factions, along with some other special foil cards and basic rules, all in a fancy storage box. I was impressed by the distinctive feel and style of each of the five factions. The boardgamer in me wanted some tokens to be included, as there are plenty of cards that require non-included markers to keep track of various things.

It is very easy to compare The Spoils to Magic: The Gathering, but there are some marked differences. Sure, influence and health are indistinguishable and every character has an attacking and defending statistic; but from there the two games diverge. I was very impressed with the speed mechanic in combat. This hierarchy of damage leads to some very interesting and unexpected choices. I also particularly enjoyed the potential use of every card as a resource (mana, for you MTG fans). There is no excuse for not being able to play your expensive cards by turn six of seven.

But there is about the end of what I enjoyed.

I was surprised to have to work through the clunkiness of some of the cards. A significant portion of them required multiple read throughs to figure out what the card was supposed to do, and then a few looks over the rule glossary to finally clarify what is going on. The most confusing aspect was how the keywords interacted with the rest of the text on the card. In general, The Spoils feels incomplete, almost as if the designer was rushed to get the game out the door. A little more refinement could go a long way. 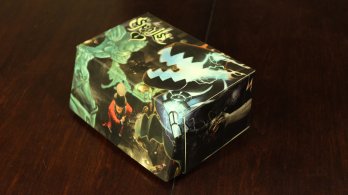 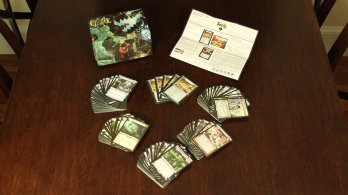 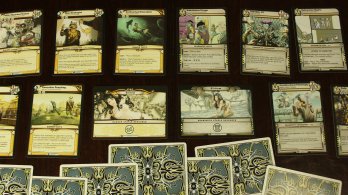 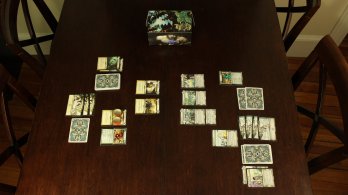 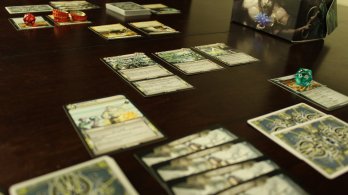 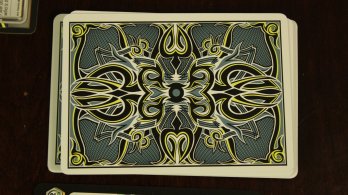 Speaking of text on the cards, the designers took the use of flavor text rather liberally. Each card has a sub title or sub phrase that is sometimes tied to a short line or two of flavor text under the gameplay text. The flavor added turns up to be bland, with an odd mix of in-jokes that I could not understand and poorly formatted phrases that don’t add to the theme.

My biggest complaint about The Spoils is the theme, and more importantly the art work. While there are some notable gems in the rough, the majority of the theme is the type of low brow humor that I remember from middle school. Take MAD magazine and mash it with a handful of underground comics, pepper in some immaturity and you have the base for The Spoils. This ranges from borderline female nudity and jokes about sexuality all the way to uber violent scenes like playing golf with a decapitated head. I am grateful that my wife found it pitifully humorous as opposed to lighting the deck she was playing with on fire. This alone cuts down the people I would recommend this game to even if the rest of the game was up to par.

After playing through the different factions contained in the starter set, it was obvious that little attention was given to balancing the five factions. During some of the games I would sit there and watch as my best cards were thwarted by the common cards of my enemy, only to be decimated by their powerful cards. I don’t know if this is a systemic problem with the whole card base, or if it is just a problem with the included cards in the Box of Awesomeness. Only an extended study of the entire The Spoils system would show if this is indeed the case.

While The Spoils introduces some interesting variations on traditional card game mechanics, the theme and art are a major turn off. It seems as though the game is targeting thirteen year old boys with the abundant crude humor and graphically violent art. Ignoring the art, The Spoils leaves something to be desired with less than polished gameplay and suspect card balancing. If you are looking for a new collectable card game, look somewhere else.