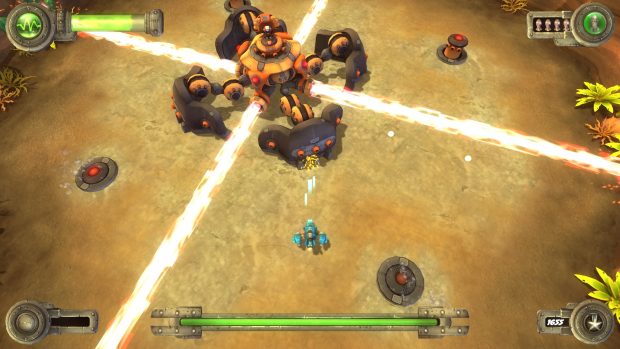 Blue Rider feels a lot like a game from the arcade era, when a game’s difficulty curve was based on how fast quarters could be spent rather than how one could be challenged.  It’s a simple, easy to pick up twin stick shooter with a few new mechanics, but due to some questionable choices, it’s also incredibly difficult.  While difficult games are something many players crave, Blue Rider’s level of difficulty, along with some bizarre control issues, will turn off a lot of players.

When I turned on Blue Rider for the first time, the first thing I noticed was how barebones it felt for a full $13 release.  The menu only has a level select and the briefest of tutorials, and there are only nine levels.  While the levels themselves are relatively short, to the point where beating the game in its entirety would likely take less than an hour, you’ll end up spending a lot more time due to the game’s difficulty.

There aren’t a lot of changes made to the standard twin stick shooter formula, with one questionable exception:  turning the ship also turns the camera, something uncommon in a genre that generally sticks to the tried and true fixed overhead camera.  After playing Blue Rider, I can definitely understand why most games make this decision.  Because the game also takes a lot of cues from Japanese bullet hell shooters, you’ll find yourself whipping around in circles quickly, which can be very disorienting.  It takes a lot of getting used to, but once you do, it’s manageable.

The game looks good visually, but the enemies all feel identical.  With the exception of a few colorful mid-level bosses, most behave the same way and have the same attack patterns, with the only real difference being the hits they take and the number of shots they fire.  While it’s fun when there are a lot on screen, you’ll generally only end up fighting them in small numbers.

As I’ve mentioned earlier, Blue Rider is an infuriatingly difficult game.  There are nine levels in total, all fairly lengthy, and none of them feature checkpoints.  Not only that, but health pickups seem to be one of the rarest enemy drops in the game, meaning that any damage you take in the beginning of the level will no doubt carry over to the boss fight.  Not only that, but defeating a boss won’t grant you enough health pickups to top of your health bar, dropping you at the beginning of the next, more difficult level will half health and all your special weapons depleted.  Unless you’re going for a high score, there’s really no reason that you won’t want to restart to the main menu and select the next level from their.  On the subject of high scores, there’s no online leaderboard, so score really doesn’t matter anyway.

The levels themselves are fun, and have a lot of variety visually, but you’ll lose a bit of patience with them after your fourth try.  The game is difficult enough without the lack of checkpoints, and dying to a level’s boss for the fifth time only to be sent back to the very beginning will eventually make you lose interest very quickly.

If there’s one thing Blue Rider does right, though, it’s the boss fights.  Each one is a unique challenge, with interesting arena layouts and attack patterns.  They’re also the most visually interesting enemies in the game, taking inspiration from different kinds of insects and such.  That said, while the boss fights are fun, they generally aren’t worth the dull slog through the same boring enemies required to reach them.

While the core gameplay is at least somewhat solid, Blue Rider doesn’t have a lot of content or any particularly nifty features to help it stand out amongst its competitors.  Unless you love Twin stick shooters and are really, really itching for a challenge, give this one a pass.