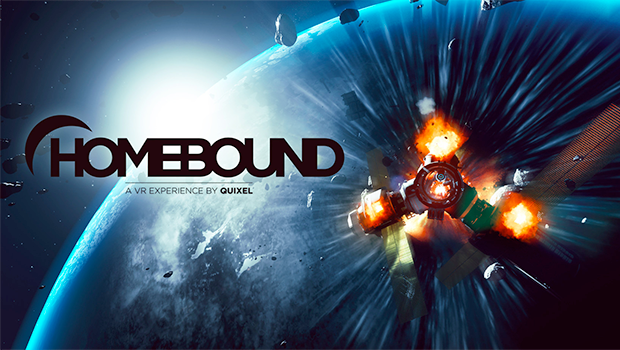 What child hasn’t dreamed of being an astronaut? As a kid, I would sit out under the stars at night with maps of the constellations, trying to pick out the space station Mir among them. Life onboard a space station is the ultimate adventure of the 21st century, the end-all adventure of leaving our home planet and breaking free of gravity itself. Homebound, described as a brief, intense virtual reality experience, allows you to experience all the joys of life in zero G, along with a healthy dose of the trials and terrors that come along with it.

Upon donning a visor and staring up the game, you find yourself alone with the space station computer, having just awoken from a nap. The computer acts as both guide and narrator, instructing you on a few chores and helping acclimate you to the layout of the space station. “Helping” is something of a relative term, as I really did feel as if I had awoken on a space station, having missed all of astronaut training, and the computer was doing its best to hold that against me.

Space stations do not have the most cozy of living spaces

As an example, the computer tells you that a sensor is malfunctioning and that you need to go poke it. It marks the location on your heads-up display, and off you go. Simple, right? Well, the area marked on the HUD is actually a hatch with a light above it. I spent quite a while poking at the light without any success before realizing that the computer actually wanted me to open the hatch, enter another section of the space station, and poke a sensor inside that area.

This vague instruction is compounded by the game’s clunky object interaction. After having experienced how easy it can be to pick up, use, and interact with objects in games like John Wick, Homebound feels difficult, even glitchy at times. I would be able to grab onto a lever, but it would take me three or four attempts to actually move it. At one point, I was instructed to gather some floppy disks but was not told what to do with them once I had them in my grasp. After some experimentation, I found that I was supposed to ‘tuck’ them up against my body, which would put them safely away. However, on more than one occasion, I’d grab a disk, tuck it away, then move to the other end of the capsule and turn around to see the disks floating where I had been moments before.

Homebound quickly turned into a vomit comet, which kept me from experiencing re-entry

Homebound’s largest problem, without a doubt, is how quickly it can turn into a vomit comet. It tries to simulate the feeling of a zero gravity environment by putting you into a slow, lazy spin whenever you turn your body, but since the game makes no distinction between turning your head and turning your body, it’s all too easy to see something out of the corner of your eye and suddenly be spinning one direction while your stomach wanders off the other way. You can fairly easily compensate for this by turning your head quickly the other direction then back to center, but one too many unexpected twirls caused two of my VR veteran friends to swear off the game entirely.

Now that I’ve discussed its shortcomings, there is something that I need to say about Homebound: Looking out the viewport of the space station and seeing earth spread out before you is a truly profound experience. I spent a solid fifteen minutes gawking out the window, peering out at the sun peeking over the horizon, how the electricity grid lit up the dark side of the globe, and watching satellites spin whimsically between myself and my home planet. Even knowing it was virtual reality, it was a humbling experience, it made me feel very introspective and small, and it had a similar impact on others.

The view of Earth from the view port is profoundly powerful

It’s hard to balance how incredibly touching that one element of the game is with the rest of the experience. While Homebound is not terrible, simple tasks can be frustratingly challenging and lacking in polish. The space station is a bit of a mess, and it’s a lot of fun to explore, especially when the computer decides to get sassy. There’s a lot of funny little gems hidden within the small space, if you are able to tear yourself away from the viewport. I found that I much preferred using the freestyle mode, where I could simply explore and poke around, rather than playing the actual story mode of the game.

In the main game mode, as the title suggests, you do not remain a resident of the space station long, and you will need to navigate a series of crises, leave the space station and re-enter the Earth’s atmosphere. While I’d love to talk more about how incredibly intense this part of the experience is, I could never get to the end of it, but not for lack of trying. No matter how many times I steeled myself and donned the visor, motion sickness got the better of me before I could reach the end. Out of the four of us who tried to play out the entire experience, not one of us was able to stomach it all the way to the end. While I have never experienced zero gravity nor the sensation of re-entering a planet’s atmosphere at a high speed, I have zero doubt that Homebound does a beautiful job of recreating those sensations, but as a friend said while ripping off his visor and clinging to a door frame to try and stave off the spinning: “If I wanted to know what that was really like, I would have gone to space camp.”

Homebound is a virtual reality experience best saved for the daredevils and veterans of VR. Its controls are clunky, it has a habit of leaving you spinning in the most gut-wrenching of ways with little to no warning, and its story mode instructions can be frustratingly obtuse. That said, it gives you the opportunity to experience life on a space station, and gazing out the viewport can be a shockingly powerful experience. It's difficult to resolve these dichotomies, but at the end of the day, I felt that the experience it offered was more than worth its $8.99 price tag.