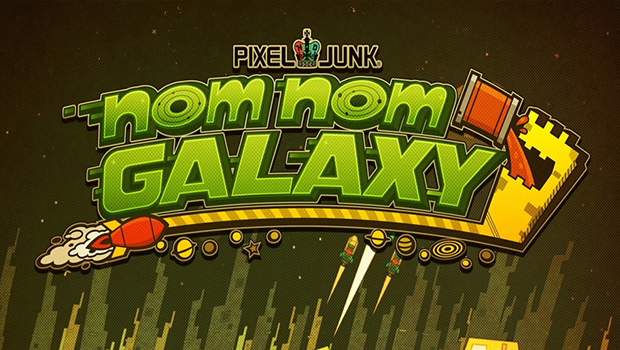 Soup is good, and I enjoy it every now and then myself. That being said, I have never thought I needed a video game based on a galactic soup takeover. Nom Nom Galaxy is a strategy game based around soup, and becoming the biggest soup maker in the universe. Combining tower defense building, exporting, and exploring it brings a lot with it, but is it any good?

The first thing people will likely notice when they enter Nom Nom Galaxy is the very simple and retro-like graphics. It has a basic and classic look and nothing stands out as particularly pretty. I have never had a problem with retro style games, and even have a place in my heart for them, but with Nom Nom Galaxy, I never enjoyed the art style or visual direction they went with. Everything is clean and not muddled, but at the same time, nothing stands out at all or makes me think anything looks very nice. The graphics are just mundane and ended up not feeling unique or original. They are well done but just don’t stand out to me as anything special. Unfortunately the sound plays out in the same way.

The audio in Nom Nom Galaxy is more polished than the graphics but fails in many of the same ways. It is well-done and the soundtrack sounds like something from the Super Nintendo age (in a more nostalgic and overall better way than the graphics). It has a very relaxed electronic vibe and the bleeps and bloops of fighting and your ship crashing feel fun and arcady. It works for its purpose but never goes beyond that. The cutscenes are just standard robot noises (as the person leading you is a robot) and the creatures and items have different sounds, but it is underwhelming. The sounds just fit but never stand out or have any lasting effect. They serve their purpose well, but don’t expect to be jamming to the soundtrack in your car.

The controls are where things really started to go downhill for me however. The controls are simple, much like a platformer. The problem being they are not very responsive and lack refinement. I constantly found myself repeating the same jump numerous times just to get my character to move where I needed him to, and it got frustrating after long play sessions. You also cannot rebind the control keys, and pressing Alt and W to build a ladder or Control and Down to delete a building became annoying and overly complex for a game that is simple at heart. Most of the challenges I faced were fighting or remembering what controls did what, and trying to move around the map without ruining what I was trying to accomplish building-wise. Luckily the controls do start to feel better after a few days use and I could overcome my hatred for the looseness of the overall control scheme and enjoy the game a little more.

The gameplay in Nom Nom Galaxy is great in some areas, but really lacks an overall vision. The goal is to explore, find, and bring back ingredients to make soup. You do this by looking for ingredients and combining them two at a time trying to discover the best recipes. After you combine the soup in the soup-maker you send it off in a rocket to other planets. The more soup and better the recipe you make adds to your overall market share. The goal is to get 100 percent of the market share to move onto the next planet. When you get enough of the market share, other soup companies may launch an attack on you. This is when the tower defense portion starts. You must build turrets and fight to keep the other soup-makers at bay and not ruin your factory. This could’ve been a fun and unique mini-game but it fell flat. There are not many options on how to defend your factory,and to be honest, I never really enjoyed it. I did it simply so that I would not have to backtrack or rebuild areas, but never took pleasure in the actual fights. The turrets did most of the work and I never needed much of a strategy other than “place turret here” or “punch this.” Building my factory, however, was a challenge and a joy. In a very Terraria style you have to plan out your factory and build it to be productive. By the end of the game I had multiple floors, robots, and conveyor belts all running in unison to create a synergetic production floor that made, canned, and flew soups to other planets. This was the best part of Nom Nom Galaxy and actually gave me a feeling of gratitude over the work I had accomplished.

The exploring portion also felt good overall. Going around to different planets to set-up factories and increase my market share was a good time. Each planet is different and has challenges, unique terrain, and different ingredients to find and combine in new soups. I really enjoyed digging around and finding the ingredients, while planning what the best areas and ways to get those ingredients to my factory were. Making tunnels, ladders, and finding new areas never felt like a chore, except you must fight and kill creatures to get certain ingredients, and the fighting involves nothing more than clicking on the creature. There is no real combat system, but that aside, the exploring and planning really stood out and was not only polished, but well executed on the development side.

The game plays out in five minute increments that represent one day. If you do not get your market share up to 100 percent, you start the next day. At the end of the day a spreadsheet shows up and gives a listing of achievements and how you did overall. If you don’t hit 100 percent you start the next day and continue to gather and create until you conquer that planet. Each planet has its own layout and challenges, and as you unlock upgrades the complexity and challenge of Nom Nom Galaxy gets increasingly harder. With the environmental puzzles and complexity near the end of the game it becomes gratifying to win and really makes you think without ever feeling impossible or too hard.

One massive downfall of Nom Nom Galaxy is the writing. Whether through cutscenes or in newspaper clippings it never feels fun or clever, which given this is a galactic soup takeover game, I would’ve liked some more humor and randomness in the writing. The story is extremely simplistic and other than the gameplay nothing drives you to keep going.

Nom Nom Galaxy is a game with some fun gameplay and a unique setting, but its technical problems really hold it back. A few cups of Nom Nom soup is all it takes before it feels stale.

Growing up in a small Colorado town, Bryan has always had plenty of time to play games. PC is his first choice of tech followed by the PS4. Graduating at 16 Bryan knew he wanted to be a writer and wanted to combine his love of games into that and found Gaming Trend in 2012 where he quickly became a member and started writing for them as soon as he could. He is still at Gaming Trend, but now has 2 kids, a puppy, and a lot less time to play the games he loves, but he always finds a way to get back into gaming.
Related Articles: Nom Nom Galaxy
Share
Tweet
Share
Submit