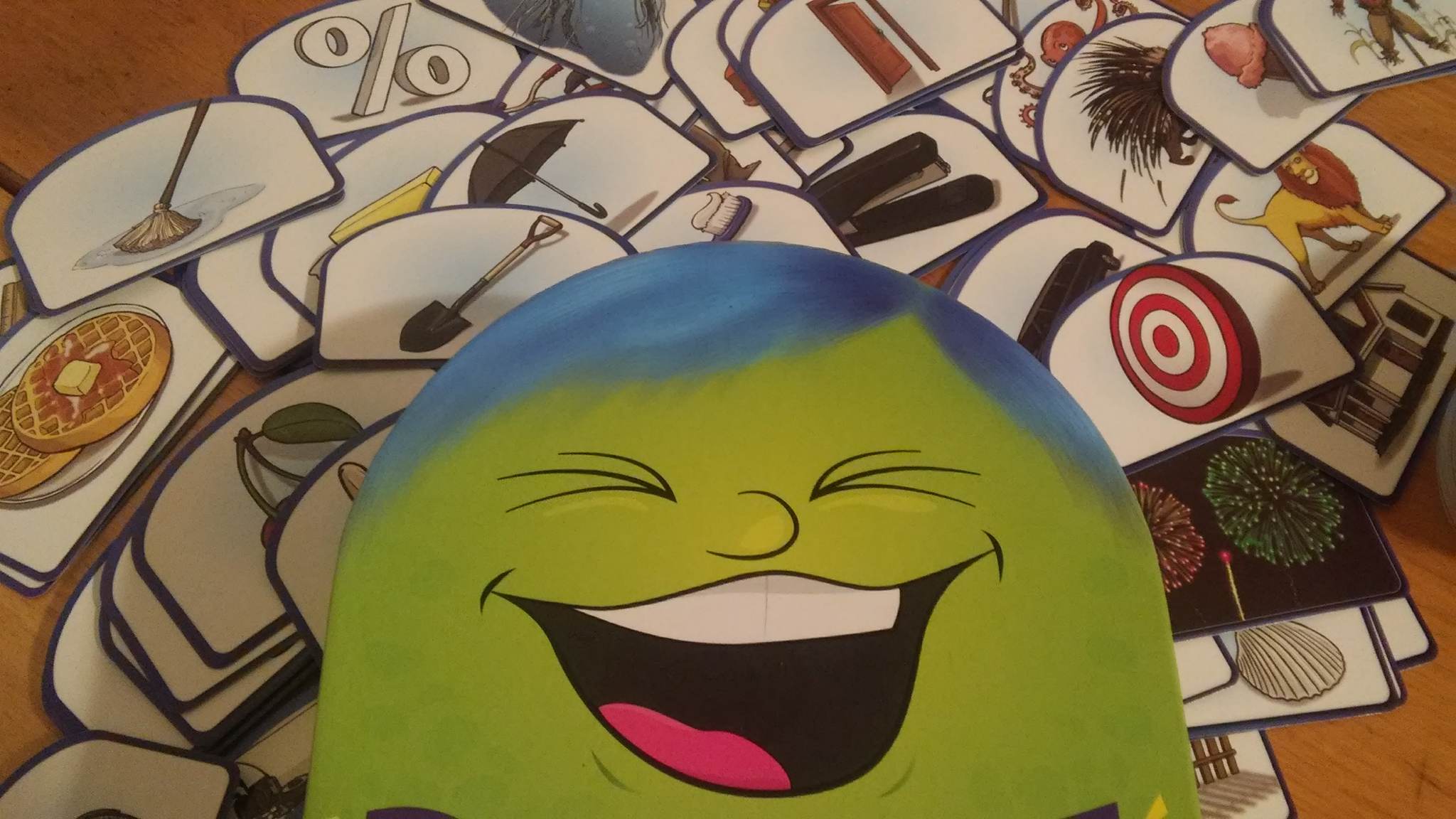 Blurble is a game of words and shouting, and there is something attractive in that directness. There isn’t anything deep in this game, but depth isn’t its goal. The purpose of any true party game is to be approachable, lighthearted, and whimsical. Blurble achieves all three of those things, but with maybe less flair than its contemporaries, even some from its own parent company. Simplicity is often the chief hallmark of a party game, but in Blurble, that simplicity can sometimes feel like a limitation.

Any game of Blurble will sound from a distance like a cacophony of random words shouted gleefully across tables as random symbols fly into the air. It will sound that way from up close as well, but with a little more context to clear things up. The concept is to test your ability to think quickly, and not trip over your tongue while doing so: Blurble is made up of 348 cards, each of which have a different picture on them, from macaroni to unicycles to crutches, and a surprising range in between. During the game one player (the Blurbler) will flip over one of these cards and shout out a word that begins with the same letter before their opponent, the victor receiving the card as a victory point. The Blurbler will then repeat the process with each other player. You play until everyone has gone through the Blurbler process twice, or once if you are playing with 7 or 8 players. There are a few notes on what words are or are not legal, but the most salient of these is that once any word has been used, no one can use it again for the rest of the game.

Rest assured, this deck is massive

After reading the short instructions you are ready to jump into the game, so have no fear of lengthy rules explanations that might keep friends or family away from playing. That simplicity is welcome, but also what keeps Blurble from having any real depth. While the gameplay is fast-paced and fun, there just isn’t much there to draw you to it. You will be engaged while you play, testing your wits with each card, but that test is limited. Similar games range across different categories or trivia, where Blurble relegates itself to objects and letters. Over the 15 or so minute playtime it can wear thin, and make you question how many times you want to pull the game out again. There is a danger during replays that you will rely on the same words the longer you play, but I have found that requiring a new word with every subsequent play makes for a different type and quality of challenge.

Brevity is not necessarily a weakness. Happy Salmon, by the same team, is a minute long, and one of my favorite experiences in recent weeks. However, Happy Salmon’s simplicity is couched in the package of a shorter activity. It’s in the ten or so minutes that it takes to play through a game of Blurble that you find something more involved would be appropriate. It also has the weakness of involving only two players at any given time as opposed to everyone, even if that time is very short.

To be fair to Blurble, it does offer some alternate rule variants to help make it feel more useful. King of the Hill makes the winner of each race become the new Burbler, and whoever wins 10 total races is the victor. The Thief allows more players to be involved, letting them steal a race if one of the racers uses in illegal word. The Brainiac asks you to come up with criteria to use to limit the words, such as making them all be two syllables or six letters. I appreciate these additions, which go directly to some of my criticisms of the game. What they don’t do is change the fundamental engine in a way that really expands Blurble into something that I would think of as a full game. A party game doesn’t have to be complicated or long, but it does have to have a hook that keeps me coming back.

Blurble doesn’t only see itself as a party game. Its instructions also suggest that you use it as a teaching tool for children, getting them to recognize objects, expand their vocabulary, and train their knowledge of the alphabet. It splits up possible ways to use the game into different ages and skillsets, such as spelling or pattern recognition. I have long felt that games have a place in teaching, and it warms my heart to see such care put into adding to Blurble’s design to help families connect. It also means the game, if used this way, could have incredible longevity as you reuse it over different phases of your child’s life. Sadly, this is one area where I don’t feel qualified to really discuss design. I have taught language (albeit very briefly), but I wasn’t able to use this game with anyone, not having children of my own. I am confident that it might be a good way to use the game, but I cannot rightly say that I have the experience to back that up.

Those cards are the only component, so it’s nice that they stand out so well. Each of them has great art design and detail, but not to the extent that you would ever doubt what they are meant to depict. Moreover, because there are so many of them, you can play through the game multiple times before having to worry about seeing the same material.

Nothing in Blurble is actually bad, merely constrained. The problem here is less with what the game does as with what it doesn’t do, and what it does is effective. It’s fun, it’s cheap, and it’s an effortless way to get people engaged with one another. It just isn’t anything more than that. Its utility as a teaching tool for children is also an incredibly thoughtful way to make it more than just a fun experience.You will have fun during your playthroughs, but the kind of fun that you also feel could be supplemented, deeper, and more replayable. There isn’t much to think about with Blurble, or much reason to revisit it, and I don’t think I will be doing much of either.

Blurble is a quick, tense way to connect with friends and family members of all ages. The game works hard to include younger players, and help them learn language themselves. It’s only a shame that the core of the game is so simple; optional rules help add variety, but only to a limited degree.

John Farrell is a legal aid attorney specializing in domestic violence, living in West Chester Pennsylvania. You can listen to him travel the weird west as Carrie A. Nation in the Joker's Wild podcast at: https://jokerswildpodcast.weebly.com/
Related Articles: Blurble, Tabletop
Share
Tweet
Share
Submit