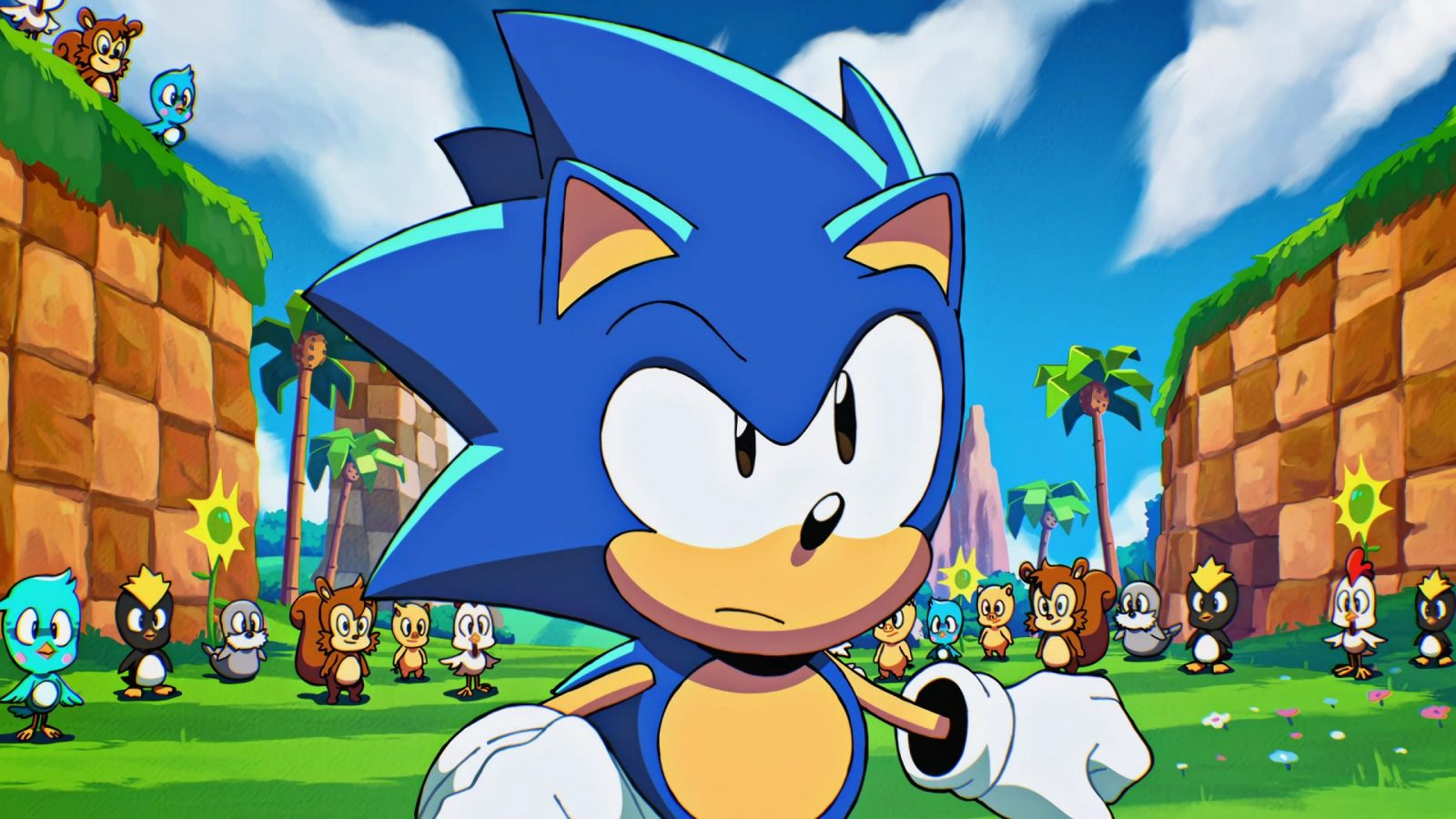 Sonic Origins review — The past never looked so bright

Sonic’s first four games on the SEGA Genesis are absolute classics, though these days we’re spoiled for choice on ways to play them. Sonic 1 has been rereleased so many times you can only really go wrong with the GBA port, Sonic 2 has at least 3 ways to play it on the Switch alone, and Sonic CD has an excellent PC port. You may notice an odd man out from that list: Sonic 3 & Knuckles – the only modern rerelease I can think of being the emulated PC version on Steam. Sonic Origins seeks to remedy this problem and more by providing a modern way to play all four games in full 16:9 widescreen with a few extras for good measure. While it has a few issues, mostly having to do with the original games’ design, this is the best way by far to play these classics.

Upon starting the game up for the first time, you’ll be greeted by a delightful animation of Sonic, Tails, and Knuckles jumping out of the Sonic 1 logo, with a few highlights from the included games too. These animations are gorgeous and serve to introduce and connect each game together in one cohesive adventure. Don’t worry though: the Sonic CD intro hasn’t been touched – with either JP or EN audio – and still remains one of the best things in the franchise. Each cinematic is only a few seconds long, but they’re all incredibly charming and give each game a bit more life.

In the main menu, you have several headers and underlying modes to choose from, each accompanied by a cute diorama style island. By moving left or right, or choosing from an overhead map, you can choose from Sonic 1, Sonic 2, Sonic CD, Sonic 3 & Knuckles, a Museum, and Mission Mode. In each of the games, you can play Anniversary Mode, which has updated features like 16:9 aspect ratio, unlimited lives, and the drop dash from Sonic Mania, Classic Mode, the original game with 4:3 aspect ratio, Boss Rush, where you fight each boss in a row for Coins, and Sonic 3 also has a mode for the Blue Spheres challenges including completely new stages. Beating a game will unlock Mirror Mode, in which the game is mirrored left to right.

The Museum allows you to spend Coins earned by playing the games to unlock special bonuses like art, music, and movies including the Sonic 30th anniversary concert and every episode of Sonic Mania Adventures. Finally, Mission contains two options: Story Mode, which has you run through each game in sequential order as Sonic, and Mission Mode, a selection of challenges for each game created for this collection. I don’t find these missions to be particularly enjoyable, so let’s just move on to the games themselves, which I played in Story Mode unless otherwise specified. 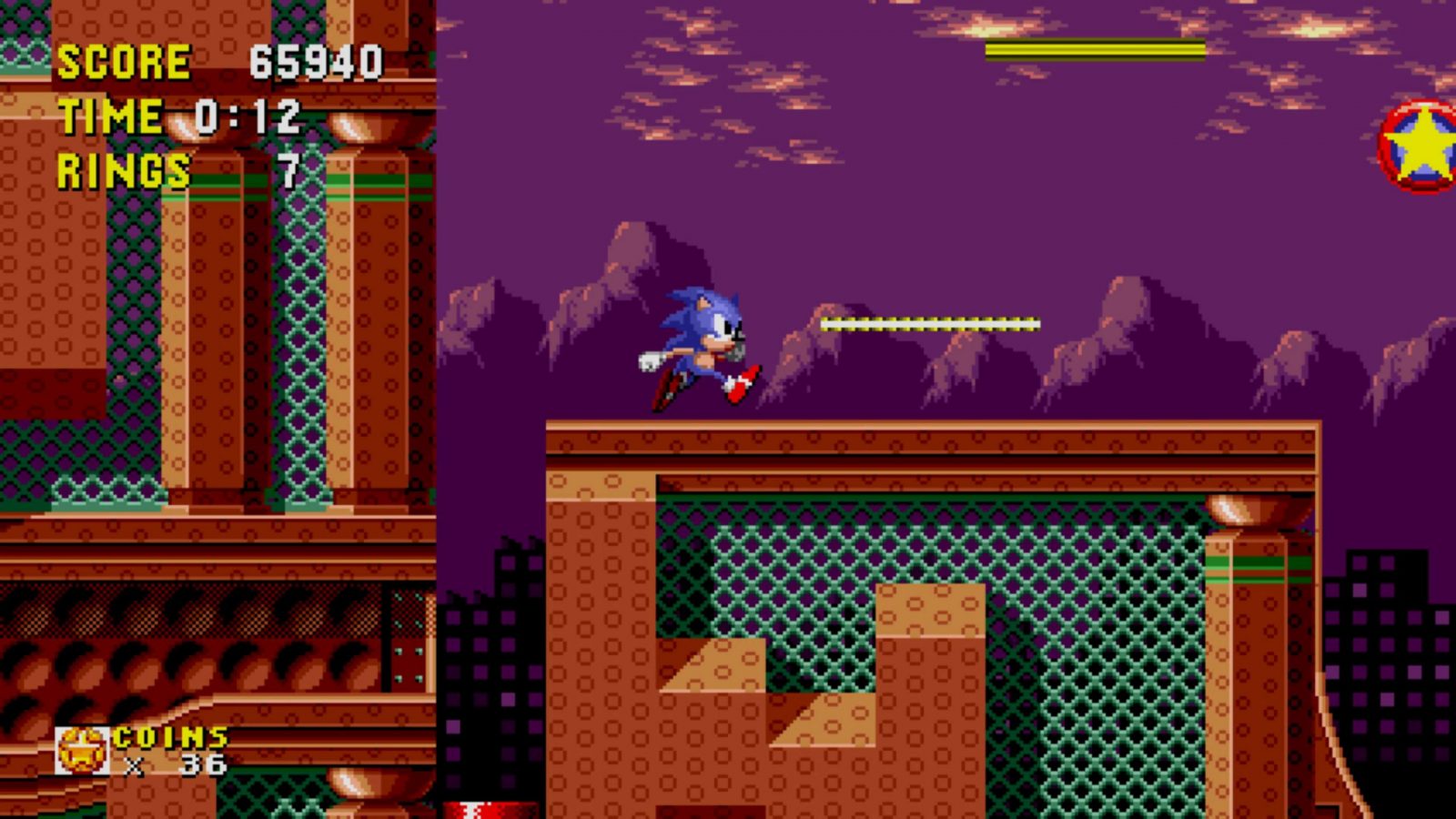 In Sonic the Hedgehog, you can now choose from three playable characters: Sonic, Tails, and Knuckles. I played as Sonic and… well, the game hasn’t aged well to be honest. After Marble Zone the game just becomes incredibly mean with its traps that you just can’t see coming. This game is more focused on platforming than any of the others, and the often cheap level design just makes that unfun. This was the first time I had played this to completion in quite a long time and, while I knew the special stages always sucked, I went in with pretty fond memories that were just crushed by this replay. Unlimited lives helps the situation tremendously, but I find this title in particular suffers from a lack of rewind or quicksaves as seen in previous re-releases.

Sonic CD is likewise focused on platforming, but it’s twist on exploration makes it a lot more fun. Granted, CD still has its fair share of problems, in particular having to find Past signs to travel back in time then find the generator in every single stage to get the good ending, but I mostly enjoyed my time with it. Playing as Tails makes exploring a whole lot easier, though for some reason you can’t play as Knuckles here even though he would be a perfect fit for the level design. This version also has most if not all the features included in the PC version, such as both JP and US soundtracks (the former is way better, but the US intro Sonic Boom cannot be beat) and the D.A. Garden as an unlockable along with other things. 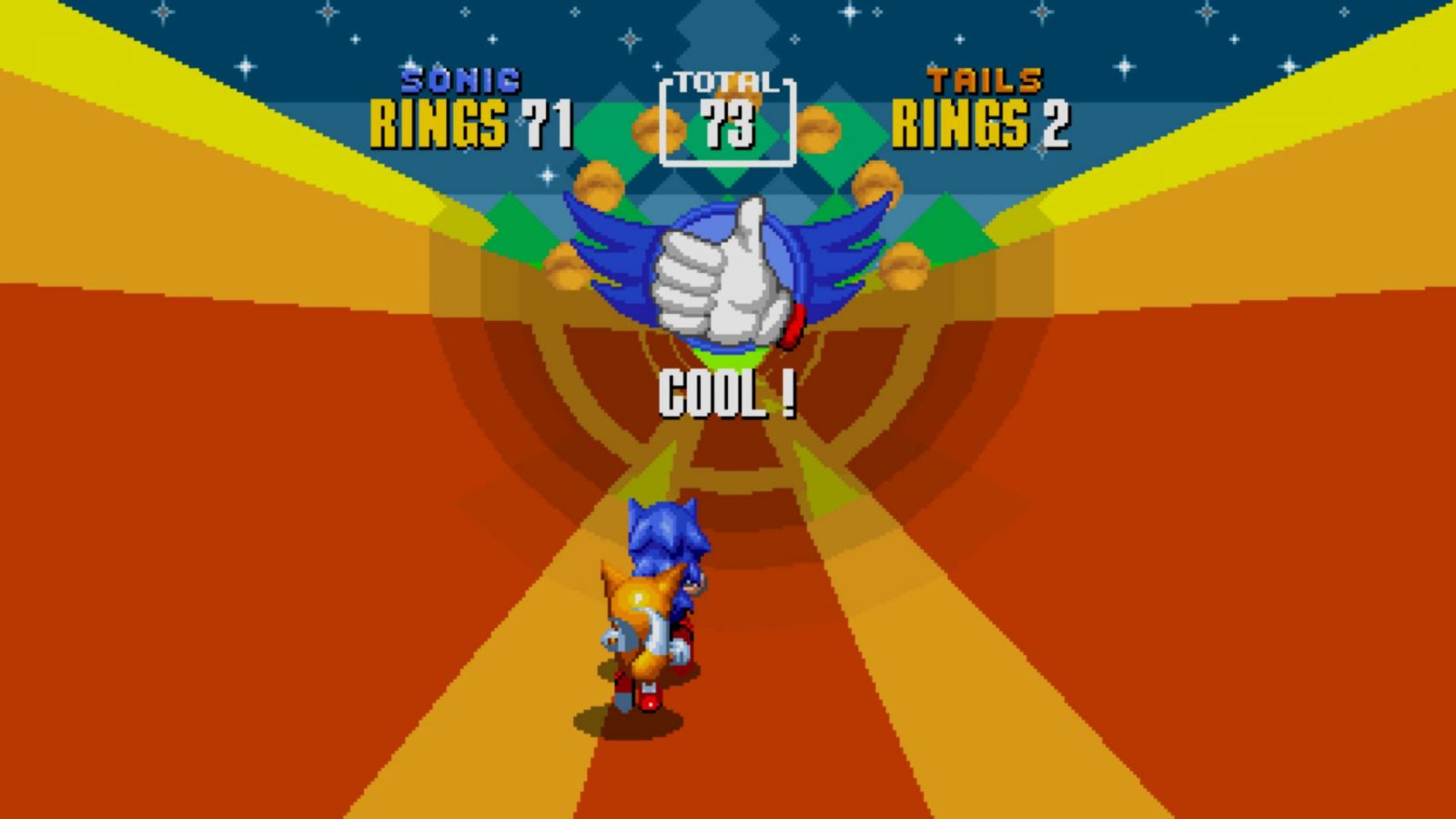 This game is where some oddities in this collection pop up, particularly in navigating each game’s menus and settings. You see, selecting Continue from the Origins menu will load you right into the game with your most recent file, but if you want to adjust any settings you have to select New. It’s not a huge issue and the convenience of Continue is nice, but the labels are a bit misleading.

Sonic 2 is where things became a bit more focused on speed and maintaining your momentum though platforming sections. It largely succeeds at this, though some infuriating design decisions still remain like the final boss giving you no rings and thus requiring you to complete it without getting hit. This is just super frustrating in this day and age, and does make me wish Anniversary Mode went further with changes other than the visuals and drop dash. SImply adding one ring here would have gone a long way to making the game more fair and more fun for modern audiences. I’ve beaten these bosses on original hardware before, limited lives and all, but I have to say it’s a whole lot more fun and less stressful when you have a safety net of some rings or a quicksave so you don’t have to fight Silver Sonic for the 20th time before you can challenge the Death Egg Robot. 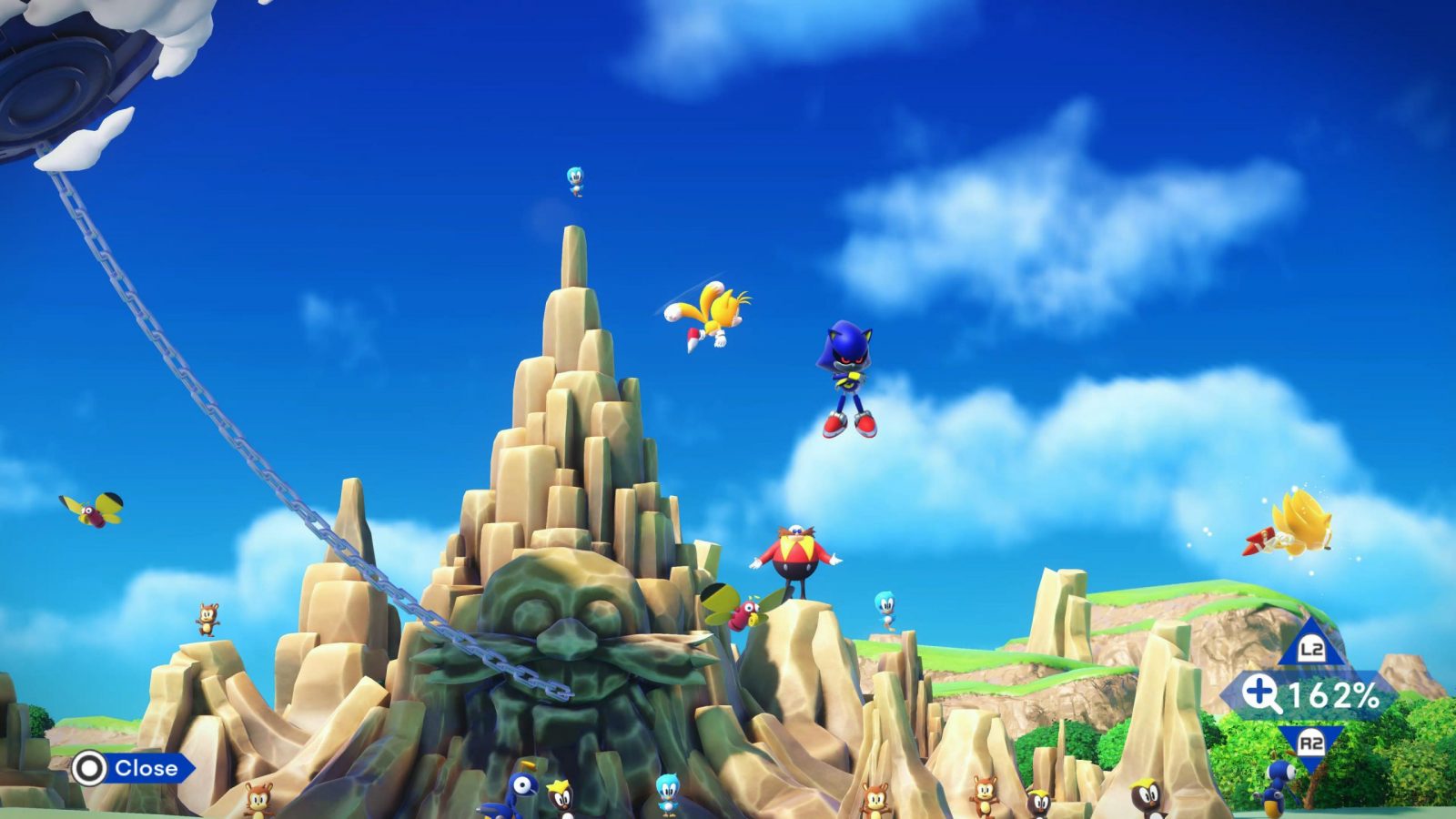 While Sonic CD had a severe lack of Knuckles, Sonic 2 adds him back in with the additional option of playing Knuckles accompanied by Tails. Again, it would have been nice to have all these options across all games, like being able to play as Tails accompanied by Sonic or Knuckles in the first game, but it’s still cool to have here. This does bring me to the weirdest issue of the collection – Tails’ AI in Sonic 2 is really bad, noticeably a downgrade from the original games. He’ll get himself stuck somewhere in pretty much every act and continually jump, making an annoying sound for the rest of the stage. He doesn’t teleport to you like he should, which is super weird, especially when he’s perfectly fine in Sonic 3 and Knuckles.

Sonic 3 and Knuckles is the final game in this collection, though I guess you could say it’s two games. I’ll continue to refer to it as a single game here, since you can’t separate the two and they were conceptualized as a single title anyways. This is where 2D Sonic design and gameplay hit its peak, with only Mania arguably unseating it. All three playable characters have unique ways of traversing levels. Tails can fly and Knuckles can glide and climb walls, but Sonic now has access to three elemental shields that allow him to bounce, double jump, and dash in the air. Even without those, you can tap the jump button in the air to hit foes with the Insta-Shield and even continue to hold the button for the Drop Dash. This game just feels good to play too, with well telegraphed obstacles and tons of paths to choose from. 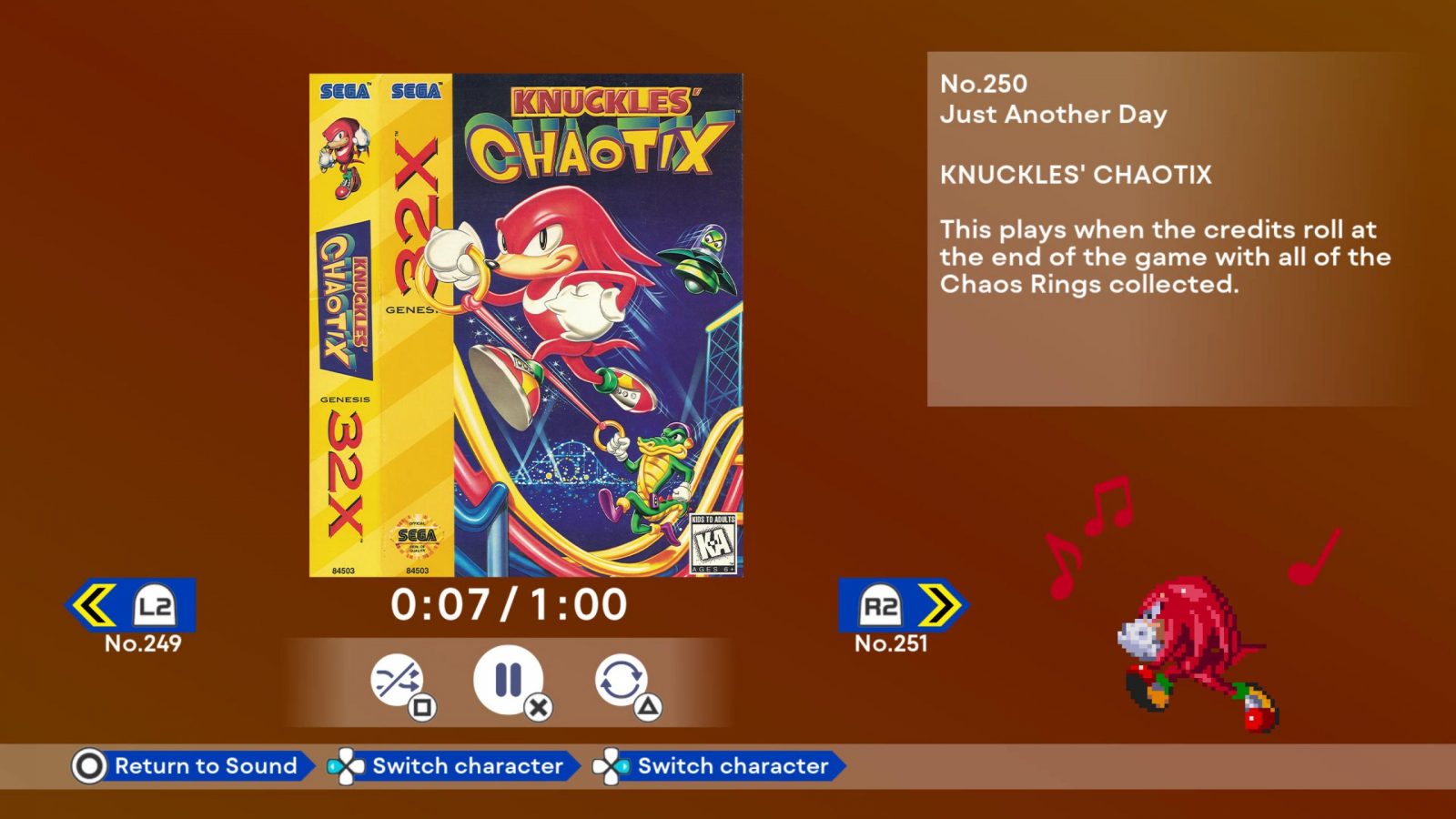 While it’s by far the best in the collection, Sonic 3 comes with the biggest drawback. As has long been rumored, several of the songs in the game were indeed composed by Michael Jackson. For whatever reason, all of those songs have now been replaced and the game just isn’t the same without them. In particular, the new Knuckles’ Theme just doesn’t have the same energy as the King of Pop’s version. The new tracks aren’t bad or anything, but the original soundtrack was part of what gave Sonic 3 this unique energy that just can’t be replicated. I’m sure PC users have modded MJ’s tunes back into the game already, but console players just have to live with this inferior version.

Sonic Origins presents the (almost) best versions of the classic Sonic games, though I can’t help but feel it could have used more gameplay additions. I’ve already mentioned quicksaves, design changes, and a rewind function, but other things like a playable Amy (please, I beg of you SEGA, give our girl the spotlight she deserves) would have elevated this collection. Still, having these games in proper widescreen along with a ton of extras like animations and old art is well worth the price of admission for fans of the Blue Blur.

Sonic Origins review — The past never looked so bright

While it’s not quite what I had hoped for, Sonic Origins is one of the best ways to play Sonic the Hedgehog, Sonic CD, Sonic 2, and Sonic 3 & Knuckles. The sprite art looks fantastic in widescreen and extras like animated cutscenes bookending each game are a delight.

David is the kind of person to wear his heart on his sleeve. He can find positives in anything, like this is a person who loved Star Fox Zero to death. You’ll see him playing all kinds of games: AAAs, Indies, game jam games, games of all genres, and writing about them! Here. On this website. When not writing or playing games, you can find David making music, games, or enjoying a good book. David’s favorite games include NieR: Automata, Mother 3, and Gravity Rush.
Related Articles: Sonic Origins
Share
Tweet
Share
Submit